I remember when we first arrived in the village; a couple of weeks later our two youngest girls started at the tiny local school, a pleasant five minute walk from our house, past the 12th Century Church, past the old Presbytery with its time-worn wrought iron gates and along the narrow winding lanes flanked by ancient stone cottages.

I remember standing alone at the school gates, a stranger and a foreigner amongst a sea of unfamiliar faces who were all acquainted with one another, all talking, sharing stories and snippets of gossip.

Annie was there to pick up her grandson, who was soon to become one of the girls’ best friends; Annie’s was the first friendly smile I ever saw at the village school gates.

One day I invited her to stay for a cup of tea whilst the children shared their afternoon goûter, and slowly our friendship built. We always have much to talk about for she is a fountain of all knowledge. She has helped me in the garden, advised no end with the chickens, produced antidotes to ailments and put one poor bird out of its misery for us when we first arrived.

She has given me endless cuttings from her own garden. The papyrus in the pond was a tiny plant which she gave us in the depths of the winter. We were away skiing and it was Annie who let our chickens out each morning and shut them in again at night. When we returned there was a small selection of plants in the shade, gifts from her garden. The papyrus was one of them. 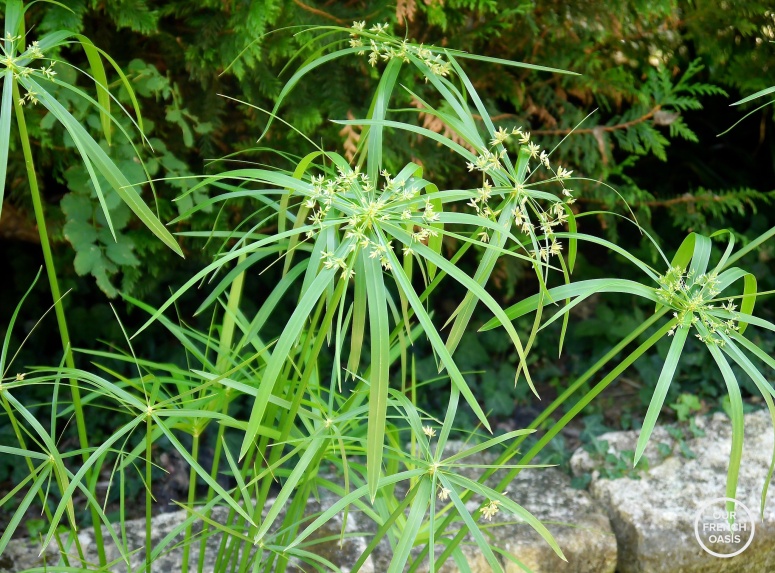 She is probably one of the kindest, nicest people I have ever met.

Over time we have also got to know her husband, Jean Francois, an equally fascinating man. He has patiently showed us how to prune our vines in the winter, how to prune them in the spring and how to keep them in check all summer. He also is a fountain of knowledge of all things in the potager and a master-electrician who once solved our long-standing hot water problem within a minute of being shown the fuse-panel.

Yesterday they came for tea. 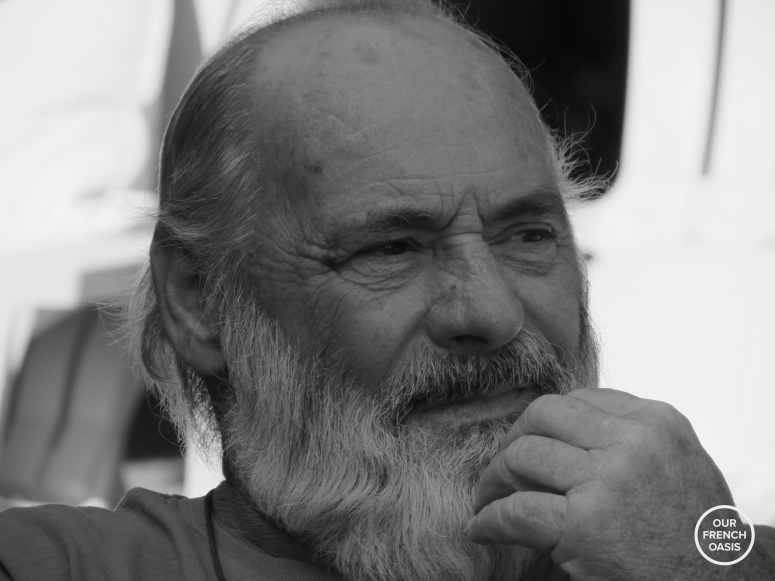 As it is the school holidays we hadn’t seen them for a while, they have had family staying and everyone has been busy; it was fun to catch up with their news. 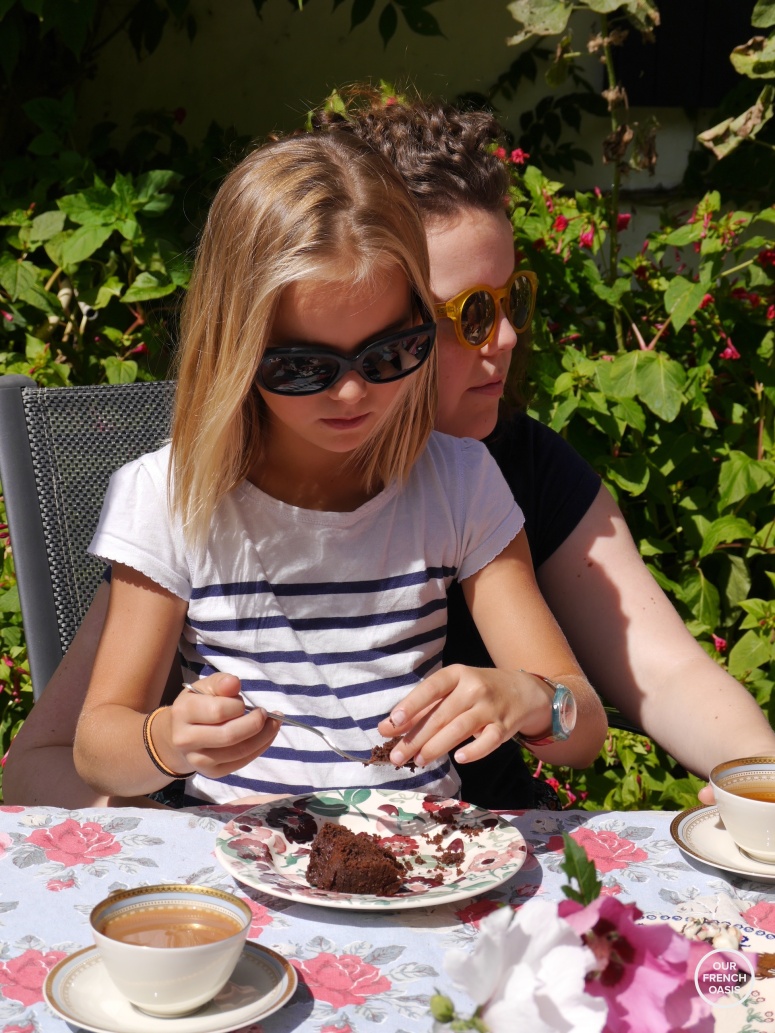 The girls love to cook. Gigi made a chocolate cake, without any help. I thought it was  pretty impressive for a nine year-old, but she does know the recipe off by heart. She measures out her flour, sugar, butter and cocoa powder, she’s an ace at cracking eggs and has become quite proficient at making a simple chocolate buttercream icing.

There is something terribly civilised about sitting down with a cup of tea. Looking back we always had tea in my childhood, at school and at home; and my father would always come in at 5 o’clock from whatever he was doing on the farm. In one form or another, tea is a daily occurrence here. Sometimes it’s quite literally just that, a cup of tea whilst the children enjoy their afternoon snack; at other times, it’s a deliciously decadent pause during a busy day to spend an hour or so with friends, enjoying the weather and each other’s company. 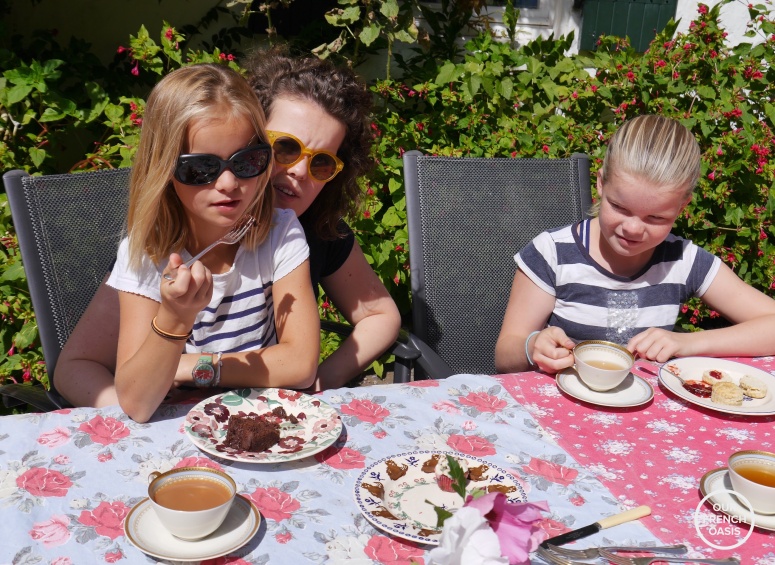 I often make scones because everyone adores them, especially the French! They are very quick and very simple and it’s a recipe I have used for ever.

Take 80zs of flour, 1 tsp of baking powder, and 2ozs of salted butter. Crumble everything together with your fingers until it resembles fine breadcrumbs. Add some milk a little at a time until the dough holds together without being sticky. Roll out the dough on a floured surface with a rolling-pin until it is about 1/2 inch thick. Cut into rounds, I use a 1.5inch cutter. Brush with a little beaten egg and bake at 220C/425F for approximately 15 minutes. Many people add sugar to scones but I don’t! I like them better this way and strangely so do the children. Often they cut them in half and add some jam which is more than sweet enough, and Hetty and Roddy love them with a little cheese too.  This recipe will make approximately 12 scones.

Hetty, another budding young chef, made miniature marbled chocolate & vanilla cupcakes and then iced half of them, leaving the others plain.

In the afternoon we took the dogs for a walk and picked the first of the season’s blackberries on our usual route behind the house. We intended to bring some home to add to our tea, but there weren’t enough ripe yet and so with purple tongues from a mini feast we returned empty-handed. 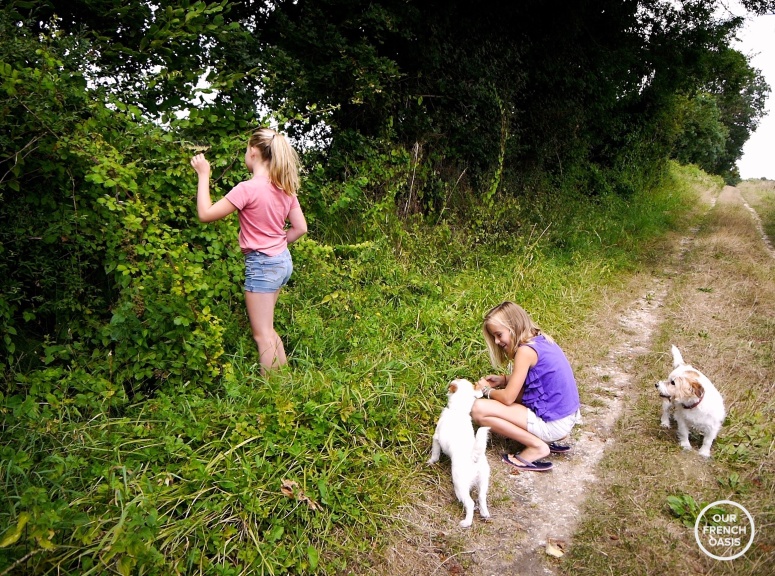 Izzi made her signature chocolate truffle-balls. These are rich and powerful but amazingly they’re also very good for you. Ok, I am sure you don’t believe me,  but let me tell you what they are made of.

2 cups of nuts (you can choose your preference, hazelnuts and almonds are her preference), 1 cup of dates (de-stoned), 1/4 cup of coconut oil, and 1/2 cup of pure cocoa powder

Blend everything together in a food-processor. Shape the mix into balls and roll in unsweetened natural shredded coconut or in cocoa powder. Chill for at least half an hour and store them in the fridge. They will keep for several days. They do need to be served really cold.

I have made these for friends visiting from Florida, and Izzi has made these for various dinner parties; everyone is smitten. We tend to always have some in the fridge as they are my after-dinner indulgence! Gigi takes a couple to tennis tournaments where she eats one or two between and during matches; they’re much much better than any shop-bought sugar-laden energy boost. I urge you to make them and try them, you will be amazed. They are sweet and delicious. Our family, children included, are somewhat addicted!

There is never anything formal about tea here, it would take away the relaxed atomsphere. I’m not looking for perfection, merely simple enjoyment. 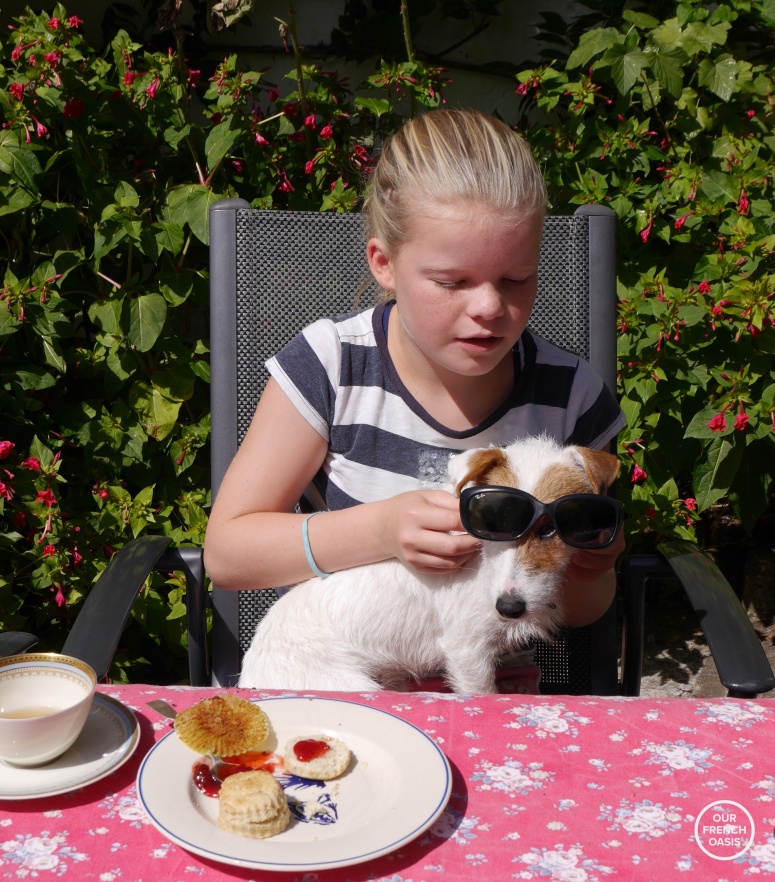 Yesterday Evie thought she might join in, but when she was banished from the table, she and Bentley patiently waited underneath, just in case a crumb should fall.

The backdrop of the house makes the perfect setting without anyone having to do anything; with the mass of yellow and red mirabilis and the wisteria flowering for the second time this year we don’t need to add much more. 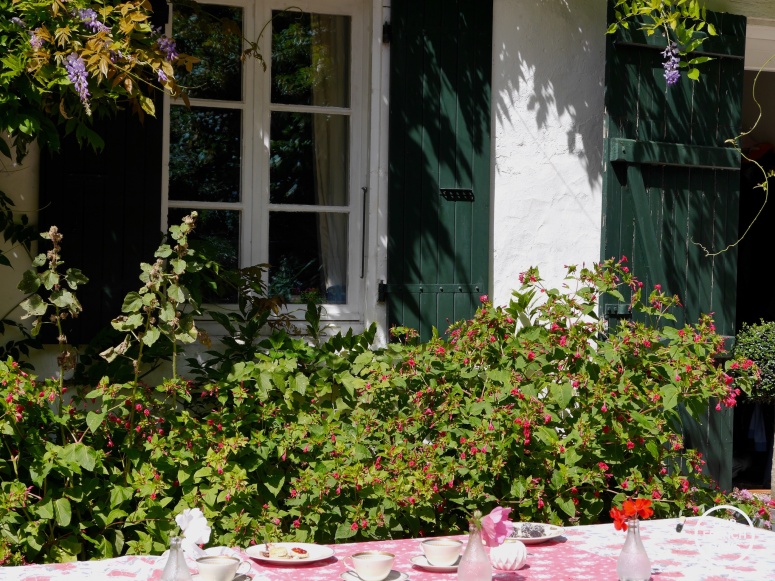 We put a couple of stems of cut hibiscus in an old bottle.

Undisturbed a wasp helped himself to leftovers. 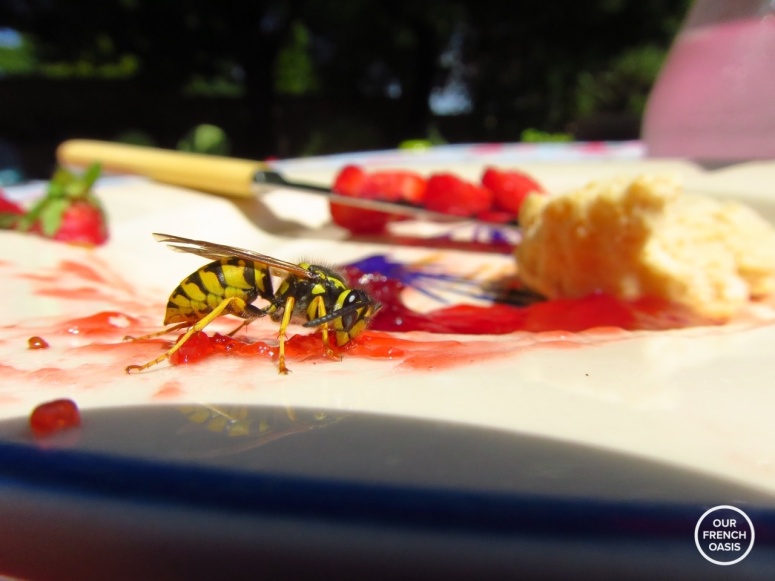 Re-energised the children had slipped away to enjoy the pool. Half listening to them whooping in delight in the crystal clear water our conversation continued, we discussed the fungus that has attacked their vines. We talked about the Vendée, the department to the north of us and how different it is to the Charente Maritime. Of course we talked about the weather; Annie said summers are cooler than they used to be, while Jean Francois said they are much hotter! We chatted about children, the amount of Dutch tourists in the area, cooking, food, chicks and chickens, the pool, the problem we all seem to have keeping basil plants alive, you name it, we probably talked about it, just as friends do. An unhurried hour with great company, exactly as it should be. 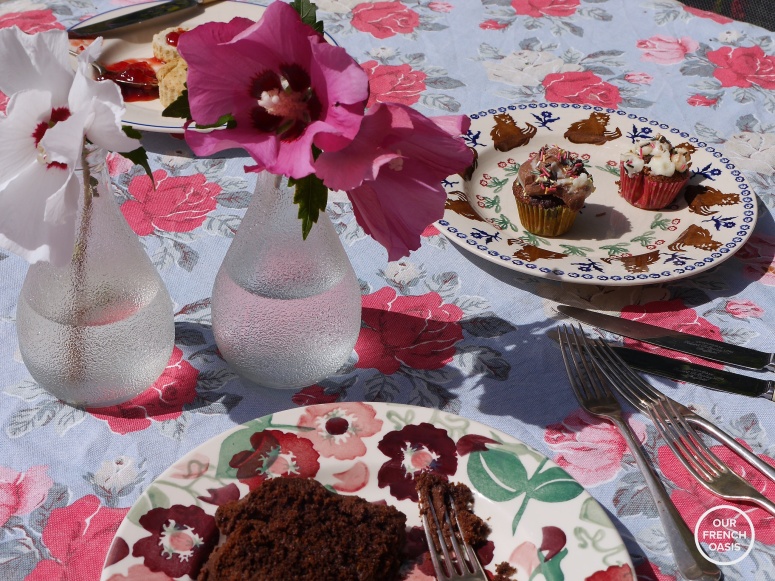