There is a place where the land, the sea and the mountains are one. A place that gets its name from the Atlantic Ocean and the Pyrenean range. It’s a department bordering Spain and home to the Béarn and Basque country. Welcome to the Pyrénées Atlantique.

Rarely do we go away in the summer. These are the months when the Charente Maritime is utter perfection. Right now the weather is gorgeous, the pool is warm, almost at a hot tub temperature. The living is easy and there is no reason to leave.

But very occasionally a change of scenery for the weekend does us the power of good and I decided to conduct a little experiment to see what it feels like to go the opposite way in an increasingly connected world. I was going on a digital detox for 72 hours. I needed to give up the internet; no electronics, and no checking the mobile phone for emails. No flicking through Facebook or Instagram.

In a world where we’re so used to being constantly connected, this can be surprisingly difficult to do, and it was harder than I imagined. Whether stopping for a coffee or relaxing on the beach, I always have a quick check of my emails; it’s a habit. During my ‘experiment’ I have to admit I did allow myself to keep my mobile phone with me. Not with the intention of using it for the internet, because I didn’t and I switched off the data: but I kept the phone turned on for calls, just in case. Jack is away camping with his best friend and their family, 800 kms away in the Ardèche and he’s only 14, soI had to know he could contact me if he needed to. That was my only exception.

The problem with working from home and with an internet-based business is we never truly go on holiday. Gone are the days when I left the office the night before a vacation, not to think about work again for two weeks; now work comes with us, and it’s the same old circus but just in a different tent. The first half-day I mentally reached for my phone several times, but then it got easier and easier.

As the landscape changed during our 350kms journey south I forgot about my phone altogether.  We swapped the flat marais and the sand dunes of our home landscape for a rugged coastline and cliffs. The pale Charentais stone buildings of our home department gave way to a totally different style of architecture where white houses with red shutters dominate. The dark red was originally produced by coating the timber with ox blood, a coating reputed to protect the wood from insects and rot.

We were in Basque country, possibly the most engrossing region of France. It is bewitchingly beautiful; the land stretches up to the Pyrenees from a battered coast, a development of gentle lush green hills that ends abruptly with harsh intimidating peaks. 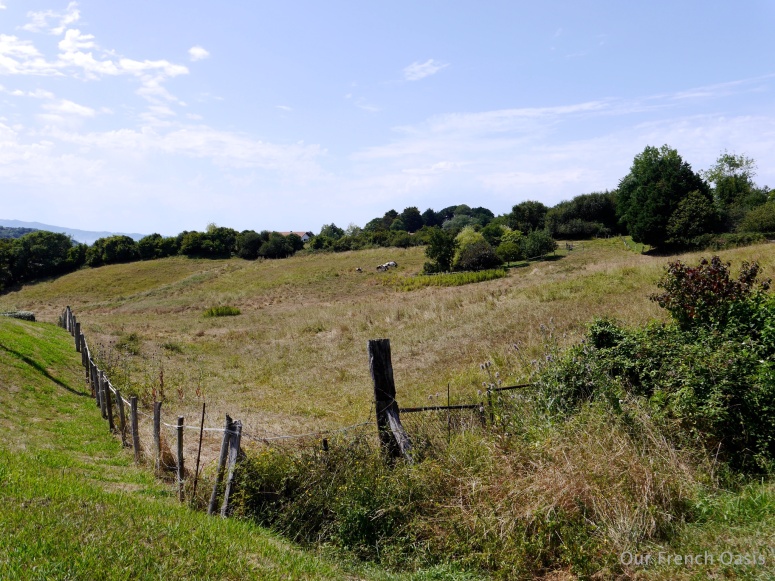 Sandwiched between the brilliant blue Bay of Biscay and the craggy foothills of the Pyrenees, the Pays Basque feels one step removed from the rest of France – which is hardly surprising, since it’s been an independent nation for much of its history, and has more in common with the nearby Basque regions of Spain. Proud, independent and fiery, the people of the Basque Country are fiercely protective of their history and culture. The region has been inhabited since the Stone Age. The language is a pre-Indo-European language of prehistoric origin that has no connection to any other in the world.

The coastal town of Biarritz oozes old-money glamour. We know the area well.

But we headed further south and the cliffs became bigger and more powerful. We stopped in St Jean-de-Luz, a town with a whaling background; it’s a traditional seaside community in the sense that one can buy an ice-cream, but it’s not so developed that you are overwhelmed by blow-up whales and plastic toys. 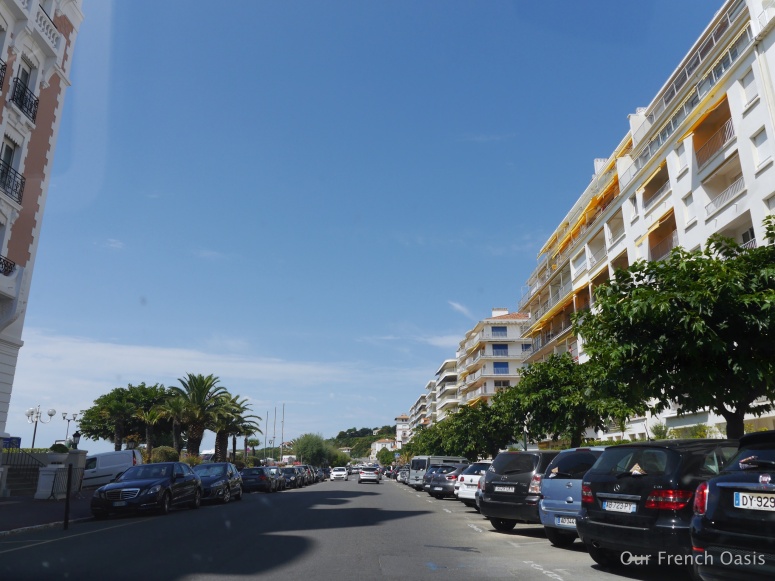 We wanted to swim, but we didn’t want the crowds and so we took the coast road southwards again, seeking out a quieter less populated stretch of sand.

We found the perfect spot

and parked at a precarious angle on a steep grass verge beside the road and then we walked, down through the trees, down hundreds of man made steps

to the most perfect beach. We scrambled over rocks and then we swam, the water was crystal clear and after the initial shock surprisingly warm, but with temperatures soaring to 39C/102F on land, anything was a fantastic respite from the heat. 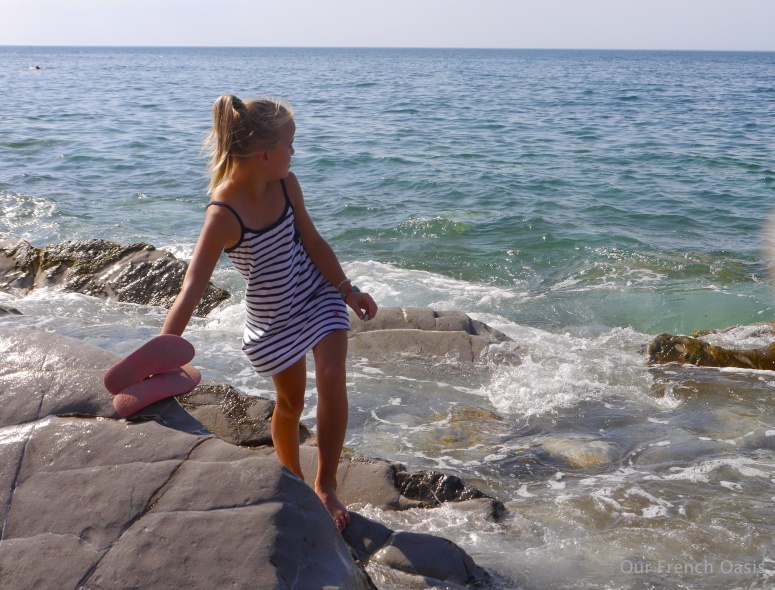 Perhaps the  loveliest stretch was the road from here to Hendaye.

Hendaye is a French town located right on the border with Spain, just on the other side of the river from Hondarribia. It’s the most south-westerly town in France. Its location has made it an important point for commerce between both Spain and France. Historically speaking, this has also proven to be problematic for the town since it has been involved in every conflict between the two countries, but at the beginning of the 20th century the tension between Spain and France slowly subsided and now probably only exists in sporting contests! 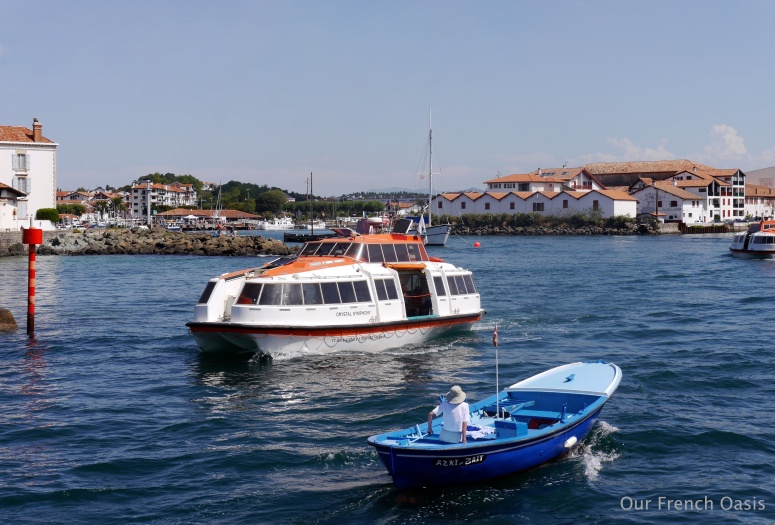 And then we drove just a little bit further, around the bay

and into Spain; this had turned into quite an unplanned trip, and we just happened to find ourselves inadvertently in another country! 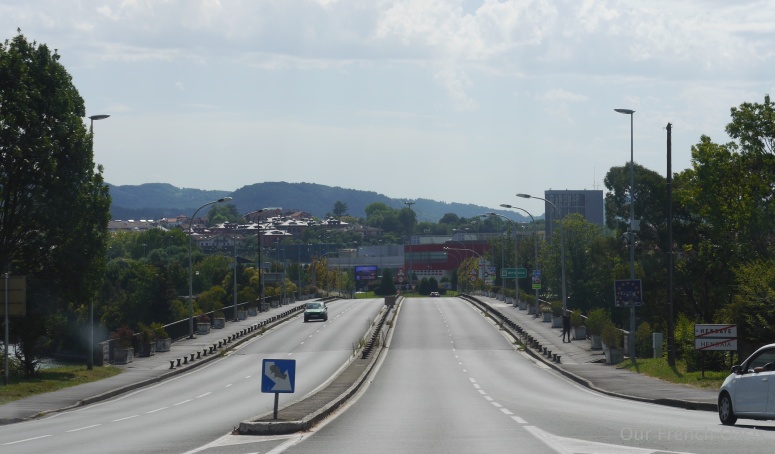 When we returned to France we headed inland, away from the coast and up into the mountains. The roads narrowed and became barely wide enough for a shepherd with a sheep, let alone a car. Basque country is treacherous for those with no head for heights. One minute you’re in a gentle valley marvelling at the scenery the next you’re rock climbing. 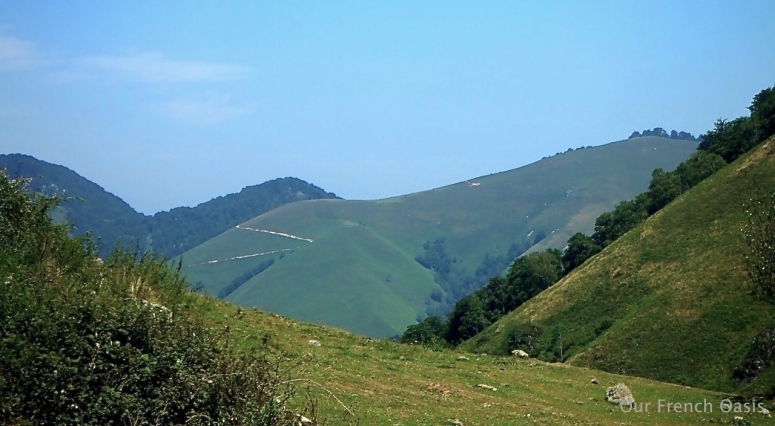 We passed through sleepy hilltop villages, and looking faraway to the left one could faintly see the Atlantic Ocean, its beaches populated by sunbathers and surfers. Straight ahead lie the greenest possible valleys – an area where civilisation blends seamlessly into the landscape, where the skyline is dominated by the barrier of peaks that form a natural division from Spain. The air is cool, blue and dotted with vultures and eagles. 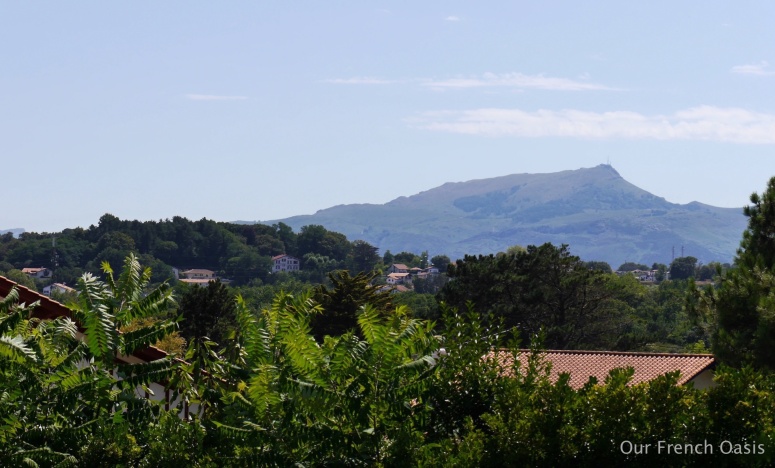 111 thoughts on “Detox in the Pyrenees Atlantique”