Searching through some old papers recently I found a letter. I sat there wondering if anyone wrote letters anymore apart from ‘thank-you’ notes, or is it a dying art? As I pondered this question the next day on my daily school-run with the children, I realised that as little as 20 years ago we would have written a letter and sent some photos to describe a holiday we’d had, for example, or a special occasion we’d enjoyed. This in turn led to me thinking about what letter I would write to you and which pictures I would include. Would it have been something like this, I wondered?

It’s been another terribly rushed week; why do the days seem to fly by so fast? I’m longing for more time, I have so much I want to achieve but never enough hours in the day to even begin half of the things I have planned, let alone finish the others!

The weather has really taken a turn for the worse, but it is November after all; traditionally  the wettest month of the year here in the Charente Maritime, so I shouldn’t be too surprised. But this week it’s gone from dry and chilly to damp and mild. One way or another we’ve had rain virtually every day this week, interspersed with brilliant sunshine. Sometimes they’ve been really heavy downpours and at other times just a light drizzle –  enough to turn my hair frizzy and to make the dogs eye up the terrace (when we open the door and suggest they go out) with some trepidation and exhibit an air of general reluctance to leave the warmth of the kitchen.

As you know we’ve had Hetty’s birthday this week,  which was great fun. I finally got to use the cake-stand I found at a little brocante stall beside the road last month. The cake has long since been finished but I couldn’t bear to put the stand away, out of sight; so I filled it with some of our citrus fruit and left it out proudly on display. Actually I’m not sure which I am most proud of –  the stand, or the lemons and limes, all picked from our own trees!

The persimmons are also ripening at last, the tree always looks so incongruent, its branches quite devoid of leaves but drooping with the weight of heavy golden maturing fruit. I’m still trying to persuade all of the children that this is a fruit they should enjoy, “it’s one of the healthiest ones you can eat” I begin, but they give me ‘that’ look, the one that says they’ve heard it so many times before! But I will persevere; I admit the taste can be a little astringent at first and it takes one a little by surprise. But once you get used to it,  they are quite exquisite.

Oh, and I almost forgot to mention, our village committee has decided to hold open-houses for apéritifs over the Christmas period; Géraldine, a stalwart of village affairs, knocked on our door a couple of days ago and asked if we would like to participate. Roddy seemed unsure at first, but I think it’s a great idea. I love the thought of anything which adds to the festive spirit. I think my excitement was infectious as he’s already come round to my way of thinking.

Donned in wellies and raincoats we discovered a new dog-walk quite by chance. Both Bentley and Evie have had to make do with a quick half-hour around the block and a run in the garden for a while now, as we’ve been so busy. We decided a much overdue long stomp was needed and ended up in pastures completely new to us down in the Marais. There is nothing like a good hike to blow away the cobwebs and we returned refreshed and invigorated, and of course – it’s back to the routine of having to wash down the dogs when we get home, their paws and tummies are always caked in mud. 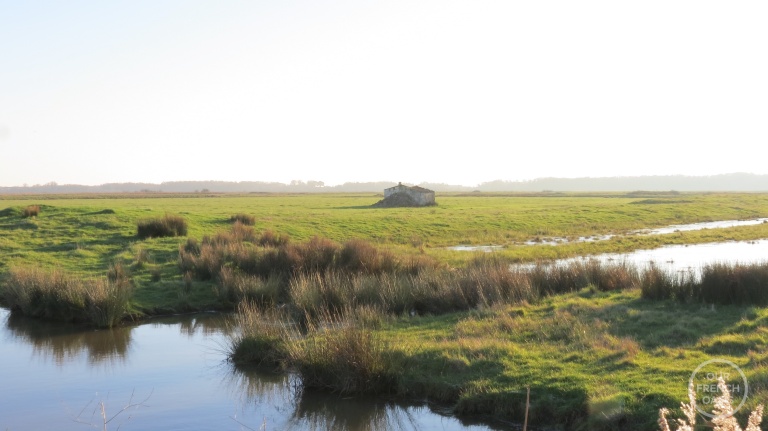 On Friday night we had friends to supper; it was a simple kitchen meal of baked chicken with sauté potatoes, roasted peppers and shallots drizzled in olive oil,  and a good helping of broccoli and carrots on the side. I made chocolate brownies for dessert, gooey on the inside and perfect with a little vanilla ice cream.

We’re under a weather alert for this weekend; it’s our first storm warning of the autumn and the winds are forecast to be in the region of 60 – 80 kph with higher gusts. But there is always an upside to everything. With the threat of gales over our heads we spent a few hours tidying up the garden on Friday morning, putting away chairs and the remaining remnants of the summer. It was actually remarkably calm and we even had a few sightings of the sun, but it was rather timid as it played hide and seek with the clouds.

Yesterday morning we awoke to blue skies and just a gentle breeze, I am wondering if MeteoFrance got it all wrong or if the weather gods were just teasing us as is their wont. We made a last minute decision to head two and a half hours inland to Limoges for the Women’s Open Tennis World Tour semi-finals and by chance we got front row seats. The landscape changed quite dramatically and we were treated to the site of cranes flying south on their annual migration; Gigi snapped a photo out of the window as we raced along! 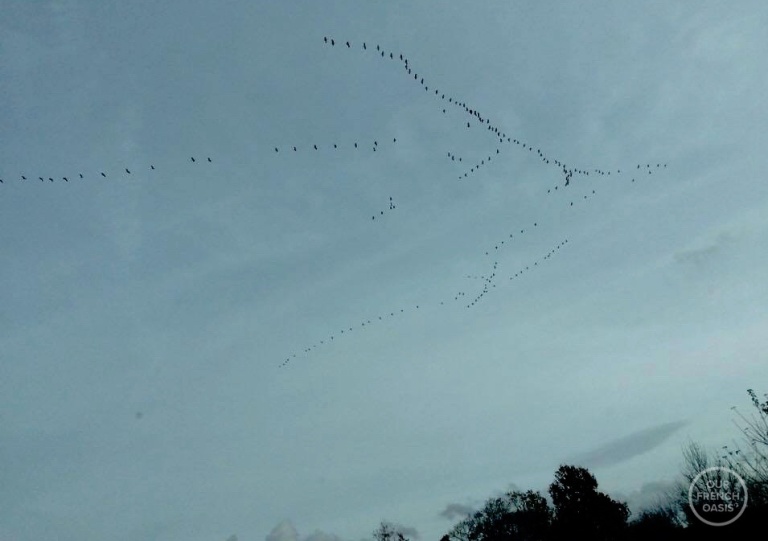 Alas this morning the skies were grey and the wind was howling; I was awoken early by two sounds, the half-closed shutters rattling on their hooks for all they were worth, and Gigi giggling in her bedroom next door. Surely that should be an alarm sound – the laughter not the shutters! There’s not much colour left in the garden, everywhere has taken on a distinctly wintery feel, but then it will be December in 11 days; I really need to get organised for the holidays now, before it all becomes a mad rush!

I’ve really enjoyed writing to you, it’s been a long time since I wrote a letter to a friend. I hope you have had a good week and are having a relaxed and happy weekend.