This time last year I chatted about our summer kitchen and I asked your advice about what to do with the ugly, falling down, insulated ceiling. You can read the post here if you missed it. You may also remember I promised you an update in a couple of months time.

Those of you who have followed me for a while now will remember the drama with Roddy’s foot and the dreaded septicaemia saga which also happened at this time last year. Naturally the summer kitchen renovations were put on hold along with everything else, and by the time he recovered and was able to return to the front-line in the garden there were other jobs with a higher priority rating to attend to; alas, the summer kitchen slipped down the list and was put on the back burner as summer progressed.

Over the past few months we’ve been busy little bees, further renovations here and there, and we also returned to the summer kitchen; as a result I thought I would finally bring you the much promised update, even if it is 13 months down the line!

To start with though, let me tell you what else we have done this winter. We started with the walled courtyard garden, which is predominantly ruled by the giant fig tree, still fruiting prolifically after a couple of centuries of sunshine. There is also a lovely grapevine along the west-facing wall but the little piece of lawn was scrubby and poor due to the vast dark canopy of the tree, and it always felt a bit of a mess. First we pruned the fig heavily; I suspect it had been left to its own devices for decades and when Roddy went up onto the garage roof to free the building from the tree’s embrace he found evidence of neglect in all directions. We then put the poor piece of lawn out of its misery and covered it in weed-matting followed by seven tonnes of traditional Charante calcaire gravel. We kept the original stone flower beds and Roddy artfully used some old paving stones to make some new ones in the gravel itself. I can’t wait until the virginia creeper is fully back in leaf around the open doorway and the fig tree and vine slide into full summer regalia. I think when the hollyhocks are in flower and the ferns have doubled in size it will look so pretty and be a much better place to lounge around in. A slew of shade-loving plants are on the cards for the north-facing wall and we’ll also be able to better see all fallen fruit and get rid of it, hopefully alleviating the asian hornets that always come to visit in September. 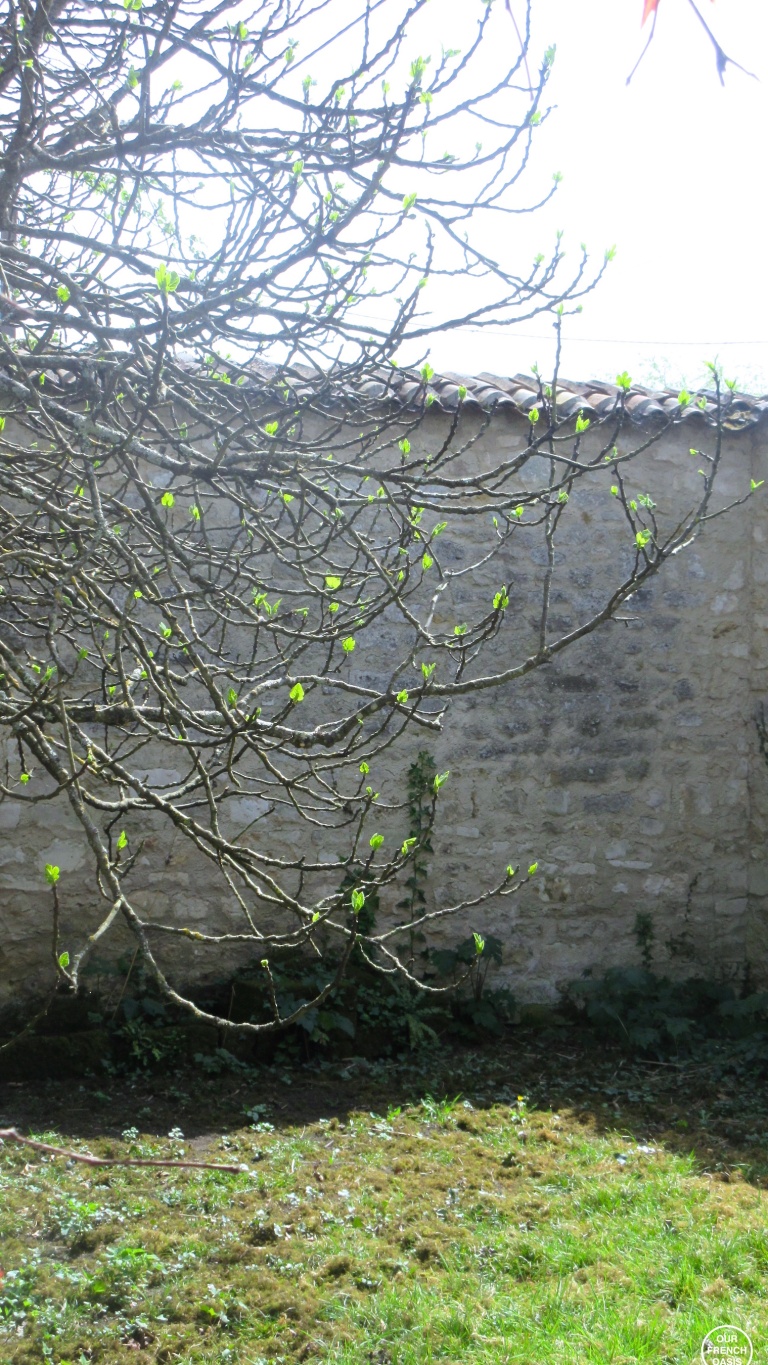 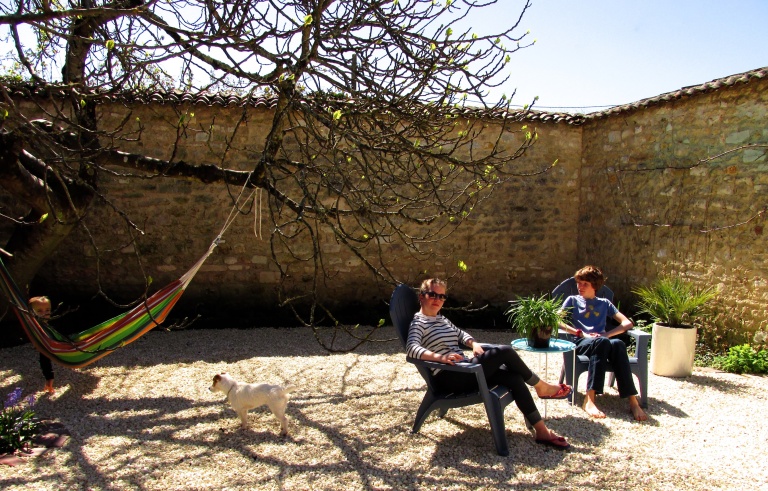 Another major job was the guest house bathroom. Although functional it really was stuck in the 1970’s and in dire need of a more modern look! We decided to retain the plumbing,  stone shower base and sanitary wear as it was all still perfectly useable and had a certain charm, but the tiles on the wall and floor HAD to go. I love the juxtapostion of old and new and we tried hard to retain some of the original features. One steps out of the french doors straight into the courtyard garden, which means in summer it is a wonderfully sun-lit little bathroom.

I also made use of the mirror I found in our attic a few weeks ago. Millie spent a day cleverly restoring it and it seems to have fallen into place like it had been waiting for a new life after all those dusty decades it spent crying in a corner.

But back to the summer kitchen; we thought long and hard about how to cover the insulation. There was much discussion about tongue and groove planking initially, which seemed to be the most popular solution. In the end though, we decided we would simply take out the insulation entirely as it was very old, and also falling down in so many places – it was always going to be a mess no matter what we tried to do. As Roddy and Jack took it down though, it revealed all sorts of interesting information. It had certainly been home to several families of mice (and I hate to say it, rats too) over the years, and there was plenty of evidence left behind which led Roddy to search hastily for gloves, masks and long-handled devices of various sorts! He did say that he thought they had long since departed the roof (perhaps thanks to Clara and Rory’s appearance when we moved in) but there were also huge amounts of cobwebs, and plenty of spiders, both dead and alive. It even appeared as if a squirrel had at one point made a home up there judging by the amount of walnuts we found. All in all I think it’s a very good thing it all came down; it was really rather unpleasant and extremely smelly. This autumn, we may install new modern insulation or we may leave it as it is; that’s something we can discuss over the summer. But for the time being it’s clean, and rodent/spider/bug free! Jack was really the star of the show; we turned it into his project and he worked like a demon up on the ladders peeling away the old stuff, even if there was the odd squeal as a spider landed on him! This is the remaining detritus, which is basically the loose mouse bedding!

Amongst the cobwebs and spiders  stacked on the ledge behind the insulation we also found these old tiles. We know absolutely nothing about them except they are over half an inch thick and each one is stamped with the maker’s mark on the back and a handwritten number. It seems as though they are part of a series or a large panel – I sense a little research is needed! 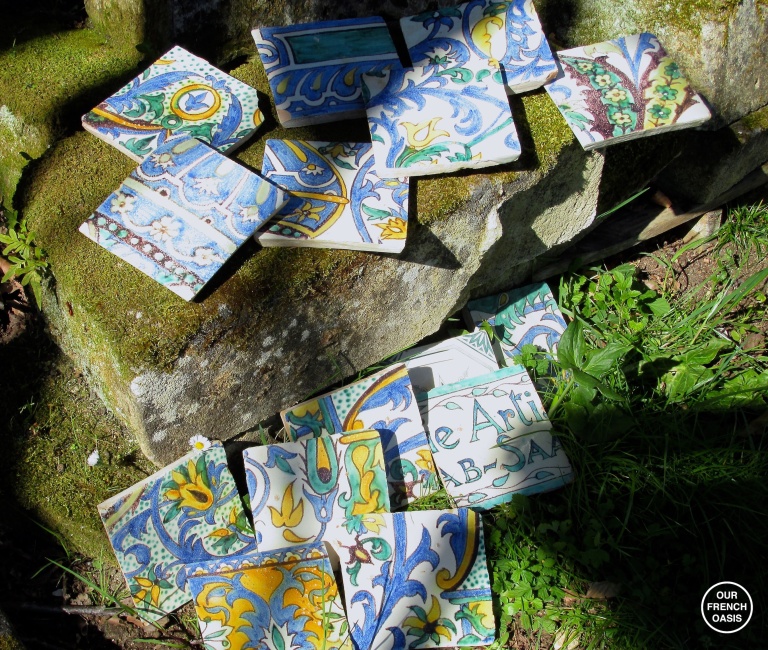 Just to give you a little reminder, this is what the summer kitchen looked liked before we removed the insulation, and this was a good part!

The final crowning moment which I was most excited about was when we hung the chandelier I bought at a brocante during the spring last year, specifically with this location in mind. 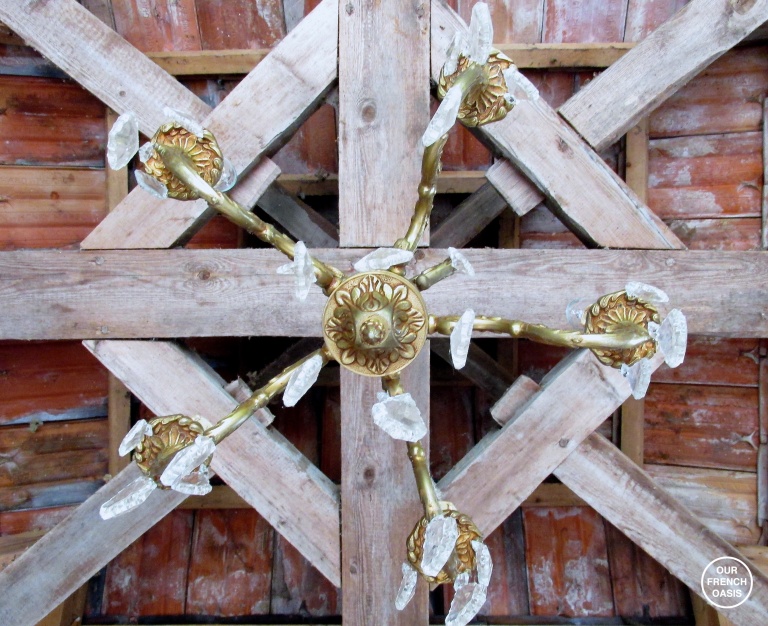 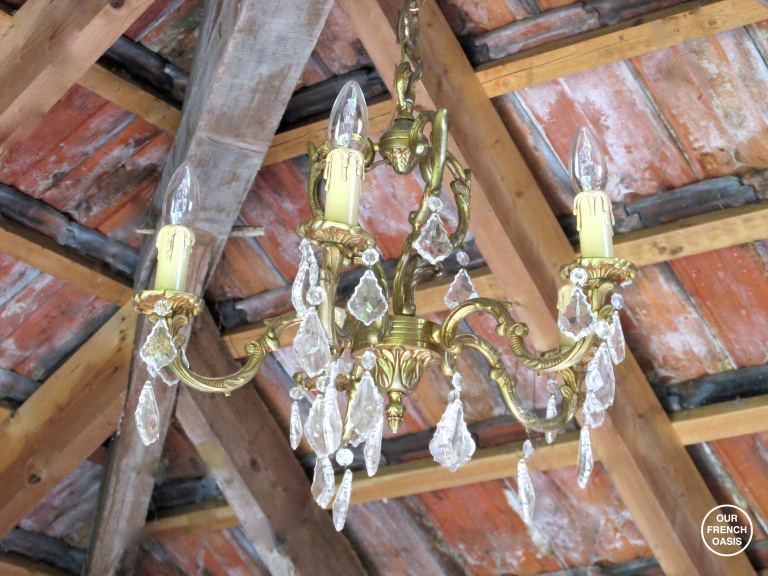 In addition to the interior work we also built a covered terrace at the front so we can leave the doors open. On the one side we have an old passion-fruit vine which I am training across under the roof, and on the other I have planted a climbing-rose which I am hoping will come across under the roof from the other direction and provide some lovely additional colour. The two lemon trees produced lots and lots of fruit last year, and it would appear they love the situation they’re in with full sun all day long, but with protection from cold winds and frost in the winter.

We’ve had so much fun in here already but now it is no longer home to the world’s largest collection of cobwebs and spiders I think we will use it even more; we’ve loaded up the basket with all the cuttings from the grapevines as they are perfect for using on the fire where we love to cook on warm evenings, and all the wood from the pruned fig-tree is also stacked away drying for next year – apparently it is excellent for smoking too.

When it all gets too crowded there’s still the old iron table and chairs around the corner under the white wisteria on the south-facing wall of the summer kitchen, and this is still one of my favourite spots in the garden! It’s sunny and warm at the moment, but in a month’s time when it gets much hotter, the leaves will be out on the overhanging ash tree and together with the wisteria it will provide a seasonal parasol of shade for thirsty gardeners! 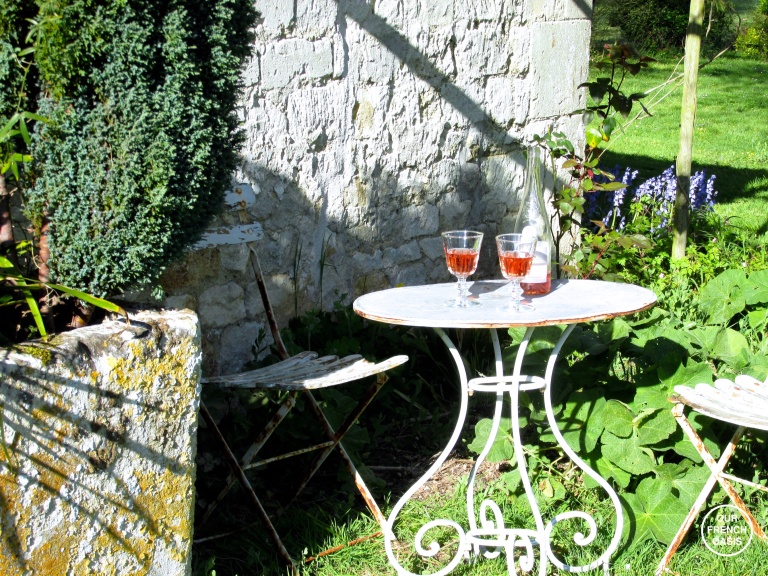 Still lots and lots more jobs to do, but slowly bit by bit we’re getting there and restoring our little 200 year-old corner of Charente Maritime history; it’s a project well worth taking our time over and I am loving sharing it with you. I think the wine may be finished when you come to visit though…

59 thoughts on “The Summer Kitchen Revisited”

Little streets away from the tourists in the south of France.
I can’t quite get enough of these little wild flower areas I’ve planted in the garden.
So pretty. Just passing through but I had to stop for a few minutes!
Just loving how cool and peaceful this room feels in these scorching temperatures.
About last night.
One of those stunning little hamlets where time just seems to pass very slowly, calmly and without any fuss 💗