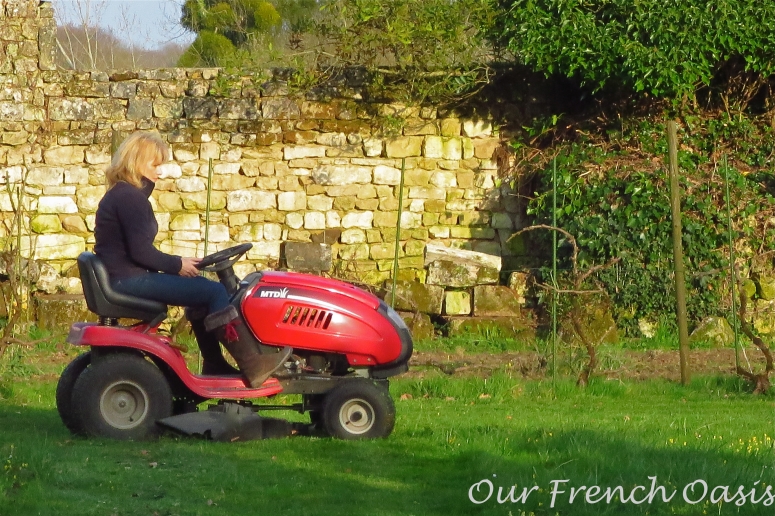 It’s that time of year when I am bursting with energy!  I have so many ideas for the garden, for the outbuildings, and for this and that, that there are never enough hours in the day nor enough hands to help. I have far too many projects on the go in my mind.  I want to be outside working on the vegetable garden, planting, sowing, and weeding.  I mowed the lawns for the first time this week, just a gentle little haircut but they look so much better.  I turned the mower off with just the smallest part left to cut, so I could hear what Mr H was saying to me as he passed, then I turned the key to get going again and nothing; the motor was silent, not even a cough or splutter.  We pushed it back under cover in the barn and now there is another job I have to do – to phone the local Gamm Vert (garden and farming supply store) and ask them to come out and have a look at it.  The annoying thing is they had only just returned it from it’s winter service with its blades sharpened, a new spark plug and raring to go!

Amongst my many projects is the summer kitchen and for this I would welcome your advice.

The summer kitchen was one of the things I fell in love with when I first saw the house.  It is a small little outbuilding dating from 1800, the same age as the main house.  It sits just a little way down the garden and used to be the original laundry.  It has two ancient stone troughs outside and in the summer the wisteria frames one wall and the climbing roses trail up another.  There are self-seeded hollyhocks growing in the corners and, just to make it perfect, an abundance of little wild strawberries grow outside the door. It couldn’t be a more perfect place to relax on warm sunny days. 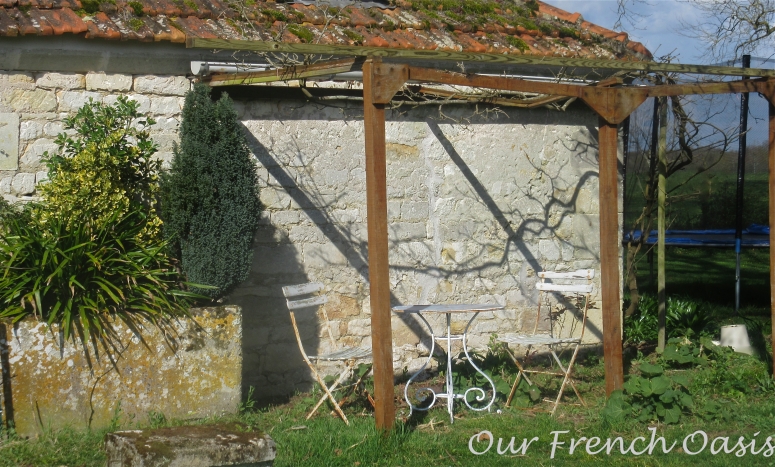 The family who lived here before us bought the house in the 1930’s.  They were from Paris; Monsieur was French and Madame was British, and this was to be their summer residence.  Alas, WWII broke out and they moved here permanently with their children as it was much safer than living in the capital. Monsieur did a lot of work for the French and British governments and the street on which the house stands is now named after him.  With the house, we purchased a couple of items of furniture, big heavy items that were difficult to move. One of these items was a desk; the desk at which so much of the important work that merited the naming of the street was written.  Mr H uses this very same desk today.  During the war years Monsieur spent much of his time away in London and the running of the house was left to Madame, she turned all of the land into kitchen gardens and orchards.

We actually bought the house from their grandson, now in his 60’s and also based in Paris.  He told us he can remember, as a child, his grandmother washing clothes in the summer kitchen every Monday.  When one looks closer at the little old building it is easy to see that it was indeed the laundry.  The vast well is right outside.  Inside there is the original lead pipework and huge wheel that drew the water up.  The wheel is no longer in use.  There is also an equally archaic tank which holds the water as it is drawn from the well.  The original electrics are still in place and were indeed being used when we bought the house; these were not even earthed, so we had the wiring completely replaced, with new sockets, new switches, new parts – all to be on the safe side!!!  However, the system is still the same; turn it on and wait for the pressure to build up in the tank, at which point you can then draw water.  This fabulous old system still feeds outdoor taps and a network of irrigation points for the garden. 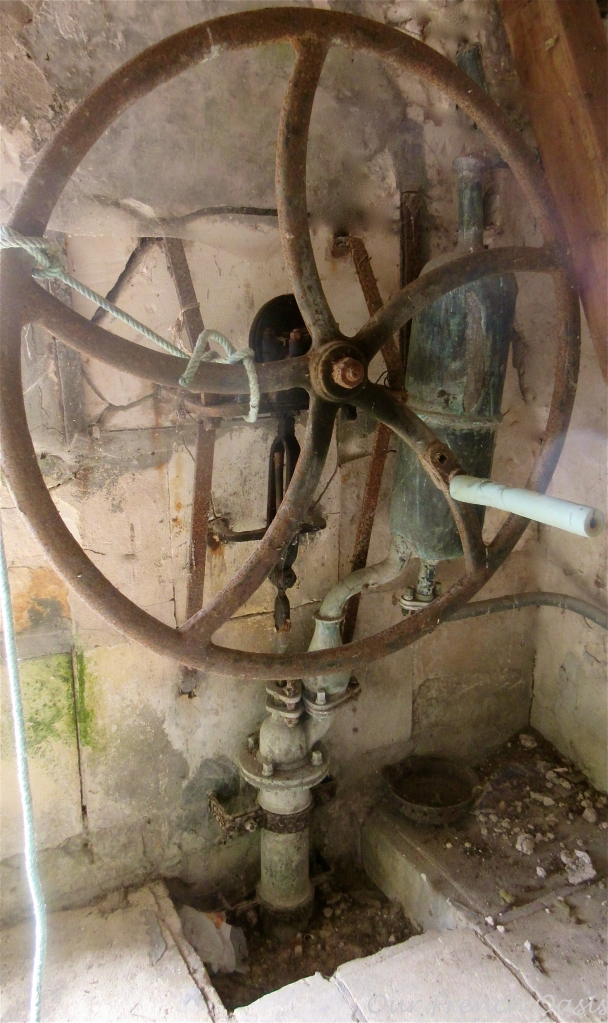 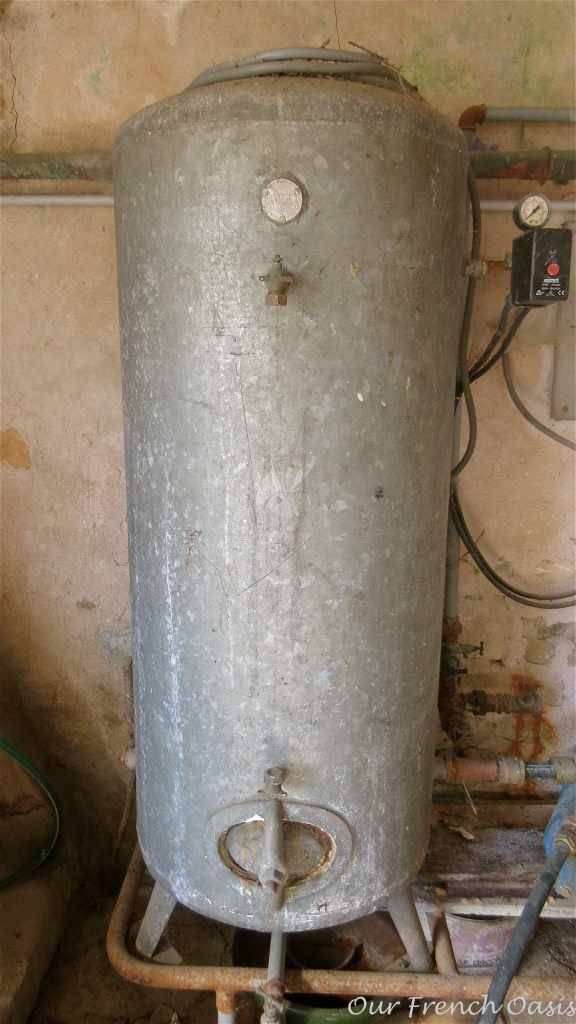 There is also a large open fireplace which was completely rebuilt a decade or so ago and which produces plenty of heat; of course this would have been vital for heating the water for washing clothes.  When it was rebuilt it was done so very much with outdoor summer cooking in mind, and was used every summer by the previous owners.  We did exactly the same last summer when we arrived while rebuilding the kitchen – it was very novel, spiders and all, though a tad inconvenient when the heavens opened! 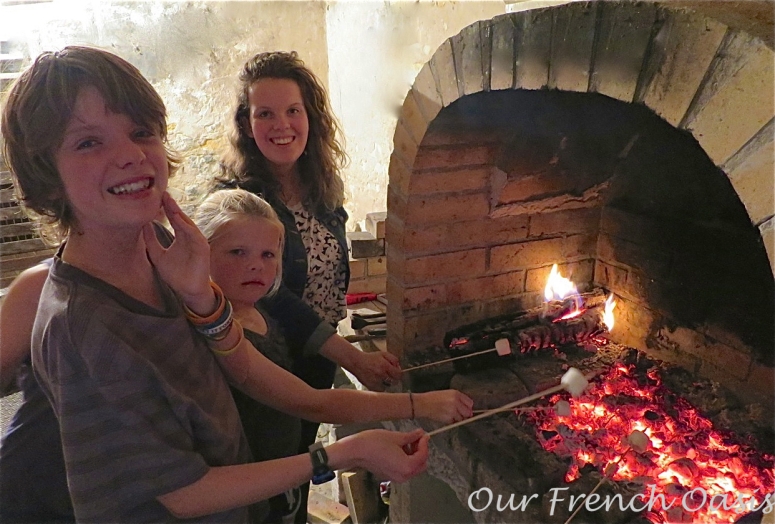 The old cobbles on the floor are the original stones, over 200 years old, they are utterly beautiful, worn smooth and polished from centuries of use.

The roof timbers have all been replaced but the builders kept the original style.  As we now have safe wiring and electrics in place I am on the hunt for a vintage, very simple chandelier to hang from the middle section.  Nothing elaborate or fancy, but we do need lighting, and I think this would be the most effective.

The ceiling, as you can see, has at some stage been insulated.  We need to cover this, but we are still not sure what with. We don’t want to add modern plasterboard or dry wall; it would look out of place. But we do need to do something to cover up the ugly insulation and to hold it in situ, and this is where I would love to hear your thoughts on just what to use; it has to be simple and in keeping with the building.  Likewise with the walls, would you paint or leave totally untouched?  At the moment my thoughts are to give the parts that are rough plastered a simple whitewash and leave the exposed stonework.  I would really welcome any comments you might have.

I hope in a couple of months I can share with you the finished summer kitchen, still keeping it’s old charm but very quietly tidied up. 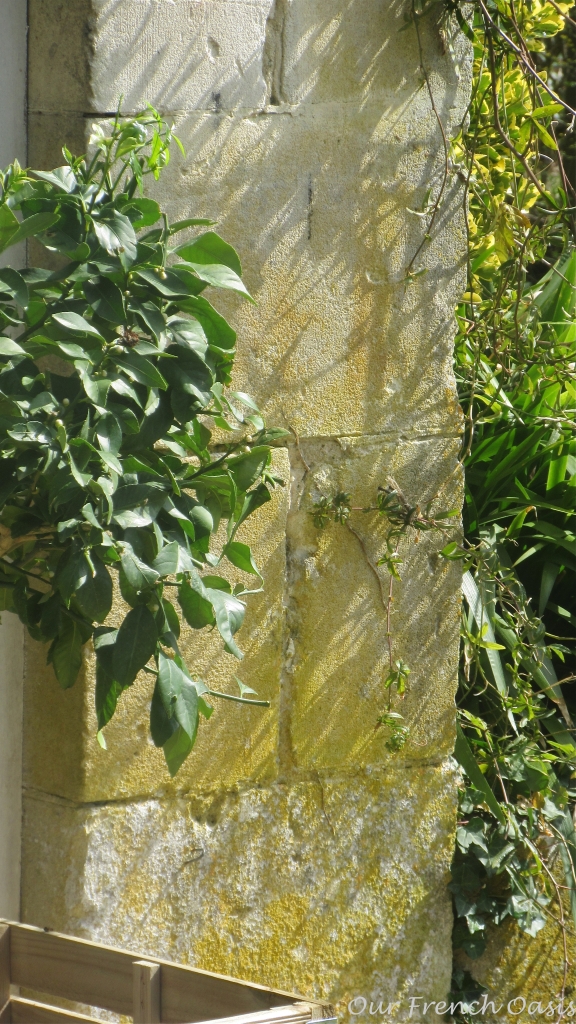 21 thoughts on “THE SUMMER KITCHEN, PAST AND PRESENT”