What secrets lie behind those closed doors? Where do all the tiny passages lead? Why not ditch the car and don some sneakers, forgo the heels (they are a nightmare on the old cobbles) and start exploring. The smallest doors in life sometimes lead to the most interesting of places!

I’ve always had an inquisitive mind, so when I see a little alley off to my side I always feel the need to take a quick duck to the left or right and explore. Friends I might be with will look around and realise I’ve disappeared, and somewhere close by I’ll be dashing here and there, never knowing what I might find. I’m a complete sap for the unexpected, and completely unable to pass by anything worth investigating. Most of all, I love the surprises that appear….

such as the incredible and irresistible mass of colour that was around this corner.

Another day took me around the old market hall in Mornac-sur-Seudre, it perfectly frames a house at one end. I could just imagine living there, walking just a few steps for fresh produce on Market Day, and being able to watch the hubbub of daily life without ever leaving one’s own front door. 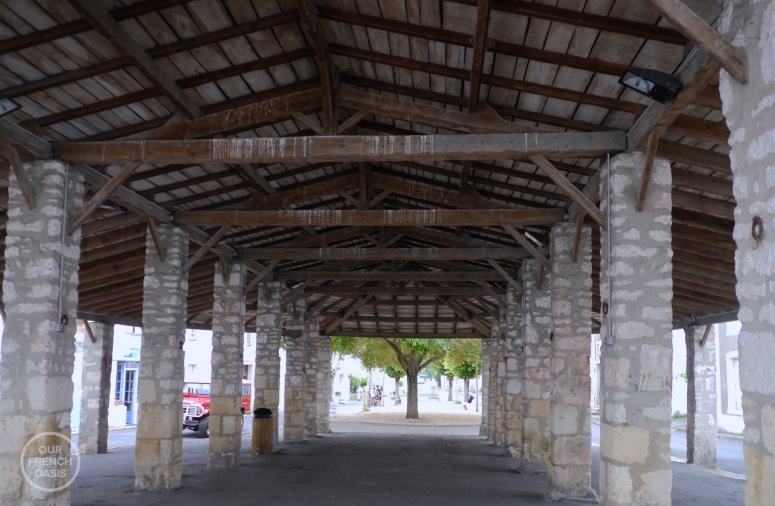 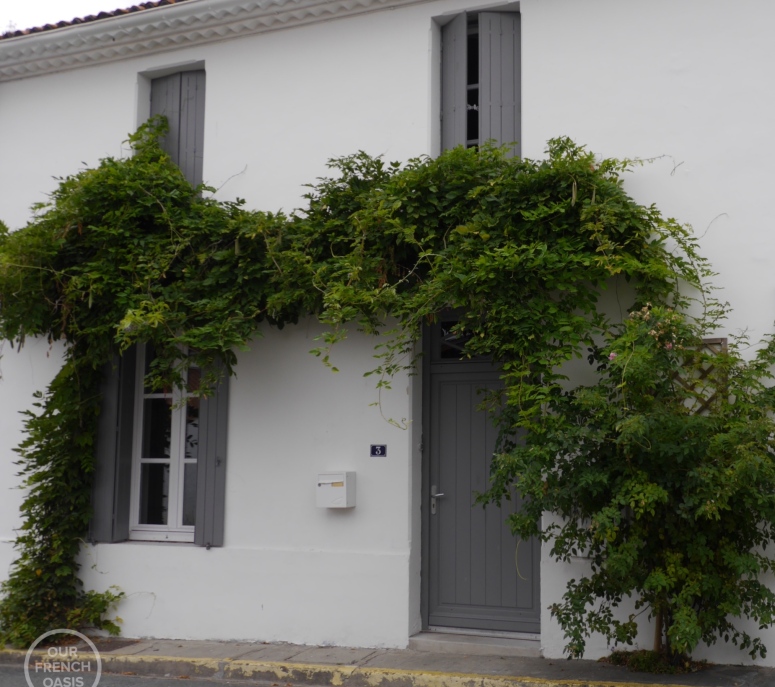 Roses are always popular as a doorway inhabitant, they frame entrances and windows beautifully and make even the tiniest path seem magical. And they are not just for private houses, shops and cafés get in on the act too. 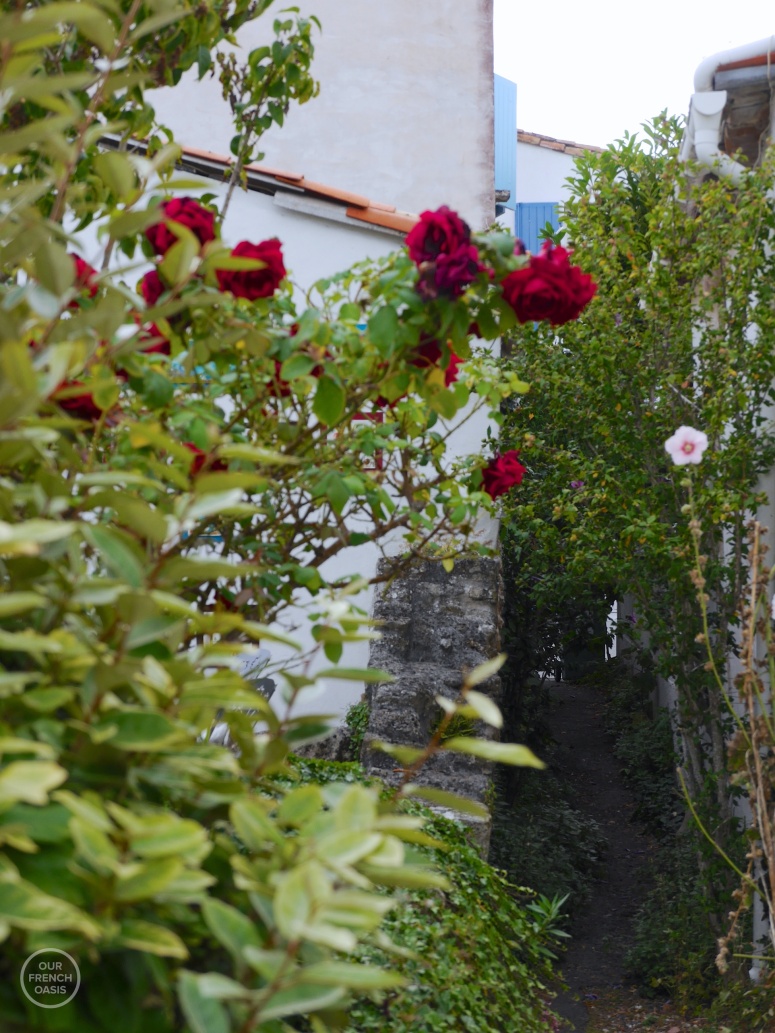 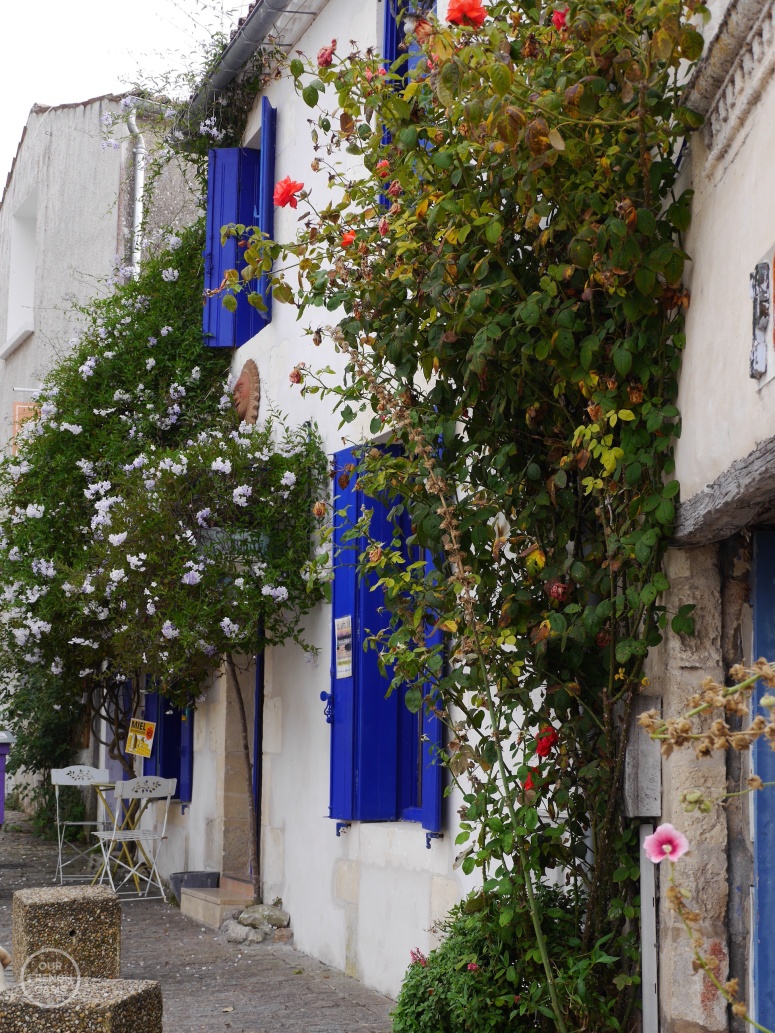 In the depths of the country, there are old barns, stables and even pig-sties that are not immune to climbing plants, whether they have self seeded and been allowed to ramble, or whether they were deliberately planted years ago –  they all add to the special charm that all old French houses seem to have in spades…. 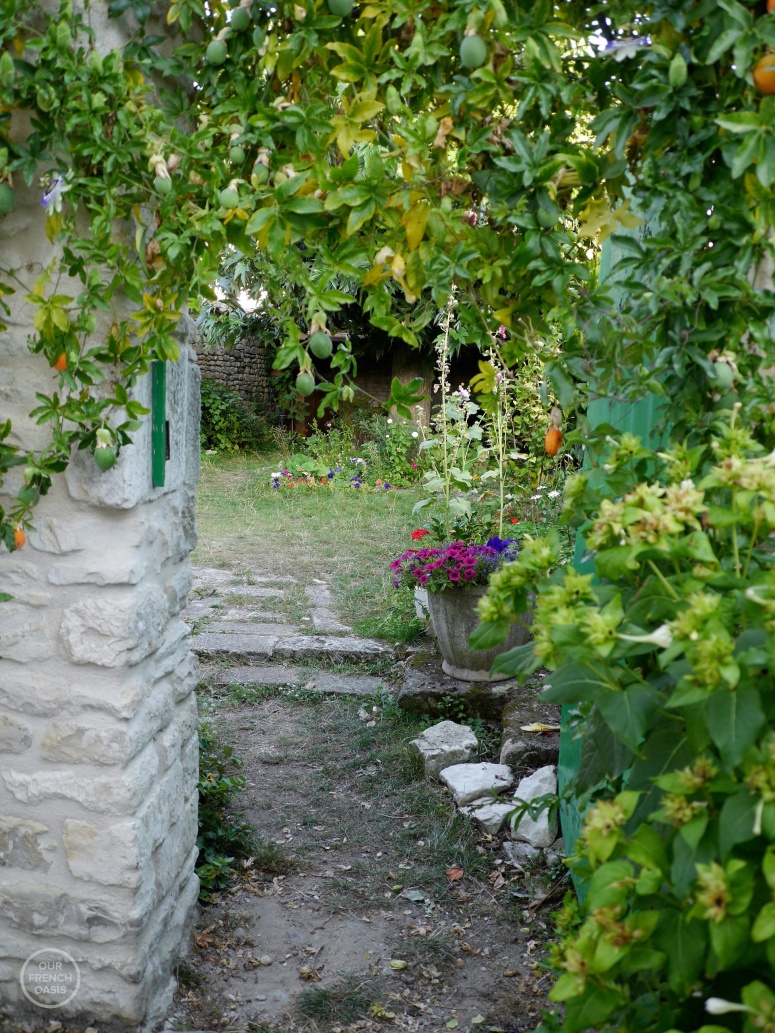 One of my recent detours led me down the narrow path below and straight to the front door of the prettiest little cottage – not in a ‘chocolate box’ way, and nor was it ostentatious enough to shout “Look at me!”; but rather it was terribly discreet, and something about the old wooden front door drew me in. For several minutes I stood there, imagining what was inside, and I fell in love with the simplicity of the front porch and its overhanging plants. How I wish it had a ‘For sale” sign attached!  But then again, perhaps it was better it didn’t have one….. 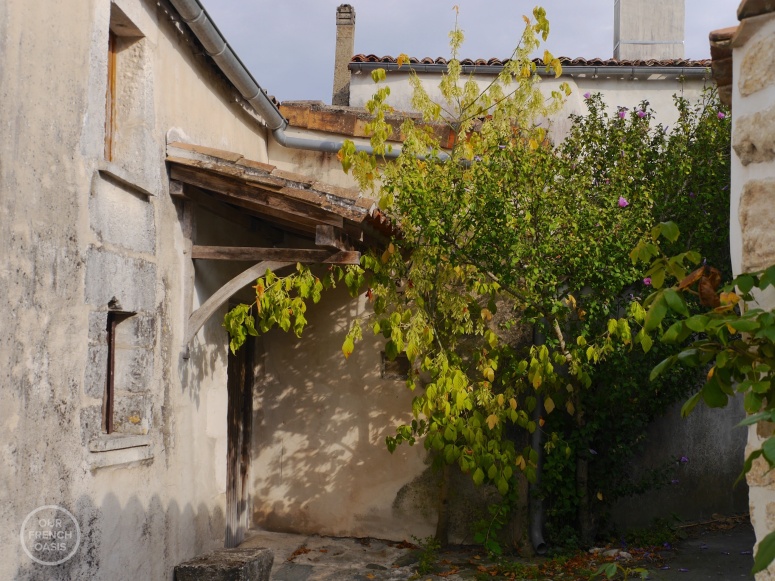 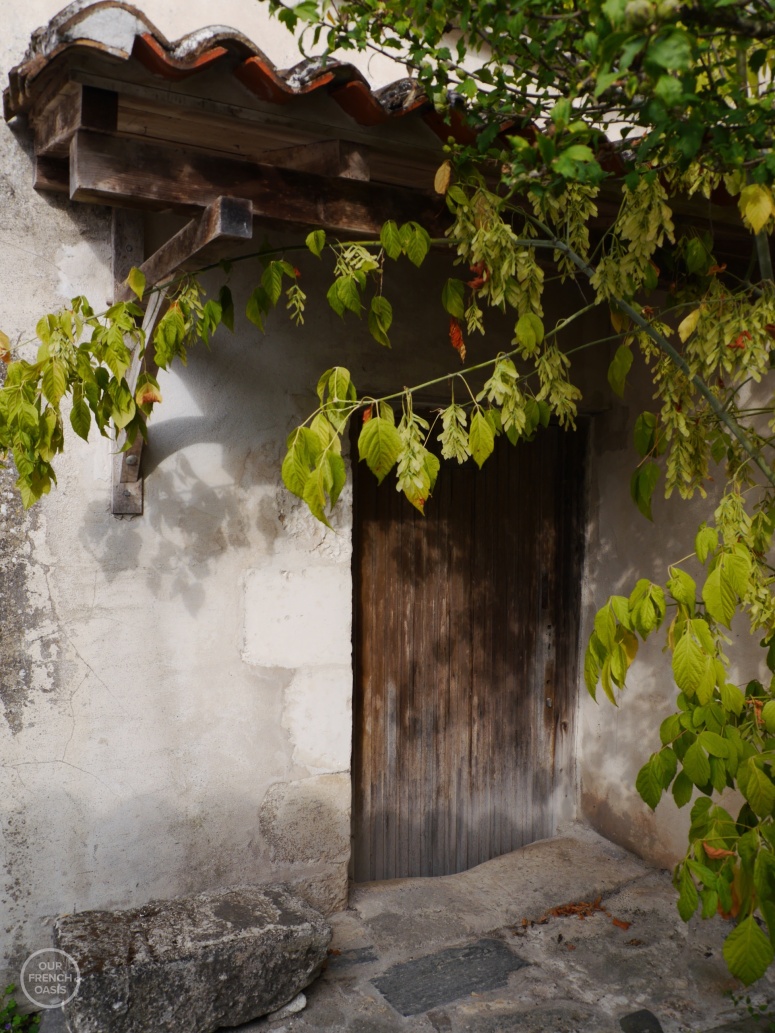 No alley in any of our local villages is scary or poses a threat that might be often associated with dark areas in public places; instead, all of them just ooze tranquility, and even those that are not immediately pretty or breathtaking still have a special attractiveness, and they echo with whispers and love from another time. It is hard not to sometimes imagine the sound of children’s laughter playing across the cobbles, or imagine a dog or cat, lounging in the sunshine of centuries gone by.

A fitting word to use here might be ‘twitten’ ; it’s an old Sussex word that describes exactly these small passages between houses, often so low that one has to stoop to pass through, and where in summer one can emerge on the far side with a shoulder of pollen and petals. This word often springs into my mind when I wander old villages in France, and yet rarely does anyone know what I am talking about – it’s a memory of where my family come from,  and a word I learnt at an early age. As I wander these places in my adopted land, it’s a crutch to lean on sometimes, to make me smile.

Of course, it is no secret that plants can turn an ordinary every day gate into something a little bit special…. it’s a habit that humans have been practising for many centuries, across a slew of bygone civilisations.

With their bloom and blossom plants can of course also bring life to a dull facade of any house…. 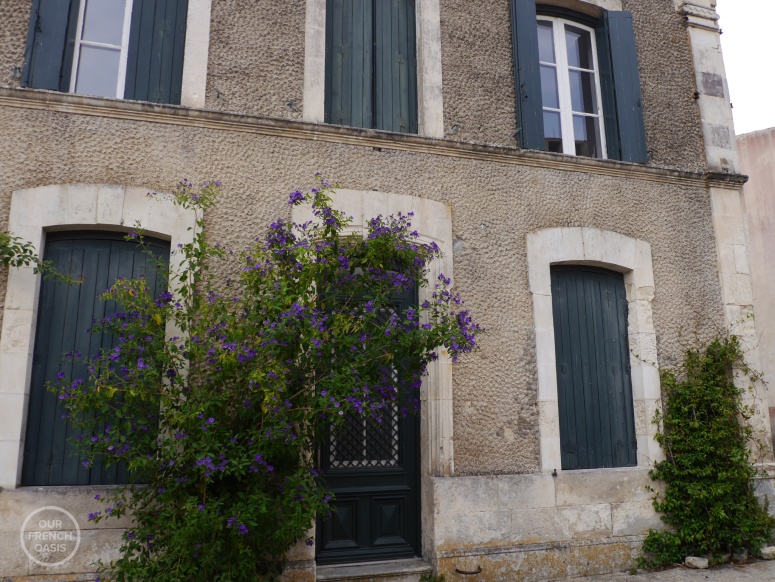 There is little to better a traditional mix of old stone and white…..

other than a tiny splash of colour, perhaps…. 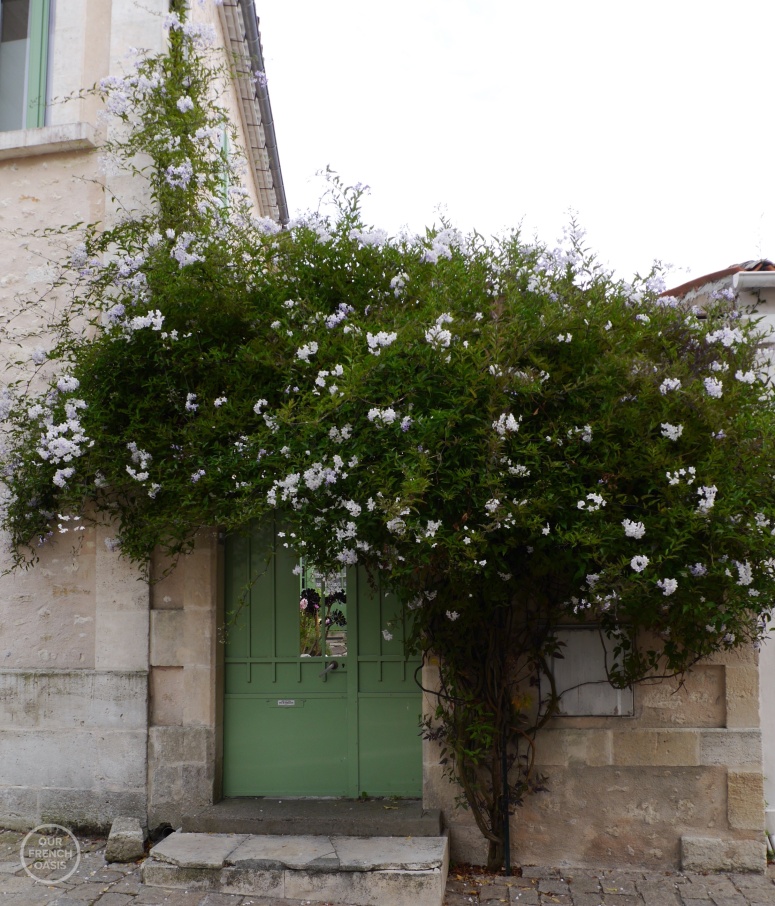 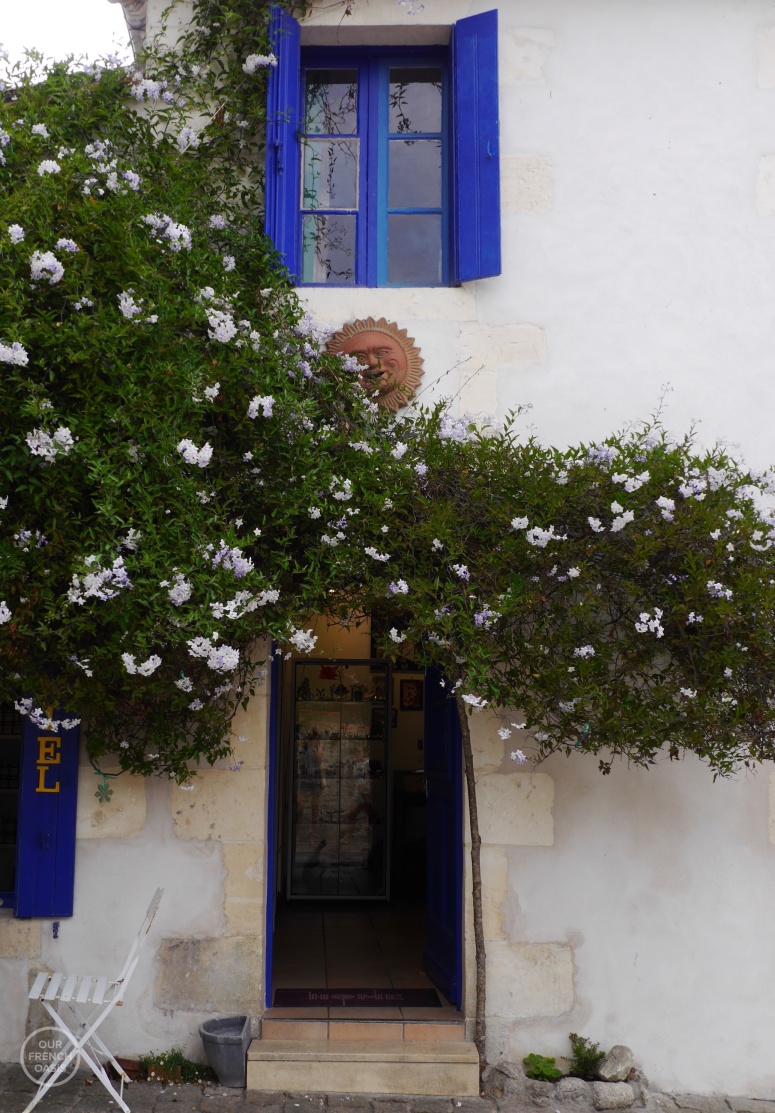 Even the plainest of doors are not immune to the charms of greenery, although I must admit I do think these are the perfect blue, that colour that can only be achieved with age and sun and time….

As I already mentioned, there are cobbles everywhere down these “twittens”……along with a mix of flagstones, both whole and broken, and some paths are a simple tread of re-used building stones and bricks….the French are a very thrifty race; they have learnt over the many centuries of invasion and hardship that they have suffered that it is best to ‘make do’, a simple philosophy that makes a race endure…. and makes old traditions hard to kill off. 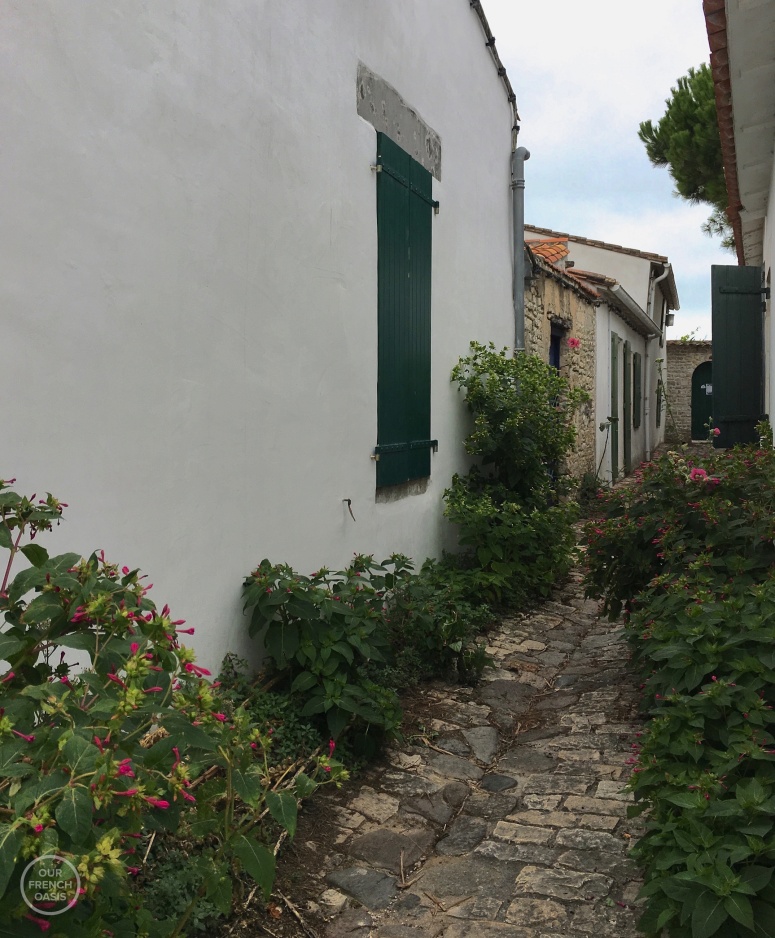 Blue and green shutters are definitely the dominant colours … 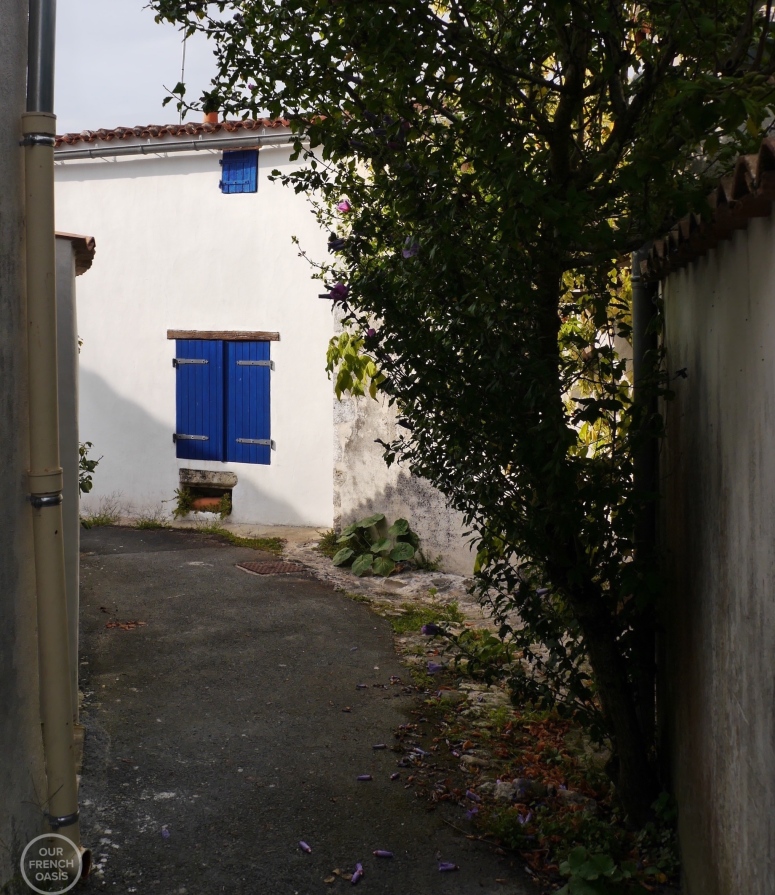 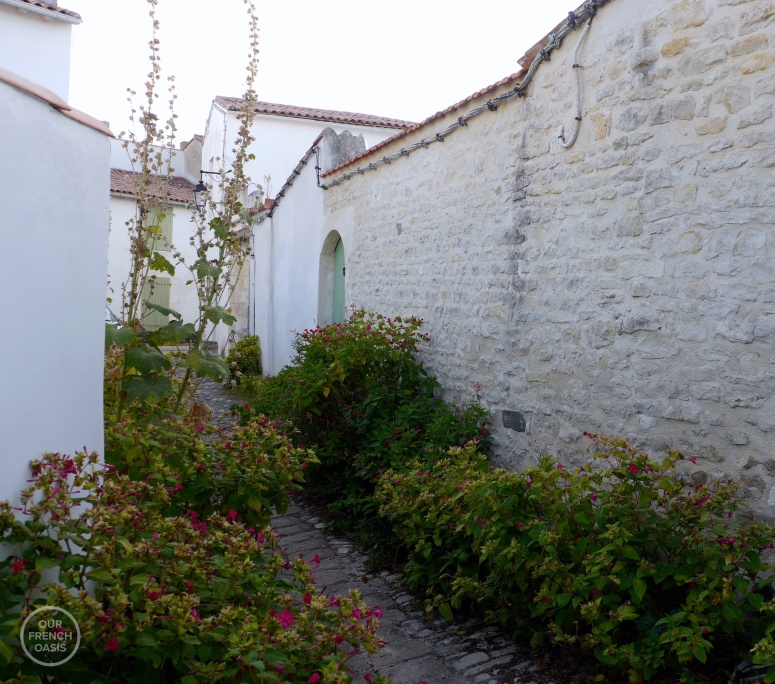 This small ‘folly’ of a spire intrigued me greatly, standing quite new behind an ancient wall — beyond I could see small stunted apple trees, perhaps as old as the wall itself. Where else can you find as many rare and forgotten varieties of apple and pear as you can in France? Some strains may be confined to a single orchard, for example, unknown and unpublicised ….. it made me think….

I hope my brief look at some of my favourite “twitters” has transported you for a few minutes to the Charente Maritime in France and I insist on an exchange of local words – tell me what you might use that might be gobble-de-gook to others!