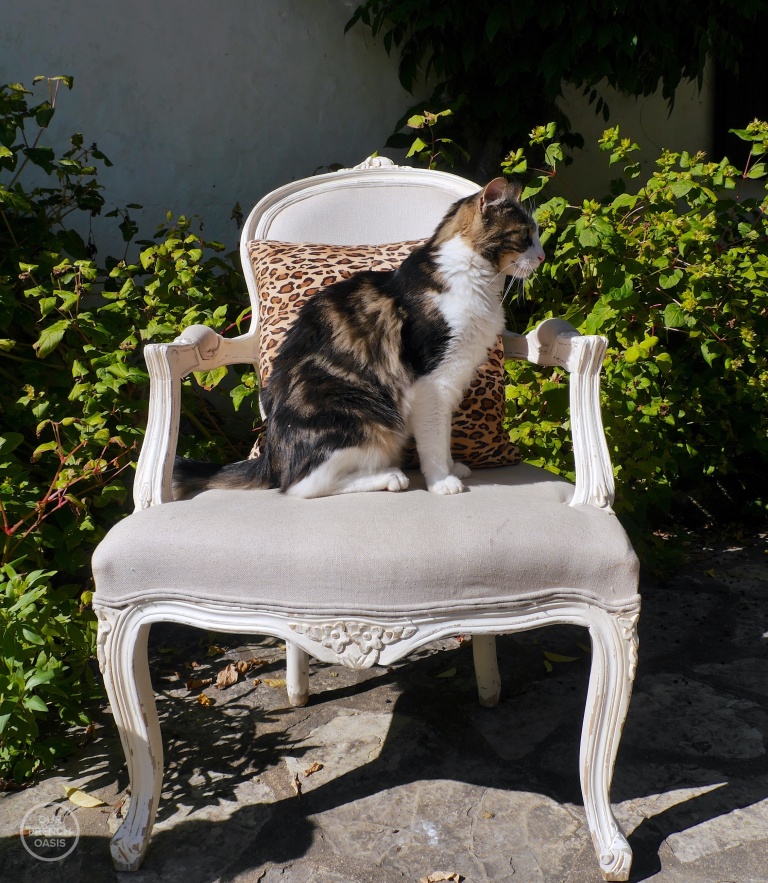 I was born under the hood of a rusty broken Citroën 2CV in a thunderstorm one miserable afternoon, three years ago. My mother was Estelle, the darling of the farm, and my father was the thug from the bakery behind the church, or so I was told. Sixteen of us called the Citroën in the hedge ‘home’ that autumn, until during a rainstorm in November one day a car drew up, containing the humans I live with now. I left home without a suitcase 20 minutes later, bearing nothing more than a handful of fleas and the name I had been born with, Phillipe de Courtois Barthélemy d’Aquitaine. My proper life had begun.

Things changed momentarily for the worse two days later, when the humans from the car renamed me ‘Amy’. Huh, stupid English peoples. What sort of a name is that?

When they took me away, they also took Clara, my sleek petite sister, and together we have been here now in the big white house for 36 months, a length of time equivalent to 28 human years. Let me tell you a little about my life.

It’s been easy living for me here, apart from the odd drama such as when they suddenly changed my name from Amy to Rory, I wasn’t too displeased, anything was better than Amy, it quite ruined my macho ego and besides, how did they not notice I was a male cat?? Or one early visit to a funny smelling table when I was young. I remember nothing after counting to ten when a woman in a green coat told me to and then I fell asleep; and when I awoke I felt empty and hollow, and no longer had the urge to rip curtains to shreds or lift my tail against every chairleg in the house. It was quite bizarre. Clara, who had begun to look so attractive to me, lost all of her charm and allure as well, but thankfully, I discovered lizards soon after, and life changed again.

I rise at dawn. I’m not a hunter like Clara, and I am above disputing territories with banshee-wailing tomcats at all hours of the night. Why do all that when you get fed regularly, anyway? It’s cold and wet out there half the time, for goodness sakes. And there are all those strange noises, snails, those dreadful black and yellow lizards that make my tongue froth, and strangers of all sorts in the garden, including those prickly things that curl up into a ball, I learnt my lesson with them the first time, thank you. 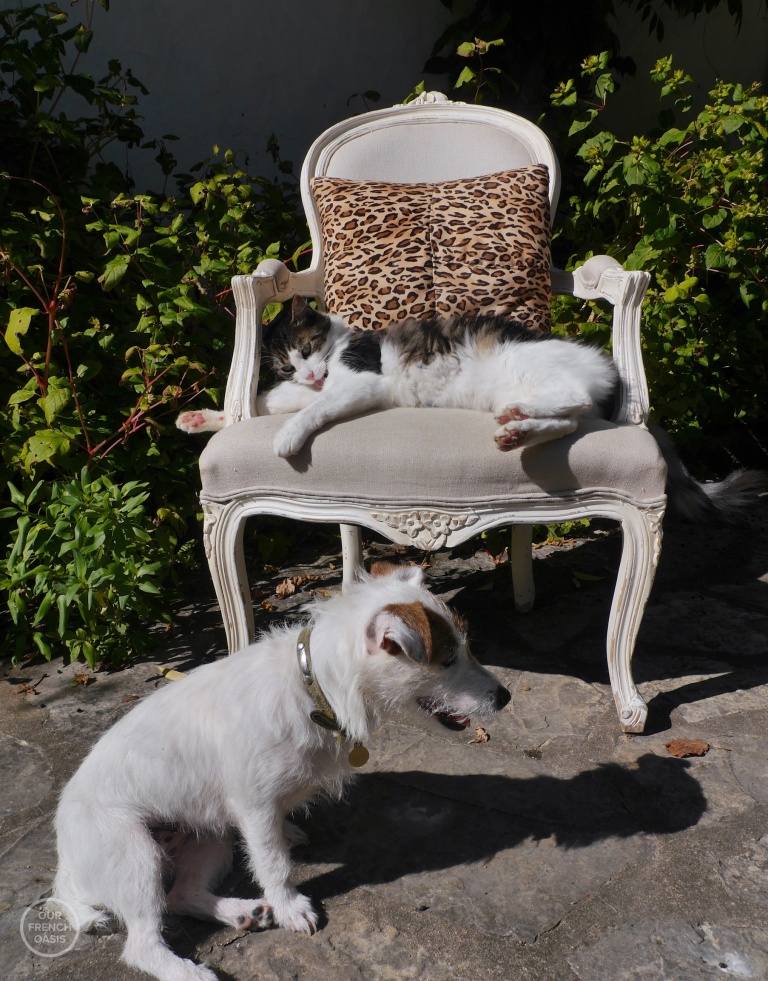 Oh no, if I am to hunt, there is only one thing worth hunting in the garden, and that is the dog. Did I tell you about the dog? It’s a little female white and brown patched thing, called Evie – if my ears hear correctly. And since the day she came here, she has been my best friend, through thick and thin. We play-fight together, anytime and anywhere, and and it’s fun to pretend she is winning; just at the right moment I’ll just poke her with a claw in the eye so she yelps and runs around in circles scratching her face.  Evie will do anything to play with me, except climb trees (I have no idea why she cannot do that) or follow me up to the summer-kitchen roof (and I have no idea why she can’t do that either). She seems to have no spring in her legs and can only jump high enough to get a human’s attention. Perhaps she needs to visit the funny table and be fixed. The old fat dog needs some work for sure. A visit to a health spa for a month might do the trick. Bentley is his name; boy, does he need some gas in his tank….he is sooooo slowwwww. 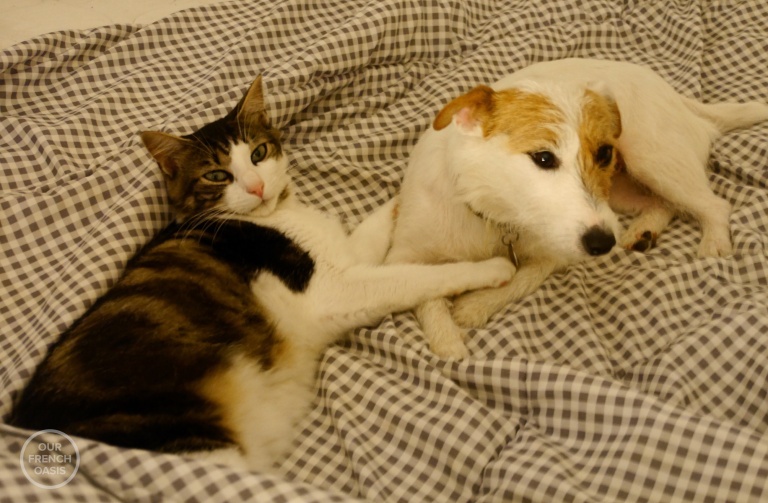 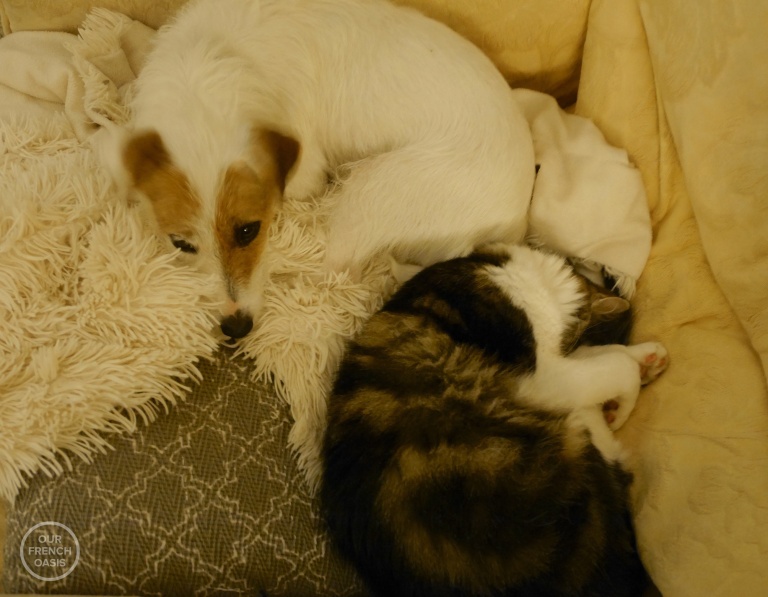 Talking of Evie, it’s strange that she and Clara do not work as a relationship, not from the very moment they met. Instead, Clara spends her life watching her own shadow in fright, waiting for Evie to come bounding out of the bushes and roll her off down the lawn. In fact, for much of the time, Clara lives at the far end of the chicken garden, safe in the knowledge that she is out of Evie’s reach there. This makes Clara’s journey back to the house each day for breakfast a fraught passage of time, for Evie is often on the prowl, helping the man human feed the chickens. And although Clara is quick, Evie is quick too, for a dog. There have been some very narrow squeaks on the race to the safety of the cat-flap, I can tell you. I must add that although for some reason Evie also cannot go through the cat-clap, the fat dog CAN, quite happily! I suspect that might be only because he will go anywhere, anyhow, if there is the slightest chance of a morsel of food. The poor tubby is always on a diet but only seems to go up, not down, in size.

The best part about living here though, are the humans. Well, not the humans themselves, but the warm house they have. With terribly comfortable cushions, lovely sofas, two bowls of dog food, a huge water bowl, and an upstairs full of soft, down-filled cushions and piles of bedding and duvets to burrow into, one long day just passes dreamily into another. It’s fantastic; well, up until the point when the man human picks me up and takes me downstairs and puts me out the door. I try hard to hold on, but this causes noise which scares me and the subsequent evacuation is not always to my liking. I have landed headfirst in the plants once too often. But those pillows….mmmm. It’s all worthwhile, especially when you have been playing in the garden and have muddy feet. I’ve found the noise is even louder then! 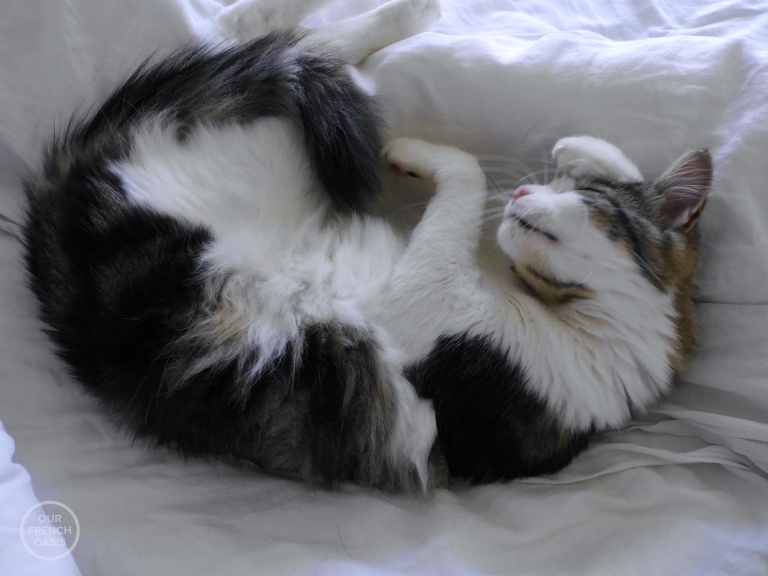 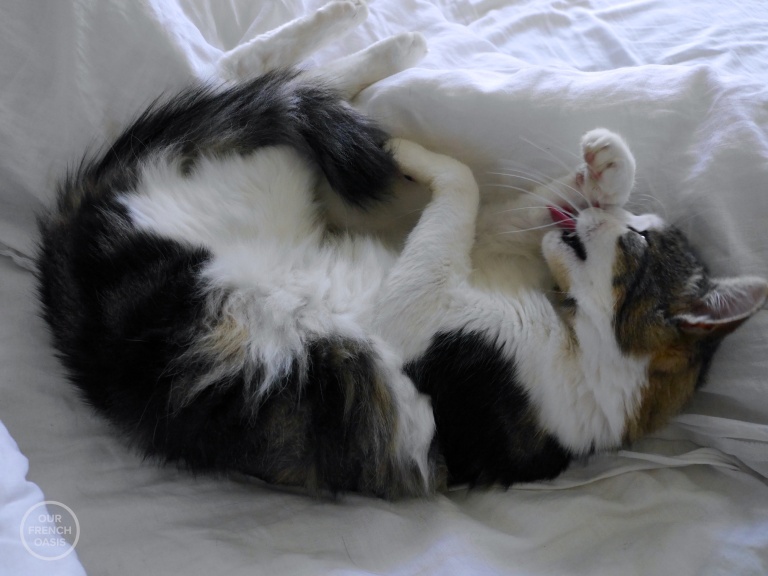 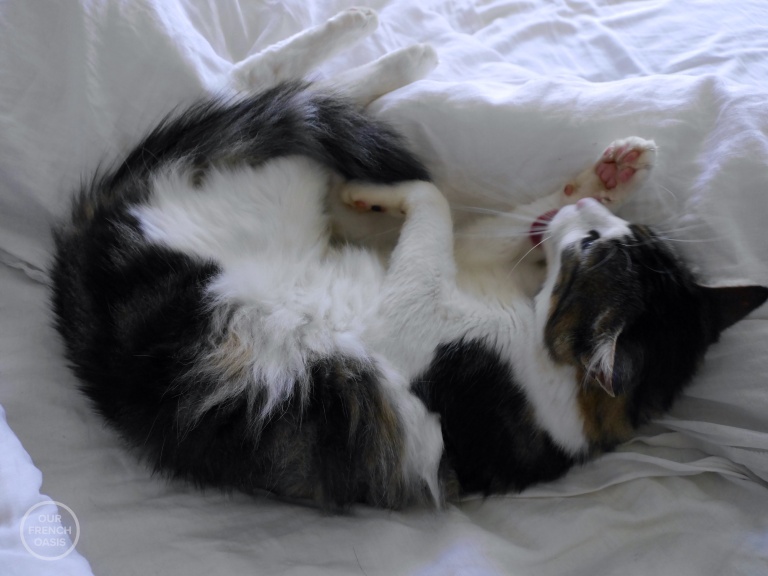 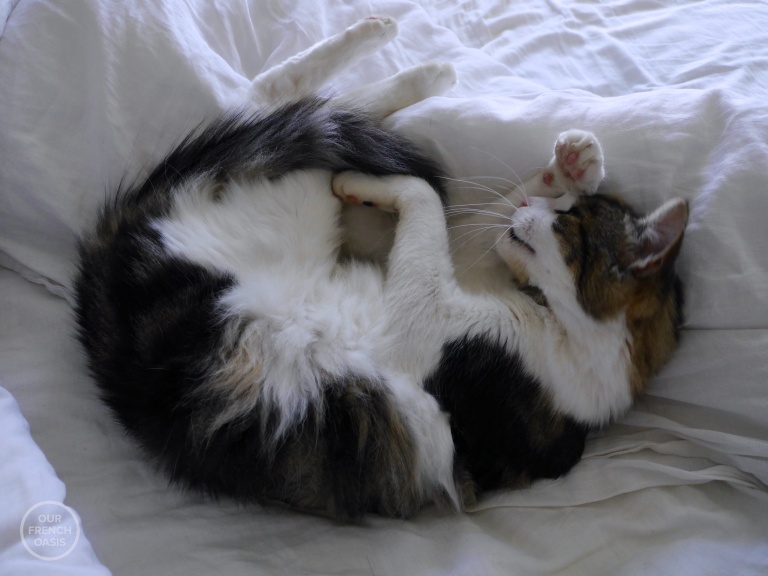 I like to think I have the humans well trained by now, though. My favourite example of this is when the man misses me at bedtime, when it is late and dark, and he passes me by as I lie hidden on a small person’s bed (they’re the best to sleep with, no funny perfumey smells and they love having me there). I don’t mind at all. I sleep quite happily till about 4.00am in the morning when it’s time for a pee. I’ll pad into the big humans’ bedroom and jump up on the man’s side of the bed, screech ‘meaowwww’  loudly in his ear, and then I’ll stand back and watch in amusement as he jumps bewildered out of bed. It always works. Then I get taken downstairs, carried no less (does he think my legs don’t work all of a sudden?), and even though he has no pyjamas on, I still try to hang on as long as I can before the door is opened and I get put outside. Sometimes I leap off him with all my claws extended for a good grip, because in the silence of the night the noise he makes is such fun… let’s just say I now know a lot of English swear words! 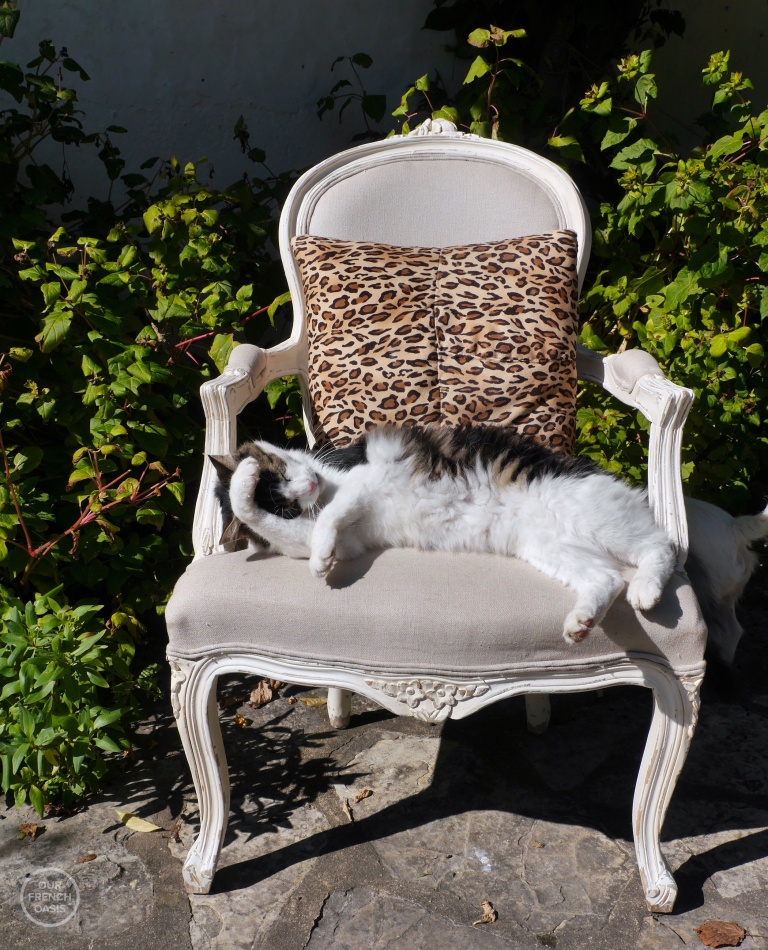