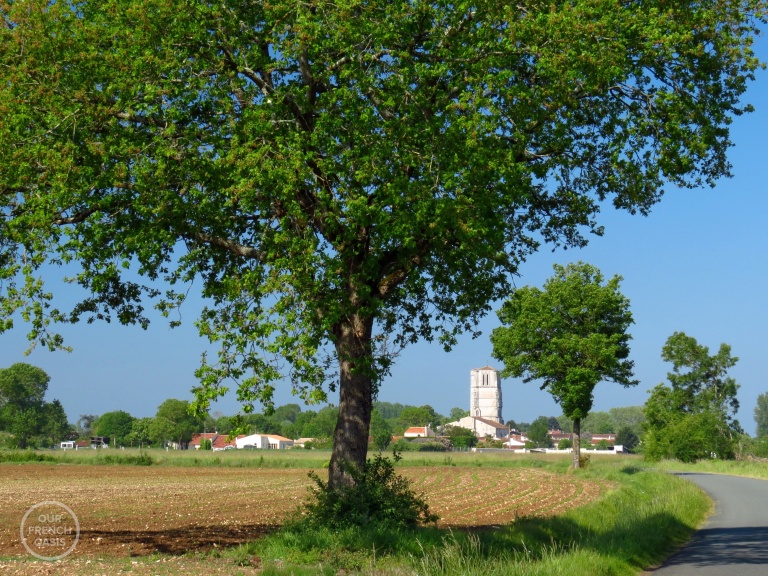 This blog is becoming quite a prominent feature in my daily routine, whether I’m driving, or in the garden, or out walking; it seems very often I am thinking, “I must take a photo and chat about this or that in a post”. And so I often find myself pulling over in the car, hopping out and taking photos – it’s just as well the roads are quiet and today I need a good distraction. 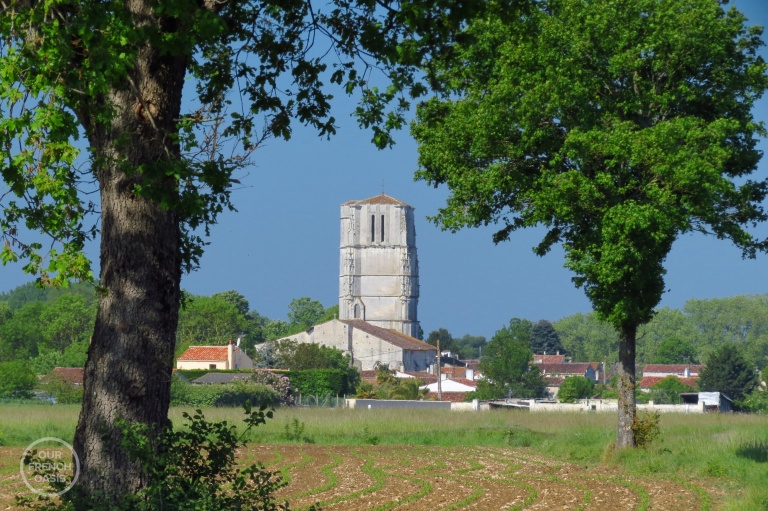 Today is election day. The future of France, and also of Europe, hangs in the balance. As foreigners we are unable to vote, so we can do nothing but wait, rather nervously, and see what happens. There is no point in worrying all day today, this is what I keep telling myself, because when I think about it I start to panic. By tomorrow our whole life here could be turned upside down and in jeopardy. But for today I am going to enjoy everything I love about France.

One lady who is totally unfazed by the election is Katya, our Pekin Bantam hen. She is a new, first-time mother, since last night, when she hatched four little chicks and I can tell you she is as proud as punch, and so are we. I know we’ve had chicks for the past two years, every spring, but these are the first ones ever to come from our eggs, laid by our own hens and fertilised by our own rooster. A complete cycle. 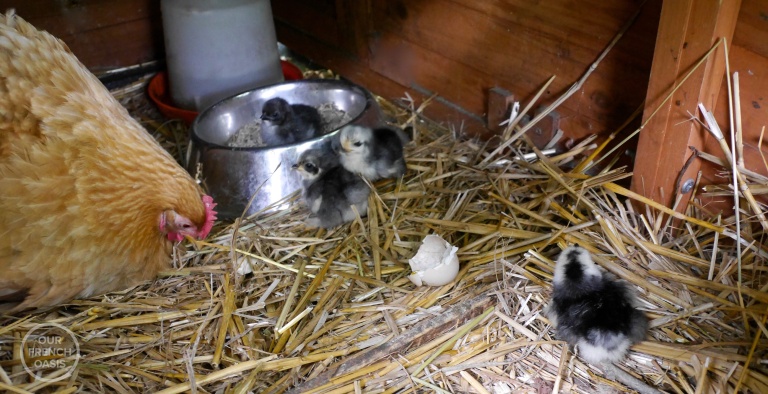 Fritz, our first rooster, who we bought from a supposedly very good breeder about an hour and a half away, appeared to do the business, frequently! But after several failed attempts with eggs and broody hens it became apparent that something was amiss and a chance conversation with an amateur chicken breeder in our neighbouring village, confirmed our worst suspicions; he’d probably been sterilised and would never father any chicks. Apparently there are breeders who don’t want their roosters’ lineage continued and do this far too often, and – as in our case – they don’t mention it, and I assume they hope they will never be found out.

Anyway, last year we bought some fertilised bantam eggs and when one of the pair hatched and one was a male we were delighted. Now it’s a year later and we have three broody hens. As Katya was the first to decide it was time to think about motherhood we installed her in the nursery coop and she became the lucky recipient of some eggs. We moved her from her chosen nest in the main coop at night, when she was sleepy and quiet, and slipping her into the small coop we let her sort the eggs out herself. Like a seasoned veteran she pushed them around, rolled them underneath her and made herself supremely comfortable. Yesterday was day 21 and we heard a familiar cheeping sound when we opened the hatch to check on her; sure enough a tiny little chick emerged from under her right wing. We left her in peace for the rest of the evening and today we took a longer look! 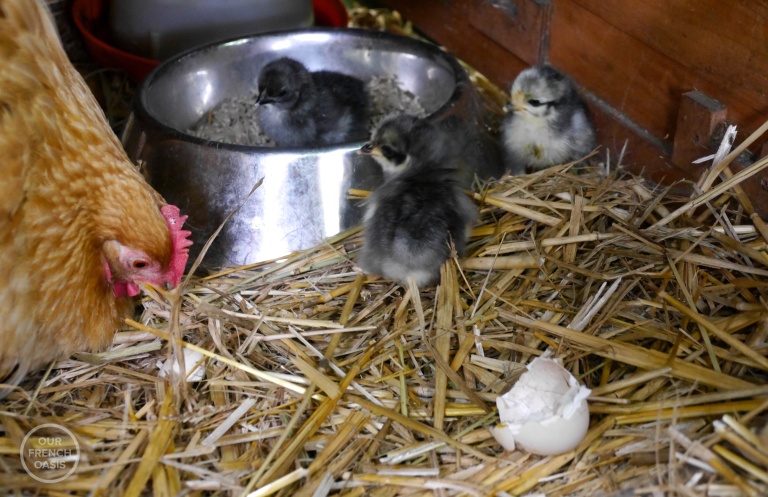 It’s been quite an extraordinary few days in the garden. We have always had hedgehogs and every now and then we are lucky enough to see one. 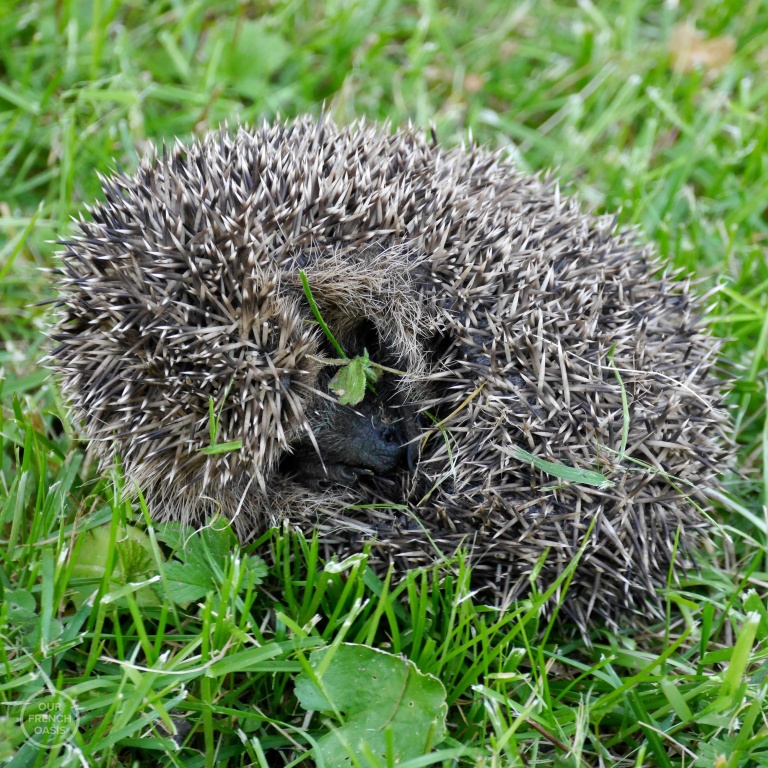 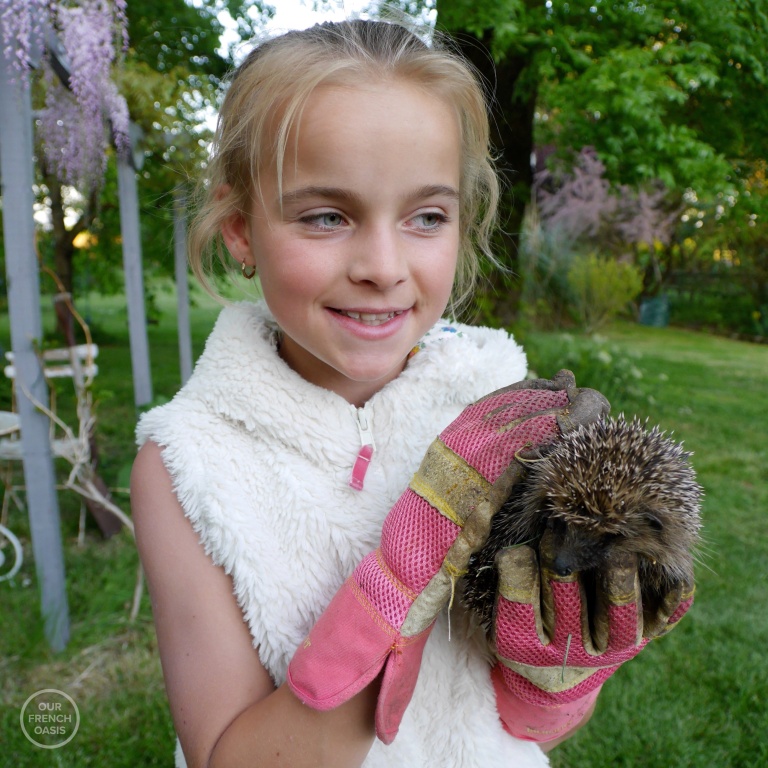 We’ve also found we have a pair of hoopoes nesting in the ancient trunk of the ash tree. I had never even heard one until we came to live here, but now every spring their call is becoming a very familiar sound. I never imagined we would have a pair in the garden though. They don’t seem particularly bothered by us, in fact I can get within a few metres, but they are never close enough together for me to get them both in one shot! Unlike so many birds, the male and the female have very few differences. 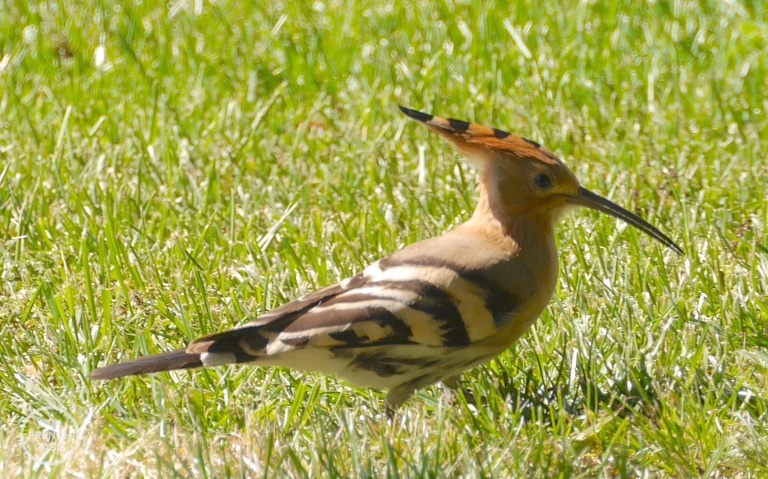 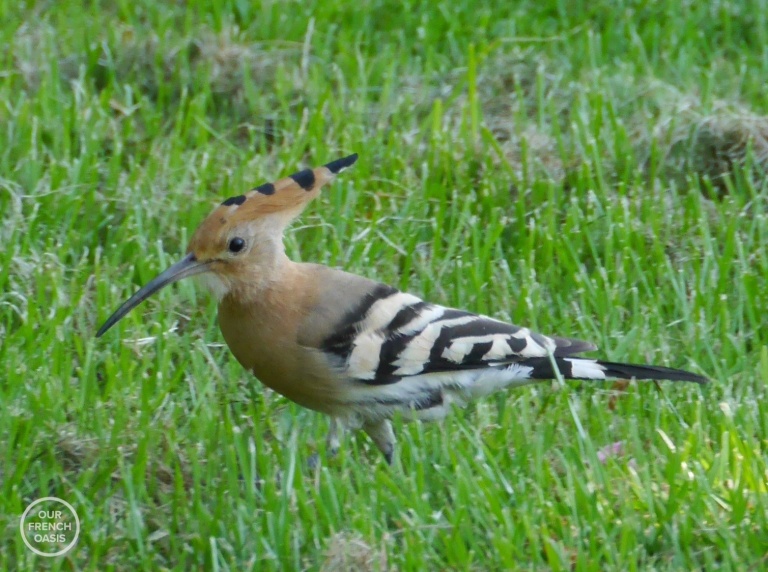 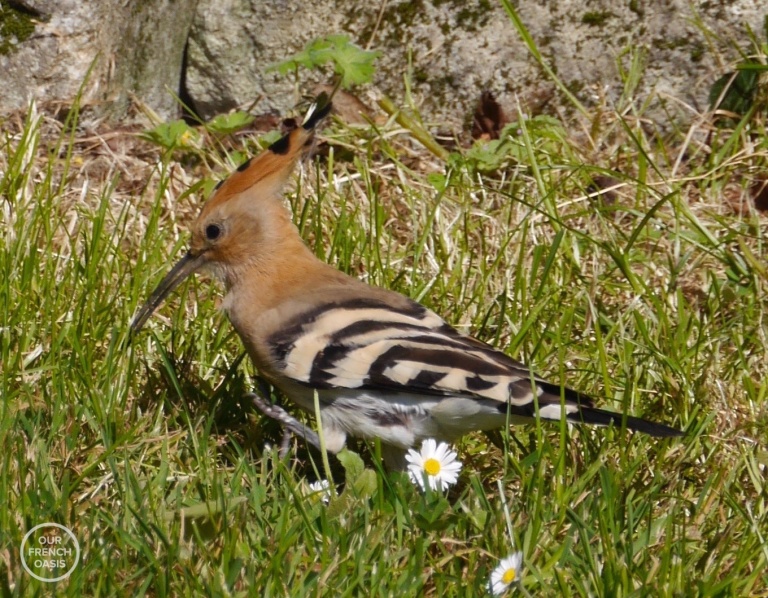 We have copious numbers of butterflies and I’ve eaten my first two cherries off our tree,  and it looks like being a bumper season; okay, so they weren’t completely ripe, but I was impatient to try just one. Of course one is never enough and so a second found it’s way into my mouth without me even thinking about it! We need to get some anti-bird devices in place. Roddy’s project for this involves drilling holes in the top of some old blank CD’s which we will then hang with a piece of string from various branches. They should act as  a series of flashing mirrors and according to a friend, is a great deterrent for birds. We have our fingers crossed it will work!

I like to think our abundant wildlife in the garden is due to the fact that we don’t use pesticides. 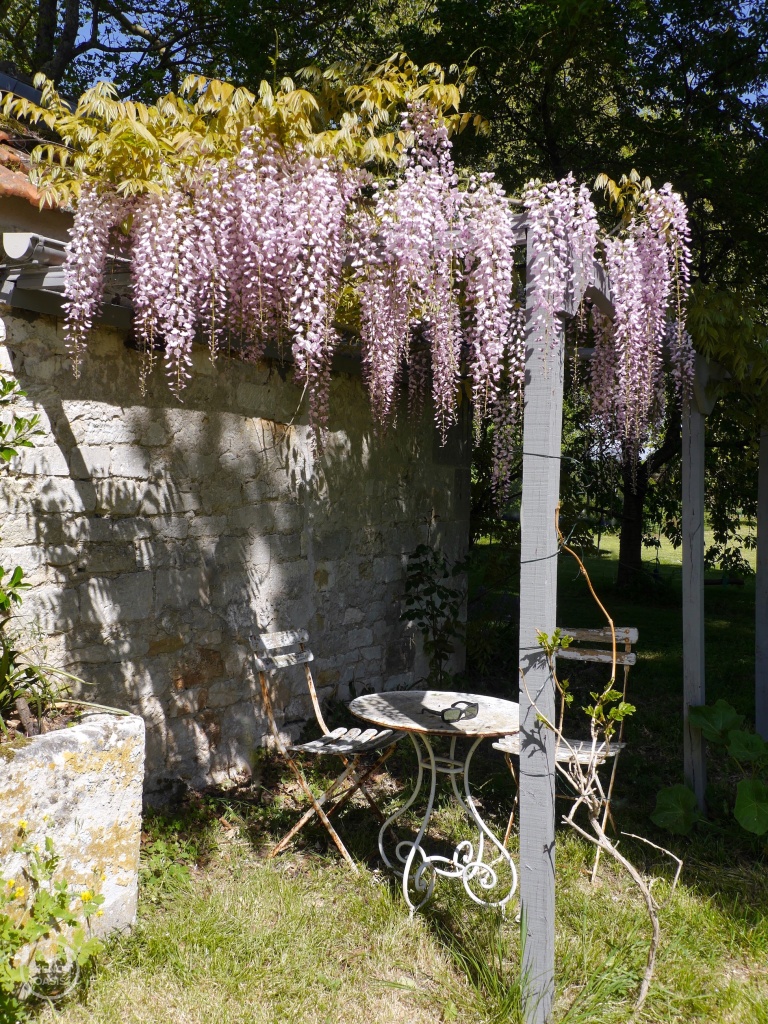 Some places we leave totally natural, a haven for insects and bees and in other areas we work hard to keep the weeds in check. We’re not the only ones to believe in a more natural organic style of gardening as it appears that much of the area has the same idea. I’ve passed the sign below in several nearby villages now, and then – only yesterday – I saw the exact same one on my way into Rochefort (a good-sized town with a population in excess of 25,000). I was really thrilled to think that even the larger more urban areas are adopting this pesticide-free approach. 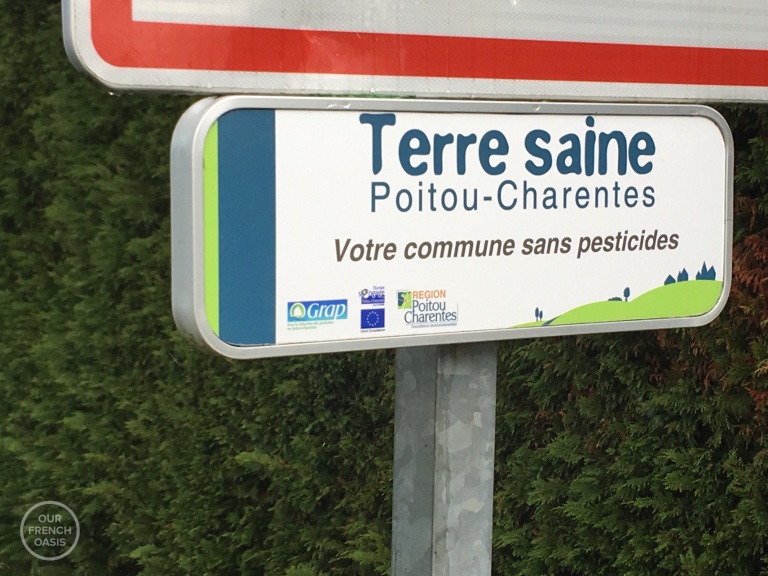 Meadows full of spring colour have caught my attention whilst walking the dogs this week and I’ve stopped and just looked, snapping away with my phone because I didn’t have a camera, but also not wanting to miss the opportunity. 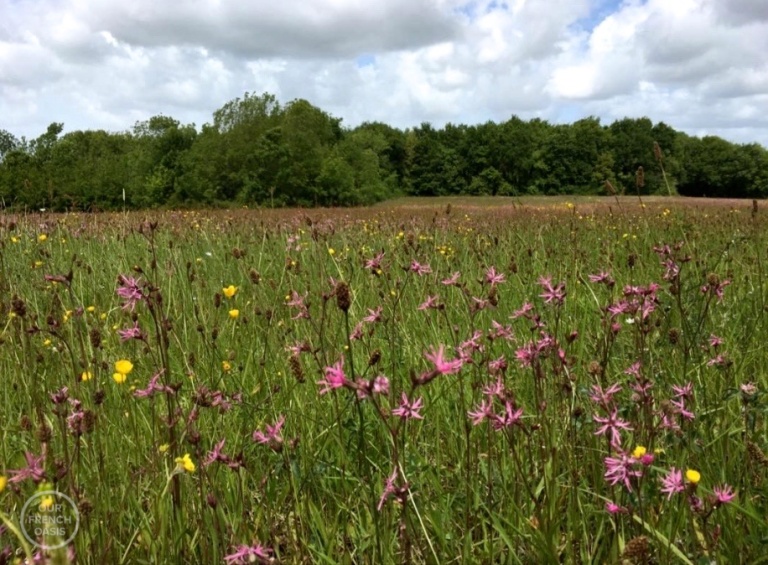 Occasionally I’ll pick wild flowers to pop in a vase on the kitchen table, but only when there is a plentiful supply for self-seeding. I always cut and make sure to leave the roots intact, as well. 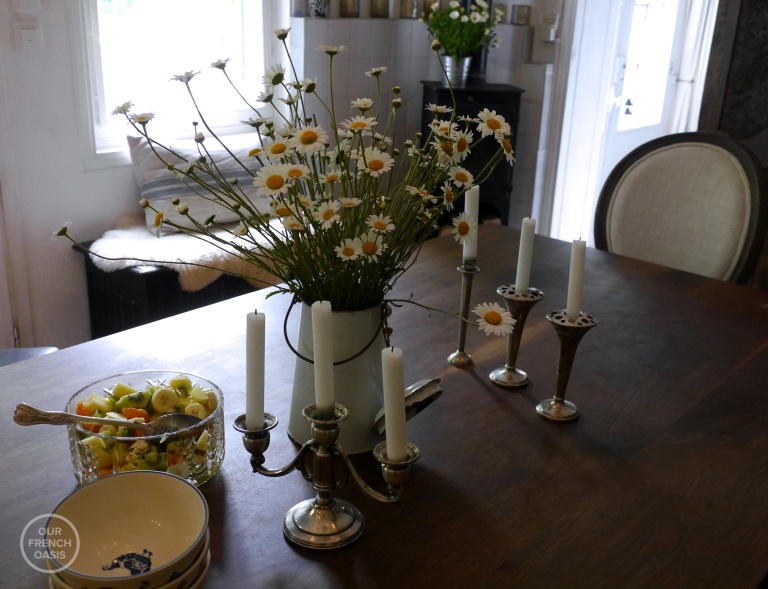 Of course there’s some scenery it’s impossible to pass by, and I’ve stopped a few more times and just taken random photos, because there is beauty in an old shutter 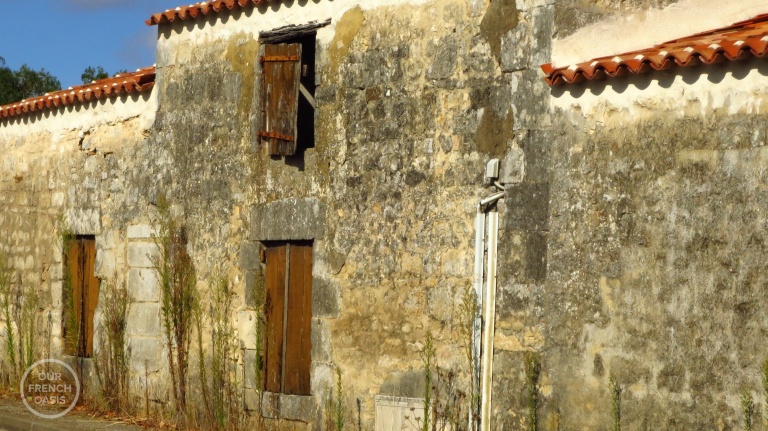 and an open door always peaks my interest. More than anything I’d like to have gone inside the entranceway below; I could see absolutely no more than the picture shows, if only I could have just pushed the door a little further open and poked my head around, but no, I couldn’t, I wouldn’t and I didn’t, so we’re just going to have to imagine what it is like and dream a little too! 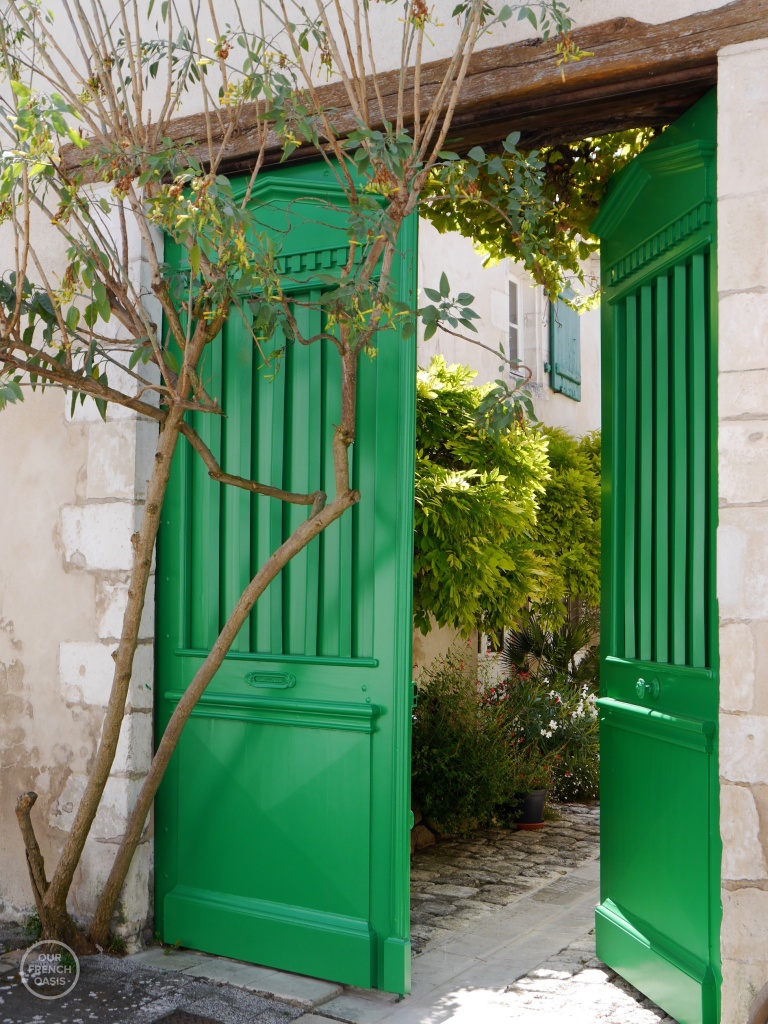 It’s been a complete mixed bag weather-wise. For the most part it’s been sunny but OH, the wind! “le vent” seems to have been the first word uttered in many recent conversation, because it has been a really cold wind, keeping temperatures well below average for May. It’s fine if one is lucky enough to find a sheltered spot and perhaps even better – like Miss Evie – if one can actually, having found the sheltered spot, have the time to sit (or in her case lie) and enjoy it! 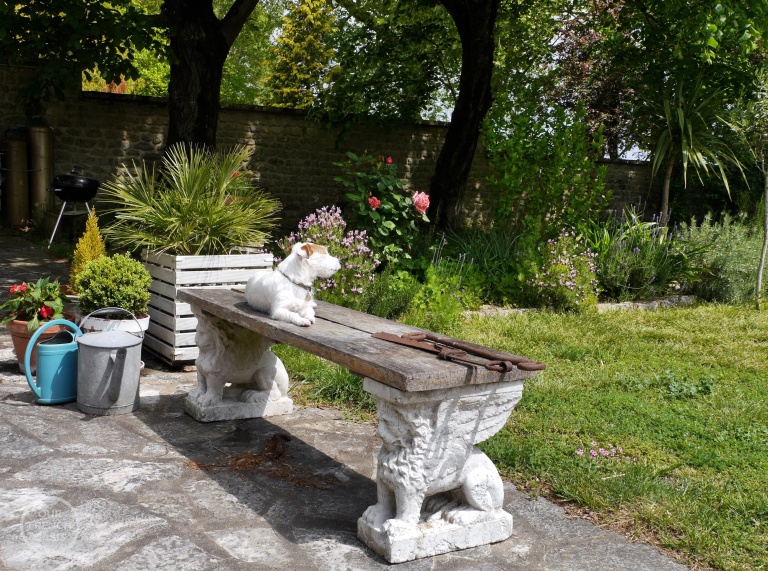 There is always something positive to be found in everything I find and although we moaned about the wind at the beach it was welcomed by the kitesurfers who were holding their annual spring competition. There were at least thirty entrants skimming across the choppy water with lightning speed. 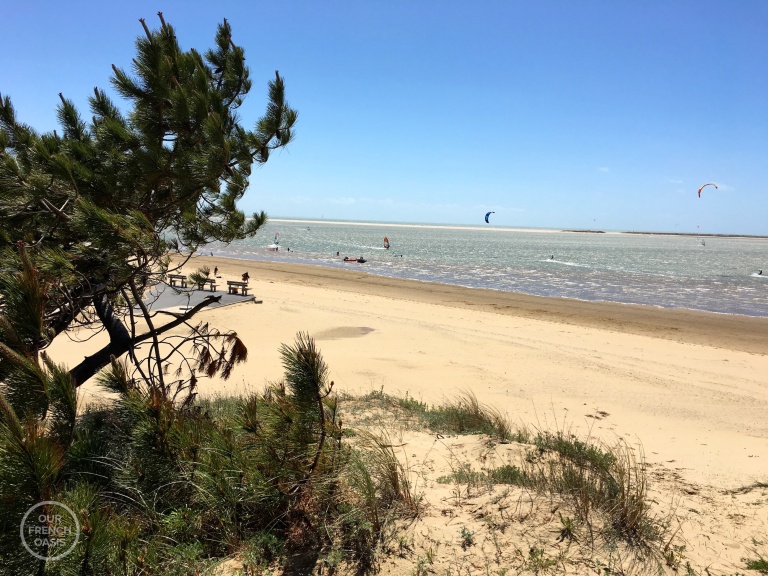 And for the first time in ages Roddy and I were lucky enough to enjoy a quick lunch at a newly-found restaurant this week, outdoors and sheltered! There were three ‘suggestions of the day’, and a further tiny menu with just a couple of additional choices. I had the omelette and it was quite delicious! I’ll leave you pondering which you would have chosen. 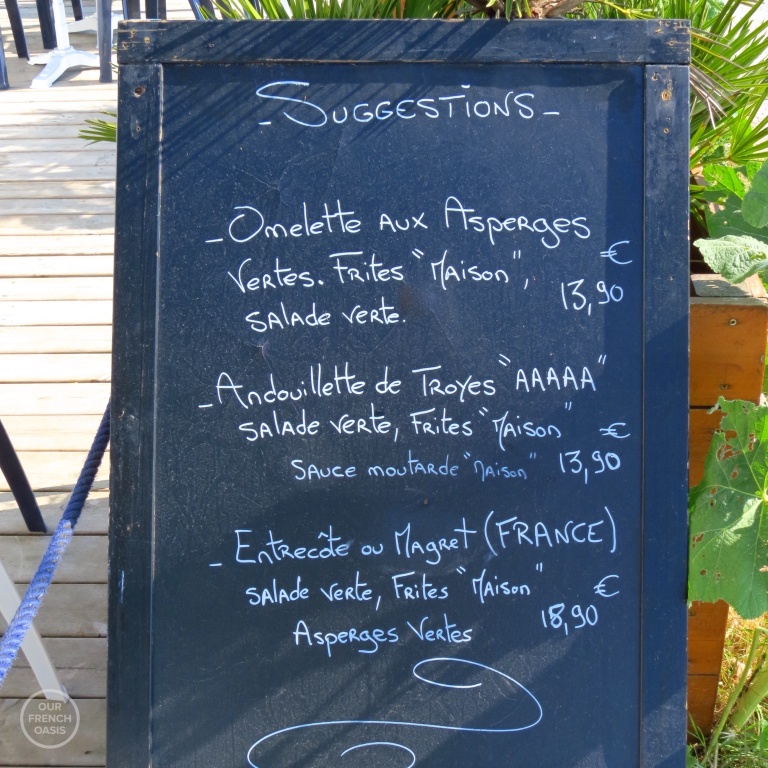 Omelette aux Asperges -The Asparagus Omelette with special home made French Fries and a Green Salad.

or Andouillette de Troyes “AAAAA” –  A specialist type of coarse grained pork sausage from Troyes, with a Green Salad and Special home made French Fries and a home-made Mustard Sauce (the five A’s stand for Association Amicale des Amateurs d’Andouillette Authentique (AAAAA) ‘The Friendly Club of Lovers of Authentic Andouillette.” This club was formed by several food writers in 1970 and it gives certificates to producers of high-quality andouillettes)

or Entrecôte ou Magret – Entrecôte steak or Duck (both from France), a Green Salad, special home made French Fries and Asparagus.

As a postscript, Roddy insists I warn you about the Andouillette – it is not a traditional sausage but one made from the colon and other associated parts of pig bowel. For many people this is enough to put them off, but there is also the small matter of what it smells like too. Unwary eaters have been known to liken the smell to an unwashed sewer, so beware! It is however, very French! There is much to find out about it on the internet, most of it amusing!

151 thoughts on “Weekend Ramblings from a French Village!”