Today I am doing something totally new and it’s taken me completely out of my comfort zone! When I was first asked by Mary Ann and Cindy if I would join them and a group of other bloggers for their latest ‘Project Design: Simple Ideas to Update Your Entry’, I was not at all sure. I felt I would be joining highly esteemed blogging company and some very talented ladies with beautiful entrance halls, and I didn’t want to let the side down. To say I felt a little out of my depth would be an understatement! But there is nothing I like more than a challenge; ask me if I am up for something and it’s a bit like a red rag to a bull, of course I am up for it! Actually, I really want to thank Mary Ann of Classic Casual Home and Cindy of Rough Luxe Lifestyle for including me in this fabulous group, as our entrance hall has had a complete makeover and has never looked so good!

It was utter madness for me to take part really. I explained that I was not in any way a designer, but I nonetheless agreed, very nervously, to do it. At the very least I knew it would stir me into action to do something with the hall, the only room in our house that I really disliked, which is why I initially felt so ill at ease featuring it in any way.

I also knew we had little time to take on another project, but somehow we squeezed in some extra hours (actually scrap that, several days of hard work) and got to it! Video chats took place back and forth with Izzi, our eldest daughter, a final year design student in the UK; there was also plenty of standing and staring, holding a cup of coffee in one hand and just looking, wondering what we could do to change things around. February came and went and we still had made no decisions.

It’s a difficult room, and in some ways it is the most used spaced in the house. Not only does it see all the traffic coming and going but it is also the only access to the stairs, and it’s the area where everyone leaves their coats, shoes and their sports bags, plus tennis rackets and rucksacks –  anything that gets used every day and that needs to be readily accessible. It’s where the dogs wait for their walks and it’s where we search for gloves and hats in winter, or an umbrella, or a sun hat in the summer. It’s also part of a home with a large family –  five children, two adults and plenty of friends. So taking all of these factors into consideration, it’s not always easy to come up with a space that is both visually appealing and workable. With two people it might be easy, but with seven it’s very much harder. I don’t like to spend my entire time telling the kids to put things away, I know it doesn’t happen and so do they, and it’s all an argument that can be avoided. The answer had to be practical.

Added to the scenario are the constraints of a very old farmhouse built around 1790. No walls are straight and no corners meet at perfect right angles; no two doorways are the same height or size, and neither are any doors the same shape or design.

It’s also the first place anyone ever sees, but I wasn’t really concerned with what others think, far more important was our need to make it work, turning a place that none of us loved into a practical entrance hall. We love our home, the kitchen, every other room, but the hall was just somewhere to dump coats and bags. Hairbrushes littered the large oak sideboard as the girls rushed to get their hair done before being hurried out the door to school.

When we bought the house it looked like this 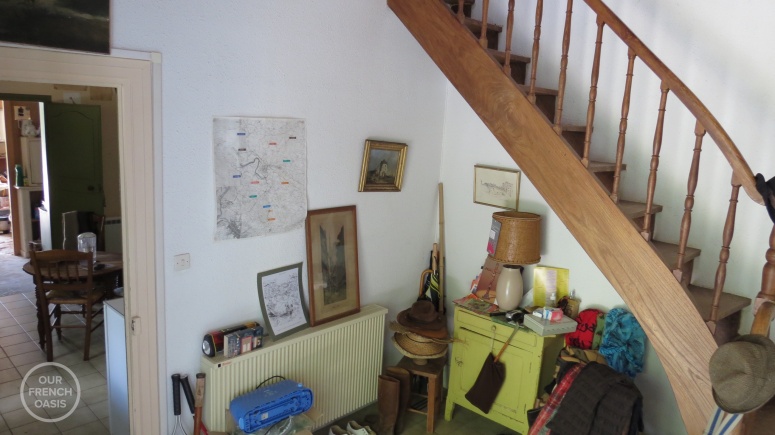 and I spent weeks painstakingly painting the wooden balustrades and sanding down the hand rails. The original staircase had been replaced in the 1930’s and I wanted to go back to an even more traditional look. The oak sideboard which we inherited with the house was moved under the stairs the day we moved in, and there it remained until a couple of weeks ago – this was almost the crux of the problem, but once I had got my head around the idea that it had to be moved everything else sort of fell into place.

So for years we had lived with the hall like this:

To transform it further was not as simple as it looks. I wanted to place the coats under the stairs, but to do that Roddy had to first fill in the backs as otherwise all the debris falls through and our coats would be permanently dirty; trust me I spent ages every day vacuuming and dusting the top of the sideboard. Slowly the hall went from the photo above (the only one I can find and one in which every ounce of clutter has been put away and the coats hidden, in reality it NEVER looked like this as my friends can confirm!) to the room below. There are still tennis rackets and shoes, coats and bags, but they no longer have to be hidden for a photo, they no longer feel in the way, this is their home. 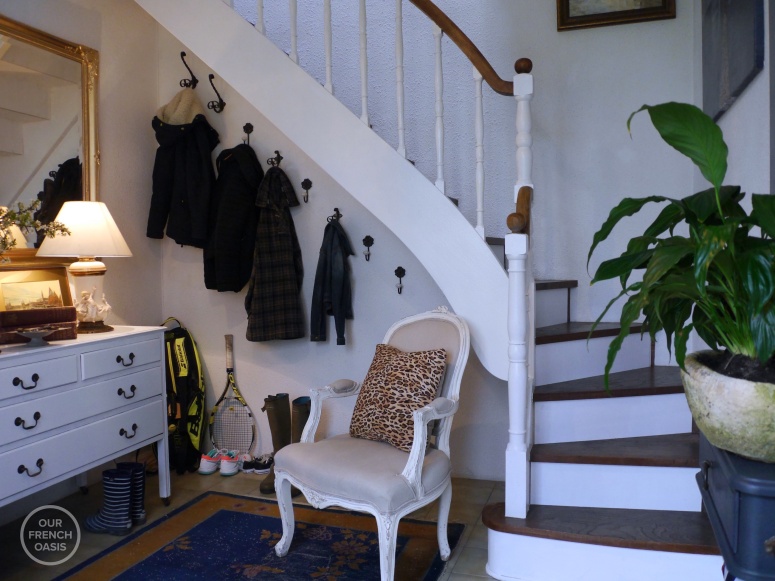 Once the stairs were done things slowly began to fall into place.

Before,the first thing you saw when you walked in the door was a mass of coats on the right which hid the stairs. Now these are gone and the wall has metamorphosed into this

We had a selection of old coat hooks that we had picked up at various brocantes over the years, I like that they don’t match, it’s part of the charm and I love the porcelain balls on the end of the trio, I wish we could find more of these. 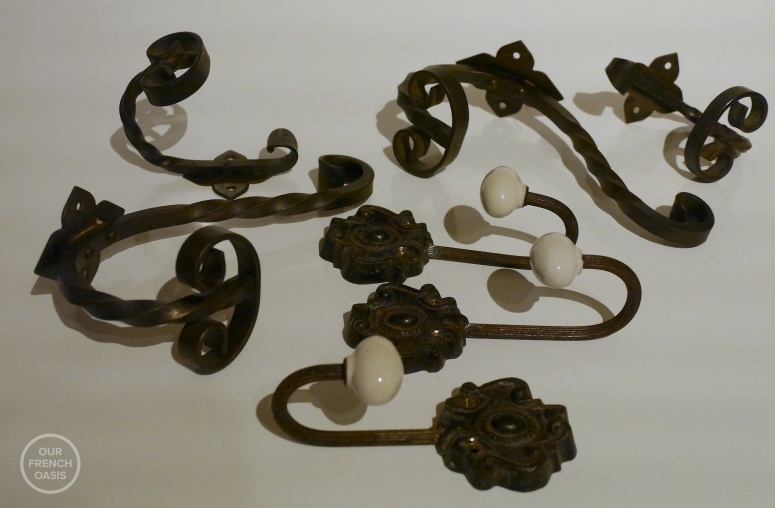 The oak sideboard went into the library/study and out came a smaller chest of drawers that needed sanding down and painting. The mirror, which I bought some twenty years ago in the UK, was a gilt affair at first and remained so for it’s first few years; since then it went through some transformations; it was first white, then two different shades of grey at varying times, but last week we decided the hallway needed a little pop of colour and so once again it went back to its golden roots.

We kept the same antique rug that we have had in our hall wherever we have lived, it’s quite threadbare in places but has more than stood the test of time since the Victorian era. I wonder if a modern day carpet would last well over 100 years!

We kept the light we have always had in the hall, an antique porcelain oil lamp which was converted to electric many years ago, and also one of my favourite little paintings which my grandfather picked up in Italy when he was a soldier passing through there during WWI. He had it wrapped up and sent back to my grandmother, at the time his fiancée. 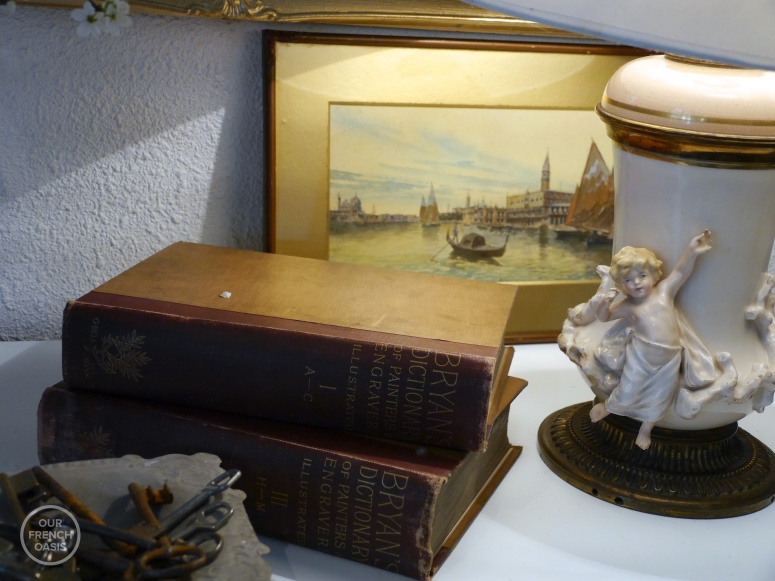 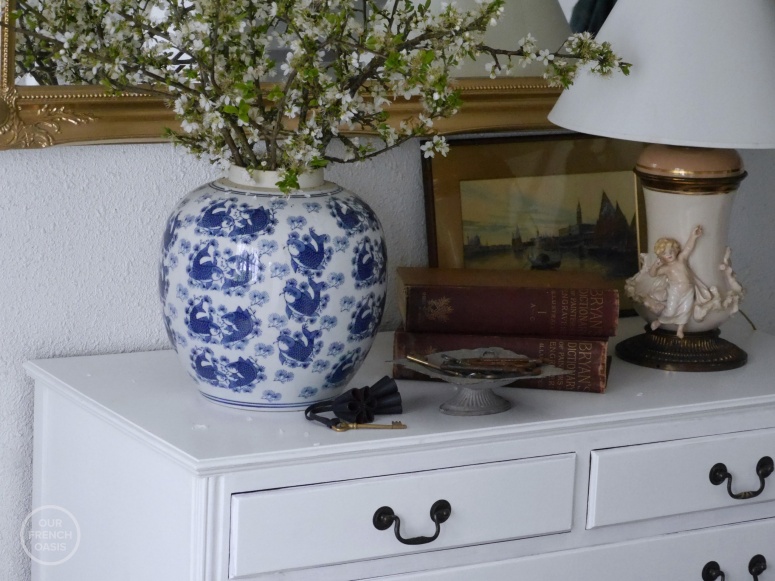 We played with paintings for hours, framed or unframed? We moved things around, took things off walls in other parts of the house before we settled on these two which were painted by a friend of ours who lives near Pau. They were originally in the kitchen, so the whole house has ended up having a bit of an update! 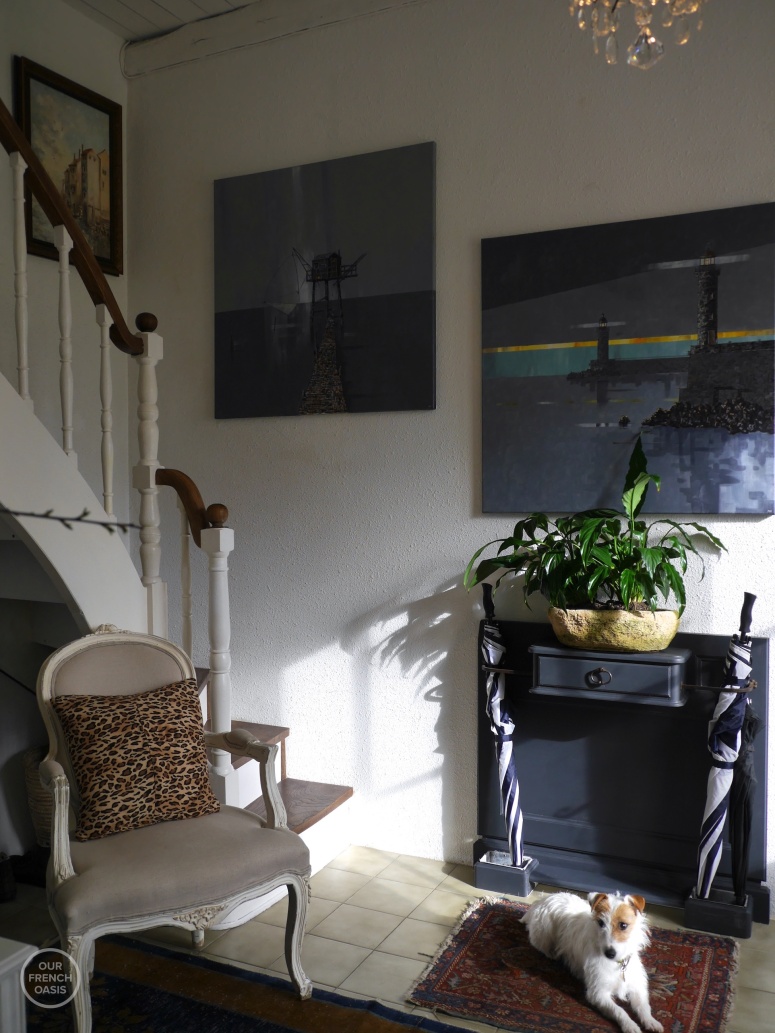 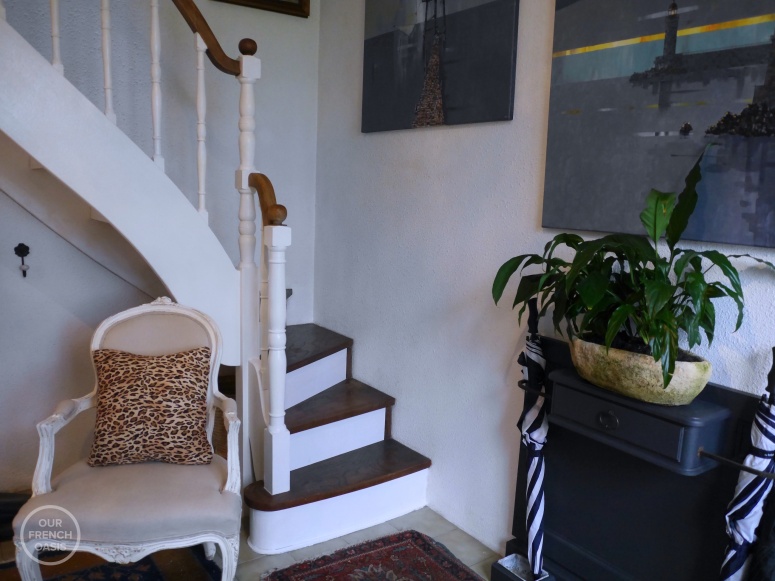 and for a little added texture I brought in this old stone plant tub from outside.

The chair came down from one of the bedrooms and one night last week, once the children were in bed, I sat and made the cushion cover, piecing together scraps of old material because I really hadn’t got time to go fabric shopping!

The room is quite small but the ceilings are high, giving it an air of being much bigger than it is. Because the stairs are so narrow it is difficult to get things up and down, larger items have to go through the ‘coffin hatch’ so named because in the old days when a person died they were often “Laid Out” on their bed or placed in an open coffin so that friends and family could pay their last respects. When it was time for the funeral the coffin could be lowered through the hole where the specifically cut floorboards were removed. Now these planks are on hinges and when we have to take something big upstairs this is the only way up!

I still want to change the tiles on the floor, but that’s a major project and one that we may tackle in the coming years, but not straight away! A big, huge thank you to Project Design for including me. I feel so honoured and you have done me such a favour, not just me but our whole family are so grateful! Plus it was so much fun! 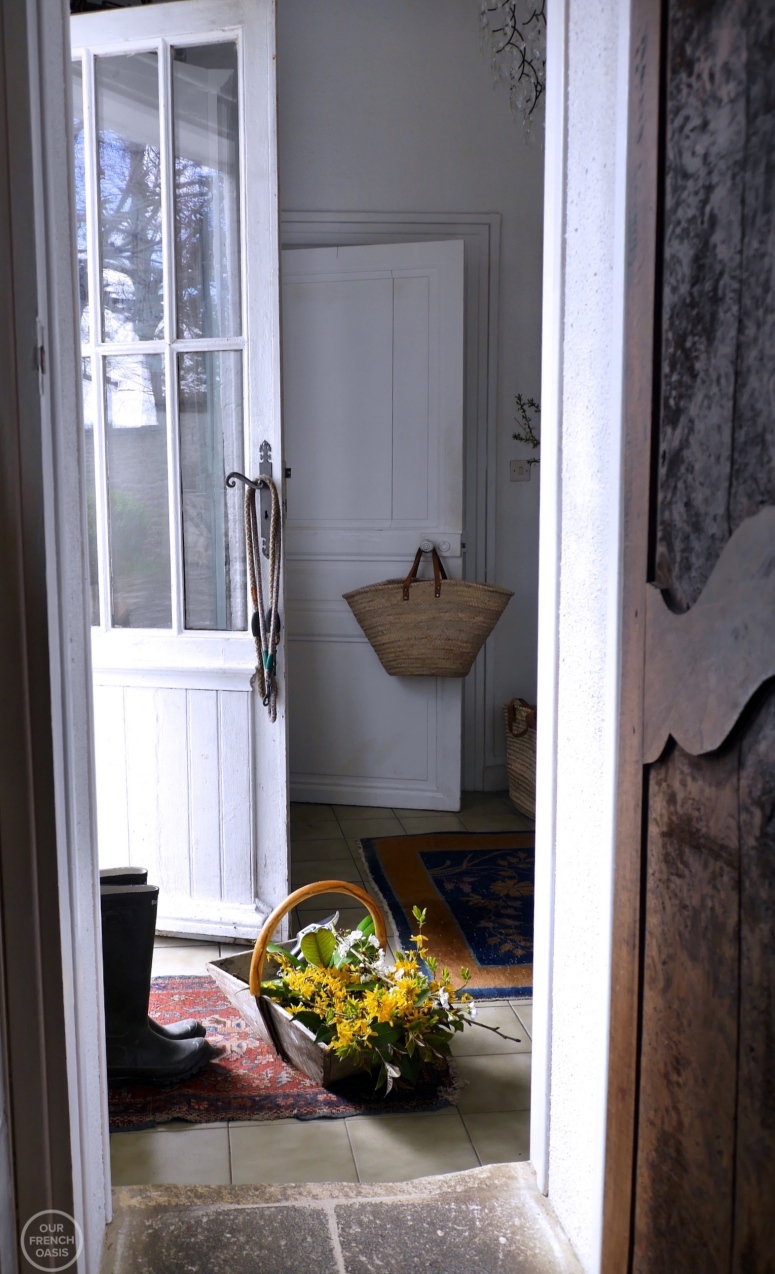 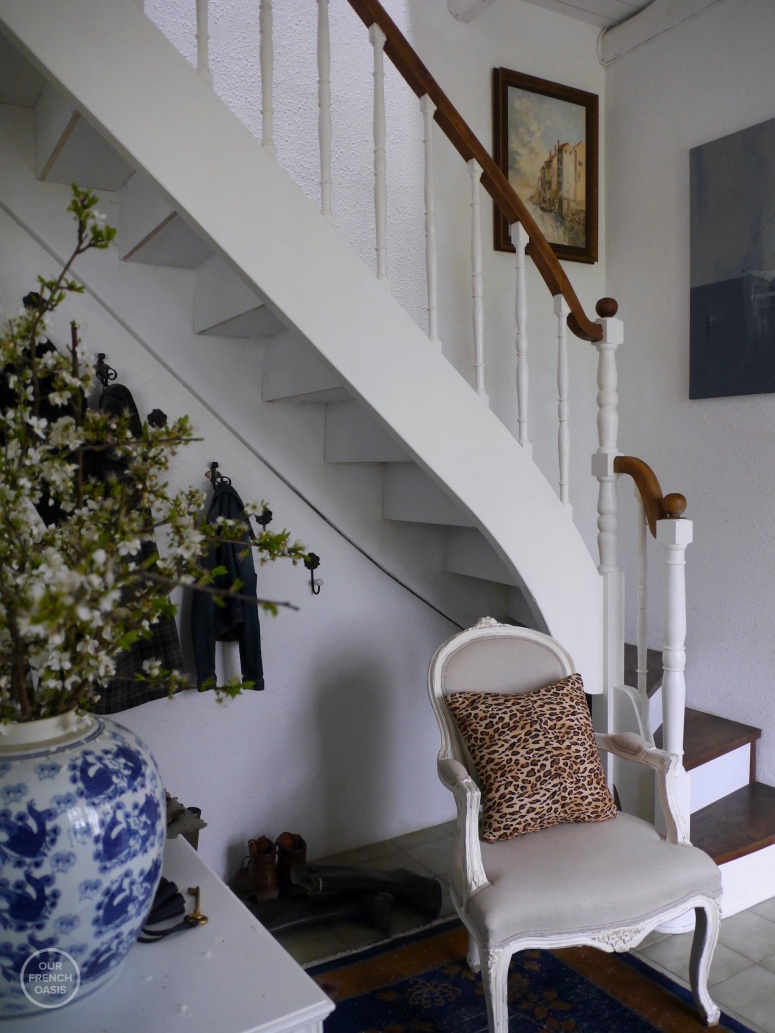 I know how hard everyone else has worked too so don’t miss seeing all of the other entrance halls from this very talented group of ladies.

179 thoughts on “Project Design: The Entrance Hall; Before and After!”