Who knew that keeping chickens could take us to so many places?  We’ve driven down roads scarcely fit for a car in search of eggs and covered two départements buying our chickens over the past two years and it’s turned out to be a far more technical business than I realised. Along the way I’ve expanded my French vocabulary as we have dealt with species, sexes, ailments and treatments. All of this for the love of chickens, our own organic free range eggs and the excitement of newly-born chicks.

First let me take you back, briefly, to the end of 2014. We had always wanted chickens and this has particularly been a passion of Millie’s, so we promised her when we moved back to France she could have a couple of hens, just two – no more! In the autumn we traipsed off into the countryside after seeing a small advertisement in the paper and came home a little later with FOUR ginger hens (Roddy was bemused by our inability to count properly). A month later, we were already so enthralled that we thought we’d expand our flock; this time we went deep into the neighbouring département of Deux-Sèvres for three more feathered friends; a pair of Pekin bantam hens and a rooster. The rooster, whom we named Fritz, is a Frizzle Pekin bantam which basically means his feathers curl out away from his body making him look extremely scruffy all the time, a real ragamuffin sort of chap. 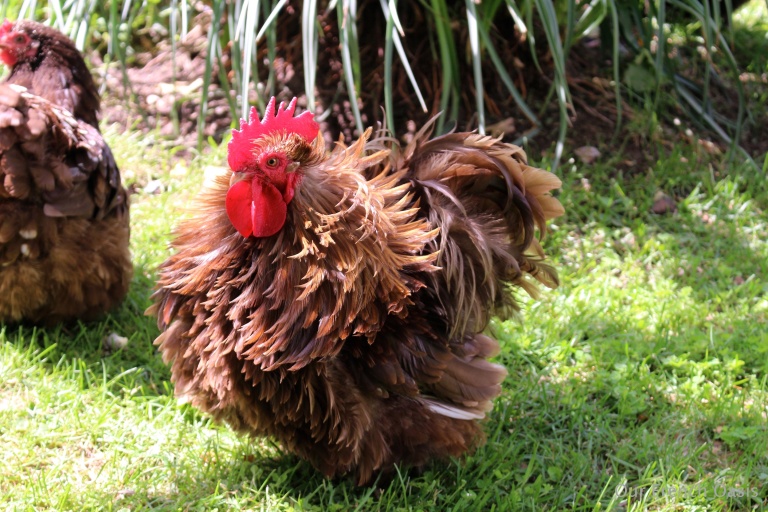 We’d always dreamed of walking down our garden to collect our eggs, and baking and cooking with them, and it came true.

And we dreamed of chicks. Last summer, two of the hens went broody (this means they get quite obsessed with having chicks and lie in a nest for days on end, pining for something – anything) and the natural course of events was to let one of them sit on a clutch of eggs we collected from the previous few days. We waited with eager anticipation, counting down the 21 days of term, and when nothing happened  we patiently waited a couple more, just in case; still nothing. With some trepidation we cracked open one of the eggs, but there was no chick of any sort inside. Dismayed, we opened the others and the story was the same; they’d never been fertilised. We knew Fritz was doing his job as we had seen him at it; we all had, several times a day. Even Gigi had gathered what was going on and the excuse of “piggyback rides” tailed off as she worked out the facts of life with Hetty’s input. Admittedly Fritz could get a bit confused with the big hens as several times we saw him facing the wrong way round with his head next to their tail feathers, but with the little bantams he made no mistakes.

In the end though we decided to cheat a little and bought some fertilised eggs, Oeufs fécondés, from a breeder. We popped them under another bantam when it got broody and again waited 21 days. Triumphantly, and on the dot, eggs cracked, squeals of joy rang around the garden under the big plane trees and four little chicks hatched.

Nearly a year has been and gone since then. We have sadly lost a couple of chickens and we have got to know the chicken vet quite well. We’ve also bought a couple more hens; well, quite a few more, in fact, several different breeds now roam round the ‘chicken garden’, as we call it. There are some French Marans, a couple of Sussex and another Pekin bantam.

This year when spring came around Fritz was a year older, and the cries of “Let’s try again!” arose pleadingly from the children. Rosie, one of our original trio of bantams, was the first to go broody as winter slowly faded. We scurried around and put six little bantam eggs under her and moved her to the small coop for some peace and quiet. Yet again we waited 21 days, and yet again nothing happened. We weren’t too disappointed because somehow, deep down, I think we expected this. But we really did want some chicks, and in particular we wanted some new bantams. They seem to be a species that truly love their garden and they reward us with far more eggs than the book tells us they should. By chance our neighbour had recently bought some fertilised eggs and gave us the telephone number of a lady selling them. She was quite close by and one afternoon after school last month the girls and I set off to go and collect them.

It was only a few kilometres away but once out into the country it’s easy to get lost. I had the address but the GPS didn’t recognise it, so instead we keyed in the village and thought we would find the house once we were there. Big Mistake! 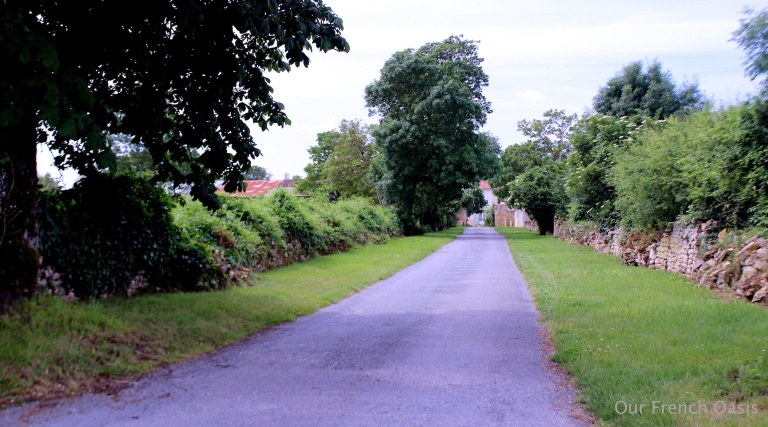 We took tiny roads and dirt tracks, but in reality we had no idea where we were or where we should have been going.

The sign said Toutes Directions so we did as it said and turned left. 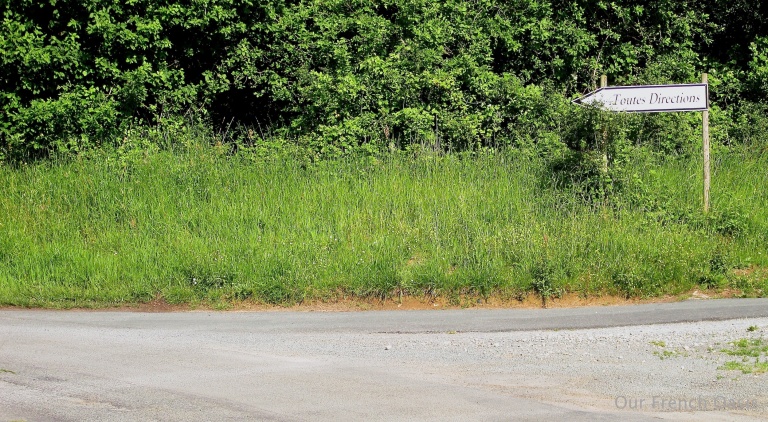 We stopped and took some lovely photos, and we found places we certainly never knew existed, but it was another 20 minutes before we found our destination. Alas, this is typical when driving in rural France, where in a lot of places even the sat-nav can’t help! 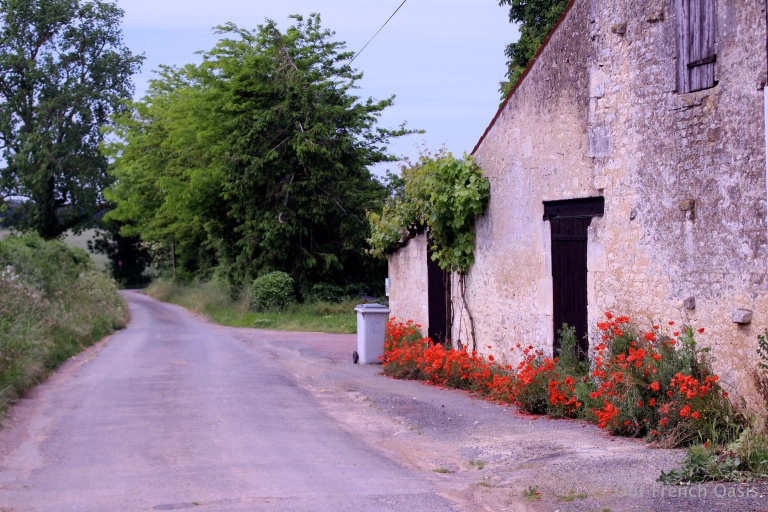 As we stood in a stranger’s garden, watching her chickens and chatting, I was quietly amazed at the new words and phrases I had learnt in French. I could never have imagined that I would be having a conversation about fertilised eggs, broody hens and sterile roosters. The lady listened and sympathised and then suggested an explanation.

“Some breeders will sterilise their cockerels to preserve their own breeding lines” she said. We gasped at the thought – but it made sense, and she was quite sure this is exactly what had happened. However, while we could understand the process, it did annoy us that Fritz had been sold to us as part of a trio, two hens and one rooster, and we’d expected a rooster who would be able to perform his duties since we had even discussed having chicks with the vendor at the time. When we got home, clutching our four fertilised eggs, I decided to ring the person who had sold us Fritz; unsurprisingly his number no longer works!

Anyway, we placed the four eggs under Amy, the latest broody bantam, and she too took up residence in the maternity home in the small coop; it was becoming quite a familiar routine. We waited the familiar 21 days. Around day 14 Millie candled the eggs one evening, another thing we have learnt to do; two looked good but two seemed unfortunately empty. This failed to dampen our spirits though and excitement once again built to a crescendo for our impending arrivals. The twenty first day fell on Mother’s Day in France this year, the 29th May, and triumphantly two little chicks hatched to much fanfare. At last we had two more tiny little Pekin bantams.

We have no idea what sex the chicks are yet, as it’s too early to tell. We’re hoping for either one of each, or two females;  what we don’t want are two roosters, so the odds are quite high in our favour but we shall have to wait and see. The lady had several types of bantams and her rooster was also a Frizzle, so this means we have a 50% chance the chicks will be Frizzle bantams, or rather ‘scruffy little beggars’ as Roddy so loves to call them! 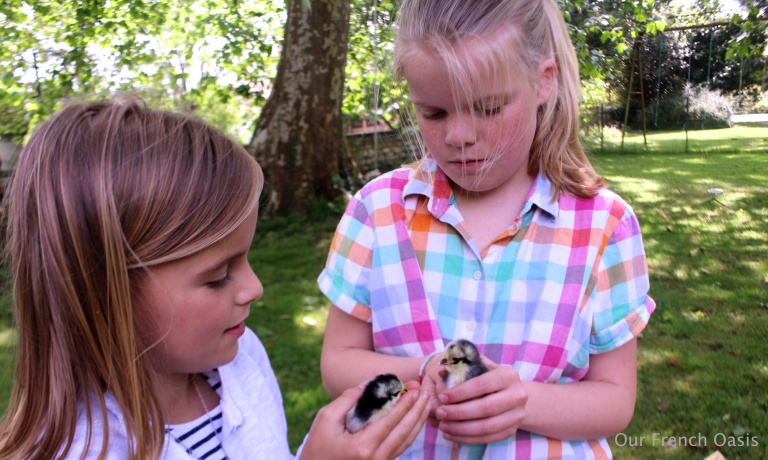 The same day, Roddy and Millie spent the entire afternoon making a new run for them; a moveable one that we placed inside the chicken garden so they can stay in it cat-free until they are big enough to no longer be a temptation. This does not stop Clara and Rory lying on the roof of the pen like leopards in a tree, and nor does it stop the entire flock from crowding around constantly, peering myopically through the mesh at the new arrivals. Several times we’ve quietly sneaked up to find them all asleep on the warm grass about the coop; it’s quite a soulful habit they have. 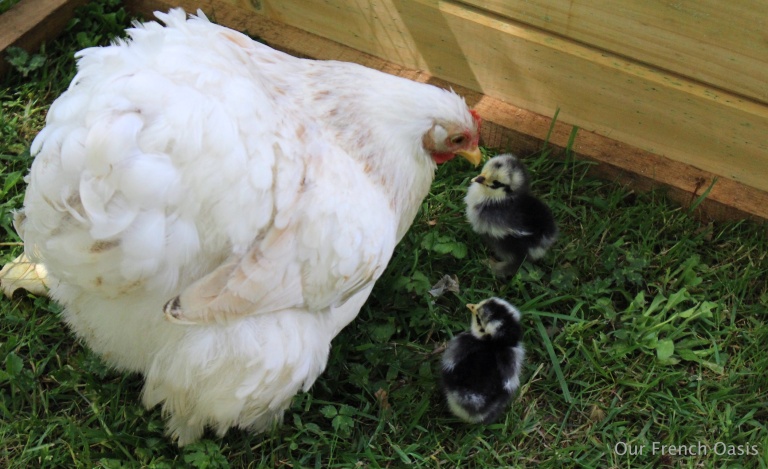 The other hens are laying in abundance now that the warmer weather is here, and we are becoming overrun with eggs; on average we are collecting six a day. They come in all shapes and sizes, and in many different colours. Chuckles, one of the original four gingers,  always lays double yolkers. Amy’s bantam counterpart Katya lays tiny rugby-ball shaped white eggs. The two recently arrived Marans lay the really dark brown eggs and we have yet to work out who lays the speckled ones.

Over time, Rosie and Katya have become more like household pets, and they frequently get brought up to the house. The girls, realising that they are not going to get a goat or a sheep or a pony in the garden, have tea parties with the chickens instead.

To cap our spring-chicken season off, Fritz now spends much of his time walking around the outside of the new run, proudly ogling the little chicks, no doubt trying to see if they look like him. Little does he know they’re not his at all, but we won’t tell him and we’ll let him carry on having fun; he’s such a character and it would be a shame to spoil his opinion of his manhood!