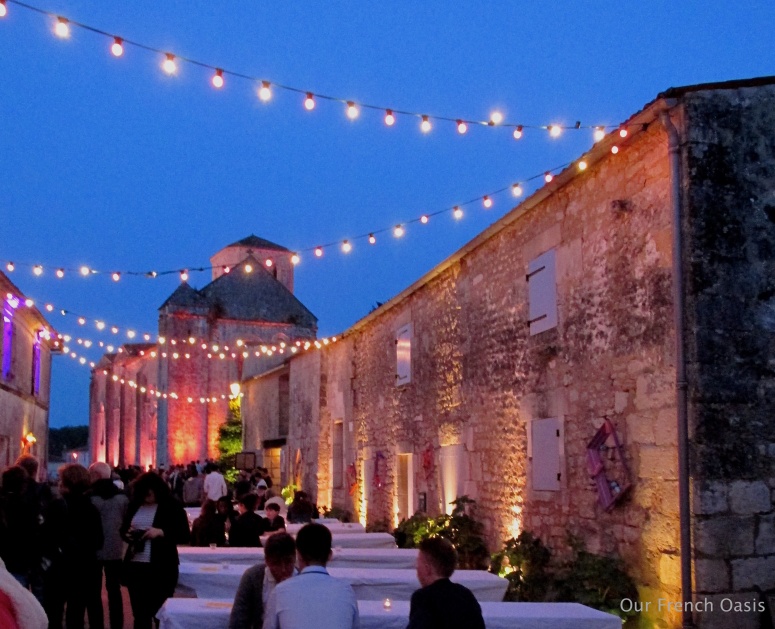 The French are exceptionally good at street parties. I remember going to my very first one in a village somewhere in southern France when I was about 20 years old and I have been hooked on them ever since. Throughout the summer little signs appear all over the place announcing the dates that each village will be having a party, or be “en fête“. In any given area during the summer months there is nearly always somewhere to go each weekend for fun, dancing, outdoor food and other entertainment.

However it soon became apparent that the fête in question was a little out of the ordinary.  There were huge signs everywhere, even in the bigger towns, that advertised something very special. This was “Cigogne en Fête” which literally means “Stork Party”. I was fascinated and realised I needed to find out more! I asked a friend who has lived in the area for a long time what it was all about.

Charente Maritime has become one of the major breeding grounds in France for storks, and we see them everywhere. They nest high in trees, on huge electricity pylons, and in specially built nesting boxes. I see them flying around the fields every day in season and they’re always out stalking the wetlands of the Marais, searching for frogs, snails and other goodies; they certainly seem to live here in abundance. However, it wasn’t always like this. Decades ago the stork faced extinction in France and the proud people of this area made a decision to try and revive the giant birds’ breeding numbers, building specific nesting sites for them in an effort to encourage a growth in numbers.

Over the years the storks used the new nests with huge success, and now the population is one of the largest and most established in Europe. The story of their triumph is fantastic, and local people started the tradition of “Cigogne en Fête” as a simple celebration of the success they had helped to start. Over the years the event has grown into a hugely popular annual attraction, and each year it is held in a different village in the area surrounding Rochefort known as Rochefort-Océan. This is an administrative area which comprises 25 communities and approximately 63,000 inhabitants in southern Charente Maritime.

The excitement had been building for over a week. Signs informed us that roads would be closed for the weekend and driving through the nearby village last week, fields were being cordoned off as temporary parking and I could see people hard at work on houses, barns and other structures; huge boxes of electric lights were being unloaded from lorries and fairy lights were being strung in between rows of centuries old houses. Street lights had been covered in red plastic to add to the ambience. On occasion I could hear faint music as rehearsals reached their peak down dusty alleys.

This was going to be quite a change for this normally sleepy quiet little village.

Cigogne en Fête is no longer really just about storks, and as an event it’s turned into a street party that is probably the best I have ever been to. This was the 17th year of the fête; it was a cocktail of music, theatre, singing and dancing. Held over two nights from 9.30pm until 1am, it surely involves every inhabitant of the village. People open up their gardens, their garages and their barns and around 20 or so different groups perform, both professional and amateur artists. 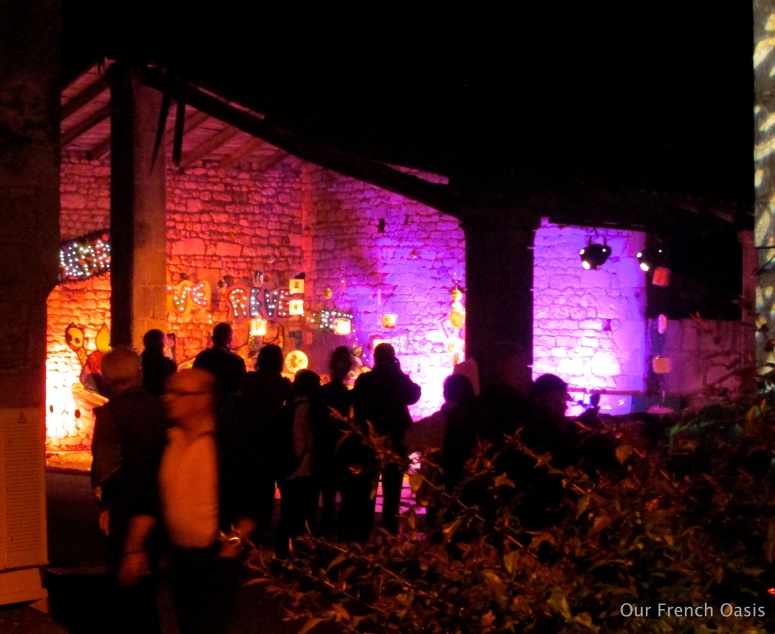 Walking around the illuminated village, down narrow lanes we never even knew existed, a show or act would suddenly appear in the semi-darkness, emerging out of some ancient front door or gracefully unfurling behind a low stone wall amongst old orchard trees. There was something to watch or listen to at every turn, sometimes silent and sometimes accompanied by music. 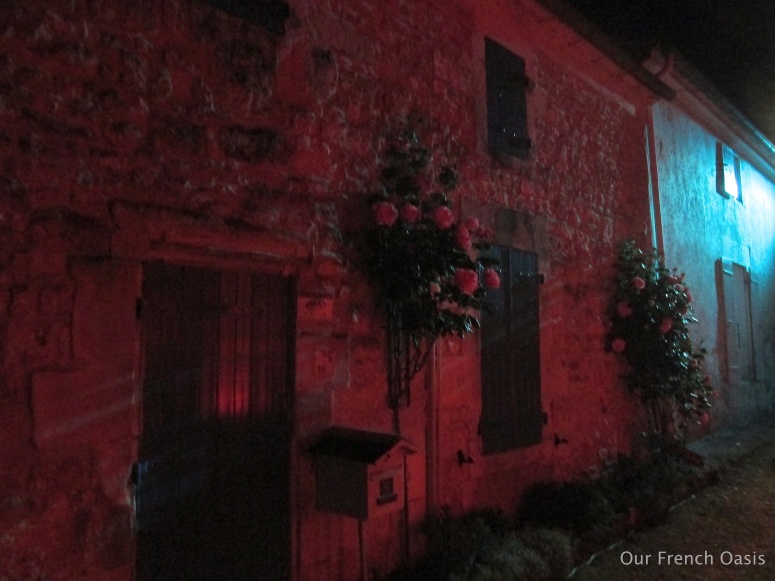 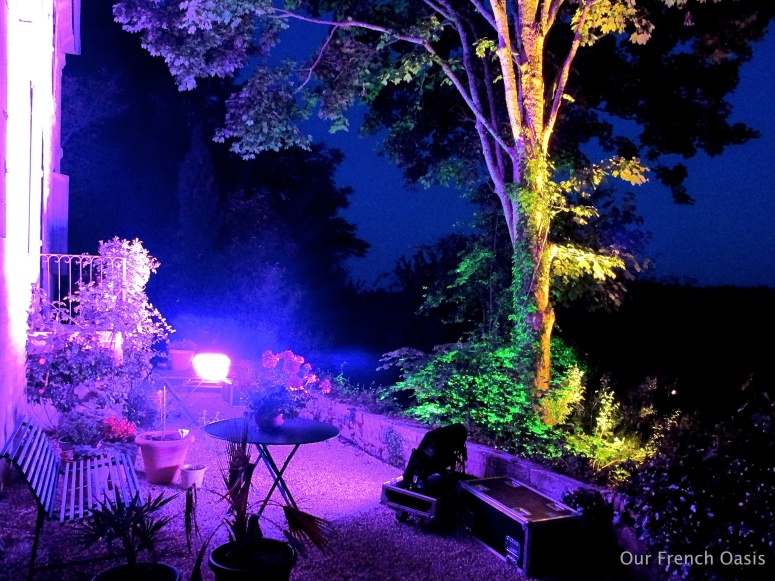 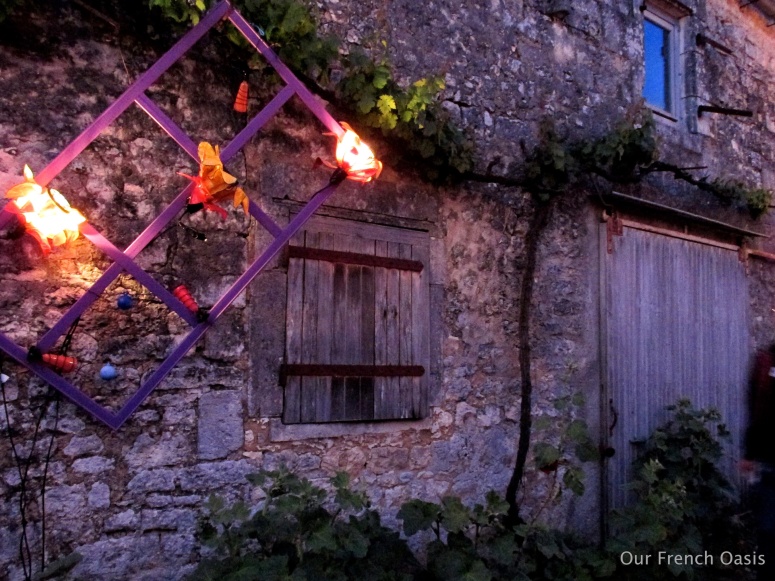 The soft summer night hummed with revelation and quiet soulful intensity. Literally thousands of people mingled together in a very understated but attentive way, thronging the small makeshift bars in old buildings where people sold refreshments, and eating and laughing softly at the trestle tables that completely filled one street; covered in white tablecloths with a vase of flowers on each one, the scene was simply beautiful. People shared bottles of wine, passed food from fork to fork and what struck me most was how good natured it all was. There was no drunken revelry; the fête really was just a huge crowd of people of all ages having the most wonderful time. 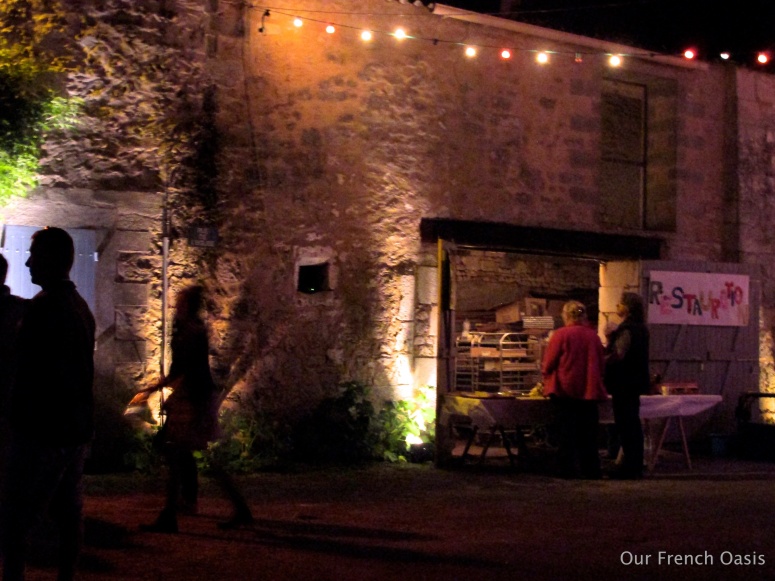 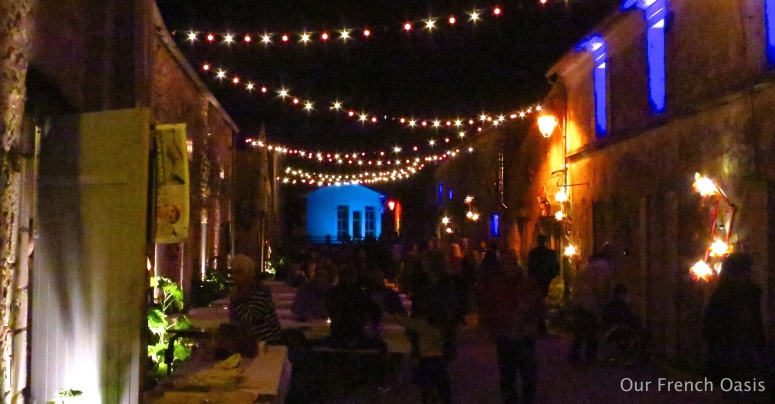 Thankfully the evening was warm and pleasant; the children found school friends and went off in different directions, perfectly safe, and a meeting place was arranged for 11.30pm; Roddy and I mingled with the mass of people and just, well, wandered. It was a fabulous, truly memorable occasion and something I shall look forward to repeating in another village, elsewhere, next year. 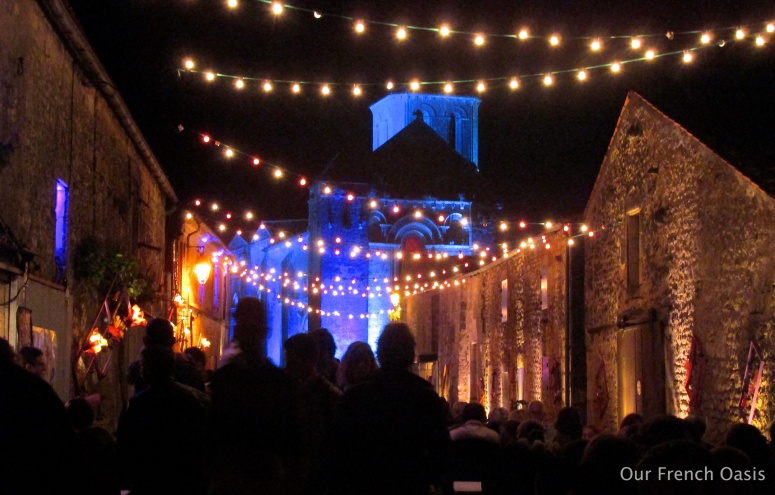 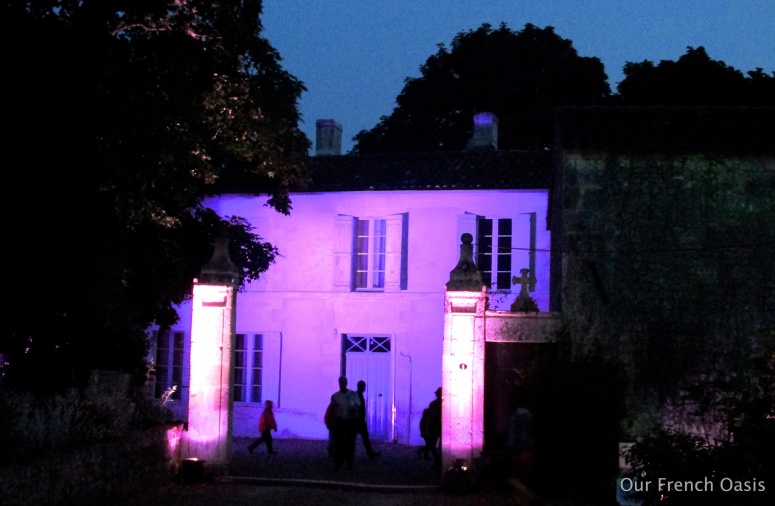 78 thoughts on “A French Street Party”