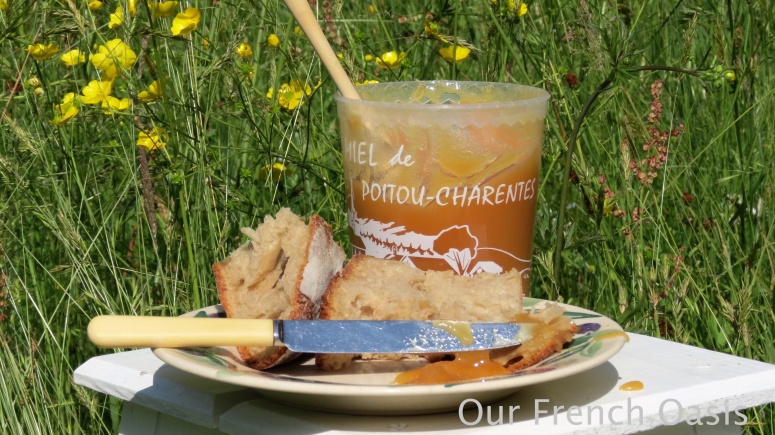 It was with some triumph that Roddy returned home from our local market a while ago with a bag of milk. I looked at it in some surprise but a closer inspection revealed the words “lait cru.” Roddy stood there grinning at me, and I realised he was as excited as I was becoming – this was raw milk, unpasteurised and fresh from the cow as nature intended it to be.

I grew up on a farm, we didn’t have any dairy cattle but we did have two ‘house’ cows, they were milked twice a day. I drank that milk from the age of 6 months old and although I am not a great “glass of milk” fan, all sorts of memories came flooding back with my first taste of that lait cru. Our milk went straight into a pail and was brought up to the house, my mother would then strain it through a muslin cloth into jugs which went in several directions around the farm to different people.

Whenever we can we buy raw milk because the taste alone far outweighs that tiny, minuscule, infinitesimally small chance of drinking something bad. This, coupled with the benefits many people feel it provides, especially for asthma and eczema sufferers, makes it a better time to return to nature than ever before. The French in particular love raw products and here it’s easy to buy raw milk, raw cheese and raw butter locally.

Going back to nature seems to be a recurring theme this year and quite by chance we’re now eating ‘raw honey’ too.

The extraordinary mechanisms of the bee world attract some special people. I rather think most apiarists keep bees more for the joy of keeping them than for any sort of economic return, or just perhaps because they have a sweet tooth. Last week, I travelled deep into the interior of the Poitou-Charentes, into the heart of the department of the Vienne, some two hours away, to meet one of those special people, Chris Luck. A man with a passion for bees, and for almost anything else that flies, buzzes, crawls or swims.

I’d tried to visit Chris for a while, but spring and early summer is the swarming season and he is at the beck and call of the telephone, hurrying here and there to examine, plan and deal with swarms as they are reported. A typical day ends very late as the best time to move a swarm is after dark, when all the bees are back in place and feeling calm. Running around the countryside after dark in a little Peugeot with several hives in the back is something I still have to experience, but I can imagine the potential pitfalls. The day I visited, Chris had nine transient swarms on the property waiting for new homes and he was also working out a variety of ways to save a colony that was now at the bottom of a five storey chimney-flue after a botched rescue attempt by a builder.

It was somewhere beyond the town of Melle that we phoned Chris on the outskirts of a small village and he appeared from down a dusty lane to lead us back to his kingdom. He and his partner Lynne have been in France for more than 20 years. They have over three hectares of old French countryside that they have deliberately let run wild, an oasis of organics surrounded by cooperative-run farmland with its burden of sprays, fertilisers and paperwork. Their house looked a little lost and camouflaged amongst the trees and growth, but the instant we stopped the car and opened the doors, the benefits of letting nature run its course could be heard and seen. A heavy continuous drone of insects and a constant chatter of birdsong vibrated from every direction and in the sunlight bees could be seen travelling hither and thither, golden motes caught in the late afternoon sunlight.

We’d ostensibly come to buy honey, six fat kilos of home-spun goodness with nothing added or taken away, but in the end the purchase was just a bonus that ended an early evening of education, philosophy and natural science. I admitted to knowing little to nothing about bees, but by the time Millie and I left we knew a great deal more! We tried to visit the hives but could only get so close before the bees made it plainly clear that on this particular day there was no easy way through to their lodgings. 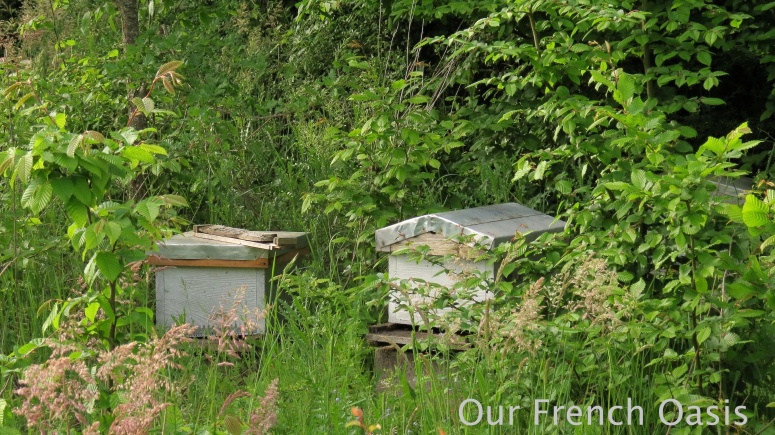 He has several dozen hives set back in the depths of his trees, but with a selection of them harbouring recently relocated and slightly annoyed swarms, it seemed a sensible decision to stay clear and see his bees at work by the cottage. Here, Chris had laid out several trays of compost in a water-tray for his little friends, and a steady stream of bees circulated, carrying water back to the colony. Around us was a veritable container garden of all sorts, utilising a variety of plants to attract and nourish his bees as a part-time destination on their foraging. The cottage was surrounded by huge swathes of blackberry bushes housing  a whole host of birdlife that was obviously enjoying Chris and Lynne’s garden as much as his bees and other insects do. His love for bees and their welfare was obvious, as demonstrated by mild interruptions to our conversation as he would lean over and rescue a drowning bee from the water tray. Over a cup of tea in the depths of the low-ceilinged cottage we learnt a great deal as the early evening started to cast shadows about the greenery. 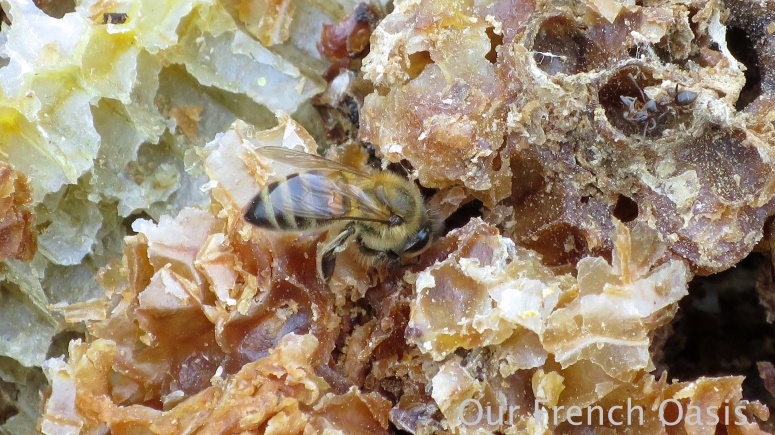 Each day at sunrise in the hive, the worker bees gather at the entrance to the nest and those ready for flight duties set off on their tasks. Some fly to fetch water, others to search for nectar. Another group will gather pollen and a fourth will go into the greenery to look for sap and resin to make propolis with, a substance which the bees use to repair the hive. Some workers stay in the hive to clean and nurse the eggs, larvae and pupae, and a further group will guard the hive from attack. Every bee in the hive knows its duty each day and peace and harmony are par for the course. There is no shouting, whistle-blowing or a bee with a clipboard dispensing orders; no, the bees know just what they have to do.

This may all seem quite inconsequential to most people, and of no importance, but there is something in the hive’s regime that is quite astounding, even miraculous, and it’s a mystery that apiarists have been trying to solve for centuries. For from day to day, the numbers in each group of bees going about their tasks in the hive vary. You’d assume this was normal too, unless you think about it, and watch the hive at work. For as more water is needed than pollen, so bees change duties, and as more propolis is needed to repair a crack, so more bees head into the trees, and so on. Not a word is exchanged, no commands are echoed through the waxy corridors, there is nothing to be seen or heard that indicates just how the bees communicate not only what is needed, but who is chosen to augment the seekers. It’s a miracle of minute communication, be it electrical, pheromonal, a question of vibrational frequency or even a chemical that affects the nervous system, no one knows; one morning 10,000 bees may go and search for nectar, and the next day it may be 20,000. When more water is required the number of water-carriers mysteriously grows while the pollen seekers dwindle in number. Something very clever happens in a bee colony that mankind has not yet been able to solve. 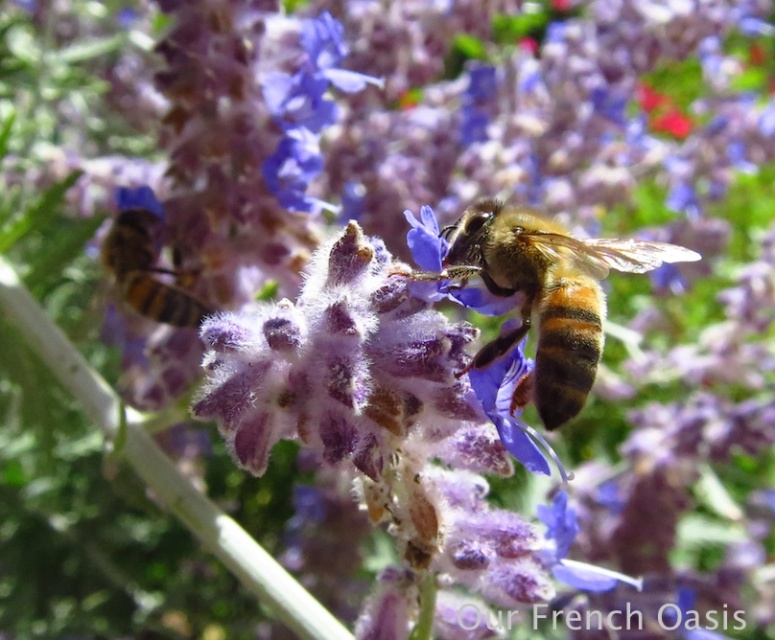 Fascinated I asked Chris how they had come to live in France. In the  1990’s they had found themselves in the Vienne, and on an impulse had bought the land and house. Situated in a quiet hamlet, Chris mentioned with a rueful grin how the neighbours had changed somewhat over the years, and how a largely rural community was now  somewhat fragmented and had been replaced by long-distance tenants from the richer environs of Paris and London. Along the way farming practices have also altered, creating a landscape so very unnatural for bees and insects that he admitted to dark thoughts about the future for not only his bees, but also the honey industry itself, and possibly the countryside as a whole.

It was a sad note to leave on, but as our box of honey-pots in the boot of the car slid around with each turn of the small country lanes, I hoped on our way back home that as long as there are men like Chris, then there will always be outposts of bee territory, and honey to take home. Bees, of all varieties, are so terribly important to nature.