May is a month full of public holidays in France.  I admit that I get just as excited as the children at the prospect of three days without school, or maybe my excitement is just the fact that the children are going to be home for three days. Either way, the extra 24 hours is always an added bonus. At this time of year there is so much to enjoy in the Charente Maritime. This is how I love to spend a long weekend. 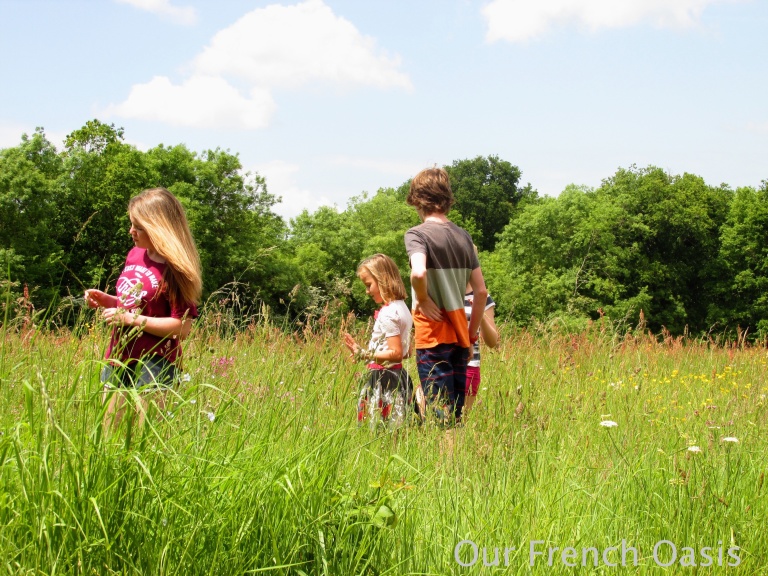 This post started out titled, “The Holiday Weekend”, but then we noticed that Gigi seemed to feature in a lot of the photos and so I renamed it “The Gigi Post!”

Ideally every weekend should involve a really good walk with the whole tribe. The suggestion of a long hike evokes a different reaction in some compared to others. The dogs of course leap around ecstatically at the mere mention of the word ‘walk’ or if we simply touch the dog leads. For Roddy it’s a chance to grab his camera and indulge a little in his passion for photographing insects and wildlife. Some of the children will jump at the idea and others will be a little more reluctant; the latter have to be coaxed out of the gate  with all the usual talk about the benefits of fresh air and the importance of exercise! But one thing never changes; within ten minutes of leaving home and after skipping down some narrow tracks and through the grass, everyone is glad they came and no one wants to go home! 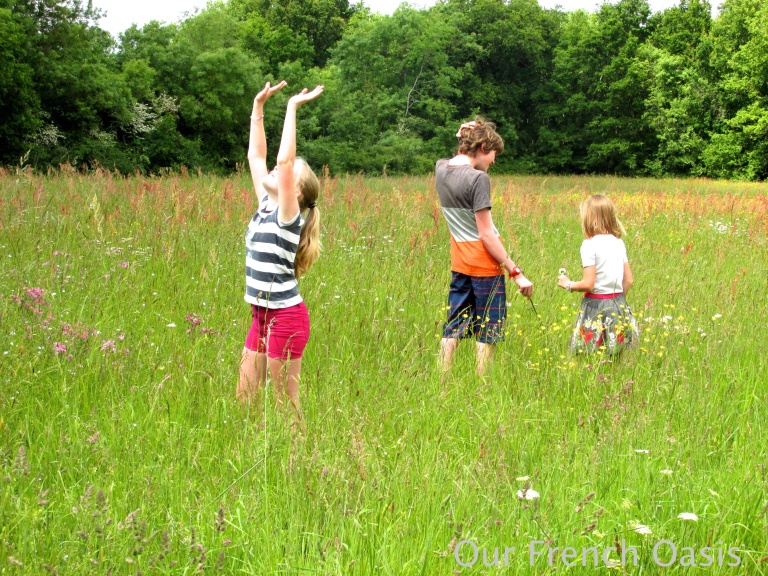 We go through villages, across fields, and down by the woods. It’s quite impossible not to have fun and not to be totally absorbed by our surroundings. The hedgerows are full of wild flowers at the moment. We take a few to put in a vase at home, but we only choose a couple from each place; I call it ‘responsible picking’, leaving plenty to self seed for next year.

Another bonus of the warmer months is that the tennis court beckons a little more invitingly. We can play in shorts and a t-shirt rather than being bundled up against the cold in full winter kit. No weekend would normally be complete without a good game. However this weekend’s tennis match was no ordinary game. We didn’t drive any of the girls to a lesson or have a typical family battle on our village court where competition can be fierce and extremely vocal! Instead we headed out very bright and early to Garden Tennis Royan, where the Junior Regional Tennis Finals were being held. Gigi and another girl had been selected a couple of weeks previously to represent the Charente Maritime in the 9 year old girls doubles finals and they were to play the three other Departments (like a county) in our Region – the Deux Sevres, the Vienne and the Charente. This was a great honour and one Gigi took very seriously. She has grown to adore her tennis and plays between 6 and 9 hours every week, working hard with a great deal of dedication and the help of a fantastic coach.

After a very long day of matches of which they won two and only narrowly lost another, Gigi and her partner came second and claimed the Runners-Up trophy, which meant they found themselves on the podium at the prize-giving late in the evening. Now, like all parents I often share photos of the children; they’re a part of this story and our lifestyle here in France, but rarely, if ever, do I talk about their achievements. It’s a British thing I think, which involves a reserved upbringing and some application of modesty. But I had to tell you all, partly because it was a huge part of the weekend, but mostly because as a mother I was so immensely proud of her, and I nearly burst with pride. Our little 9 year old plays like a pro and hits the ball like an adult!

There could hardly be a more stunning setting for a tennis club, and indeed many consider Garden Tennis Royan to be one of the most beautiful and prestigious clubs in France. It is also one of the oldest having welcomed its first players in April 1914. The fourteen outdoor red clay courts (and three indoor courts) are a striking contrast to the blue sea in the background and the club is flanked on two sides by a coastal path lined with fishing huts. The tournament included the top players aged from 12 to 18 in the Region, all future champions in one way or another, for sure. The winner of the 15 year old Boys could not be at the prize giving as he had had to leave to fly to Poland for an International competition as soon as he had finished his match, which is a good indication of the level of play that day! 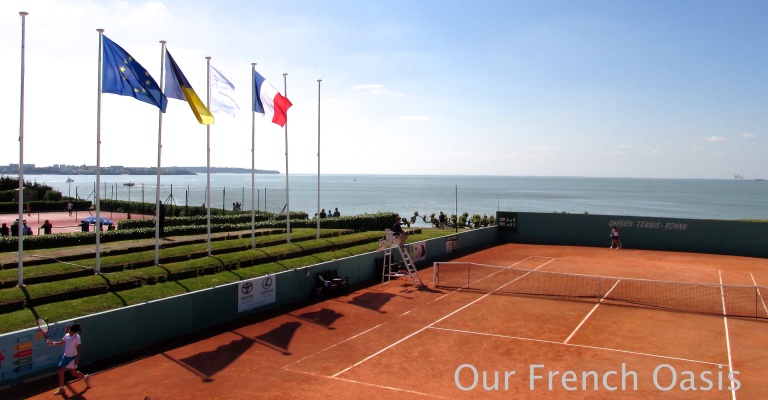 Royan is one of those places you either love or hate. Its history has dictated the architecture of the town and it is very varied, with a timeline that goes back as far as the 11th Century and before. Royan has always offered a safe anchorage for boats at the mouth of the Gironde Estuary between the main ports of La Rochelle and Bordeaux, and in the 1800’s it became a very fashionable destination for city dwellers in search of clean fresh sea air. As the years passed the population grew and it became a highly desirable and stylish resort. During World War II the entire city suffered extensive bombing during the war and then suffered from bitter fighting during the invasion of 1944 during which much of it was destroyed; this led to a period of reconstruction in the 1950’s which was largely modernist in style. Today the shoreline is decorated with elegant villas which blend incongruously with the traditional fishing huts of the area and it’s a rather charming mix. It certainly has style but it’s not to everyone’s taste. Royan also boasts five different beaches and a large modern marina plus a terminal where you can board the ferry which bumbles across the short stretch of water to the wine-growing region of Médoc opposite.

As always, food played a large role in our weekend’s activities. The markets are bursting with new seasonal produce, and there is suddenly so much on offer; it’s almost like Christmas-time for the foodies amongst us. Artichokes are everywhere, and not only can you can buy them at produce stands but I’m also seeing them in every small potager in all our local villages. The children were not used to them when we came here and wrinkled their noses, unsure quite what to make of the new taste. However, with some of Roddy’s famous vinaigrette they have come to love them as much as we do, now they are just another seasonal offering that cannot be missed.

To end a long weekend perfectly, there has to be a shared meal with friends. In this case it was a simple barbecue in the garden and a pretty table. 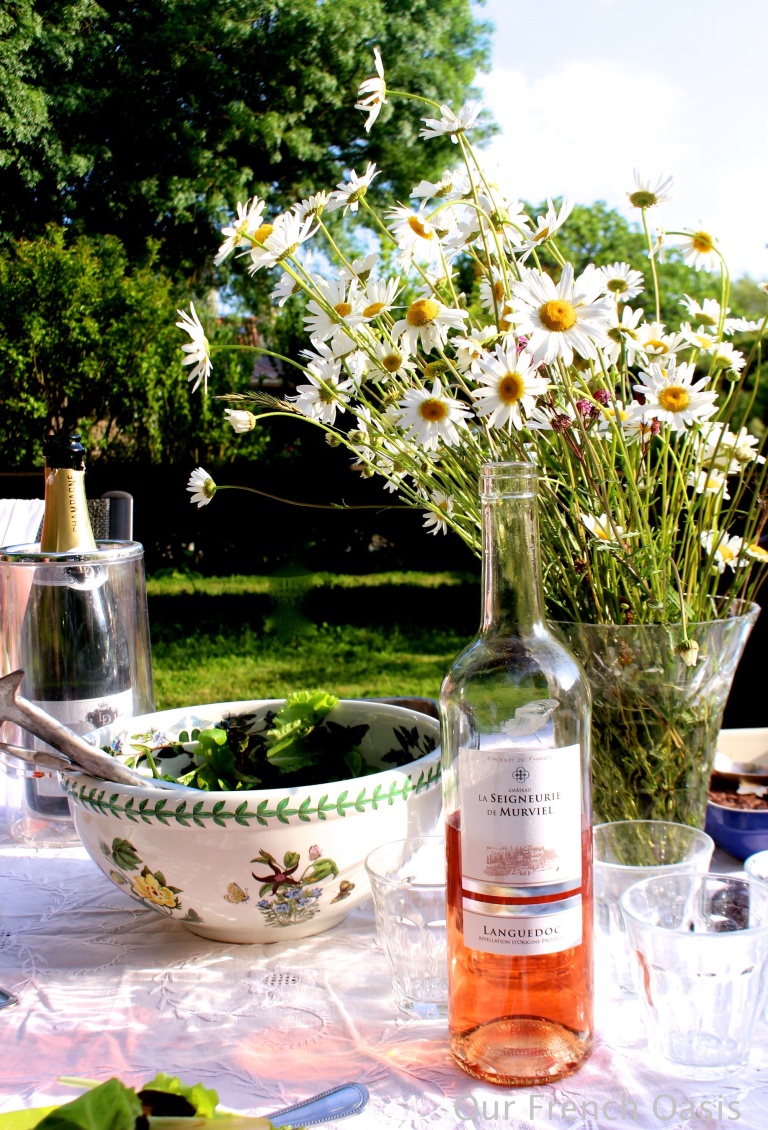 Casual is the name of the game as always. I prefer a relaxed laid-back style which allows the company and the food to take centre stage, where eating and sharing good homemade dishes from local produce leads to much laughter and chatter. 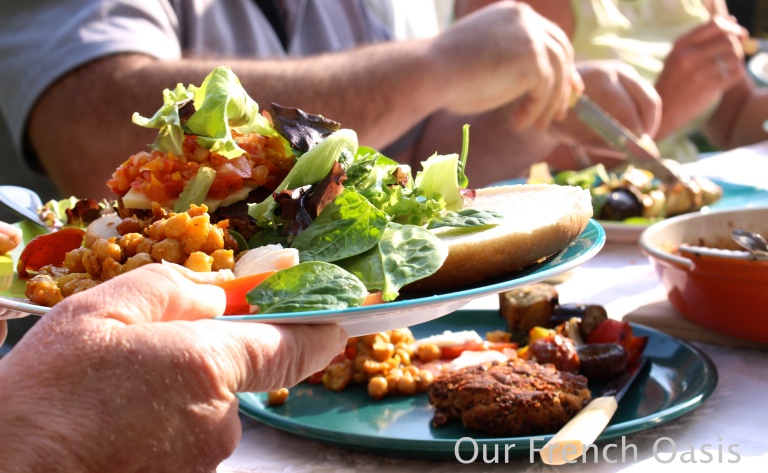 The apple pie below is every bit as delicious as it looks and is very easy to make. Simply blind-bake the pastry for 10 minutes in advance. This time around I used puff-pastry as I had a homemade parcel of it leftover in the freezer. Usually I make a simple shortcrust; if you’re in a real rush you can always buy some ready-made pastry, but do use the plain variety as the pie really doesn’t need a sweet base. For the topping you’ll need 8 apples. I use six to make an apple puree. Peel and chop them and steam in a saucepan with a tablespoon of water. Another little tip I picked up from Jeff, our American ‘chef in residence,’ from a couple of weeks ago, was to always use a variety of different apples as this brings out the sweetness and flavour. Simmer until they are soft and then blend or mash until smooth and spoon over the pastry base. Peel and chop the final two apples and arrange in slices over the puree. Bake for 15 minutes in a medium oven at 180C (350F). Serve hot or cold with fresh cream or ice cream. It could not be more natural. 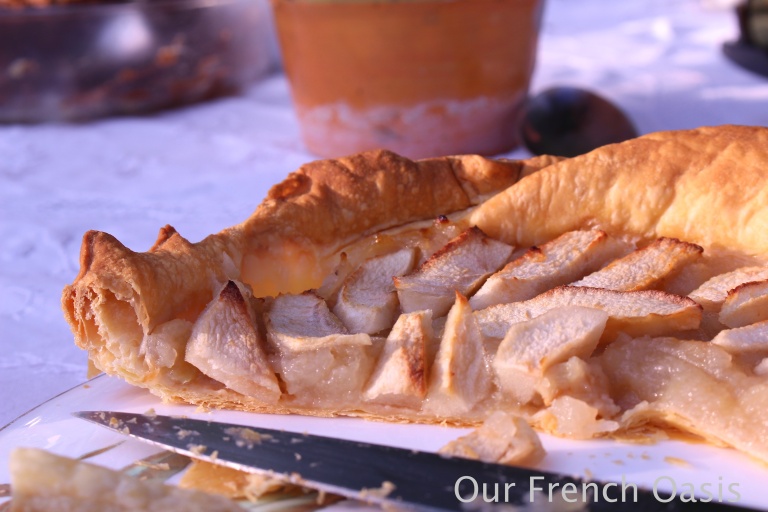