Far down the garden in the potager, I stopped digging and listened carefully. It was early evening. The first small insects of the season were swirling like dust motes in the dying sunlight under the blossoming horse-chestnut, back up towards the house. The noise came again, and I recognised the faint sound of jazz as it floated down across the lawn in the gentle breeze. Intrigued, I wandered back up toward the house with a clutch of eggs from the hens and realised that our guest in the gîte was making good use of the new bluetooth-speaker.

Spotting movement through the window of the little kitchen I knocked on the door with the offer of an egg or two, and found Hetty and Gigi hard at work on the old marble counter. They were carefully folding a large dollop of puff pastry into shape under the watchful eye of Jeff, our trans-continental guest who’d arrived a few days previously to realise his dream of moving to France. Our new American friend had prepared his version of entente cordiale and we were about to be guests for dinner in our own gîte for the first time, a prospect that intrigued me immensely.

There is something quite surreal about being invited to dinner in one’s own home, even if it is just the guest-house. I know every inch of that little cottage as I planned its renovation and decoration with Roddy. I have spent hours just sitting inside sensing what it would be like to stay there, but until last week I had never actually sat and eaten a meal at the dining table!

I doubt the little kitchen has ever seen so much activity. Jeff had been hard at work all day and I had scarcely seen the girls; they were totally engrossed in learning some new skills from our resident for the week.

But first, let me first tell you a little bit about Jeff himself, because this is the crux of this story. Over the week I spent much time chatting with him as we drove around country lanes, looked at some houses together and discussed others he’d found listed on the internet or had seen in some local agents’ windows.

It’s not often you have a person who’s keen to relocate from one continent to another as a guest. As this is something I suspect many of you have dreamed of doing I thought I’d ask him a few questions which might explain why someone would move thousands of miles (on their own except for a cat) to start a completely new life.

Jeff, can you tell us a little about yourself? “I’m from Seattle, and I’m 58 years old. I’ve worked for the same company for 20 years and currently live in the steamy environs of Memphis, Tennessee. I’m a pretty careful planner and have managed to get to a stage in my life where I can afford to retire early. I have always loved France and plan to move here permanently with my cat, Bunter, sometime in the next 18 months or so.”

How many times have you been to France? “Oh, that’s a hard one to be exact. I guess it must be at least 8 or 10 times over recent years, although I’ve been coming here since the early 80’s when I learnt to cook in Paris during another part of my life.”

Where did your interest in food come from which led to you training at which school in Paris? “I guess I was a typical American cook really, until I went to Paris. I’d always loved food and its preparation.  When I thought I had made the right career choice Paris seemed the logical place for a good education and so I enrolled at the La Varenne cooking school. My ex-wife who was half French was the translator! In the end I never became a professional chef but I always retained my love of the kitchen and what it can produce and I do some serious entertaining with my friends back home.”

Why France? “I think it has to be the way of life that seems to be the constant thread of French culture. I have always found folk here to be terribly tolerant, polite, and willing to let you do what you want without being too interfering. I think many people make a snap-decision of French character based on a few turns around the Champs-Élysées during rush hour, and that may be a good reflection of Paris in general in some ways as life there can be quite frenetic at times. But outside of Paris I think things are very different. For me there are few places that have the mix of way of life with things that are important like climate, good food, good wine etc etc. France has had a turbulent history and I think over the years this has made the French a much more tolerant nation than people believe.”

Why the Charente Maritime in particular? “I’ll confess that this area was never at the top of my list when I started planning. I’d always hankered after the Dordogne, or the Loire perhaps, but after many visits and hundreds of hours of driving, I’ve found myself gravitating towards the west and the smell of the sea. I guess it’s because I’m a Seattle man, where the west coast of America is in close proximity. I find the climate here in the Charente Maritime milder in all seasons, and so close to the coast  I think it’s pretty much perfect. When I started reading your blog I thought it encapsulated pretty much everything I wanted to have, so that’s the prime reason I’m here in your guesthouse! Apart from cooking my biggest passion is gardening and having a long growing season is a major prerequisite for me.”

When are you going to come? “I’m hoping to be here by the end of the year, though it may take another 12 months if I find something to buy that is currently over the budget. You know how these things work!”

What are you looking to buy? “I’m hoping to find what I guess would be everyone’s typical dream property; old, lots of charm, some really nice traditional features, a good-sized garden (preferably with some stone walls, please) and most likely in a village. Initially I thought I’d want to be in the country, but staying here has opened my eyes a little to the fact that you ARE in the country, even if you have neighbours! To be brutally frank, I would have bought your house!”

What are you looking forward to doing in your house? “Not a lot to be honest. I hope there’s nothing to do though to be fair I know that I’ll rearrange the kitchen to suit me. I’d just like to unpack, puts some plates on the shelf and then hit the garden and start planting. That’d be heaven. However, if I find the perfect ruin, then we’ll start at the base end and I’ll rent while we do things. I think there might be some advantage to doing it that way and I’ll be able to design the perfect kitchen – which I love doing.”

Will you have a dog too and chickens? “I might possibly have a dog and I’d have to say absolutely ‘yes’ to chickens. I have always loved dogs and used to show old English Sheepdogs in a previous life. I just haven’t had time for them in recent years as I travel so much, but it could well be a good time to rekindle my love for them.”

Do you speak French? “I speak enough to get by, especially if there are traditional culinary terms involved, but I am willing to learn the hard way. It’ll be impossible to do anything unless I do!”

What are you looking forward to doing in the Charente Maritime?
“Gardening is going to be top of the list, and then seeing things I plant come through to maturity. Though to be honest, after driving here for a few days I can see there is a lot here I want to visit and look at much more closely. Rochefort seems a really interesting town and having learnt of its unique past I can understand why. I mean, France is pretty fascinating everywhere when you look at it, but there just seems to be so much history here tucked under the surface. “

Over the week, I think I got a fairly good idea of what it was Jeff was looking for. Most of all he wanted a house with character and also enough land where he could realise his dream of retiring to France and gardening. Some of the houses we passed together might have been just the right place with some subtle alterations, alas many weren’t for sale at all! 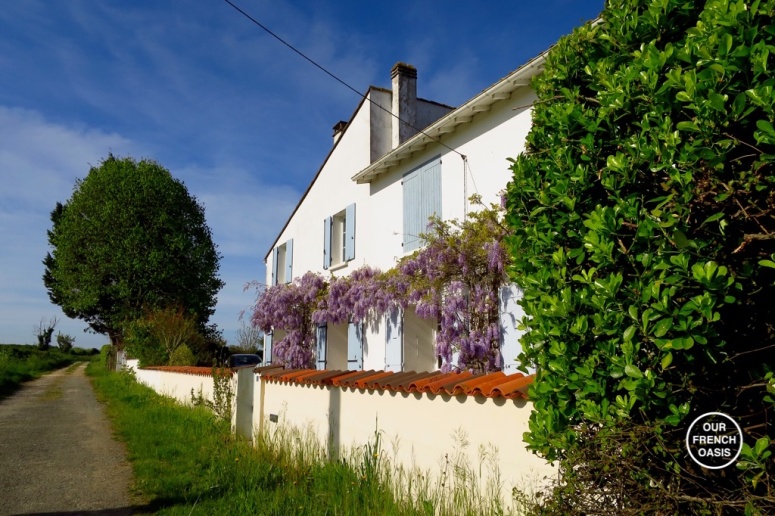 It was interesting to see that by the end of the week Jeff had become not at all averse to the idea of buying a total ruin, so long as it had four walls of good old stone and a roof. 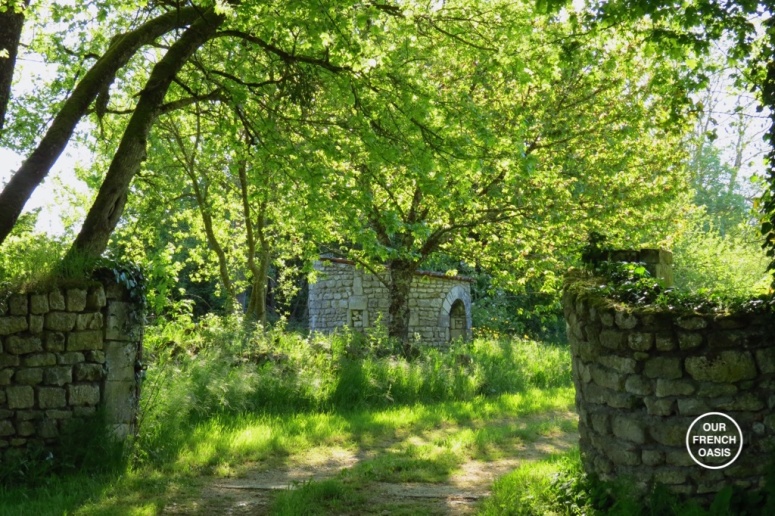 That old stone! It had to be a feature and ideally the garden really did need an old stone wall too

and some well established trees; you have probably gathered by now that the garden really is of prime importance

and preferably there should be a local bar in the village, within walking distance (or at the very least cycling distance) to a beer at the end of a long day toiling on the land.

But let’s go back to the beginning of this post and Jeff’s love of food. We naturally took him to our local market where we introduced him to the fishmonger, then the cheeseman, and after that our fruit and vegetable lady; he bought from all three, and came home with some superbly fresh produce that we were to enjoy the next day for dinner. I admit that by the time he and Roddy had finished with the cheeseman some considerable complexity had gone into the following evening’s cheeseboard. The menu, a thoroughly French meal, was influenced by three countries; eaten in France in a house owned by English and cooked by an American. 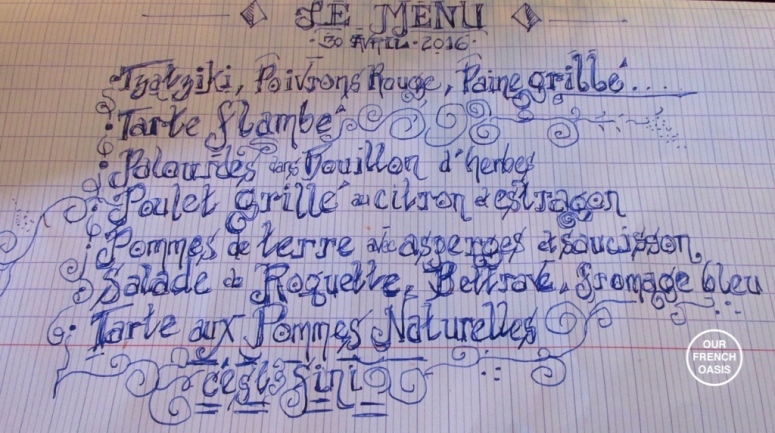 76 thoughts on “An American Dream”