Perhaps we have to endure the wind and the rain and all that winter can throw at us in order for us to enjoy the spring and the summer? 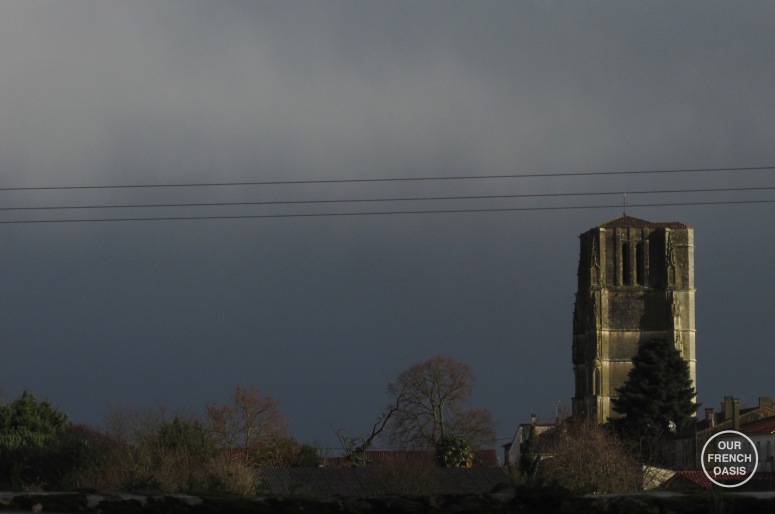 We have been attempting to forecast the weather since the beginning of recorded history. Long before the invention of radar and other meteorological tools, people relied upon nature to give them a clue as to what the weather would bring.

“Can you get some strawberries when you go shopping today?” – “No, it’s winter!”

These are the same questions I get asked every week by our two smallest people at varying stages of the day; the weather-related ones usually arise as I am trying to get the two teenagers out of the door for school, put on my coat, pick up Evie to take with me, find my phone, grab an umbrella and remind the same two little ones that if it should be fine they are walking home.

I answer on auto-pilot, “It’s winter.”

But don’t get me wrong, much as I hate winter, I also love winter – not for itself as I can’t pretend to love the bare trees and dormant garden or the quiet streets where not a soul can be seen, and nor can I pretend to adore the empty markets when all that is on offer never seems to change: winter greens, potatoes and carrots. No, what I like about winter is the promise it offers of spring and summer; for surely winter is just the prelude to the months that I love so much? If we did not go through winter we would not revel in the first cherries, the first meal taken outside, and spring and summer would become normal rather than ‘special’. So I have come to an agreement with winter, I’m ok with it. 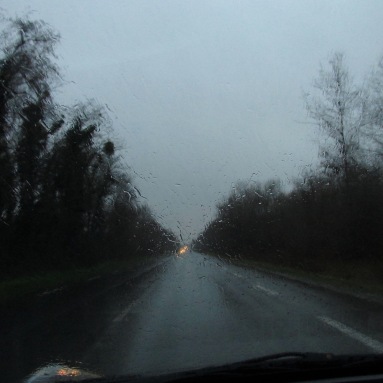 December was gorgeous, December was one long Indian Summer; but then December is always good no matter what the weather, it’s a festive month. January normally starts with a bang but fades into insignificance, which this year has been a very wet and soggy insignificance. This year February is continuing in the same vein with severe gales added into the mixture to spice things up a little. I am reminded of the ancient proverb “If in February there is no rain, ’tis neither good for hay nor grain.” I of all people, as a farmer’s daughter, should understand the importance of rain, so long as it rains at the right time of year.

The past week 105 kph winds battered our coast. The garden looked like a war-zone with scattered branches littering the lawn and I was staring out at the sodden landscape whilst cleaning up after breakfast when the rain commenced again; not a gentle drizzle but a torrential downpour that saw the terrace turn into a river before my eyes. At the bottom of the kitchen window where the two sides join in the middle is the most tiny gap and in through that gap water suddenly came streaming in as if someone had opened a tap. Water poured around the sink and was soon pooling all over the counter and down the front beside the dishwasher. Grabbing tea-towels I stuffed them as hard as I could against the tiny hole and then as quickly as it had started the rain ceased and the water stopped. Another job for Roddy to do, and another reminder about living in old houses. Why this had never happened before and why it should start now we had no idea, but there is never a sensible solution, it just happened and that’s life here in an old farmhouse! 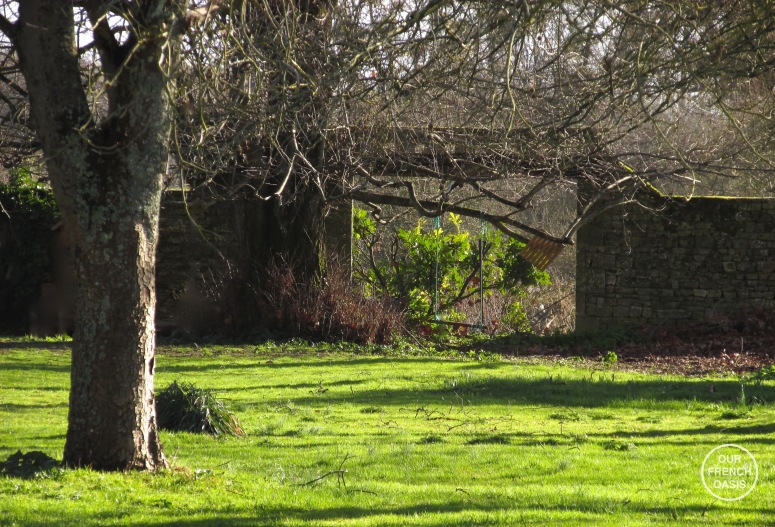 The truth about living in an old house built in 1790 is we live with it ‘day to day’. The windows and doors can be draughty, but I’d rather live with the draughts than lose the house’s character. Nothing is truly straight, walls slant this way and that; there are no perfect right angles, the roof slopes, the beams are bowed and cracked, but the very same things that can sometimes be irritating are also part of the charm. Our property hides a wealth of old features that have become so commonplace we don’t even notice them. Our barn for instance has this ladder with which to climb to the attic above; it’s easily as old as the house, but it’s sturdy and it works and we have no idea what the numbers signify. 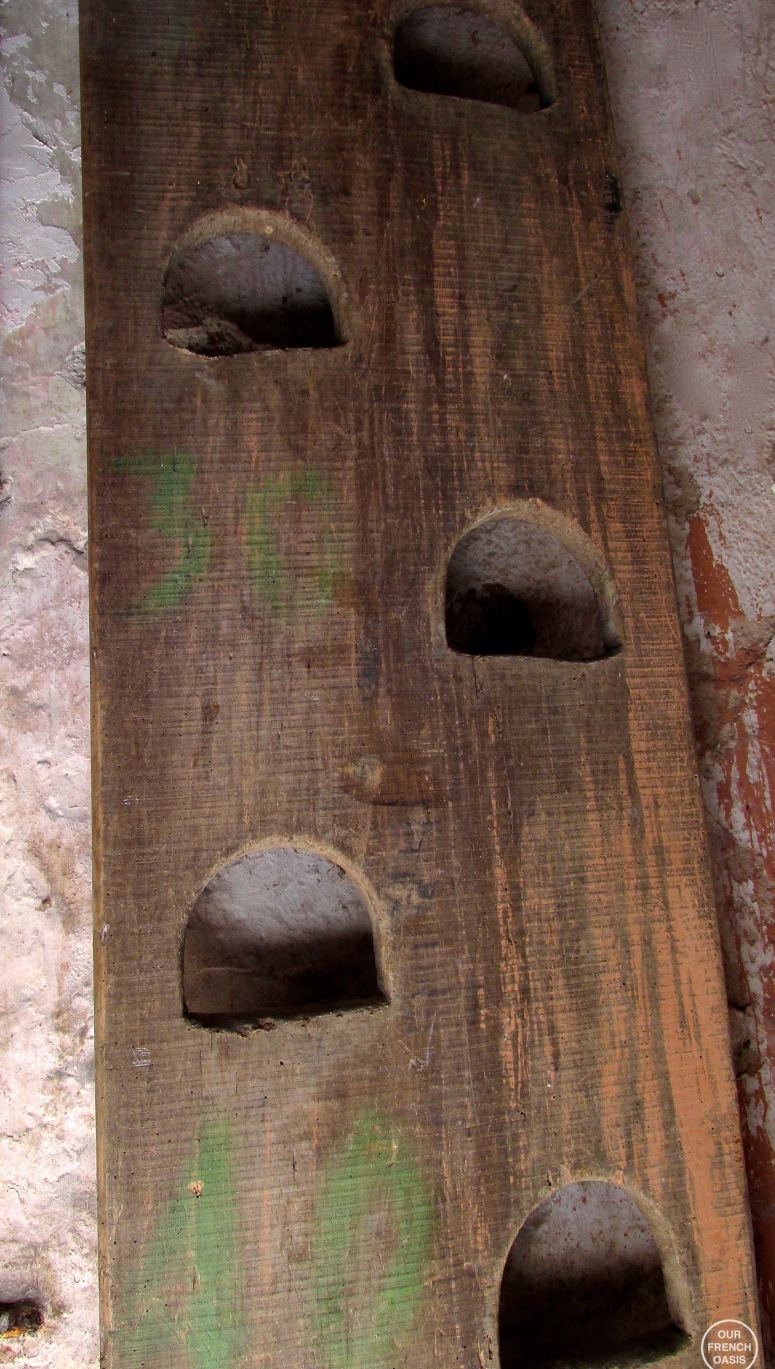 Frequently things need fixing. The older the house, the more opportunity for things to go wrong; but no matter the inconveniences, no matter the hardships, living in an ancient farmhouse is a privilege. Certainly the best balance is to combine charming period features with modern amenities, but we must restore sympathetically; we cannot seal up every hole and crack for the house must be able to breath. We have to treat it as a living creature, as it has stood for centuries and will no doubt still be standing long after our lifetime; in effect it is an honor to live here. The other day I passed this centuries-old farm which is for sale, complete with barns, lots of land and amazing views. I would arrange to go and have a look but I would hate to waste the time of what I am sure are elderly owners, so we will have to be content with a little day dreaming from the outside. 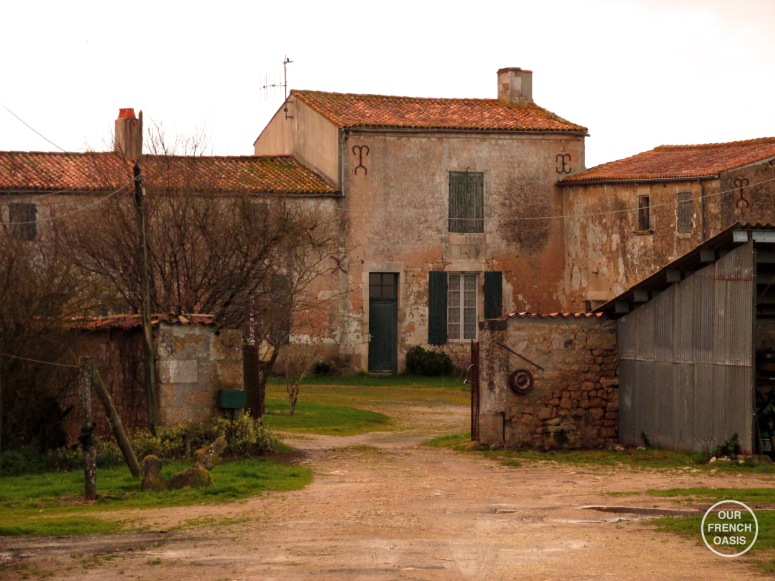 I wish I could move this old stone trough. It stands in the corner of the grange attached to our house which we call the ‘boot-room’. Unused and quite unnoticed by all, it even has drainage; perhaps this is where previous inhabitants used to wash in times gone by? Or is it something as mundane as a horse trough? 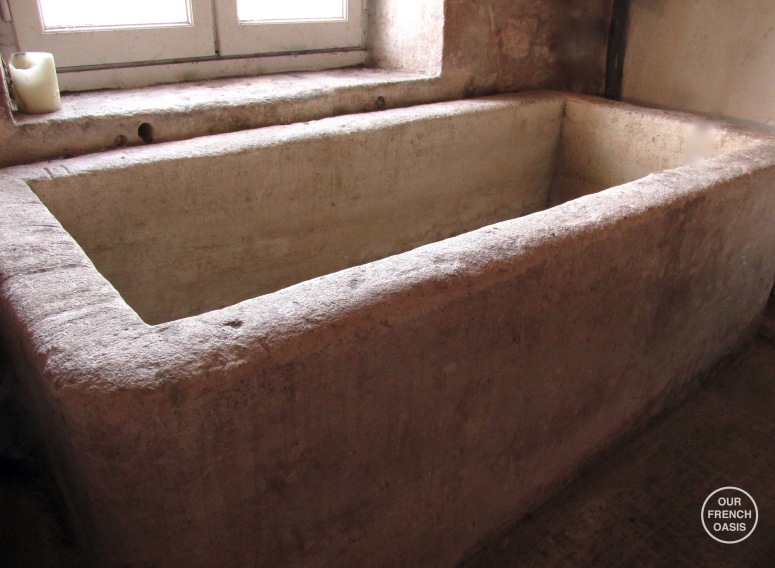 Living in an old house might change your life; it will certainly change your perspective. 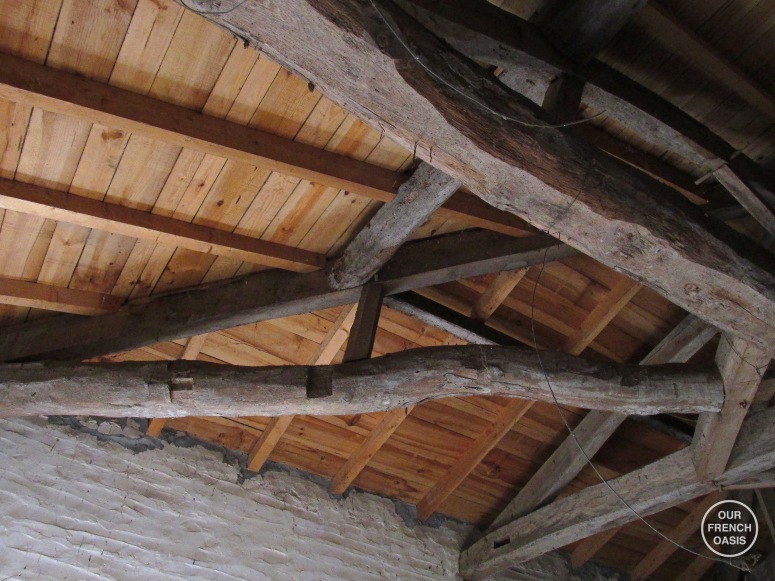 A major preoccupation of house-owners in France is the heating. In virtually every old home you go into the fireplace will be a feature. It can be an open-fire with logs crackling in the hearth, flickering flames licking at the grate and the mellow fragrance of burning wood filling the air, or it can be a wood-burner, safer and easier to keep alight throughout the day. Either way there is nothing better nor more inviting when you’re coming back from a walk than seeing the smoke gently coming out of the chimney. I can’t imagine a property without a fire; they can be messy and dusty, and it’s hard to regulate the temperature as we know all to well, alternating between wearing thick jumpers to wandering around in a t-shirt – but nothing captures rural living better than a fire.

Come to think of it, winter hasn’t been that bad at all, I don’t mean the weather I mean winter in general, and I am sure that’s all down to the new wood-burner we installed in the kitchen last October for nothing beats a cosy country kitchen. It’s true I’m slightly bored of washing dirty dog-towels, the boot-room is constantly littered with wet coats, wet umbrellas, wellie-boots and mud. But as is always the way in the Charente Maritime, just when I can’t stand the rain any longer, the sun comes out, and even in February it’s a powerful sun, strong enough to actually create some warmth. It beckons us outside and away from the fire. Whilst doing some research I learnt that in Olde English the name for February was Solmonath, which literally means “mud month” – I think I shall be calling it this from now on! 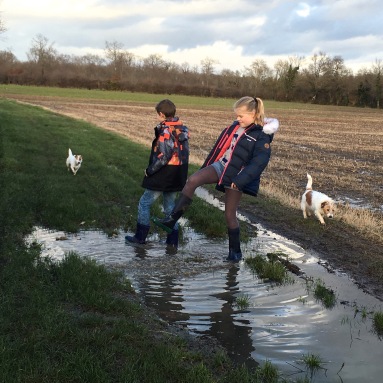 It is indeed a truly fabulous life, but nothing is ever simple. A few days ago, right after I published the post about Evie, she killed one of our chickens; the victim was our dearest little silkie, Constance. Why Evie would suddenly kill a chicken we have no idea; she has grown up around them since she was two months old, and sure, she chases them for fun, but there has never been any intent to harm, or none that we could see; it was always just a game. I actually walked around feeling rather numb for a couple of days, and the garden and our dog walks temporarily lost their appeal. I know my ancestors would tell me I’m becoming “soft” – maybe I am. Still Mother Nature tried really hard to cheer us up. One of our plum trees is already in blossom, the daffodils are fabulous, and the aubretia and camellias are starting to work their charm. We’ll work out what to do, I know. But our immediate questions of that day already seem over-dramatic; do we sell the chickens, do we fence them in, do we re-home Evie? Most likely we’ll do nothing for now but keep a vigilant eye on her whoever she is outside, hoping it was a one-off, however unlikely that may seem. We’ll keep training her and right now put it down to one of life’s cruel moments. 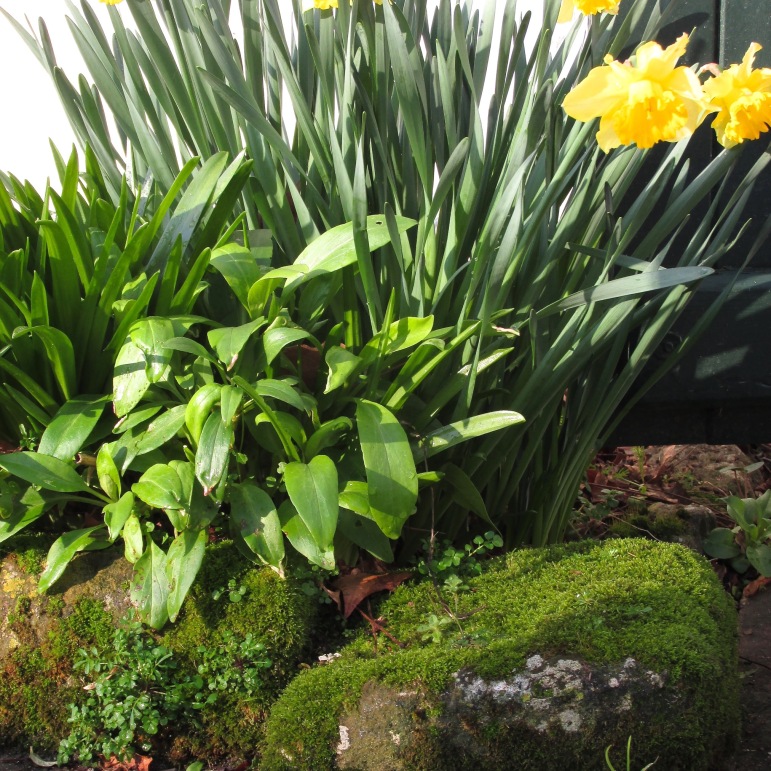 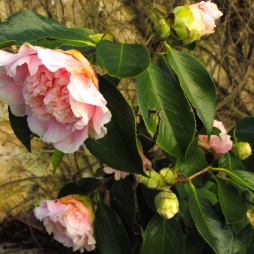 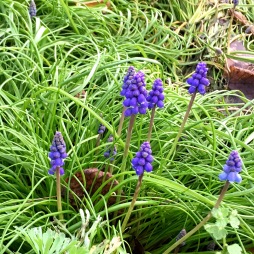 But for now, the rain has stopped, it’s a perfect sunny French day, and the children’s winter holidays are looming; just one more day to go and then two weeks with them at home – I can’t wait. We have tennis tournaments for the girls in La Rochelle, and then we’re off to the snow and mountains for a few days; there is so much to be thankful for and I certainly am extremely grateful for all of it.