A couple of weeks ago I talked about future blogposts and how I wanted to feature people who had renovated old French houses. I thought we would kick off with a bang and cover the renovation of an ancient château as a little entrée. How ancient? Well, the earliest reference to this fortified building is some 300 years before Columbus set sail with his little fleet for the western Atlantic, and when the first stones were laid for the château’s walls, William the Conqueror (he who smote Harold with an arrow at the 1066 battle of Hastings) had only just died. It all began in that period of history when people still kept animals in the downstairs room of their houses, lived in fear of the devil at night, and all along the coastline of Europe, men stowed their swords and pikes ready to defy intrusions from the sea. It’s all a long, long time ago.

I have been fortunate enough to meet and spend some time with André Rousselot, who is the current owner of the Château Fort de St Jean d’Angle. The son of a businessman from La Rochelle, André exudes excitement, passion and confidence. A man as at home behind the boardroom table as he is at the helm of a cement-mixer, André typifies the endurance of the sort of person needed to see through and complete a project of some 22 years standing. Although still unfinished, the château is very much alive and well now; a far cry from when his father bought it in 1994. Then, it was a ruin; a mound with a clump of trees and stone walls, surrounded by a stagnant moat. Today it has been almost totally restored and transforms during summer into a magical re-enactment of medieval times, complete with sentries on its battlements, a moat which one crosses at your own peril, battles and jousts on summer days between sweating men in full armor on oxen-sized horses, and a swathe of authentic games and interests for people to enjoy. It is also true to its owners’ vision though, and gives short thrift to the glamour of any Disney makeover. Real artisans make pots, beat out sword blades on red hot forges and stitch saddles and boots as you watch; the only fast-food in sight is a suckling pig on a spit attended to by a pitchfork-bearing man in leather jerkin blackened by smoke. 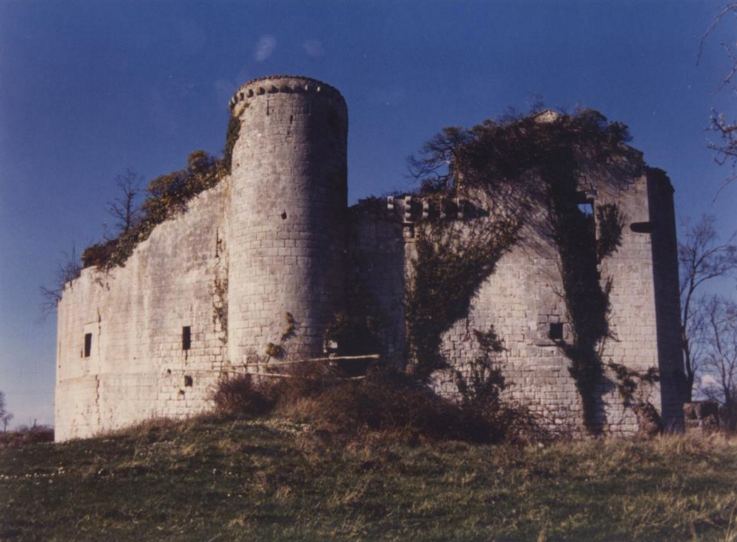 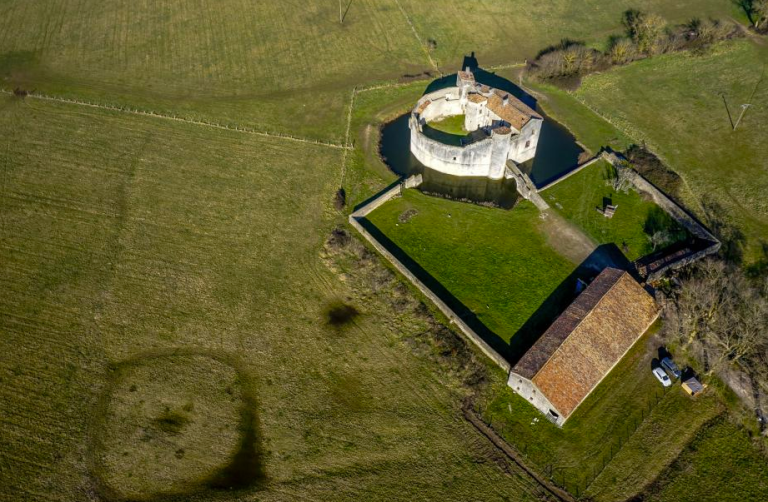 Last time Roddy and I visited André it was a cold and wet winter’s day, but there was a huge welcoming log-fire burning in the Great Room, and over a cup of tea he brought us up to date with his plans, and explained why the building was now such an important part of his family’s life. 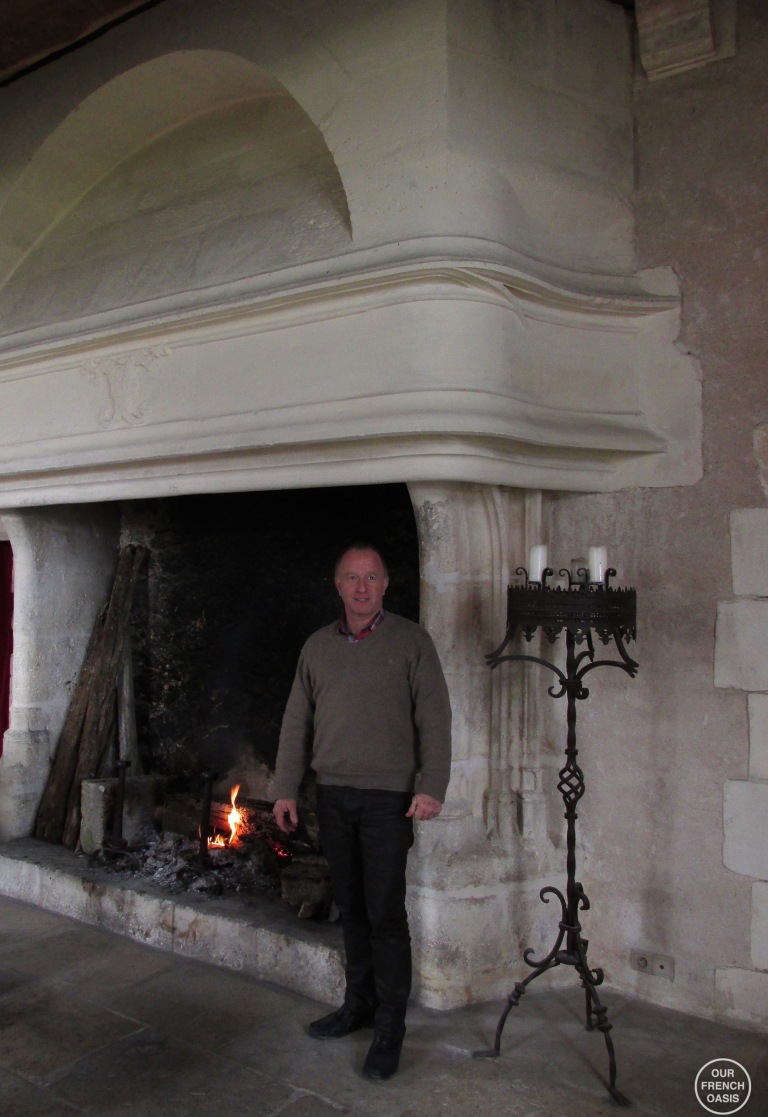 First, though, the boring bit – some history. This is important because we’re talking about a château fort as opposed to a château, and as a result I need to explain the difference between the two. A château, is a large country house, or a manor house, or sometimes even a castle – with or without fortifications. A château fort on the other hand, is always a castle with fortifications!

It isn’t until you are actually in the château, looking out across the marais from its windows that one begins to truly understand the importance and significance of the building. Being so close to the original coastline, Rochefort and its islands and marshlands had their fair share of invaders from the ocean – whether they were Vikings, Berber pirates, Anglo-Saxons, Danes or even Celts; by the 12th century all three of the area’s great inland bays were being transformed into areas of marshland, where developing agriculture, aquaculture and the booming salt trade provided rich pickings during occasional incursions by thieves from the sea. As the bays changed from shallow coastal waters into the great marais which are still used today, the ridge-tops provided a sound defensive position for the developing marshes. Perfectly placed on the skyline just above the marais, a fortified castle could act as both a deterrent and as a refuge for those working on the water and in the fields about it. This is how and why the château fort was born – to defend some 6000 acres of considerably wealthy revenue. André took us up to the battlements to demonstrate the significance of the position. I mentioned to André that the English had probably paced the same ramparts. “Absolutely,” he replied laughing. “The same family may have owned the château all that time, but sometimes they were under French rule, and sometimes under English.” 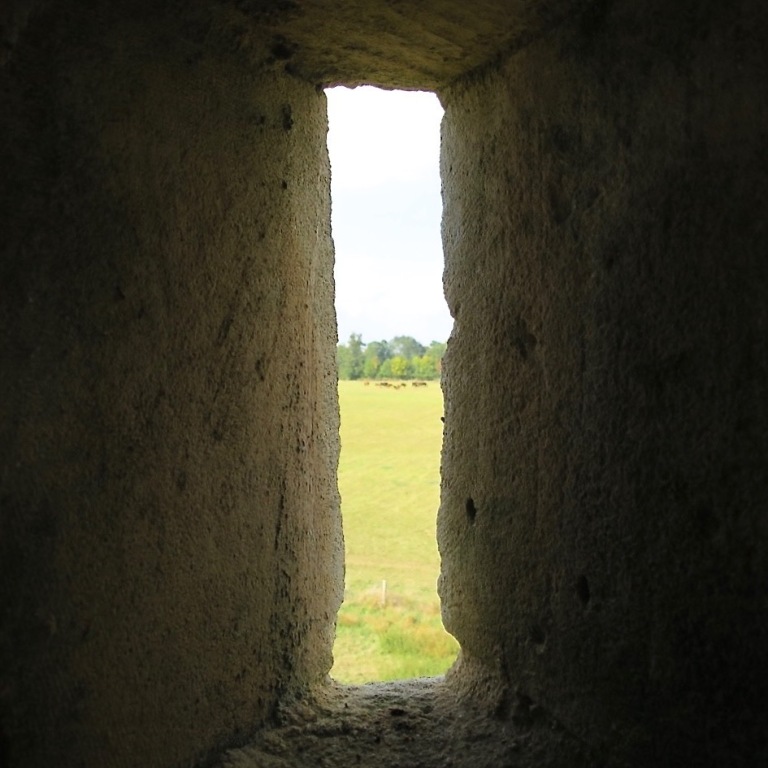 The château fort is believed to have been originally built around 1180 by Guillaume de Lusignan, who was from one of the most powerful families in the region. It remained in the possession of different parts of that family through most of the succeeding centuries. However, by the beginning of the 20th century, it was in ruins, and the land was used as common grazing ground by villagers. Two world wars later, we come to 1994 and André’s father, Alain; driving through the area regularly on business, he became enchanted with the ruins and the thought of restoring the battered old building, whose walls were literally held up by the vegetation that had grown up amongst them. In December of that year, he finally bought it.

But who would take on such a project and why? It had taken Alain, André and other members of the family some 22 years before they were able to officially open the château to visitors. It all began with six initial years of work in January 1995, in collaboration with the Monuments of France. Helped in small part by some grants, most of the restoration has been funded by Alain’s own money and as a result there were periods when little got done, when cash was tight. The château lived for many years enveloped in a nest of scaffolding as the walls were almost totally rebuilt, to rectify massive settlement fissures that had developed over the centuries. Much of this work was done by the highly skilled artisans from the Monuments’ own taskforce, and such was the quality of the work that in 2003, the chateau received two prestigious awards; the Grand Prix of the French houses and the Prix Europa Rostra. Looking around the great room, I could see the new huge beams above my head, and the fresh sandstone pieces in the fireplace and walls. Succeeding bouts of restoration have included new roofs on the Great Hall and its adjacent buildings, excavations of the cellars and dungeons, new floors throughout all the buildings, and a crash course for many in the art of cutting stone; shaping some of it into intricate pieces and shapes, and using traditional and tested techniques for specific architectural contexts, such as mullions for windows, interior archways and exterior staircases. 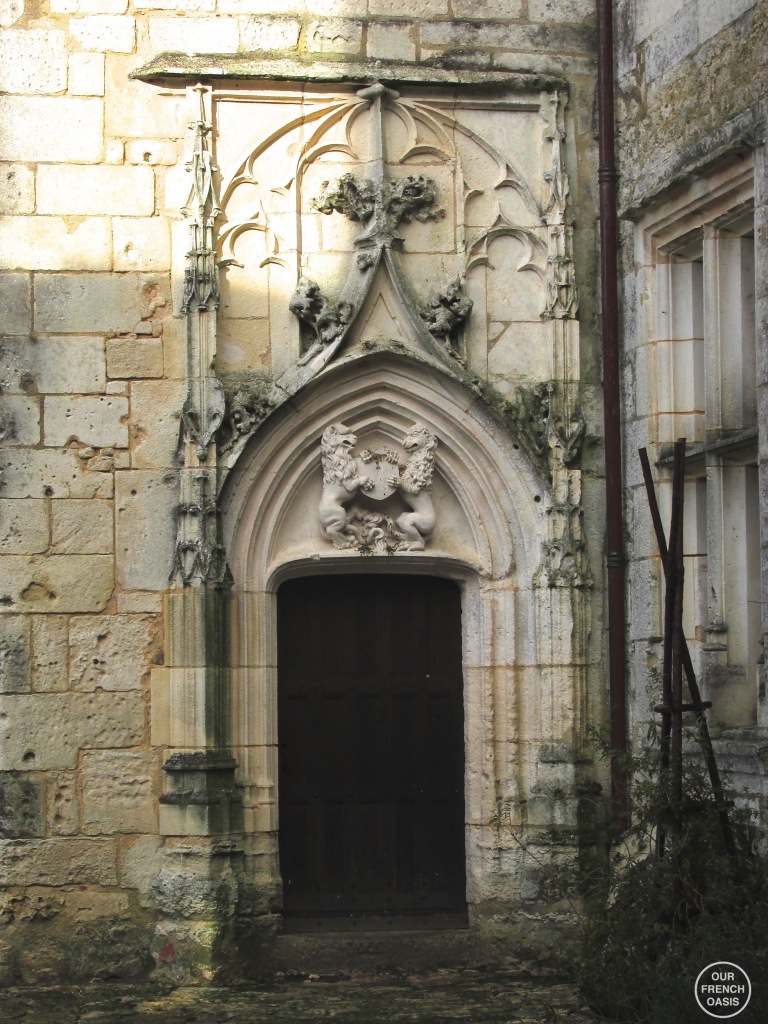 André was keen to show us the progress they had made in the upstairs rooms and we followed him through an interior doorway to a screened staircase. Along the way we passed a tableau of mannikins in full costume enacting a typical kitchen scene, and gingerly stepped over a recumbent soldier asleep on some hay in a guardhouse. As we went up the curved spiral stone stairs, he kept pointing out the features that were original and those that has been restored. Up on the second floor above the Great Hall, newly restored floorboards have replaced the hundreds of wood-worm riddled planks. Old windows have been unblocked, and all of the château’s fenestration has received new mullions and new glass, a project all to itself.

Ancient fireplaces have been carefully restored, half-finished electrical wiring and copper plumbing artifacts weaved here and there, testament to the ongoing work and hinting at the plans afoot for the future. André paced from wall to wall, telling us about imaginary bathrooms and spaces for beds, as he outlined his plans for six en-suite bedrooms and weekends for enterprising visitors. He had visions of grand banquets and ideas came pouring forth in conversation; I was amazed at the energy of someone who had spent 20 years looking at what must have appeared at some stages to be a complete mad loss. 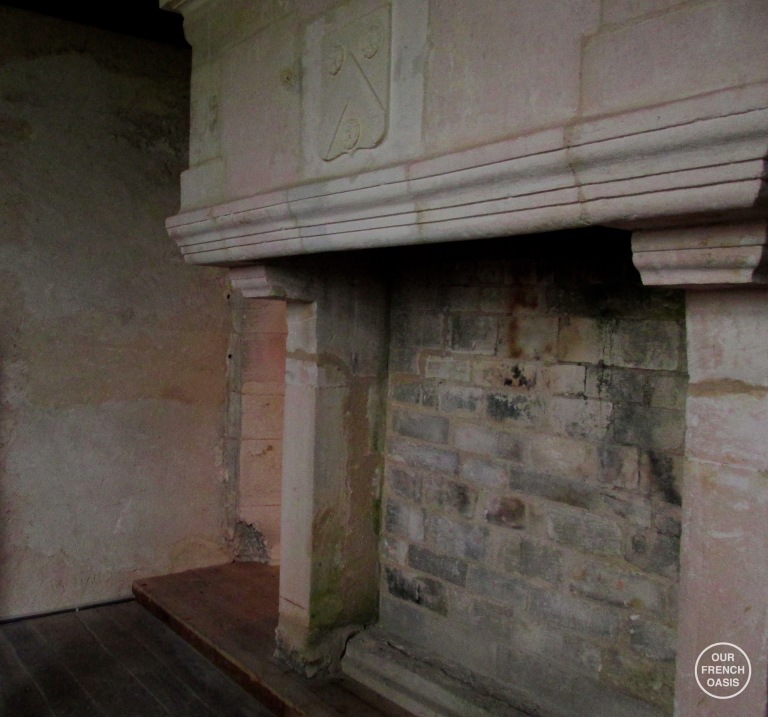 It was this final understanding of André and his family’s commitment that finally got to me. It is one thing to pass by the colourful medieval pageant that the château embodies on a summer’s day, but it is quite different to the reality of listening to someone who explains that all of the previous work is but a foreword to a much greater plan, and that the plans also include building a second fort on the site where an 8th century wooden structure once stood, transforming 20 acres of surrounding land into the original ordered and regimented potagers, orchards, stables, outhouses and other buildings.

However, as with any renovation, budget is always a concern and given the sheer size of this project I imagined it must be a constant companion to André, and so I asked the inevitable question.

“How much has it all cost over the years?”

“Who knows, who is counting? We do not. If we did we would never finish; but it must eventually pay for itself,” explained André with that typical French shrug; but I definitely got the feeling that behind the casual reply he does indeed know exactly how much has been spent and how much more is needed.

One story more than most embodies the struggle André’s family has had to endure during this amazing restoration is the tale of the Tour de Clio. One summer’s day, a decade in the past, he and his father received a phone call from the foreman of the workforce.

“Come quickly,” the terrified man said, “the tower is going to fall down, it is swaying”

In a state of panic they asked what needed to be done.

“We need money, I can save the tower with money,” said the foreman. It needed some urgency, since no one could stay on the scaffolding, but a huge 20 metre baulk of timber was needed to shore up the cracked castle wall while they repaired it. A beam this large would cost a fortune, but there was no spare cash available for it. André and his father desperately searched for a solution all morning and then Alain rang his wife, and informed her that the money they had put aside for a new Clio (at the time the newest and most sort after small car built by Renault) was going to have to be used instead for a giant wooden prop.

“You mean I cannot have the car?” asked his wife incredulously.

“No, I am sorry,” said Alain, sadly, “the château is more important.”

And so the Tour de Clio, the tower at the back of the château, was born and it has been called that to this day.

You can find out more about the Château from their website here, http://chateau-stjeandangle.fr and if you are in the Charente Maritime do take the time for a visit. It is open spring, summer and autumn and you will not be disappointed.

Lou Messugo All About France

44 thoughts on “RENOVATING A CHÂTEAU”

Love this time of year, when the blossom is out and spring is in the air
Today is all about this incredible blue sky. The bluest of blue and a very warm 20C to match it😎
Filling window boxes with tulips, dreaming of spring and enjoying the warmth of the fire in the potting shed! Seems like a pretty good way to idle away an hour on a Sunday afternoon😂
Floods receding and blue skies returning. Have a happy weekend 💗
Share the love 💕
Rainy day