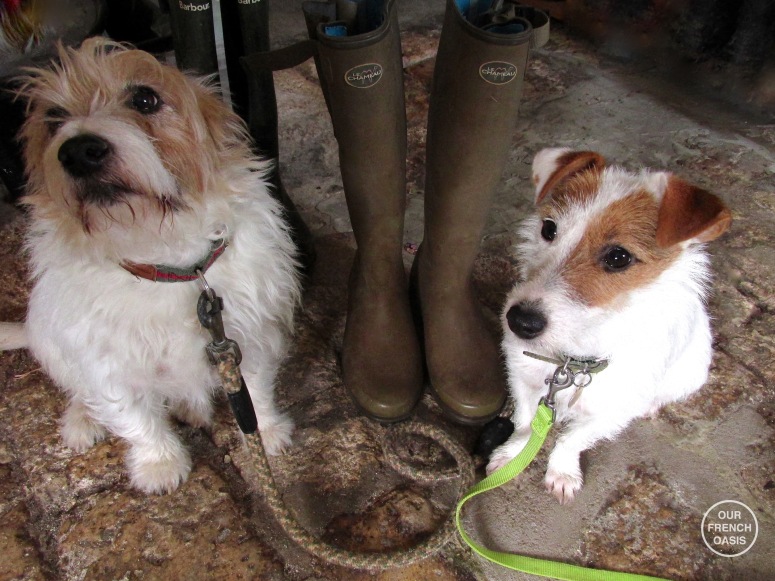 Sometimes, when it’s bucketing down with rain or just horribly cold and damp, it would be much nicer to stay inside; it would be so easy to batten down the hatches and work in the warmth of the kitchen, never straying too far from the wood-burning stove. But that is not an option when you have dogs. I only have to touch a lead hanging from the door and Bentley and Evie are at my feet, looking at me with that expectancy that says they just know they are going for a walk; by the time we’re in the boot room and I’m reaching for my wellies, there’s a keen sound of excitement at floor level; they don’t care if it’s wet or cold, or howling a gale; they just want to get out there! Our 200 year-old flagstones sigh at the scratching of paws and the wind-banging slam of the door as we go out and brave the elements.

I have walked with a certain spring in my step the past couple of days as the dogs and I leapfrogged puddles and dodged showers. I am extremely grateful for the response to my questions about blogging in my last post and I was naturally happy to hear that you like things as they are. Thank you all so much. As a result I have maybe stopped a little more frequently with my camera, spurred on to share all around me, and I’ve been re-arranging words to better describe what I see and hear. This deep in the country we don’t have any opportunity to have an ‘extravagant’ lifestyle, instead we take extreme pleasure in the most simple things; whether that’s our family life, the animals, the scenery, the fresh produce or just being grateful that we do not sit in traffic for a fifth or more of our waking day. Yes, we’re lucky, and we know it, and we appreciate it; and yes, we know how fortunate we are to live in the online age, where small luxuries can be bought with the click of a mouse too. It’s a magical mixture.

I never tire of the views on our routine dog-walk straight from the house. It takes me just one hundred paces to move from the 21st century and a computer-screen to this old landscape, where an ancient fortress surveys a working landscape it once proudly guarded from the ravages of Barbary pirates and the plundering attacks of British yeomen; where centuries of tears, smiles, births and deaths lie buried deep in the cloying inevitable embrace of the marsh that is the Marais de Brouage.

Looking across at little hamlets, that have stood for centuries, I stand on a path that pilgrims have trod for 14 centuries, and still do today, as they go southwards to the great cathedral of Santiago de Compostela in north-west Spain.

We go past dormant vines, not really enough to be called a vineyard, in fact there are just a hundred or so plants for someone’s private use – some of these ‘house’ wines are very unsubtle, some are little treasures. 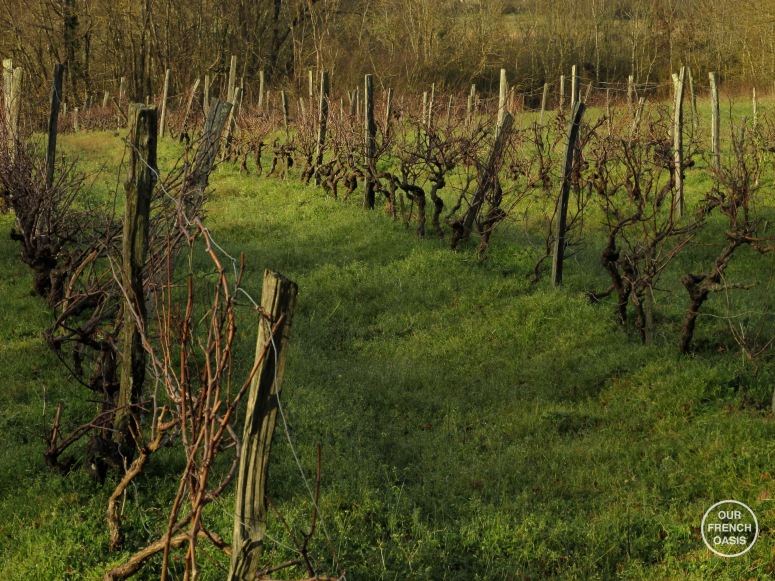 Bentley is always content to wait and take a breather while I take photos, he being of a slightly senior age, but Evie at only seven months old cannot sit still; she’s off, on the scent of a rabbit or some purely imaginary smell. Nose to the ground, she follows a translucent path of scent, weaving right and left, her nose twitching like the billion-pixel imagery tool it truly is. Bentley watches with knowing amusement as she scampers around wasting so much energy. However, our dog-training efforts are finally starting to pay off and she now comes back when called (most of the time!). She races back to the track ahead from where she’s been lost in some adventure, far out in the field or deep in a hedgerow, and darts around in all directions before shooting off ahead again, covering ten times as much ground as the rest of us. 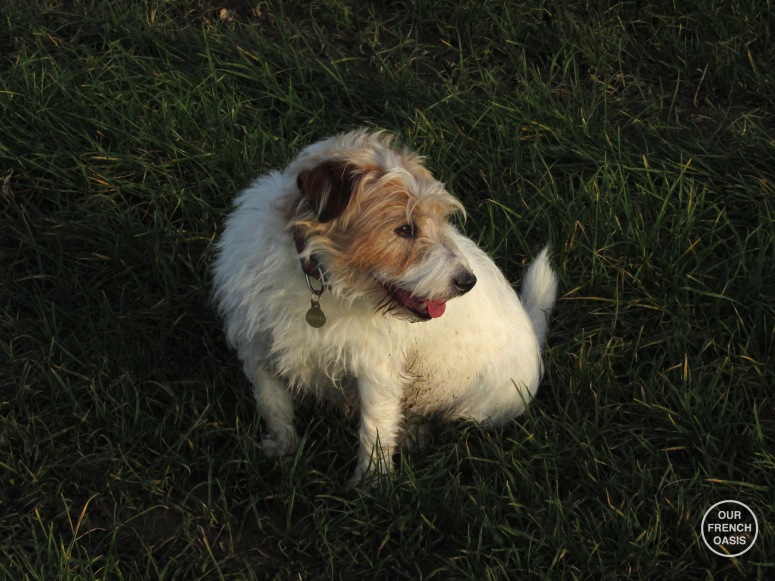 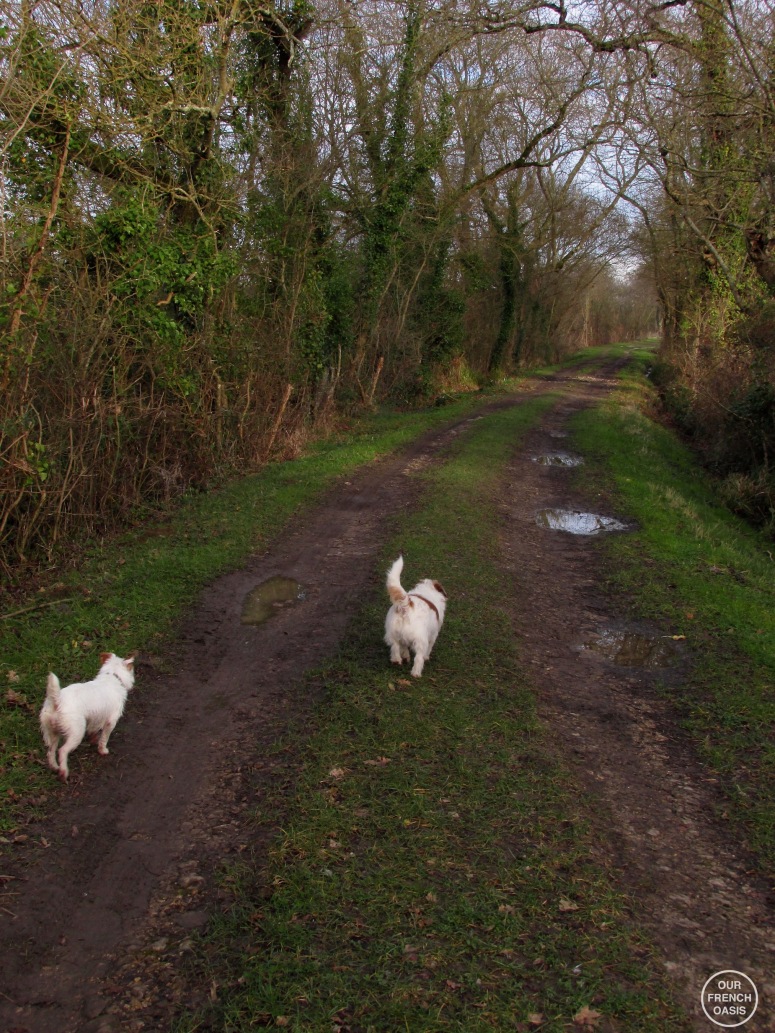 The weather has thrown everything possible at us this week, we have had freezing temperatures, gale force winds, torrential rain and beautiful sunshine. One morning we woke up to a rare frost and a thin sheet of ice on the puddles and the pool. Gigi and Hetty had a fine five minutes before school playing in our temporarily frozen landscape.

A couple of days ago I arranged to meet someone I wanted to talk to about three houses she has renovated; this is for a future blogpost next month. The weather could scarcely have been worse. I set off straight after the school-run, the thermometer only just above freezing and the rain battering against the windscreen, wipers on full speed. Heading north-east and away from my usual stomping ground I started to go inland through little villages I didn’t know. On the way home I kept making deviations and stopping to take photos; my return journey taking a good hour longer than it should have done. I passed several small chateaux, the type that look ‘lived in’ by families rather than just being museums open to the public, and I made a mental note of many places I had to return to when I had more time and the school pick-up was not approaching rather too quickly. 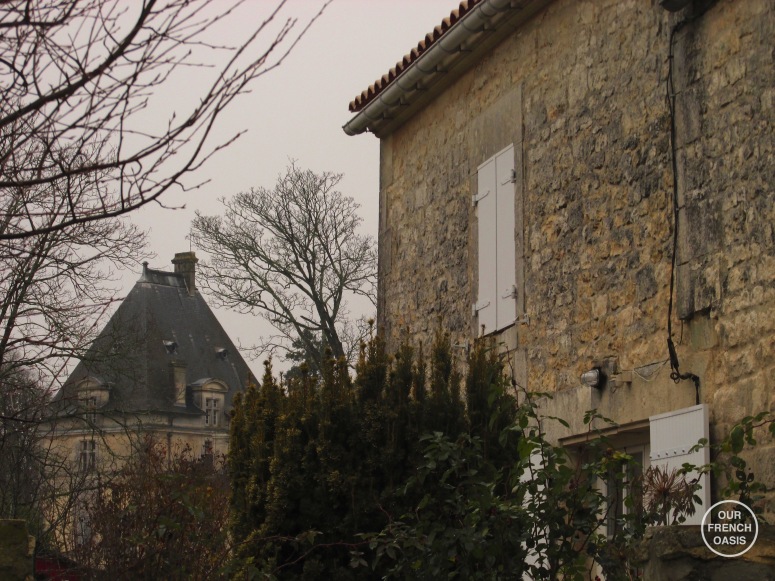 I stopped briefly in St Savinien, a small Gallo-Roman town, on the banks of the Charente; the rain had eased finally, which is just as well as the umbrella I had grabbed in my haste to leave the house on time was in fact broken, a fact I discovered with sigh of resignation as I arrived at the house I was visiting – alas the girls had used it once too often for some Alice in Wonderland adventure in the garden.

I stood staring at near deserted streets I had once seen in a very different season, for we had been here before last summer; then, flowers adorned every window box, boats with tourists silently glided down the river and locals and tourists alike strolled along the ancient streets. Now it was almost unrecognizable but just as photogenic, with the streets and houses slick with watery reflections.

A little closer to home and after another quick detour I came across this wonderful farmhouse, with a large Vendu sign, clearly marking that it has recently been sold. I thought what a wonderful home it would make, tucked away off the beaten track but not totally isolated, located in a tiny village with a small church and a clutch of similar houses.

and I also realised that I don’t need perfect sunny days all the time to take photos, as sometimes the light can be magical on grey days, when rain magnifies colours even if it’s cold and bleak.

So whatever the weather where you are today, I hope you have a wonderful Sunday.

42 thoughts on “Making the Most of the Rain”