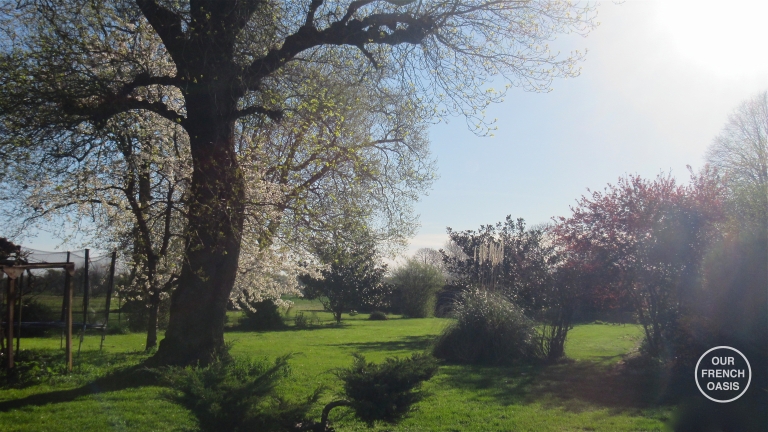 It’s amazing how so much can happen in four days, I mean I know it is only four days since Sunday, that’s a fact, but it seems like four weeks. The French air-traffic controllers went back to work, and so Izzi flew back to University on Sunday. A hot and sunny day and the usually sleepy little airport at La Rochelle was a heaving mass of frustrated travellers and fractious children after so many cancellations.  The arrivals and departures building is so sweet and so small you can’t even check in online as it doesn’t have the facilities, and I drove off leaving Izzi in a 65-minute queue for security.  She texted me from the plane whilst they were sitting on the tarmac waiting to depart – 15 passengers had somehow gone missing, security had been completely swamped as three flights were leaving within ten minutes of each other, and she was next to a toddler and behind a crying baby and then someone threw a book at her head – all of this and she still hadn’t taken off!  It was going to be a long 75 minute flight across the Channel!

Roddy is still hobbling with his infected foot and ‘septic shock’, and is on his second course of antibiotics.  I’m therefore still flying solo so to speak, and there are far too many jobs around the garden still remaining half-finished.  However, the days are drawing out and it isn’t getting dark until gone 9pm so after I have collected the children from school and everyone has been fed and watered there is still plenty of time for an evening dog walk and some playing in the garden.

More dramas on Tuesday evening when Gigi, our youngest, tripped over whilst playing in our neighbour’s garden and took the brunt of the fall on her wrist.  Amidst floods of tears, I took her to our delightful local doctor who was happy to see her despite the fact it was definitely the apéritif hour!  He suspected it might be a hairline fracture of her wrist and sent us to the Urgences in Royan; this was a little further than Rochefort but, in his words, much more efficient and with much less waiting time.  I am really happy to say it wasn’t fractured but just sprained although she will be wearing a support bandage for the next couple of weeks.  However yesterday she was back happily playing in the neighbour’s garden once again; the young bounce back so quickly at that age – it is making Roddy green with envy.  When Gigi fell over, I had been in the middle of giving Bentley a much needed spring hair-cut as he was looking extremely shaggy!  Poor chap – taking care of Gigi meant he got left unfinished – one side trimmed, the other still long and hairy – until the next morning.  He looked like two different dogs, depending on which side you viewed him from! 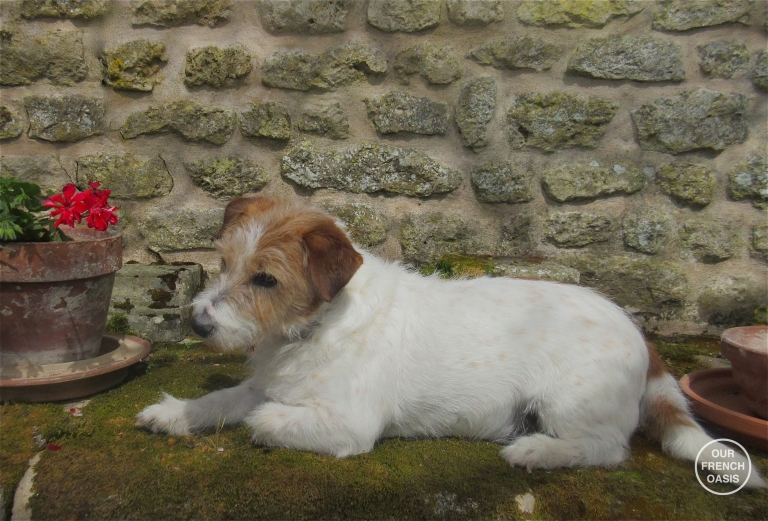 The garden seems to have literally exploded into life;  gone are the bare trees and in turn we have a jungle of semi-awakening buds and unfurling leaves, which literally seem to have burst open overnight.  This was no gentle transformation!  Of course the weather has played a major part in this, and we went from a pleasant 20C last week to a very hot 30C this week; in fact, we were actually having to water both our long-term plants in pots and also everything else we have recently planted. Whoever heard of having to water plants in April!  The chickens have taken to foraging under the trees and old stone walls and avoiding the open shadeless lawn. 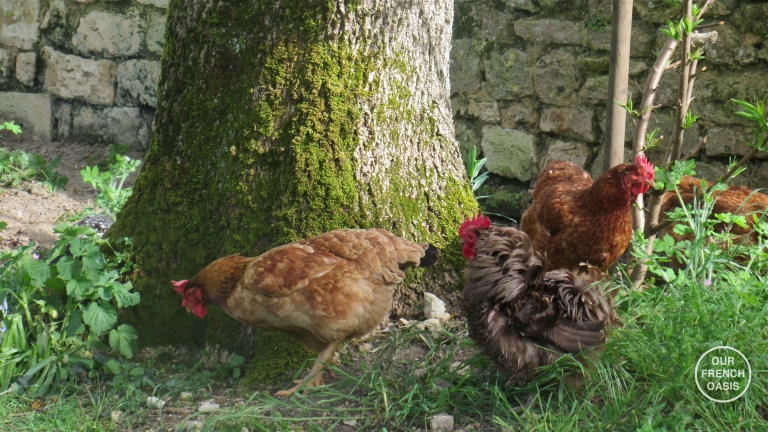 The plum blossom and peach blossom have long since given way to small fruits, but the cherry is still magnificent –  a stunning backdrop of white amongst all the greenery surrounding it.  The horse-chestnut is in full leaf and its flowers are poised to open any day.  The Virginia creeper which climbs all the old stone walls has suddenly come to life, little red buds and delicate leaves appearing all over the place amidst the tangled web of the vine. 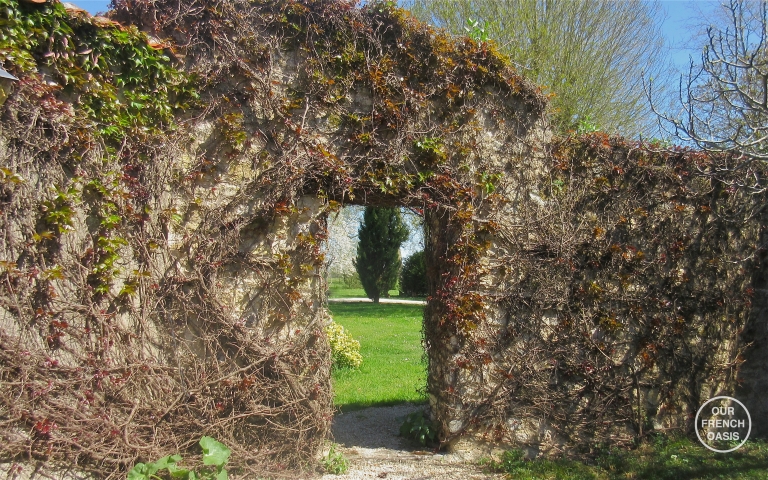 The wisteria spreading along the front of the house is stunning, and gently scenting the bedrooms above through the open windows with a sea of bluebells underneath. 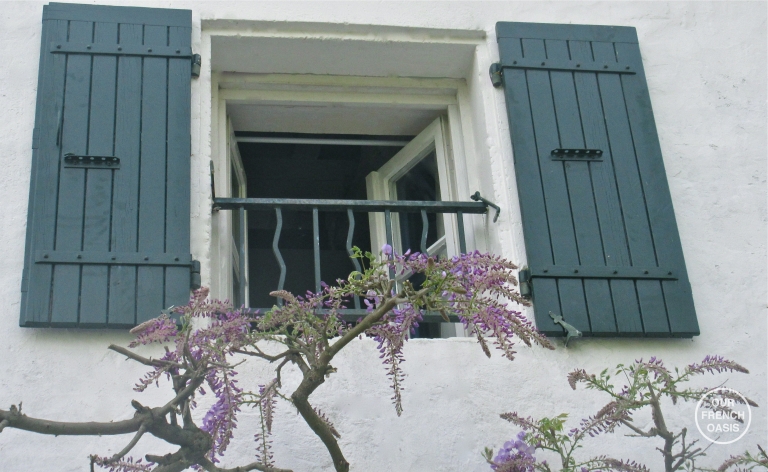 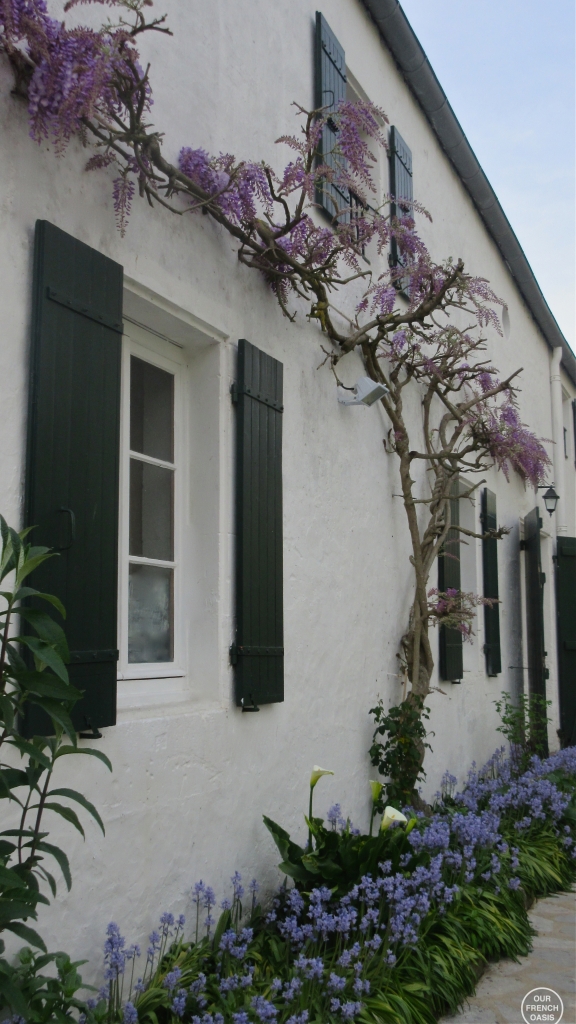 Rhubarb has shot up out of nowhere in one corner of our newly formed vegetable garden.  We didn’t even know it was there. The girls and I have sowed and hoed and weeded!  We have cut and trimmed hazel sticks for the runner beans, and cut off the tops and made them into pea-sticks to support the peas as they start to grow.  We have so far also planted potatoes, carrots and spinach. The redcurrant and blackcurrant are all flowering, I think we have five of each; the irises are a vivid blue against a backdrop of green; and the tiny wild strawberries which grow in abundance under one of the south facing walls are in flower. 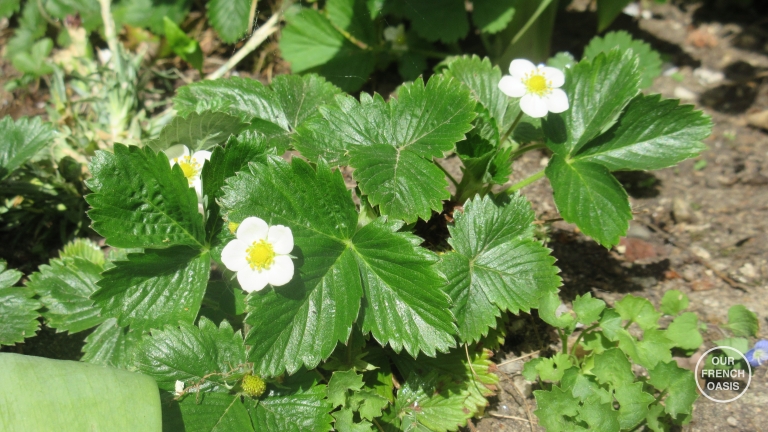 Our huge fig tree in the small courtyard to the side of the house has finally come into leaf and I am extremely relieved to see buds forming on the grapevines.  Relieved as I have never pruned vines before, we have a row of old established vines which we incorporated into the vegetable garden which bear really sweet juicy red grapes and a huge old vine against the wall in the courtyard.  They were all sorely lacking attention when we bought the house and after much advice from friends I tackled them just before Christmas and I was brutal!  Every day I discover something new, it’s like entering a toy shop for the first time – I can’t wait to see what our garden has to offer in our first full year here. 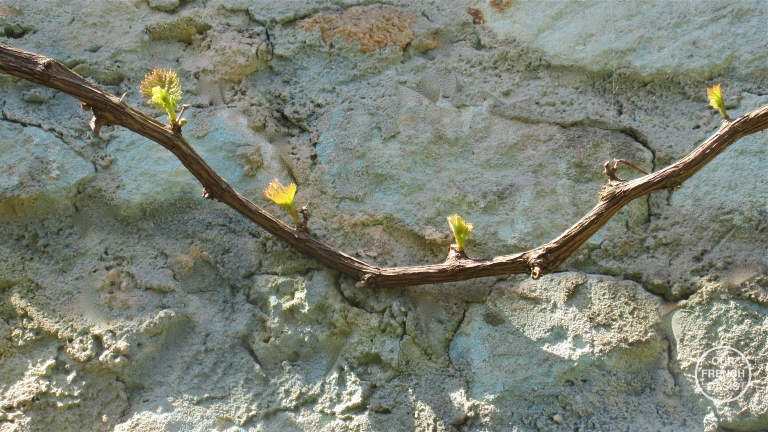 Finally, Rosie, one of our sweet Pekim bantams has gone broody which has caused so much excitement in the household.  It’s the first time we have had a broody hen.  We moved her at dusk to the old small coop which we no longer use, a joint effort between Millie and I as we carefully carried her and re-located the eggs.  However, nothing is that simple.  Naturally, she was sitting on several of the larger eggs of the big girls (as we call our standard farm hens) and only two bantam eggs.  So whilst Millie was at school the next day I waited until Rosie took a little time off her nest to switch a few more eggs.  I waited and waited, and about 11 o’clock she hopped outside for a walk.  Quickly I hurried down the garden with 6 bantam eggs from the past week and carefully put them in her nest,  removing the large eggs from the big girls.

Mission accomplished, or so I thought.  I waited a while to check she would go back into the coop and all would be well but when I checked, she wasn’t there!  She’d gone back to the big coop they all share and was quietly patiently waiting outside the nesting box whilst one of the big girls laid an egg!  Obviously I was going to have to pick her up and put her back on her nest, but I hate picking up hens and unfortunately a broody hen does not like being picked up – especially when she thinks she is being taken from her eggs.  Bravely I donned my gardening gloves and carried her back to the old coop and her bantam eggs. Two days later and she has remembered which coop to go back to, and is being a very dutiful hen.  Thank goodness she only has another 18 days or so to go! The excitement amongst the children is akin to the build up to Christmas. I hope to goodness that the eggs are actually fertilized and that Fritz has done his job.  I am not asking for a lot, just one little chick would be fine, I’ll keep you posted! 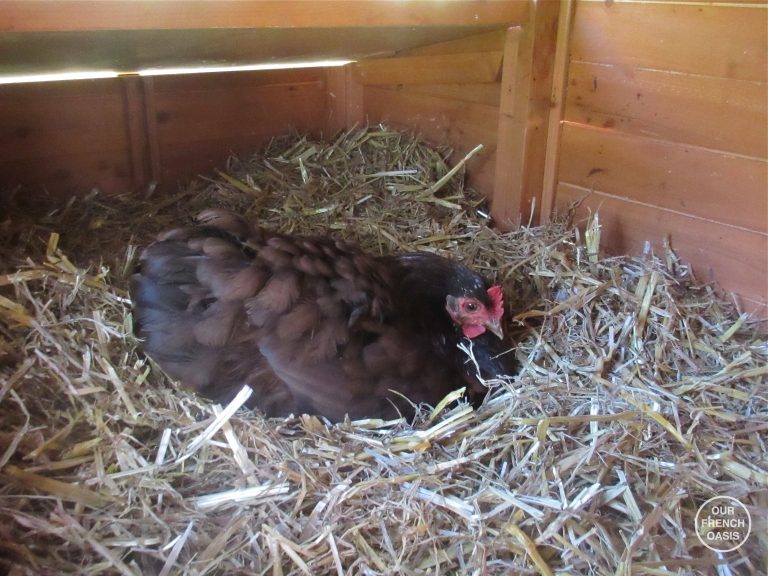 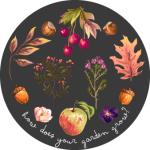 This is still my favourite little cottage ever.
Just love these steps leading up to those stunning gates and then a relatively simple cottage beyond.
Sunday brunch with all the family. The first time we’ve had all five children home at the same time for 2 years!
That amazing moment when you see your daughter for the first time in 19 months.
Really embracing these amazing October days. The nights are cold and the mornings even colder but once the sun gets up it’s incredible.
Spent all afternoon outside, such beautiful autumn weather.