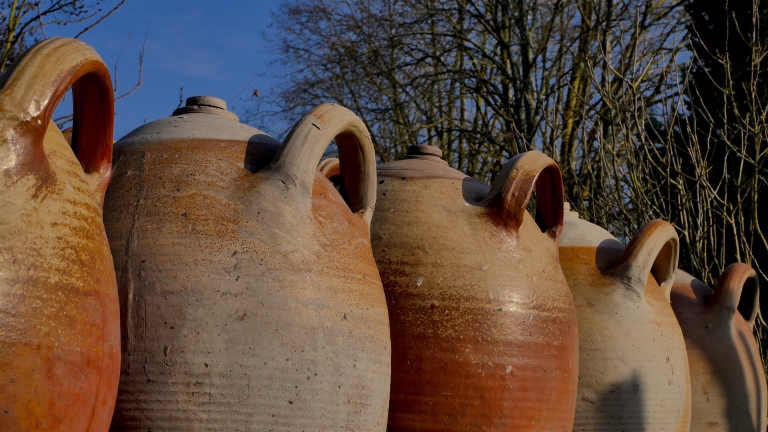 I have a deep love of anything vintage, antique and French. I’ll go through hell and high water to try and visit a brocante, or a vide grenier – even a house clearance sale – if I can get up early enough (that’s ‘using a flashlight to find the car’ early enough). And until recently, I’d always prided myself on my efforts, but then I met an accountant at a dinner with friends and as I was chatting about some rather special confit pots that I had just found he thought he would lean over the table and dampen my enthusiasm a little with some old-fashioned advice.

First he asked how much I had paid for my pots, and how much I was going to sell them for. This then led to some discussion about other items I’d bought, and their respective selling prices, too. Now, typically I sell things for no great profit, certainly nothing to get excited about; it’s just enough to cover my costs and buy a chicken for Sunday lunch, perhaps. As a result I feel quite proud of my little sideline that brings me so much pleasure. But then my accountant friend smiled and started to ask some further, more detailed questions – the kind of questions that only someone with a mind that works purely in figures would think of.

Had I taken into account the time it took me to travel to each brocante, the fuel costs and the wear and tear on the car?

How about all the hours I spent once actually there, walking for miles, taking hours, just to buy one or two items?

Had I thought about the time it then took me to photograph each item?

Each time I answered with a rather shell-shocked “NON!” 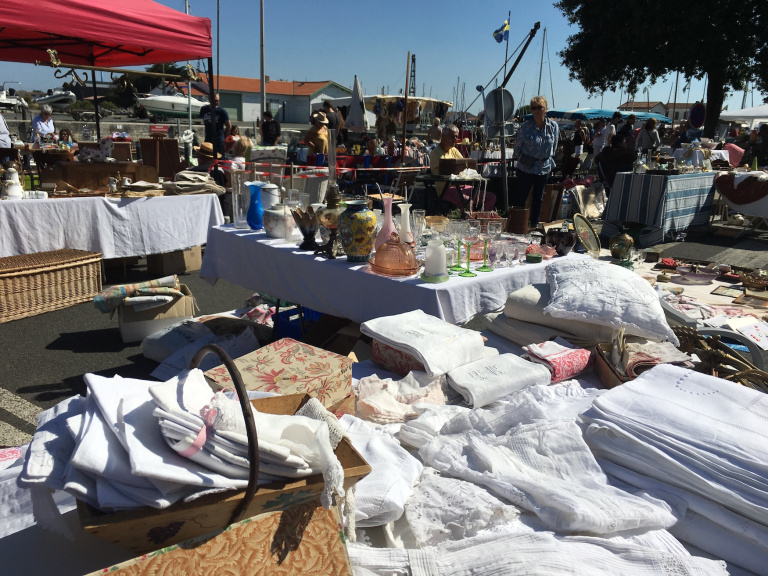 The inquisition continued; how long did it then take me to create a listing for each piece, and had I allowed for this time by the hour, and had I factored this into the price?

Once again I replied with a big fat “NON”.

And then came the piece de la resistance when he asked if I restored and repaired things. Triumphantly I said, “NON” again, but this time I was rather pleased because I thought I might have scored a ‘brownie point’., because I don’t spend hours repurposing and restoring, apron around my waist. ensconced in an antiquarian workshop – I rather tend to leave things as they are, and let the buyer do the work – simply because I do not have the knowledge half the time, and I am terrified to touch anything. However, my ‘brownie point’ was quickly cancelled the minute I decided to elaborate a little further, I merely mentioned that I sometimes clean things, when warm running water and a mild soap is often all that is needed, sometimes with a little bit more elbow grease and some good scrubbing and polishing if something is quite filthy, but never restoration.

Ahhh, this was my downfall; had I taken into account the cost of the water, the cleaning products and yet again the time, my time? “NON NON et NON”. And with that supper was ready and we moved from aperitifs to the table, laughing as we went at the crazy English;  the meal was delightfully delicious and all conversation about antiques was firmly put to one side. 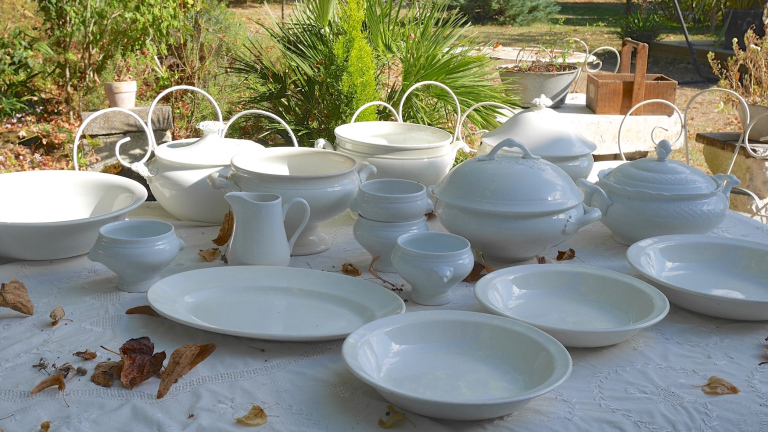 At the end of the evening, there was a customary kiss adieu on both cheeks and a gentle smile from my new-found accountant friend.

“I admire your passion for my country but you are quite mad,” were his parting words.

I know we will meet them again, I know there will be no hard feelings and I know we will be friends. It is just a different way of seeing things; his mind cannot fathom why I would spend so much time doing something for so little financial gain. But then he will never understand the thrill of a lost treasure calling out of the shadows of some dusty brocante shop miles from civilisation, nor will he probably ever have the satisfaction of passing that pleasure on to someone else. I know, however, that my house will always have beautiful things in it, and they will be things I will treasure for the stories that radiate about them.

I was reminded of my accountant friend’s words quite recently, when we found an old brass candlestick at a regular market brocante. Roddy went ahead of me by an hour in one car, and when I arrived with the other I had no idea where he was and started off alone down the stalls. At the end, on a table groaning with old brass, I found this simplest of candlesticks, and the moment I picked it up and help it in my hands I knew it was special, it stood out amongst all the others, a rose amongst thorns.

As I stood gazing at it, there was a movement beside me, and Roddy was there, saying,”Ah!  You found it, too, how funny. I picked that up 40 mins ago and was going to bring you here to look at it.” And a frisson of magic ran through me, it was obviously meant to be.

“How old is it?” I whispered, trying hard not to arouse the interest of the stall-holder.

“Old,” Roddy replied out of the corner of his mouth. “I’m thinking 17th century at least. Look at the patina on it! It has a stitch-hole too, which will help date it.” And I looked at the hole in the socket where ancient fingers had pried loose the stubs of candles with a nail over many centuries. The brass glowed under my fingers, its sharp corners melted into soft curves by hundreds of hours of polishing….

We bought it a minute later, knowing it was rather special. An evening of research followed, and my accountant friend’s face popped into my mind as I counted the hours Roddy spent on-line researching this one candlestick, thinking of the zeros clicking over on his mental financial time-calculator. But it turns out we were right – our candlestick might just have become the oldest thing in our home. Conservatively, it dates from the mid to the late 16th Century, but it’s possibly older. It might be from the Low Countries, and it might have been made by Huguenot craftsmen – so age-wise, that’s the 1500’s, possibly even the 1400’s. As one of our daughters pointed out, maybe this was being made at the same time Christopher Columbus was discovering America, and at that point even our children are in awe; they’ve learnt a fair amount along the way, but this was something special, even if it is just another part of their education.

My passion for brocantes and their glittering treasures has taught me so much about this country I call home. I remember the time I came across a beautiful old stoneware jar. I picked it up and asked the price and put it back down even faster. It was incredibly expensive. The lady then went on to explain it was from Le Chapelle des Pots, and looked at me as if I should understand how important this was, I nodded and made a mental note to do some research when I got home. Since then I have learnt that this village is famous for its pottery and it is an expensive purchase. I have since visited and bought a couple of old pots from a farmhouse there. It was the first time they had ever left the village they were made in.

It is this sort of history that makes me so excited with my little hobby as my accountant friend called it. But hobby or not, I love it, not just the purchasing but also the selling and the happiness it brings someone else. I love the special messages I receive when something has travelled around the world, wrapped and boxed in recycled packaging and it arrives safely at its destination. Will it ever make me rich, NON! But does it feel right, does it make me happy and many others too? and the answer to that is a very big “OUI, OUI, OUI!” 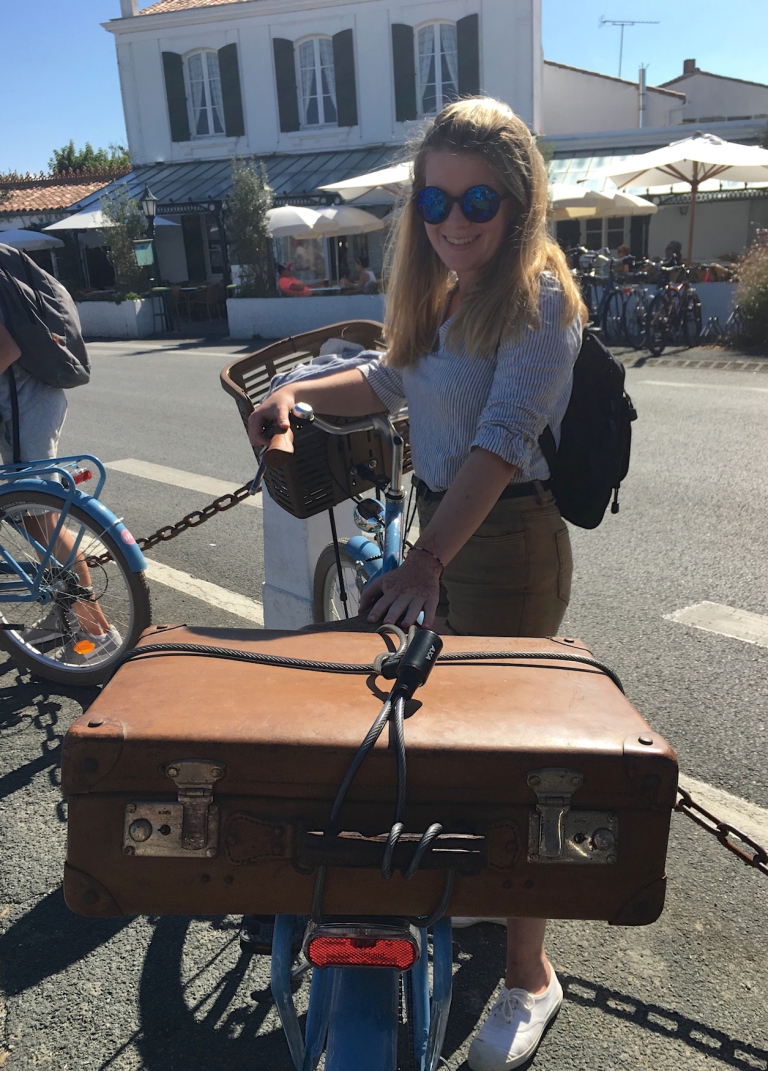 54 thoughts on “A Tale of Antiques”

The fog never lifted, it’s changed the dimensions of our landscape. The temperature has scarcely moved, our dog walk was taken at a very brisk pace, so cold we could see our breath with every step we took.
The mimosa in the garden is in flower.
One of those unexpected little places I just came across.
Not every home is move in ready😂
Some places just look fabulous no matter what the weather’s doing.
Making the most of a calm and quiet kitchen, it’s pretty rare around here!