When I first set eyes on our house, the moment I set foot inside the large entrance gates I fell in love with the driveway lined with a flowering hedge and the sweep of lawn and garden beyond. But that day I fell in love twice, the second time was with the front doors, and both have been love affairs that have not lessened in the slightest, each and every day I still get the same feeling every time I come and go.

Over the coming months I shall bring you interesting snippets from around our home but today I want to concentrate on doors. This might seem like a somewhat boring subject but in fact our house has so many different styles all incorporated under one roof that I find it quite fascinating.

The pair of front doors are of course my starting point, they set the scene and despite the fact that they might be a little drafty in cold weather we wouldn’t dream of changing them. Summer or Winter, it doesn’t change a thing, sometimes they are framed with leaves from the wisteria and purple flowers drop delicate petals at one’s feet. Other times wood is frequently waiting outside the door ready to feed the fires that keep us warm. Any season, we love them!

Once you step inside the hall there are different examples in each direction. This is not a home where everything is the same, it is an eclectic collection that the previous owner obviously took a great deal of pride in sourcing.

Let me explain with a little background history. Our house was originally a barn. Back in 1936 it was bought by a young Parisian as a summer residence for himself, his young English wife and their children. At the time it encompassed 15 hectares of land, a large main dwelling, several barns and a farm cottage. During the 1960’s they sold off the main house with the majority of the land. But they kept several outbuildings, a couple of acres of gardens and the cottage. They converted the biggest of the barns into a farmhouse, long before barn conversions became popular and the ‘in’ thing. This is now our home. We bought this along with the outbuildings, gardens and the farm cottage which is now our holiday cottage/gîte which we so enjoy letting to guests.

But back to the doors. The then lady of the house, certainly had style. The front part of the house now encompasses our boot room, library, laundry room and kitchen. These rooms were originally open barn bays for machinery. They led into the rear part of the house where the animals would have lived and where the old stone walls are two feet thick. Virtually every room is on a different level, you go up and down big solid stone steps into each area.

There are in total 10 different door styles in the main house! This was someone who wasn’t content to go to the local carpenter, give him measurements and ask him to make the required amount. This was a lady who went sourcing antique and vintage items, long before it was a fashionable thing to do. The result a totally individual, one off unique look that I absolutely adore. I so wish she was alive today, because I can imagine she would be the most fascinating lady to talk to.

It seems that if she found a door she couldn’t resist, she brought it home and then afterwards worked out a space where it would go. Not only are all the styles different, but all the sizes are too. This is the door that goes from our laundry room into the boot room. I would love to move this into a more integral part of the house, where I could look at it all the time as I am passionate about it, but and I guess there are no surprises here, it is larger than every other door but one in the house and so it has remained where it is! Almost impossible to photograph and this is truly an unedited view looking right into the deepest working parts of our home. What you see is what you get, warts and all! Looking one way into our boot room/workshop

and the other way into the pantry/laundry room. But I think you will understand why I love it so much.

We have three narrow doorways, and for each of them she sourced old doors from antique armoires. I know this for a fact as her grand daughter told me the story when we bought the house. All three doors are in the Vendéene style, the neighbouring department to the north of the Charente Maritime, suggesting she travelled there to source them. The first leads into the kitchen and is a matching pair with one that leads into the cloakroom. I love the traditional furniture hinge which she kept.

The third is upstairs and is rather charmingly fitted into a curved wall which houses the linen cupboard. The style of this one is slightly different but not dissimilar.

Each has intricate iron backplates.

The enormous door which leads from the sitting room to the kitchen is perhaps the only one which I am sure she had made to measure, most likely out of necessity as the space is large and unusual. Charmingly the handles are antique porcelain and much older than the door itself. Remember this was a barn and the huge arched opening is anything but regularly sized! 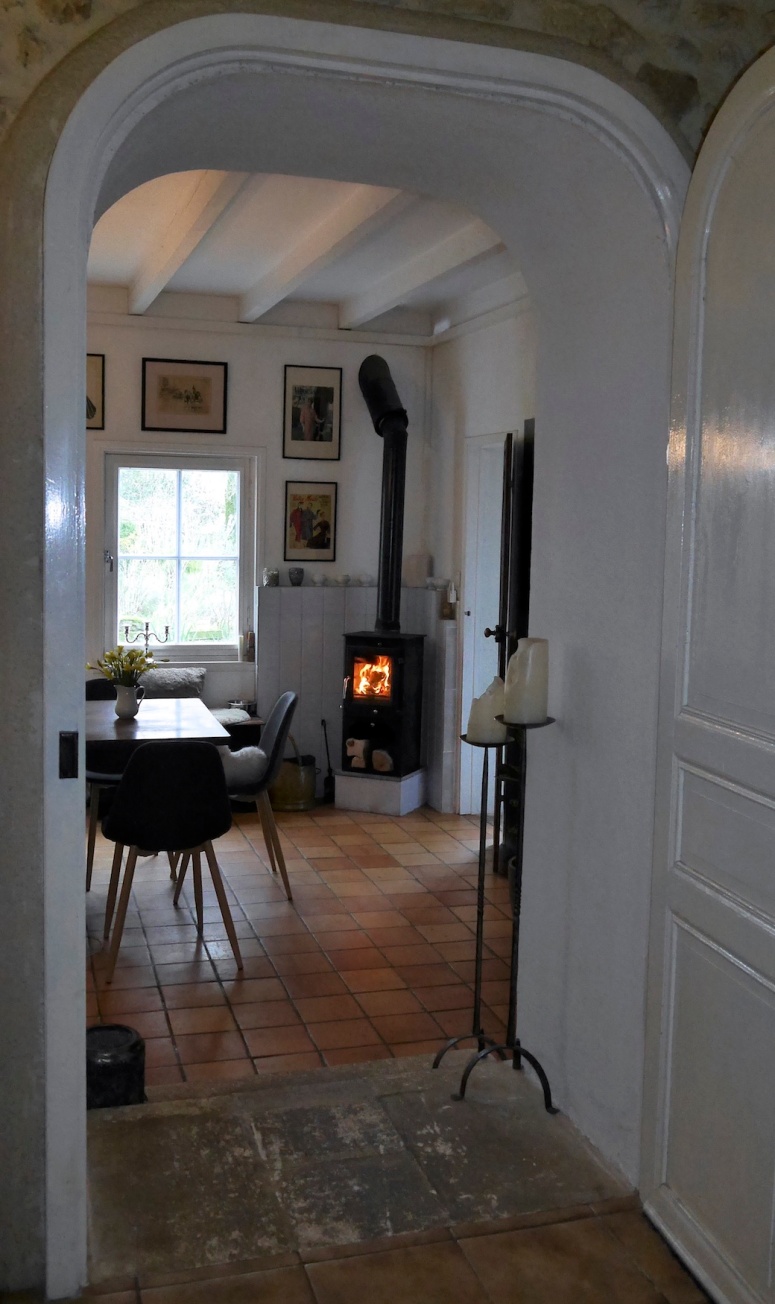 Elsewhere there are a mixture of heavy wooden doors, each slightly different in design and size. 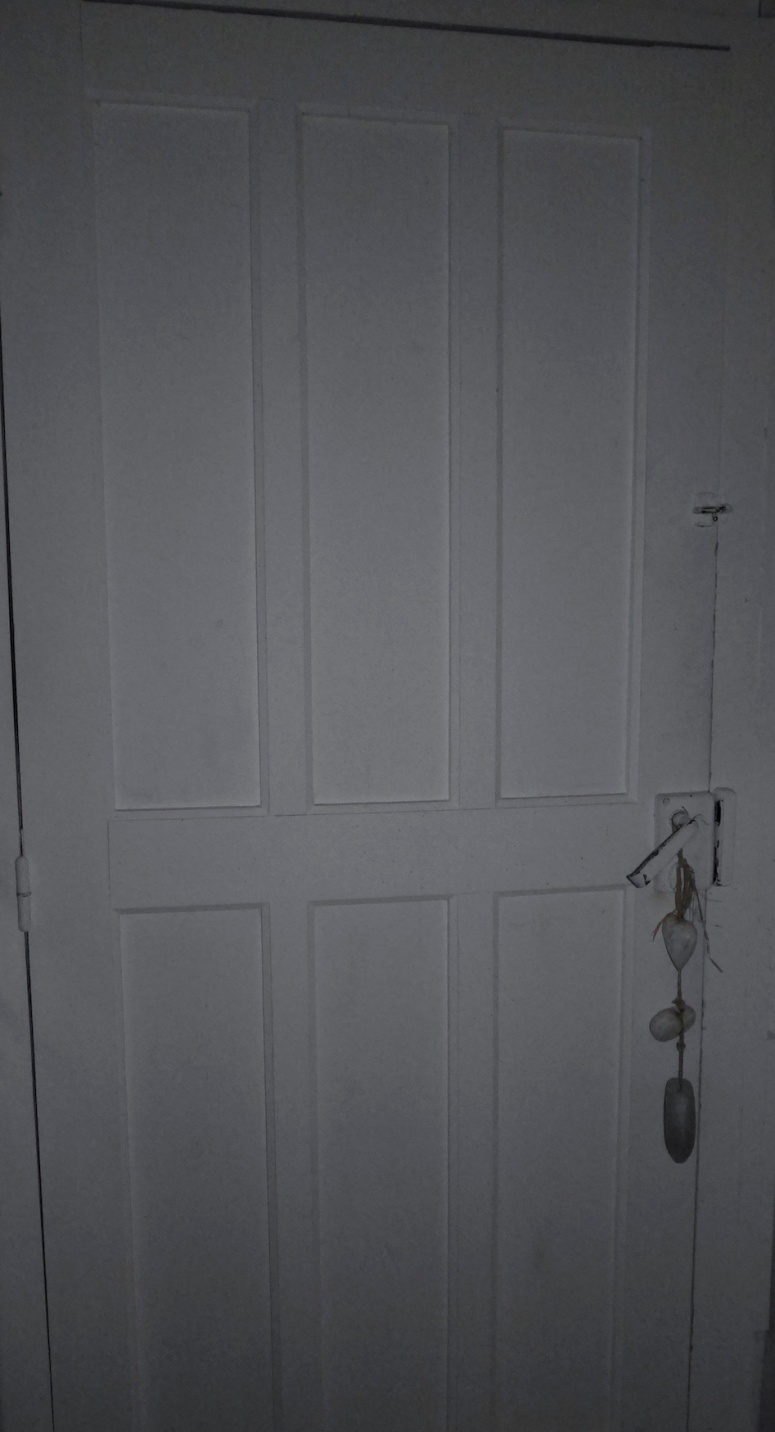 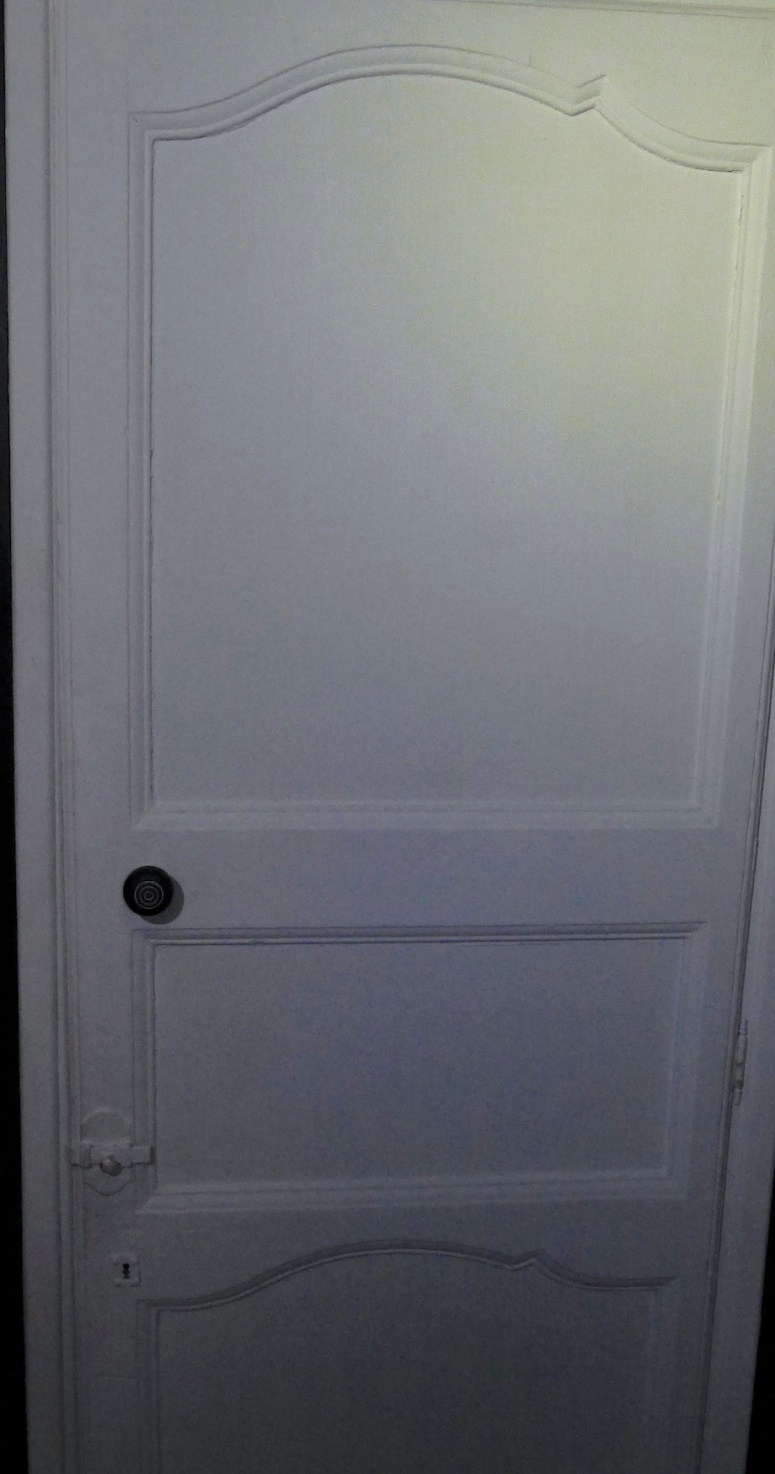 Everywhere the handles are all original too and again differ from door to door. Some have layer upon layer of paint which I have purposefully kept a hint of as a nod to their past. Every time I take hold of one and turn I am reminded of the years of history in the palm of my hand. 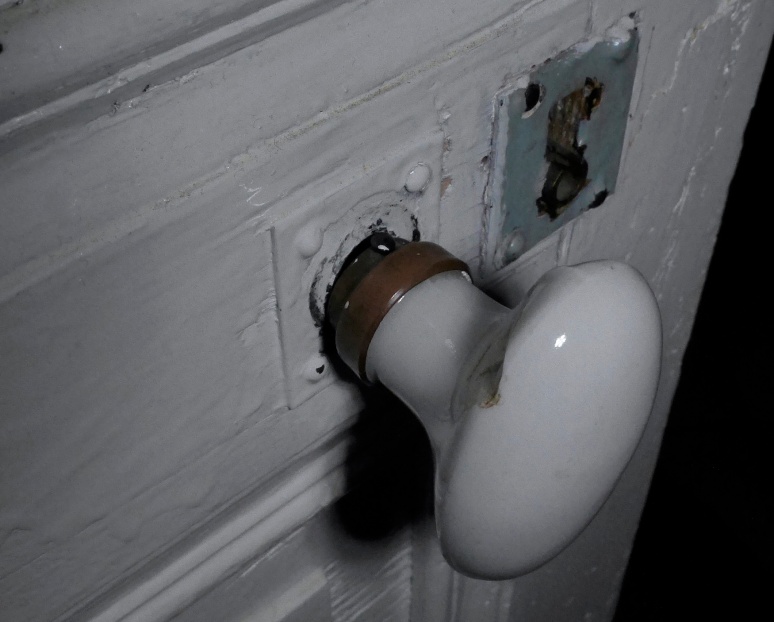 There was only one ugly duckling. A modern (for its time) door which led from the kitchen onto the terrace, most likely a 1970’s addition which was so out of keeping with the rest of the property. In fact this was the dining room when we became the owners, we made this into our kitchen as the existing one (which is now the library) was small and let’s not beat around the bush, it was horrid! The first thing we did was to ask a local carpenter to make us a pair of French doors to fit the space. Now remember this is France, nothing happens quickly. Local artisans naturally take great pride in their work and they take their time. Six months passed before the new doors were eventually fitted, and they are not elaborate, in fact quite the opposite they are extremely simple. In the summer they are permanently open and in the winter firmly closed. They were ridiculously expensive for what they are, because they were made to measure hardwood and the entrance is not even straight, all making it that little bit more complicated! 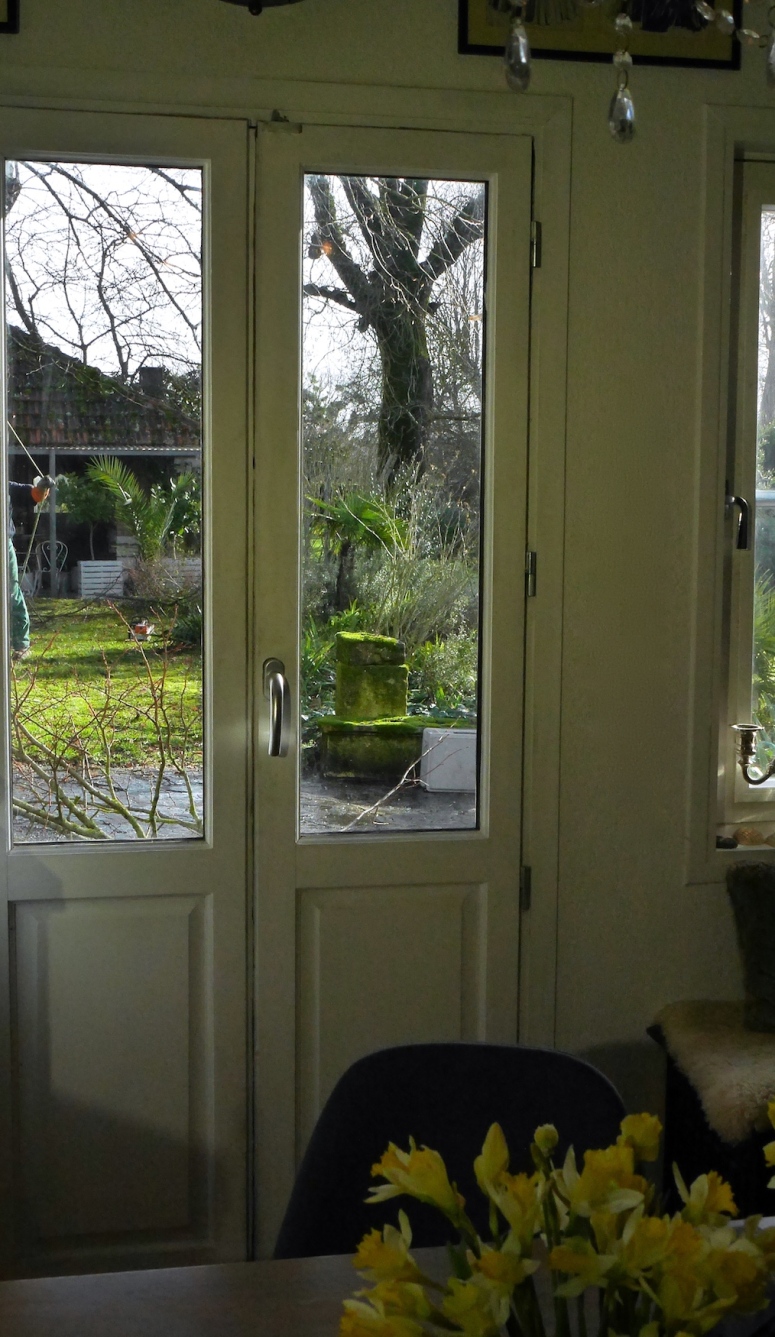 There is a superstition that an old friend in Devon, in the UK, once told me. Always leave a house by the same door through which you entered. So, bearing this in mind, let’s go back to the front doors to end. They still have their original hardware.

Outside is a traditional bronze door bell. Simple and effective, the dogs go mad when anyone rings it! 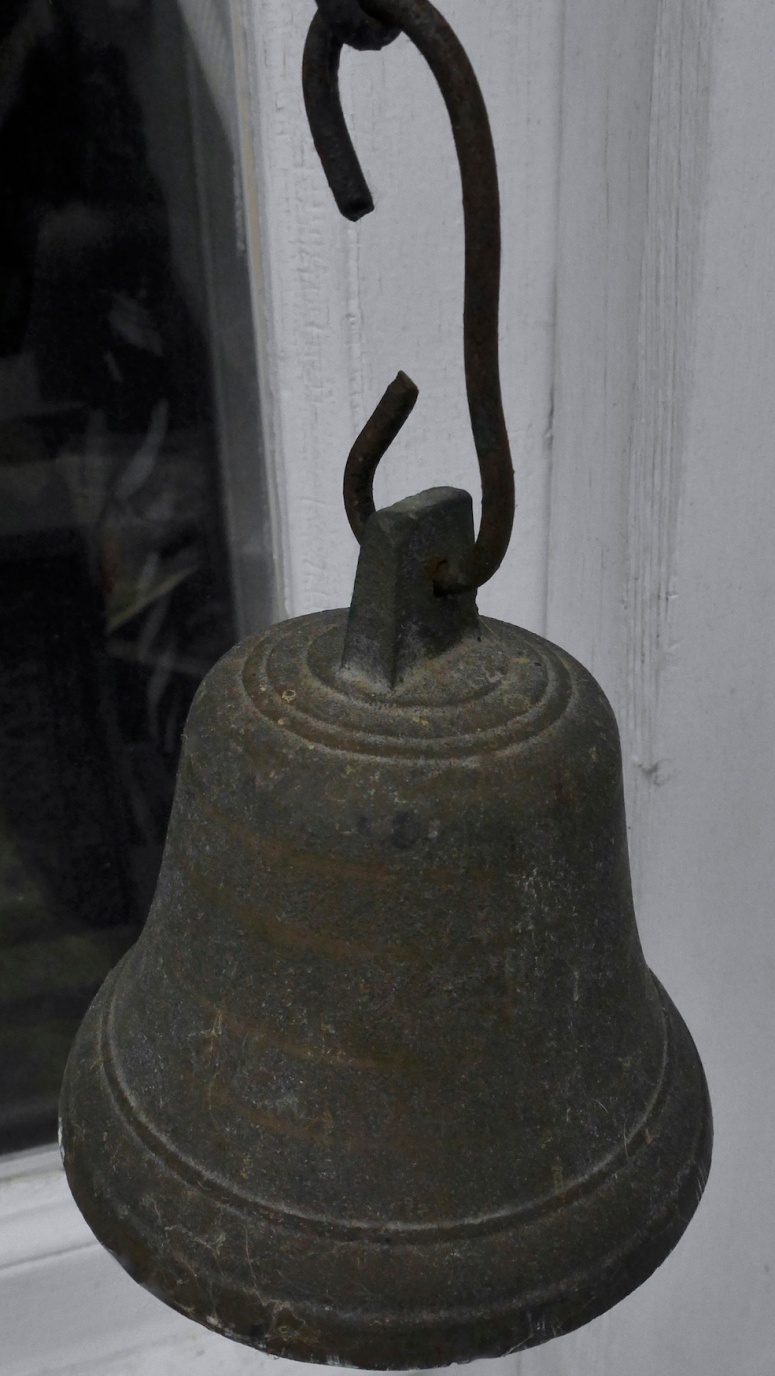 But finally there is the small window in the top section of the right door. This has long been sealed with paint, but obviously once this opened, the original hinges are there to be seen on the inside. Perhaps this summer, I will see if we can restore this back to its original working condition. 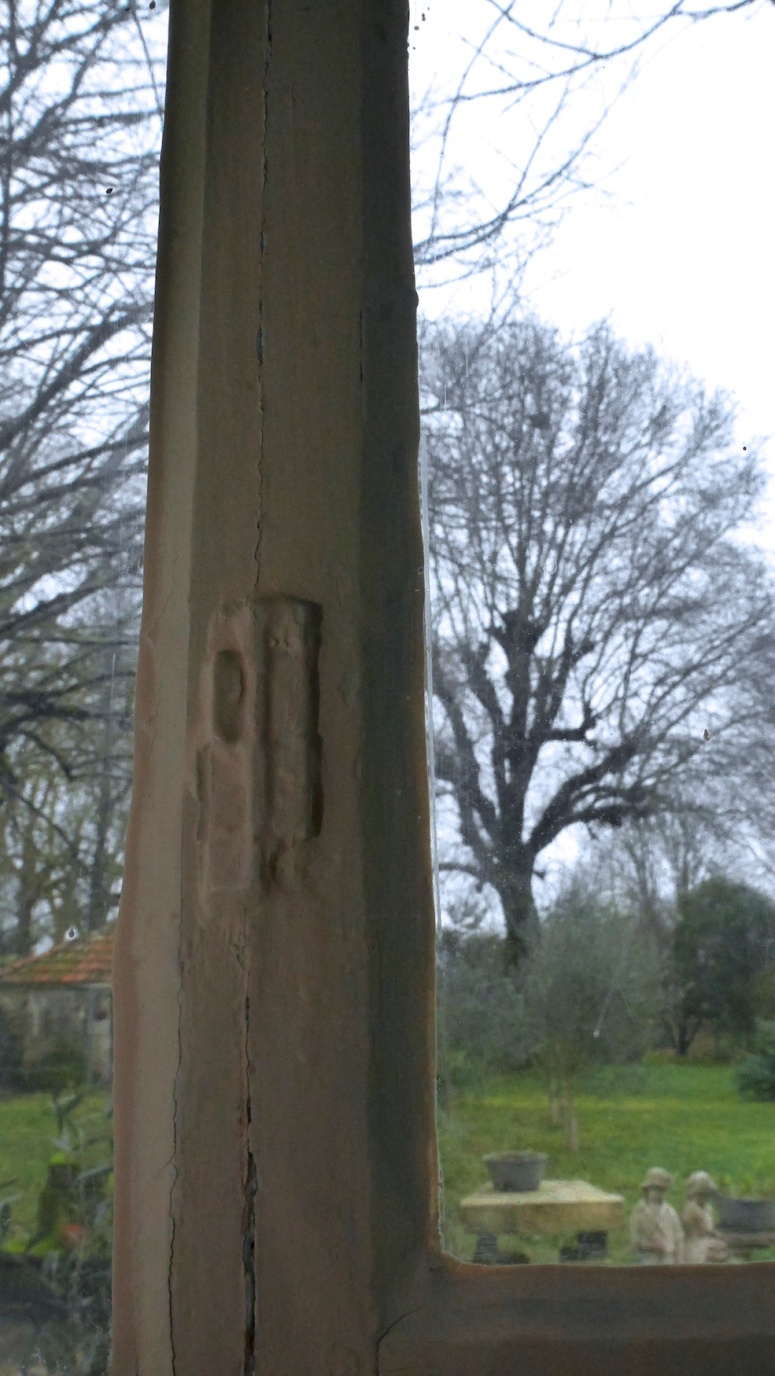 73 thoughts on “These Old French Doors”