Life in a very old farmhouse can sometimes throw up some unusual challenges. In our case one of the biggest ones is getting large items of furniture up and down the stairs.We have been planning a few changes here, most notably a new study for Roddy and a new Brocante room for me. Sounds straightforward enough – what was Roddy’s study will now become my space and Roddy will be moving his office upstairs. There’s just one slight stumbling block, notably a large desk and an even larger old oak sideboard. Both of these heavy pieces now need to go up a floor. Now normally this would be a job that requires some brawn and muscle, and with a few heavy grunts from a couple of men, voilà, the job would be done. But our stairs are too narrow for anything larger than a simple chair. Everything else has to come up and down via the coffin hatch. This mechanism of movement is regretfully named as such due to circumstances from long ago.

Our house was originally built with a steep and narrow staircase and this would have made it impossible for a coffin to be removed from an upstairs room. Therefore, a hole was specially cut into the ceiling and a hatch installed to cover it. Often, when a person died, they were placed in an open coffin so family and friends could pay their last respects. When it was time for the funeral the hatch was opened and the coffin was lowered down through the hole. This is probably also the reason why it is placed right by the front door, for easy access.

Aside from the usefullness of this opening, it is a feature that we wanted to keep. Incidentally, when I first saw the house and the lifting mechanism, the heavy old chain and winch, I thought it looked so interesting that I was determined not to remove it, it would make a nice feature, I thought! Little did I realise at the time what an integral part of the workings of the house, even in the 21st century, it actually was. 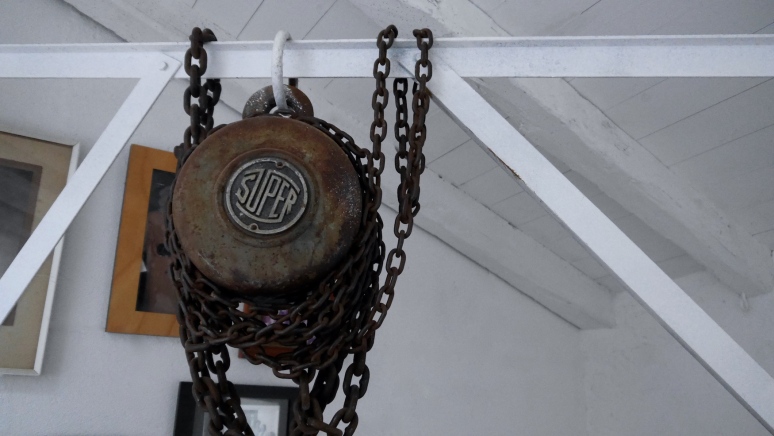 The block and tackle might look like something out of the dark ages, but don’t be fooled; it is a remarkable piece of ingenuity, that something so simple can lift something so heavy without any strain on the operator whatsoever – quite a feat of basic engineering in itself. Pulling the chain is simple, a child could do it, although I hasten to add no youngsters are allowed near it when the hatch is open, it’s a scary space and not a place for kids.

So a simple job, attach the strop, hook it up and hoist. But the desk was wider than the hatch so it took a lot of careful angling, not easy when standing above an open space peering down at the floor below. Gigi was watching on with her broken wrist, Roddy sagely noted “you’ll break more than just a wrist if you fall down there”. Wise words but not what we really needed to hear. I lay on my stomach on one side, shoulders over the open space manoeuvring a desk leg, Millie lay on the other side doing the same, Roddy lay down to help too and we got the giggles, bad timing to go weak with laughter! 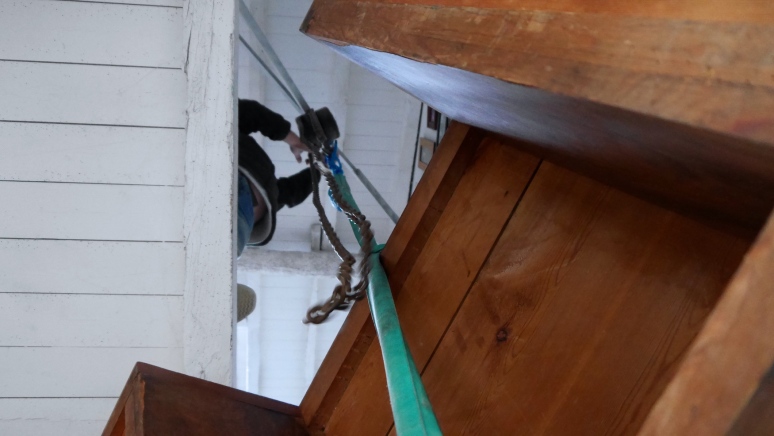 Next up came the large chest, it’s depth gave us 2mm to spare. Hoisting in a confined space means there is no room for error, one swing to the right and all the panes of glass in one of our front doors would be smashed in an instant. 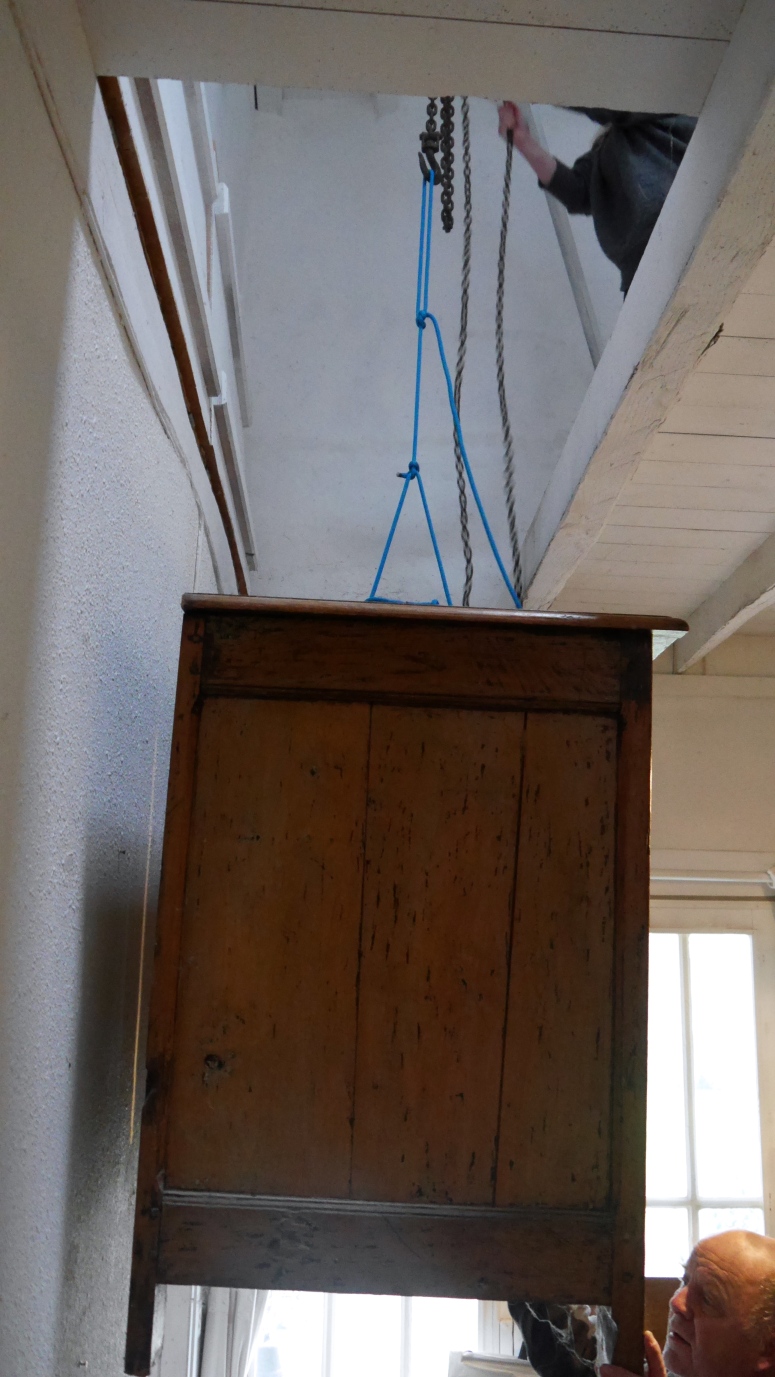 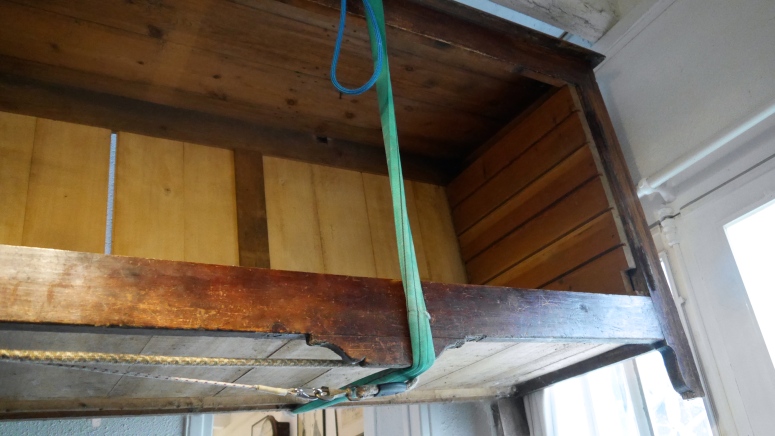 What for most would be a quick 20 minute job took well over an hour. But this method is tried and tested, it takes patience and organisation but is efficient and successful. When all is done, the hatch is closed and life returns to normal!

Now I’m truly excited, my small brocante enterprise will move into the main part of the house. I have so many new items, still stacked on a shelf, unphotographed and unlisted. My new room will give me space and also an area for photography. I can’t wait, but first I have to decorate!

Never one to let inclement weather stand in my way I headed off this morning with two of the girls to an outdoor vide grenier, where the brave stood selling their wares in the chill damp morning air, clapping their hands to try and keep them from turning completely numb. Still, smiling faces greeted us at every corner, even in the depths of winter it is still a surprisingly sociable event, although much of the chit-chat starts with “il fait froid”. This is after all France and it’s one of the things I love so much about living here.

60 thoughts on “The Coffin Hatch”