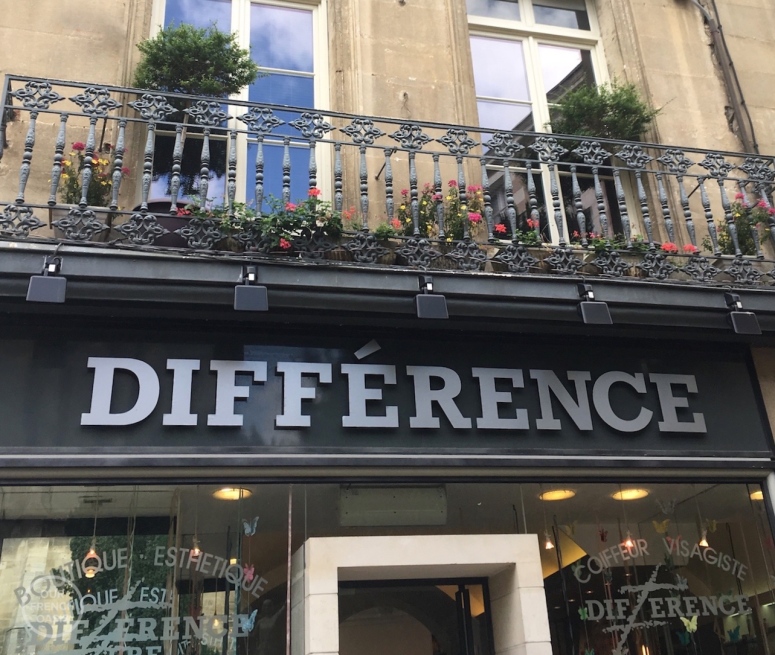 Things are done just a little bit differently in France, and quite rightly so;  for, when in France, one should expect that things are done ‘the French way’. But even loving it as we do, it still means that sometimes we walk into the unknown, not quite knowing what to expect.

Over the years we have come across numerous things that at first caught us by surprise but that now seem so commonplace that we don’t give them a second thought, and often it’s not until a visitor makes a comment that suddenly we realise that what we take as normal is indeed anything but.

Take – for example – the very simplest of things, like moving a piece of furniture upstairs. For most people this involves some muscle from a male member of the family and a friend. For us, though, it means opening the ‘coffin-hatch’. This is a hole in our ceiling, directly over the hallway, where two side-by side portions of the floor are lifted up on hinges and latched into place against the wall. 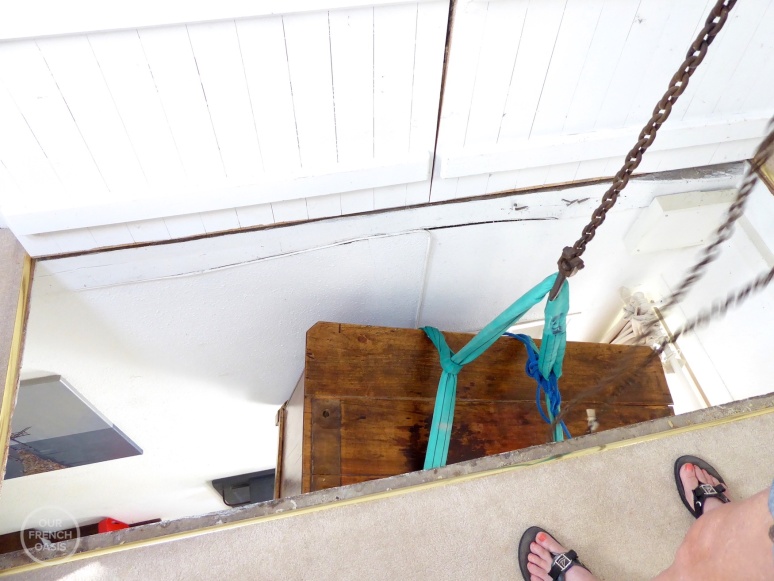 Originally intended to be a means of removing a coffin and its contents after several days of lying in state in a bedroom, the coffin-hatch is a French affair that never fails to enthral.  Opening the hatch is scary, revealing an 80cm by 230cm hole through which it would be only too easy to fall. Despite its terrors, though, it’s a very simple system that has been operating for hundreds of years. I mean, why should we even bat an eyelid at this! After all, there is no other way that anything large is ever going to come up or go down.

Roddy unwraps the block and tackle that sleeps in the crook of a built-in gantry – two lengths of right-angled iron concreted into place in the first-floor wall. He whips the hauling chain through the fixed block in the gantry and the standing chain and moveable block, complete with lifting hook, descends into the hallway with aplomb. I then take command on the first floor while he descends to deal with the item that is going to go aloft. 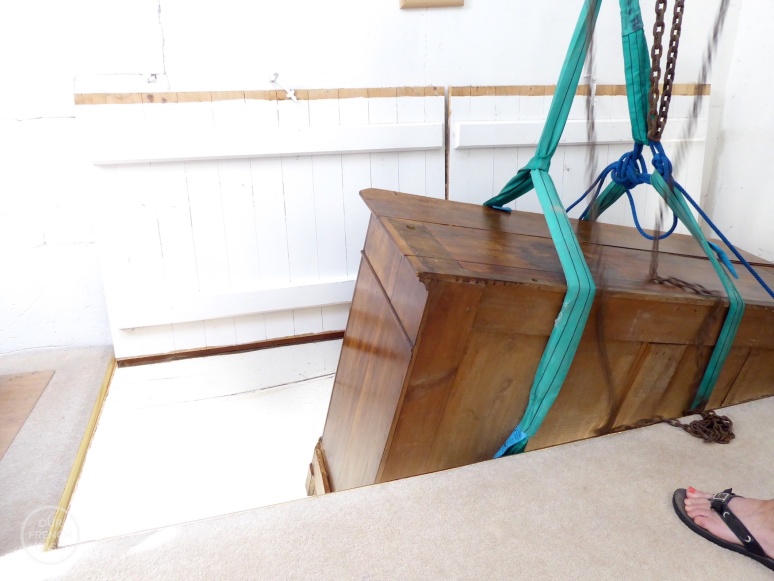 The furniture is carefully wrapped in a pair of strops whose looped ‘eyes’ are then carefully placed on the hook,  at which point I start to work on the hauling chain until the slack is taken up and very slowly, but surely, the heavy and often antique item is hoisted up onto the first-floor landing. 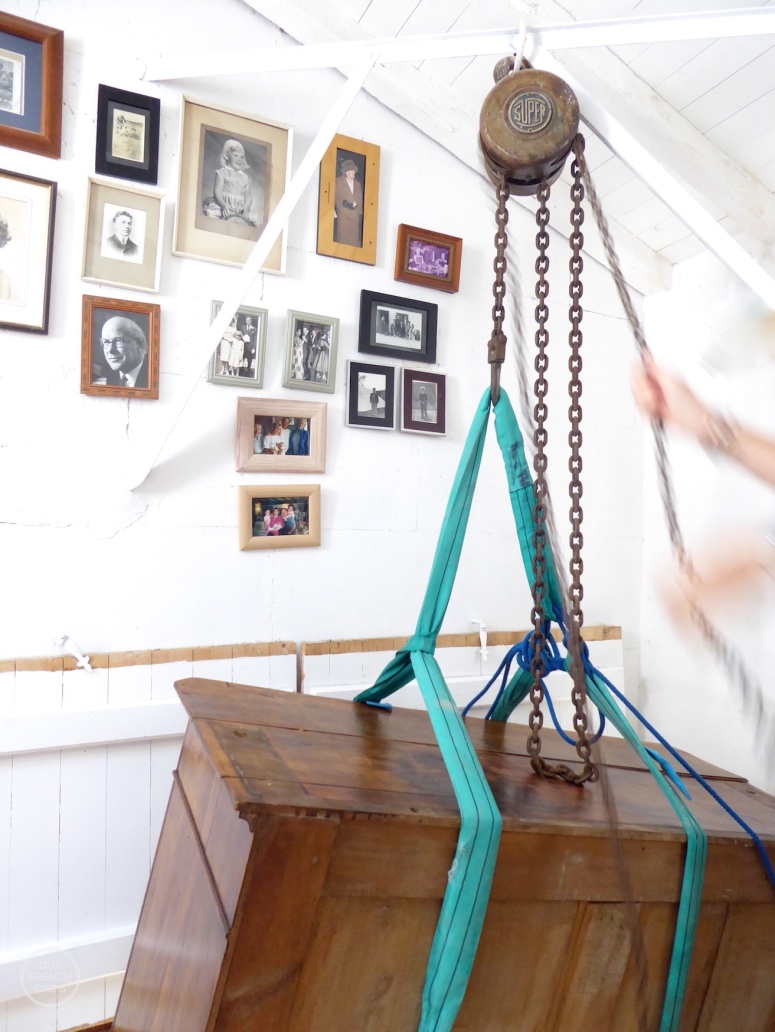 Our garden watering-system is also a little on the archaic side. We have a well, and there is nothing unusual in that, of course, as many houses in rural or semi-rural areas have one too. This precious liquid is quite expensive in France, which is another attraction for a free source of it. The actual process of ours however, is somewhat bewildering to the newcomer. I’ve shown the system on the blog before, because it fascinates me, but when I first saw it, I was as dumbstruck as anyone else who visits us for the first time. Firstly, there is an old wheel and pump that no longer draws up the water – it is now redundant, a cobwebbed relic of the past that sits like a shadow against the wall. But one that we refuse to remove, it is a part of the history. It has been replaced by a far more sophisticated system which was installed in the 1930’s and involves an electrical pump, which at the time must have been quite a novelty in itself.  The pump still works just fine and the only nod to the 21st century is some new wiring, put in place when we arrived. 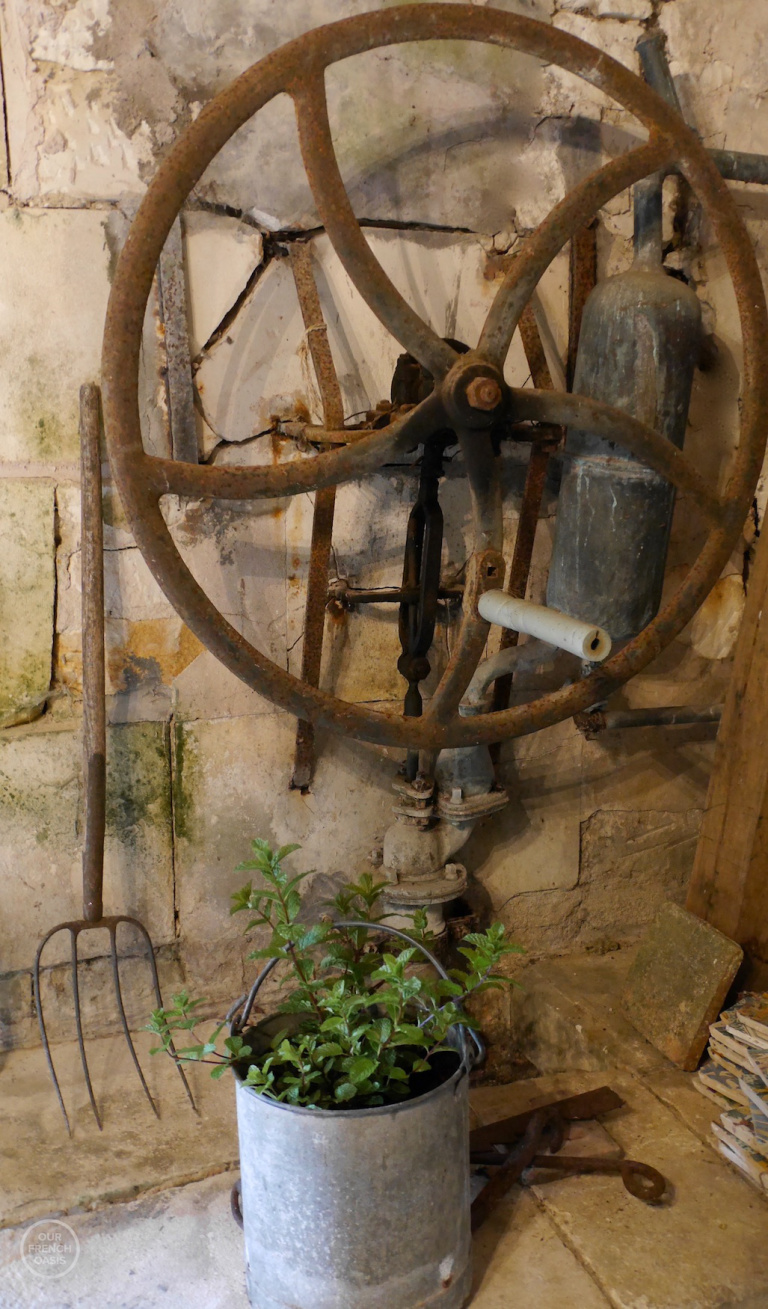 The system has a vast and very heavy pressurised cast-iron holding tank, a pressure gauge, various taps and knobs to be turned and pulled, and metres and metres of old lead pipe and garden hosepipe. 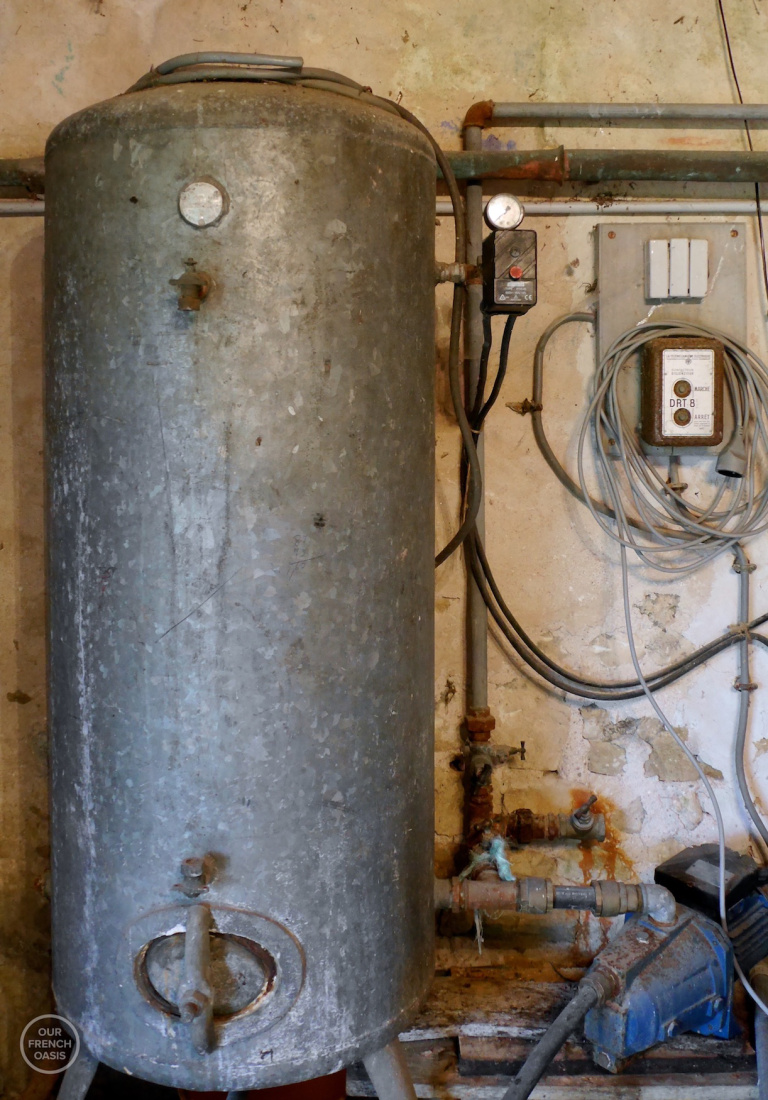 Even though the workings seemed so confusing and complicated at first, it has become second nature to operate for me now, I could do it with my eyes closed and as a result our potager is thriving. 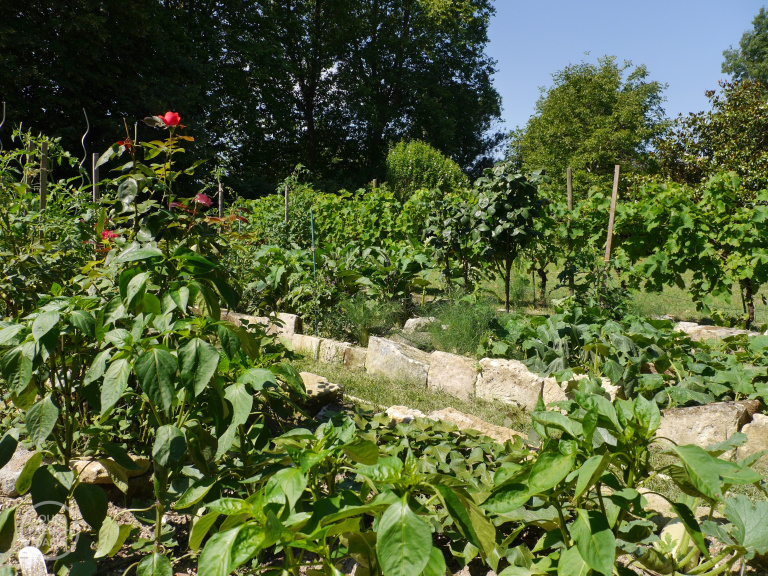 So you see, one way or another, I thought I knew how most things work in France, but there was still one thing in the French system that I had not experienced; university. Millie will be starting at a French university in September and we’ve had a crash course in learning how the system works. The academic side was somewhat easy,  as we were helped by teachers and friends, and Millie held our hand through all of this, the child teaching the parent!

But this week, we had to find accommodation. Unlike the system that I know very well in the UK, it’s all somewhat different here. University is free, which is AMAZING! But there are no halls of residence as such. That wonderful first year in Great Britain where one knows one’s child is going to be eased gently into the big grown-up world does not exist. In France they are out there on their own, so to speak, and so were all of Millie’s friends; we quickly found ourselves in the desperate search for accommodation. Studio apartments disappear quicker than one can read the advert, dial the number and then talk to the owner. Too late! – we became used to rooms being let to someone a few seconds quicker off the mark. 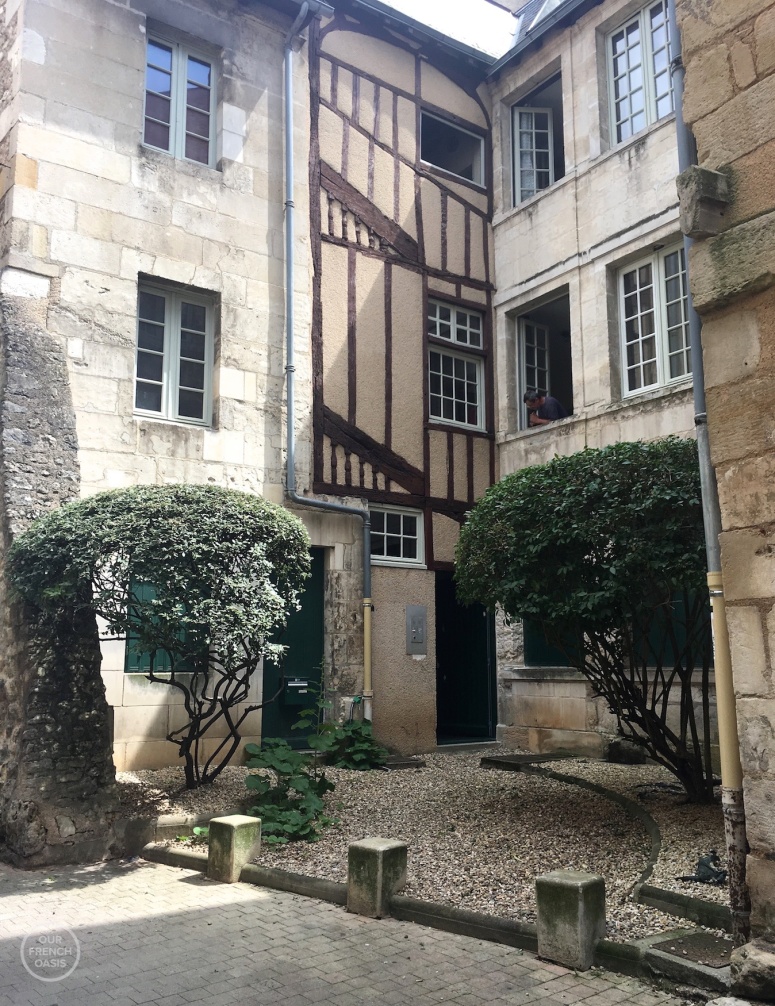 Millie is going to Poitiers. We knew we had to move fast, they have a huge shortage of flats and other accommodation. Monday saw us driving north for a couple of hours to look at possible choices. We were not the only ones, there were several others waiting to look around, each with that slightly lost-at-sea look on their faces, no one really knowing quite what to do. Whether English or French, this was a new phase in these very young adult’s lives. 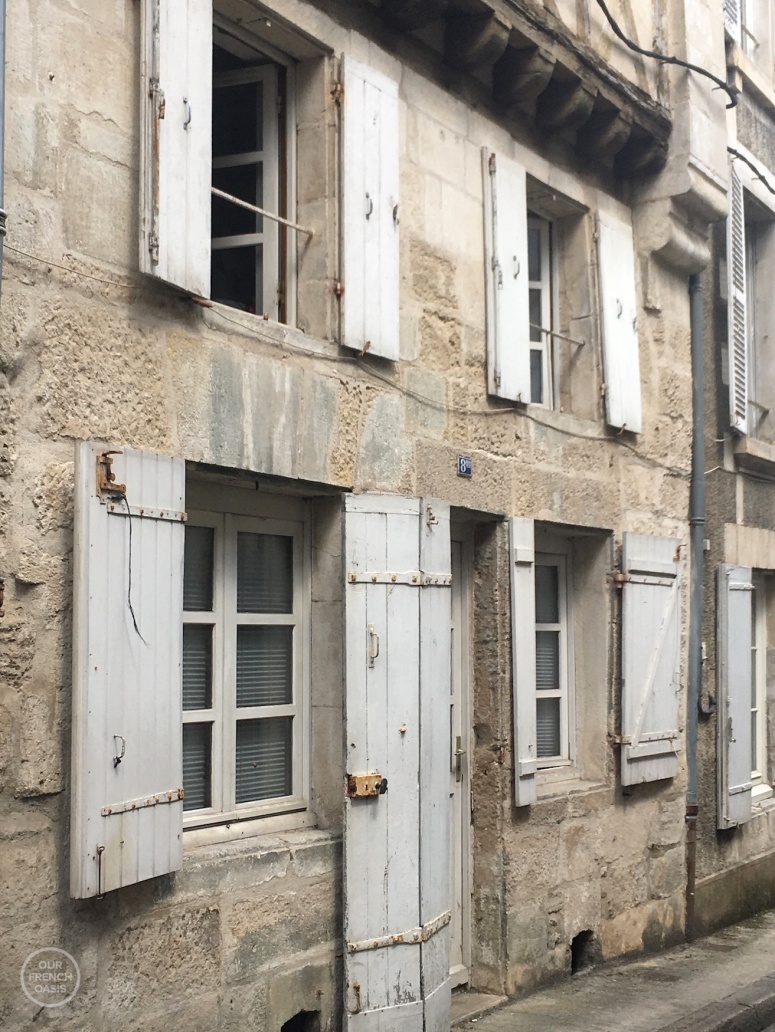 We decided we would have to be quick off the mark, and we both knew the second one we looked at was ideal – with a city-centre location in a beautiful old building which had started life as a private home. The view from the window out over the rooftops made me think of a movie, but I cannot remember which one! 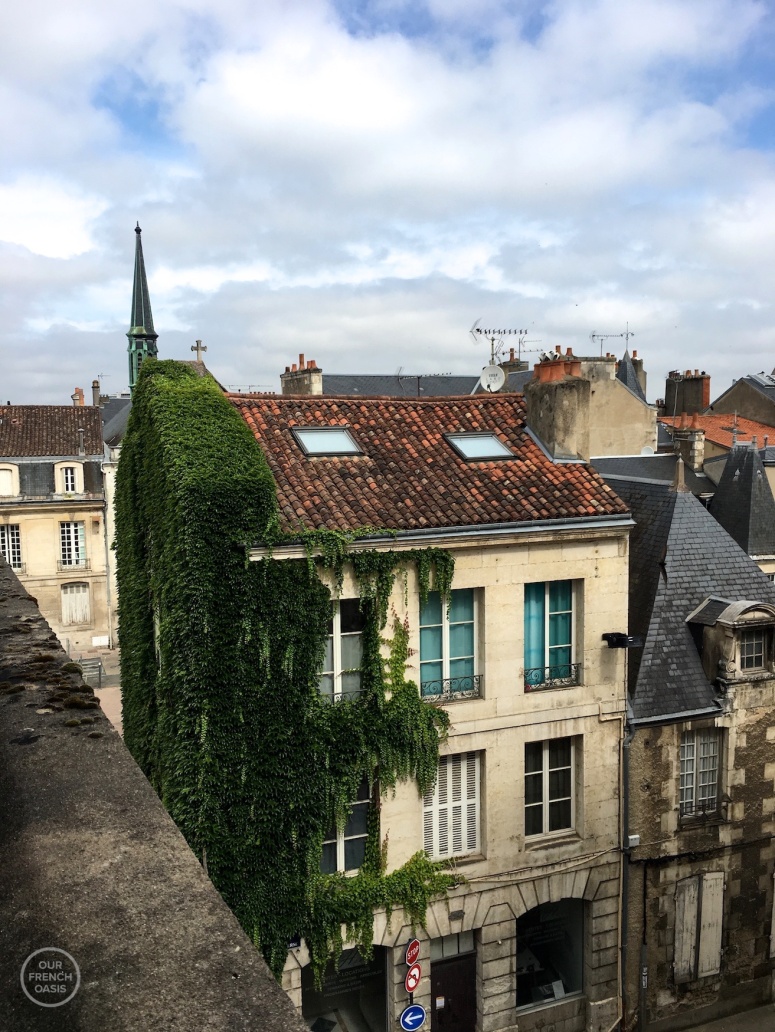 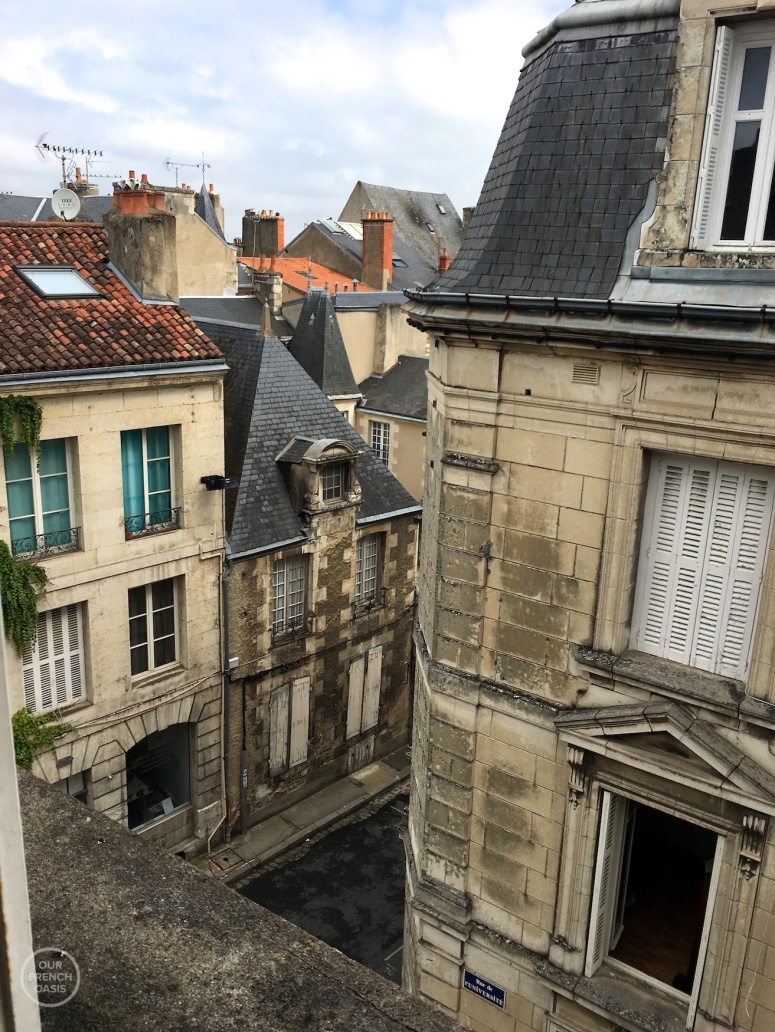 I can think of worse views to wake up to! 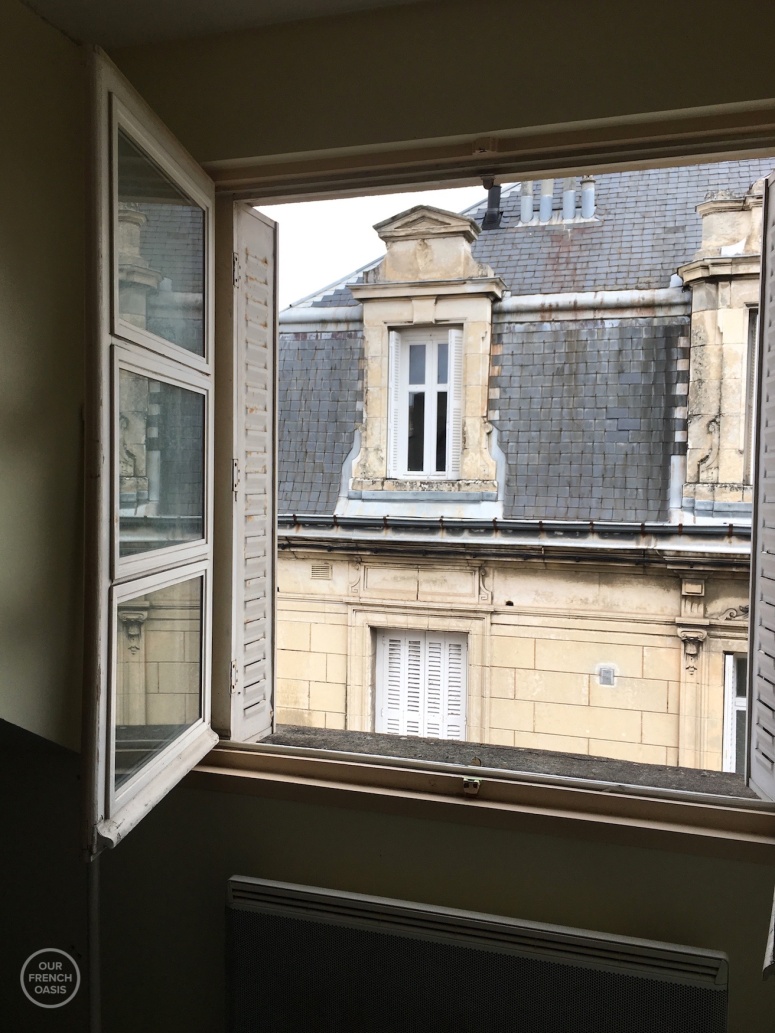 Certain this was ‘the one’, I stepped forward and spoke to the owner; we would take it, I said, before anyone else could beat us to it. We shook hands. Others, too slow and still in discussion, looked bemused at being beaten to the chase. I felt awful for a moment before realising that if I had not spoken then someone else would have done – and it would have been us with long faces heading down the stairs to another listing. In our haste though, I added insult to injury as I reached into my bag to retrieve my cheque book to write the deposit and realised that I didn’t have a pen. Our prospective landlord didn’t either, and he had the audacity to ask the last girl leaving if she had one. Not only had we bagged the apartment and left her empty-handed, we were now borrowing her pen to seal the deal!

Paper work completed, we walked with a certain spring in our steps for less than a minute to the pedestrianised city centre, found a delightful cafe and sat outside with a much-needed coffee. 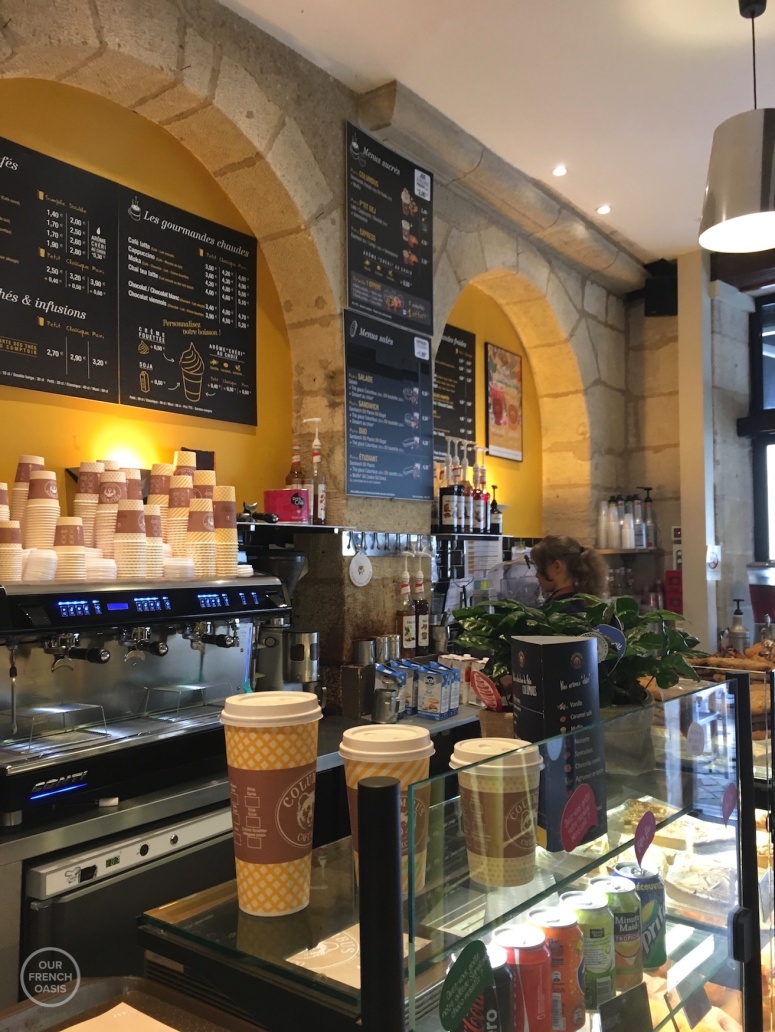 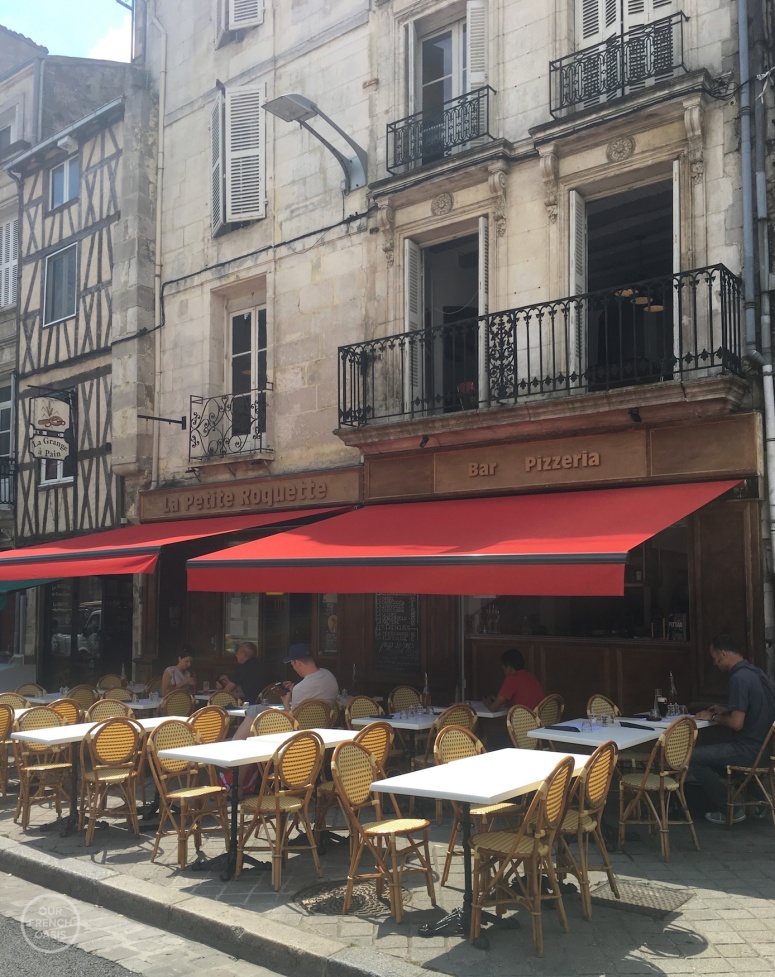 We were overlooking the 12th century carvings of the impressive Roman Catholic church, Église Notre-Dame la Grande. The whole of the building was rebuilt in the second half of the 11th century, in a Romanesque style and was inaugurated in 1086 by the future Pope Urban II. 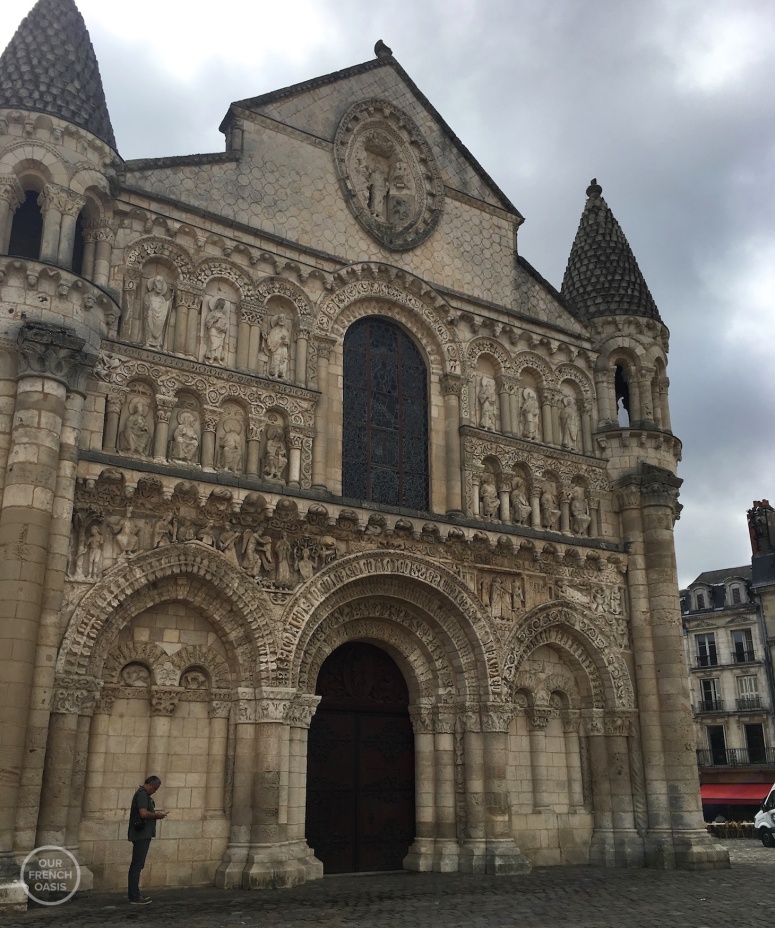 I am ashamed to say I had not very good and totally uneducated, preconceived ideas about Poitiers. Much of it formed in my mind from visits to tennis-courts on the outskirts of the city. I had no idea that the city-centre was this gorgeous and now I cannot wait to visit more often. 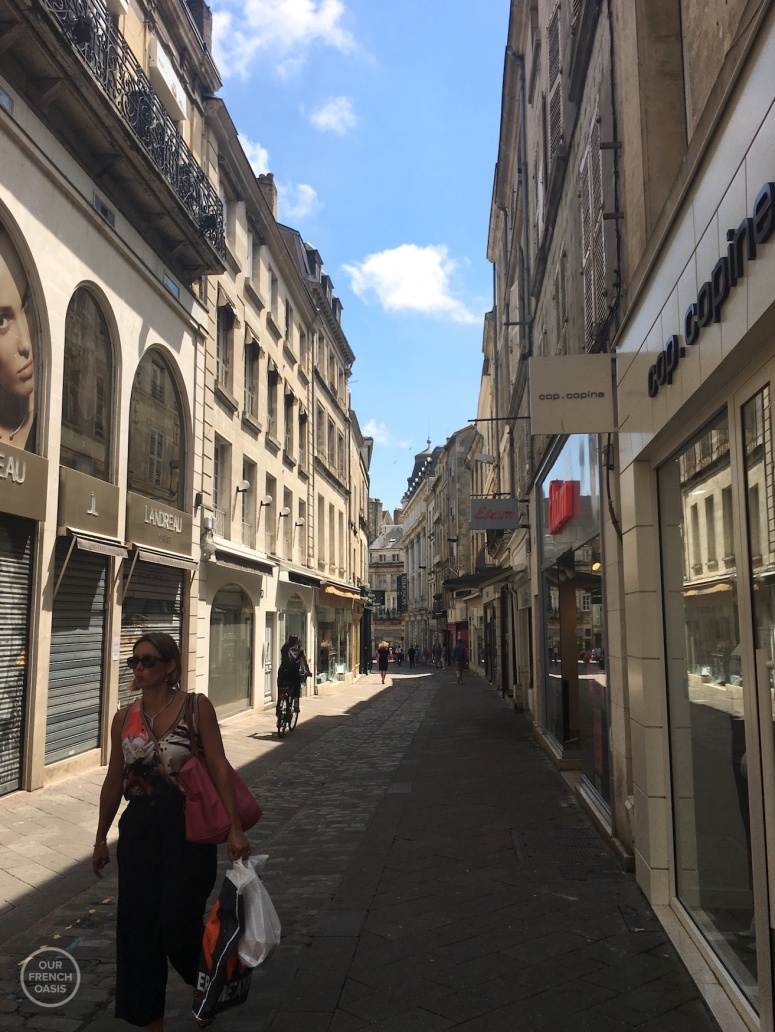 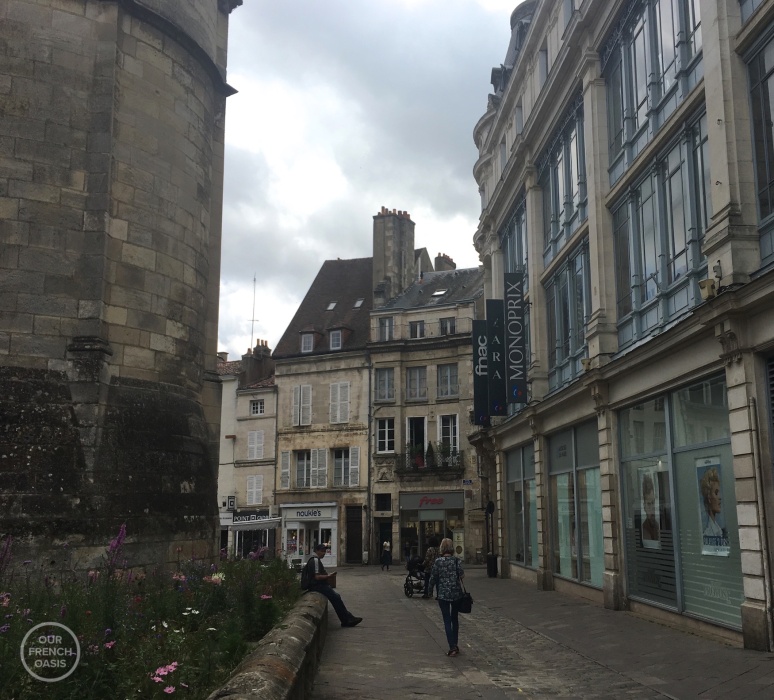 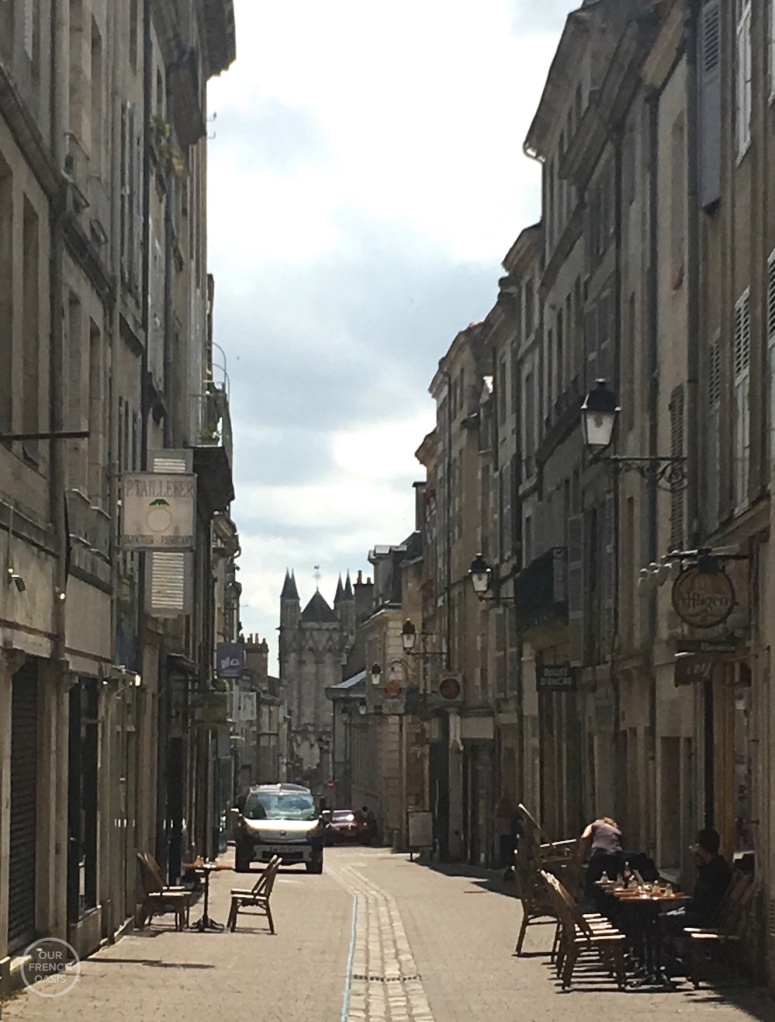 The sun played hide and seek all morning long. 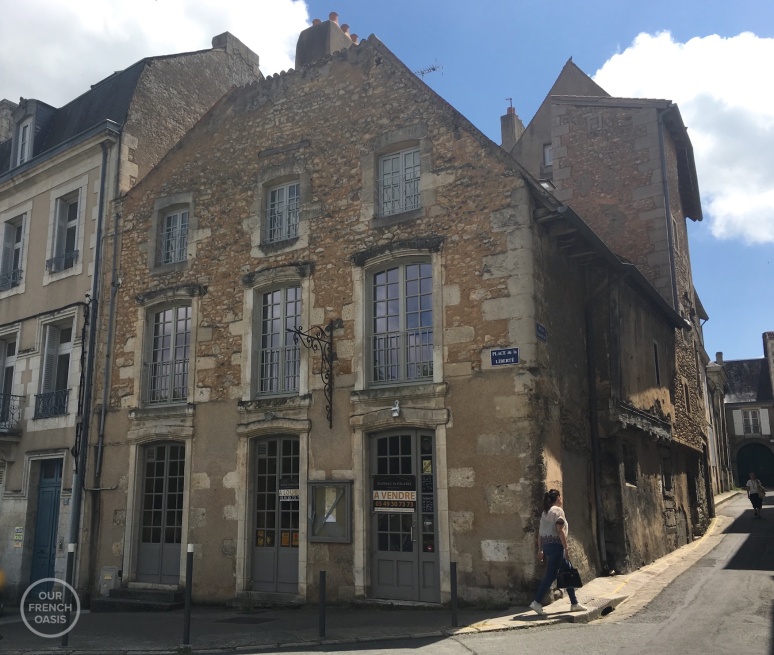 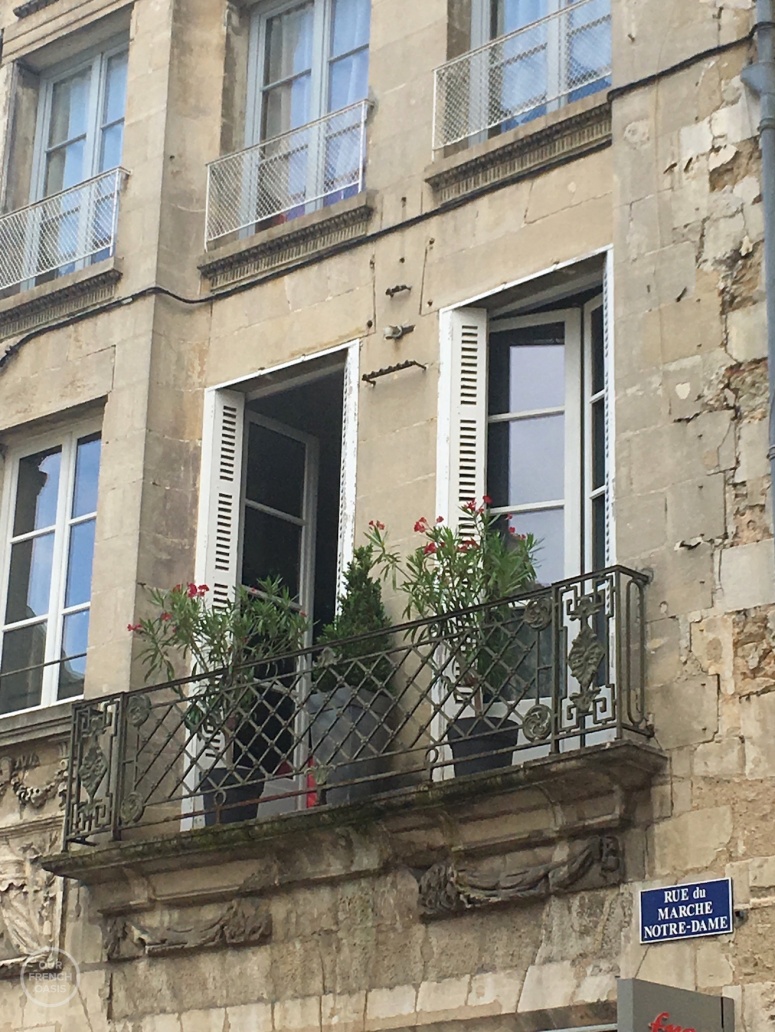 Slowly the number of people walking down the streets dwindled and instead the restaurants filled up. It was lunchtime. 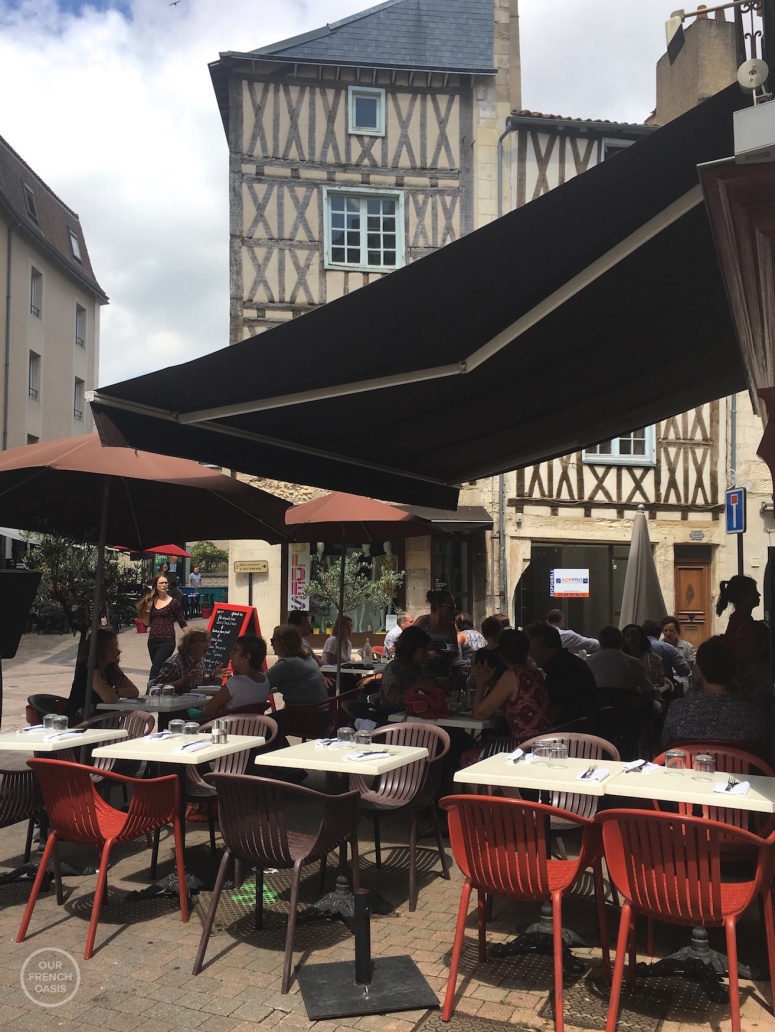 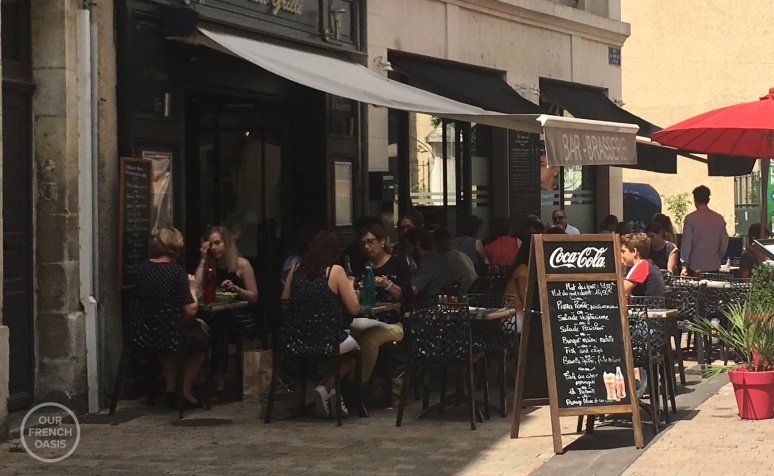 Poitiers abounds with charming narrow streets and half timbered buildings. There are numerous tree lined squares and a buzzing café scene. 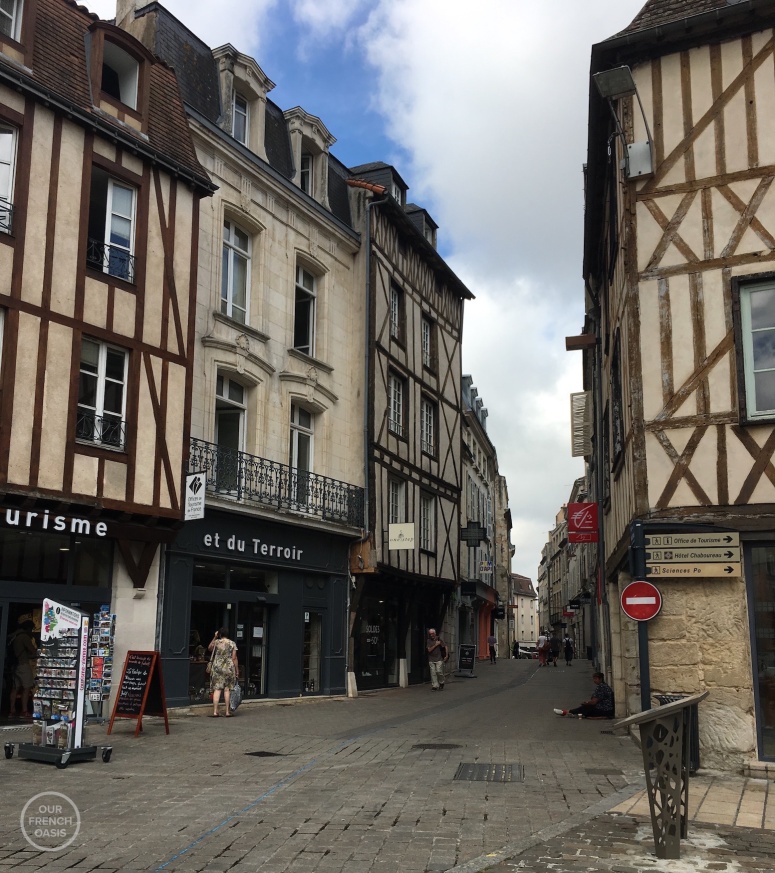 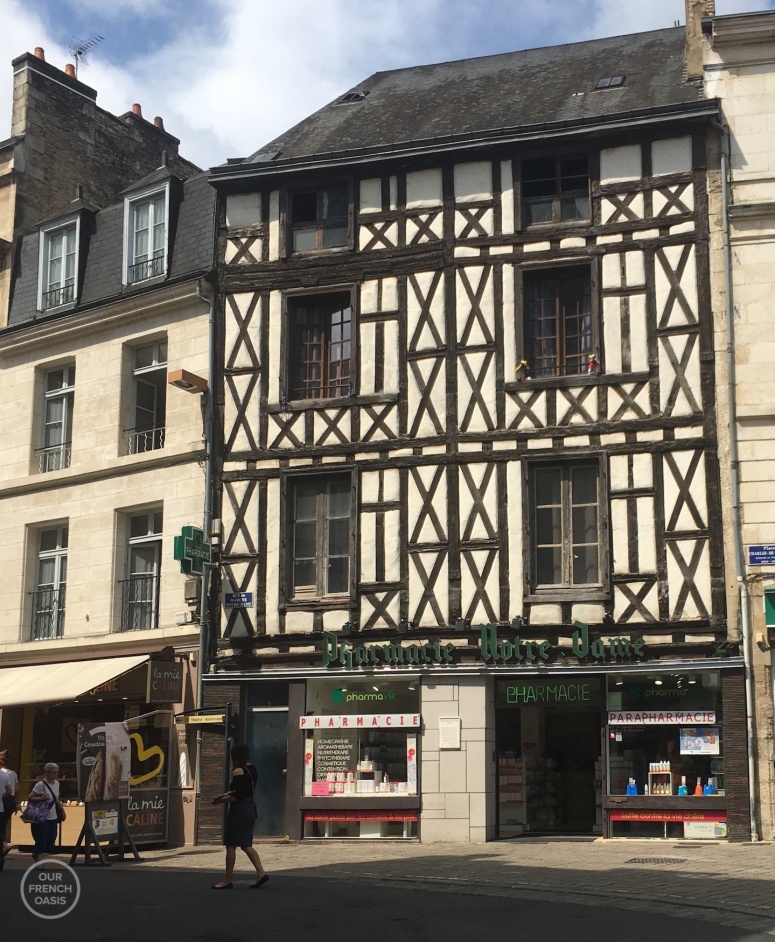 We passed by the huge medieval buildings of the Palace of Justice which began its life as the seat of the Counts of Poitou and Dukes of Aquitaine in the tenth through twelfth centuries. 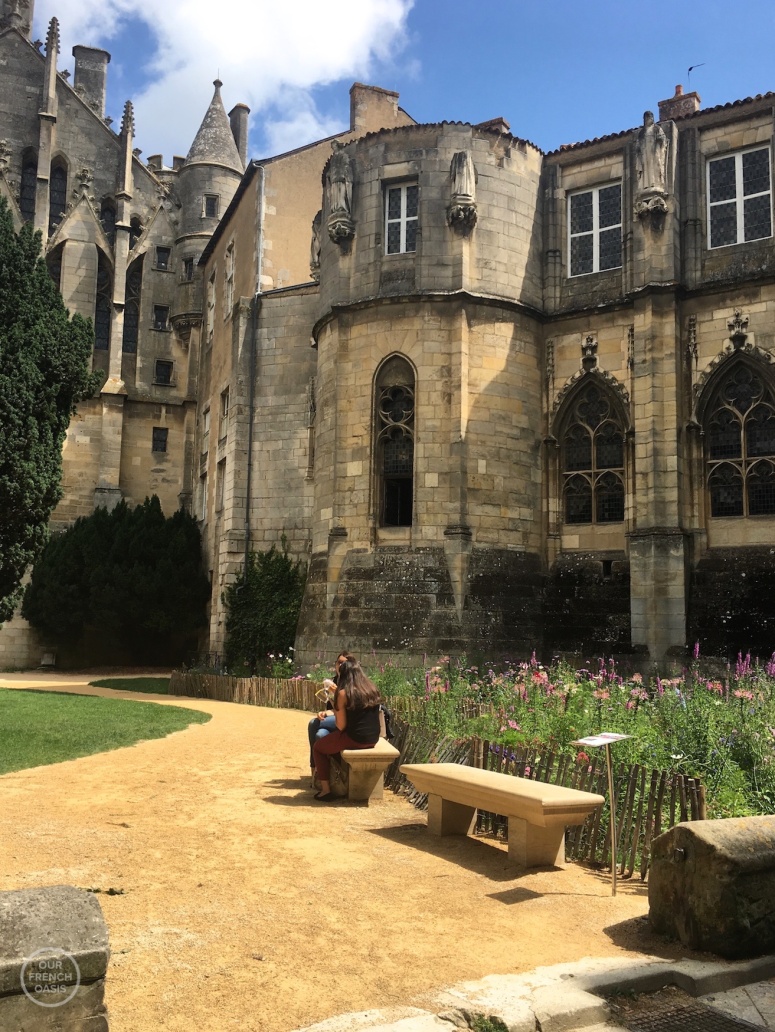 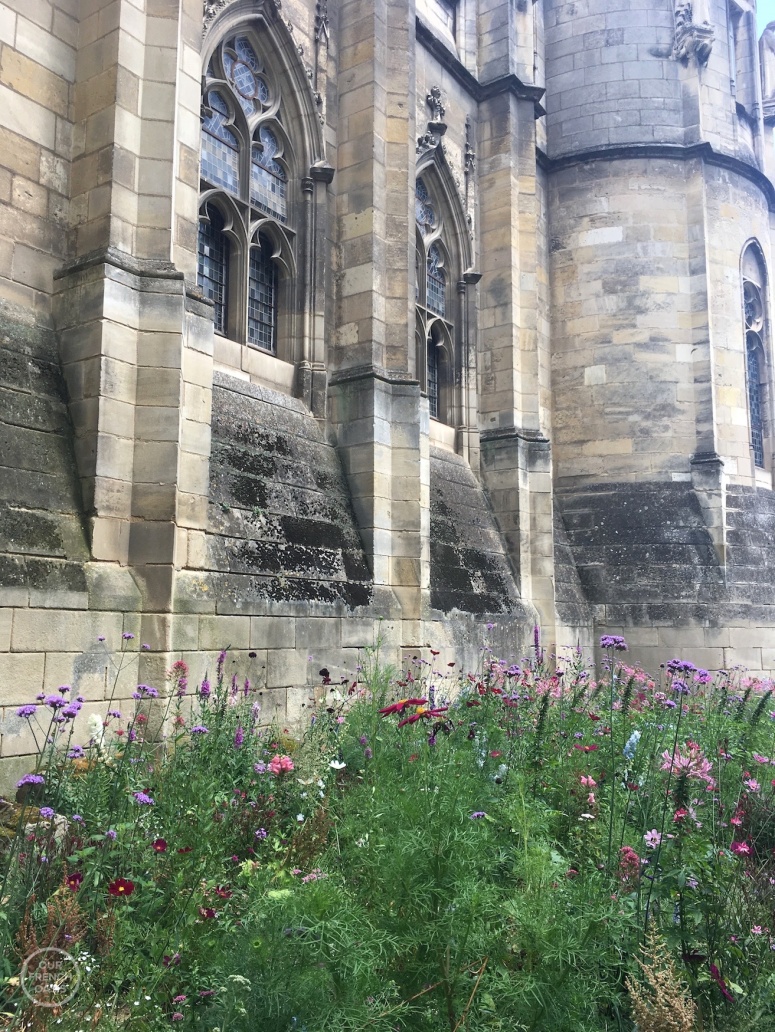 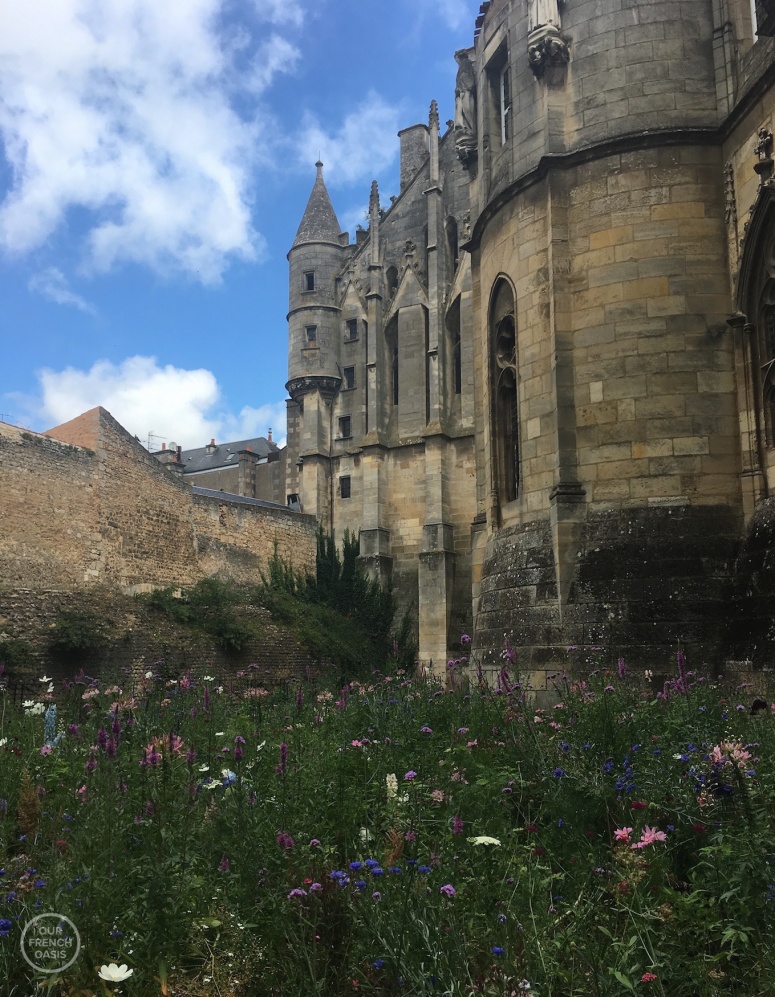 Poitiers was indeed a complete surprise, and like so many things one comes across in France, was yet another example of when to ‘never judge a book by its cover’! 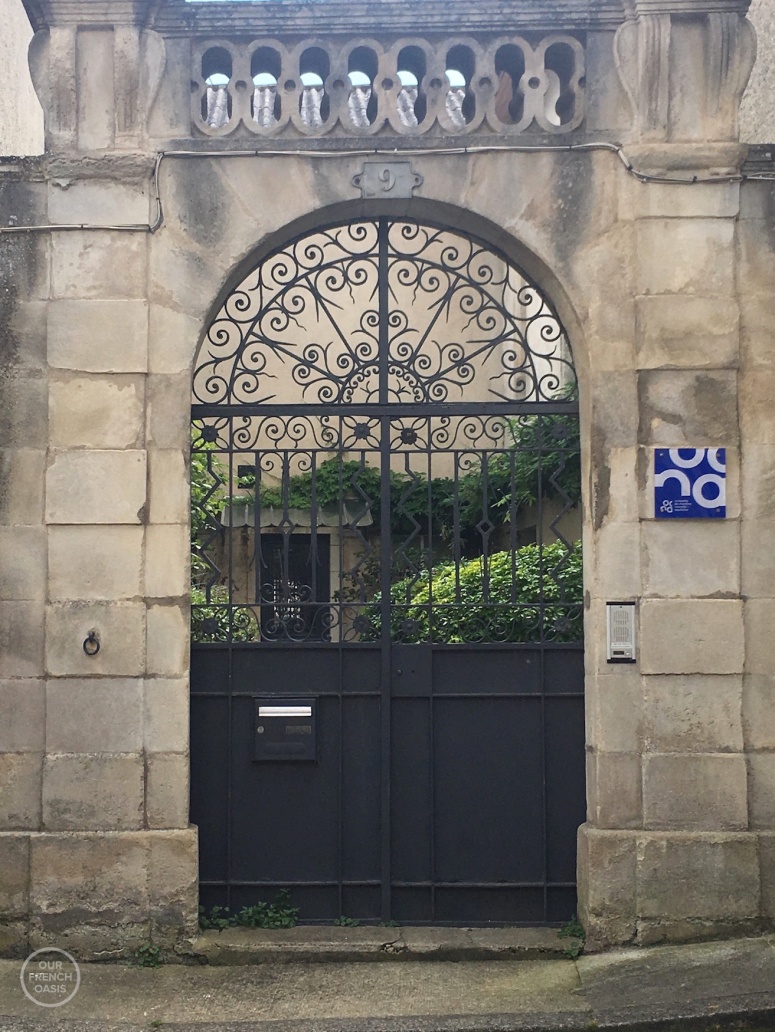