You may well have heard of the shortage of butter in France; supermarket shelves are virtually empty and ranks of margarine and other assorted spreading agents have taken their place. Various reasons have led to this set of culinary circumstances but the situation has really made me stop and think about those times of austerity.

We take for granted that our grocery stores will be stocked with provisions, and during a family conversation at supper, I asked the children, “Can you imagine only having half a packet of butter for the week? You take it for granted that when one is finished we take another out of the fridge and we’re not happy if there isn’t a spare to hand.”

I paused to emphasise my next words. “Imagine not having a choice at all” and their eyes bulged at the thought of not having butter, of not having a stocked fridge and being able to eat when they wanted.

As the discussion continued, I sat back and thought about rationing. The timing of our butter shortage is very poignant. At no time in history have we in general known such abundance, but despite the newspaper headlines screaming at us that the butter shortage is the worst since the end of World War Two, it is truthfully nothing like those hard times, NOTHING AT ALL. Both Roddy and I had parents who fought in that war, as I am sure many of you have. But it’s not a subject anyone talks about much and when they do, I am always incredibly humbled for they never talk of the horrors, instead they talk of kindness and how people helped one another, they even tell amusing stories. We owe everyone who fights for their country, past and present, so so much. 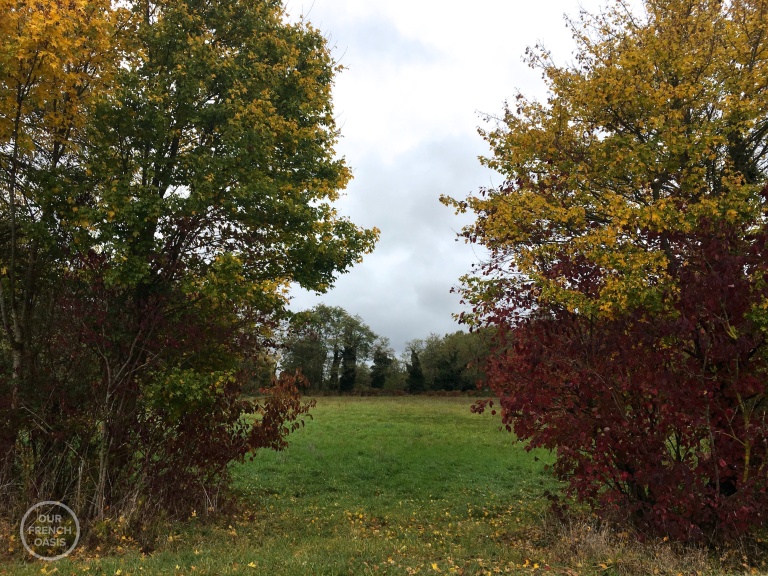 Yesterday was Armistice Day, November 11th. Much of France fell silent for two minutes at 11am, a time to silently remember the fallen, not just those from the First World War, but from all of the wars past and present that have taken so many people and caused so much suffering.

Heavy dark skies rested like a lid over the village and surrounding area for much of the day. We found ourselves in a small hamlet a few miles away with a beautiful church in the middle of nowhere and we stopped and walked. Flags flew on the war memorial and a wreath had been laid during the morning ceremony. We walked amongst the graves, where ancient stones simply carved sat peacefully alongside the new. We picked up a few fallen chrysanthemums knocked over by the wind, and put them back to rights. It somehow seemed wrong to see them laying on their sides and it was the least we could do. 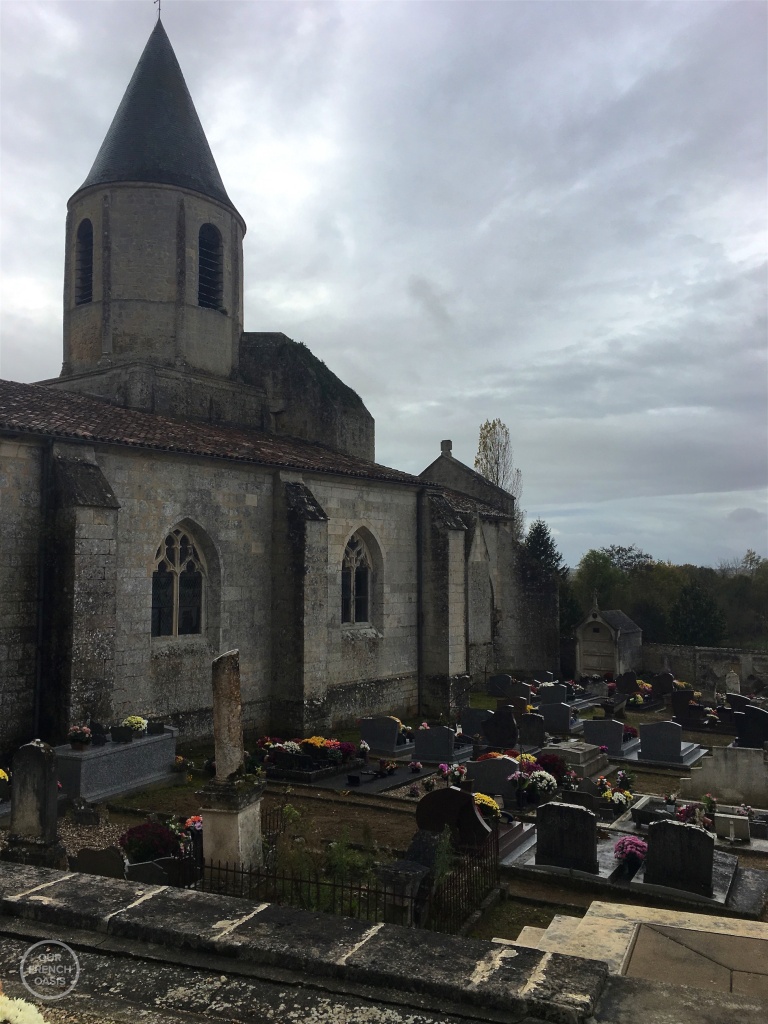 Even the roses were bowing their heads in remembrance it seemed. 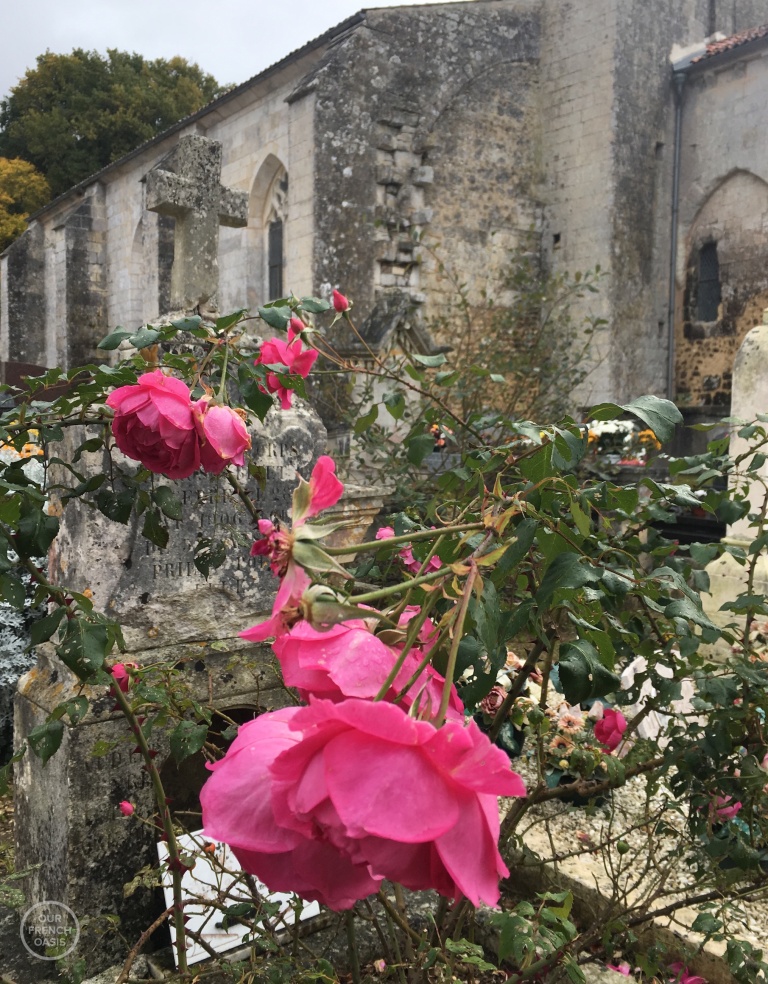 As we crossed the marais on our way home we stopped and said hello to a couple of ponies. The clouds sat broodily overhead, and a brisk wind whipped around our faces, brushing thoughts of past Armistice days to the fore. It was all too easy to fall deep into thought as I walked with the children from fence-line to fence-line.

I couldn’t help but think of what it must have been like 100 years ago. Perhaps it was the peace that surrounded us; there was not a soul in sight, not a sound to be heard apart from the occasionally  stamping of a hoof on wet ground and the swish of a tail. However, I knew that on the way back we would pass a small memorial to an incident that happened 65 years ago – proof that even the marais had memories. 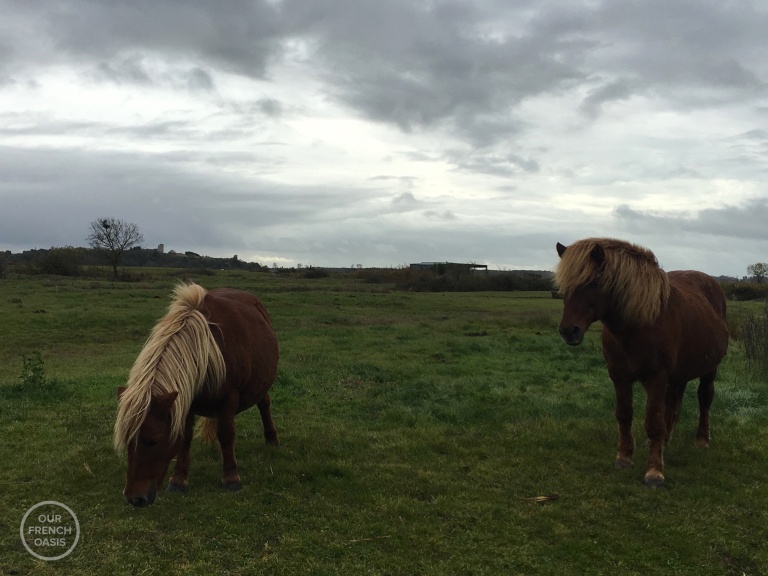 When we returned home, I went straight to the study and pulled out my Grandfather’s old leather case and started to look through the papers inside. It’s something I have done so many times, I feel as if I know them off by heart; but still they hold an incredible fascination and it is a link to a past that I will never know.

Once again I handled the pages of the Liverpool newspaper which he had kept from the day that peace was announced. It’s pages are so thin and worn now, and it has to be handled with extreme care. 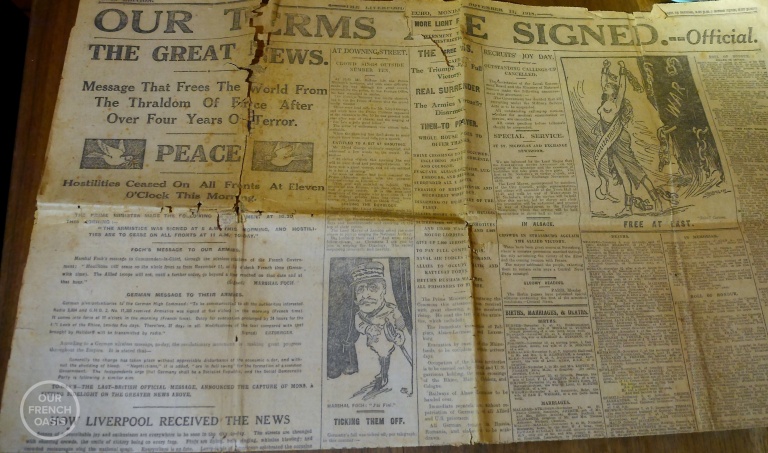 Millie became engrossed and whilst thinking how good the cartoon was she noticed the list of those who “Died From Wounds”. Amongst them is my Grandmother’s brother who died in hospital in Rouen in Normandy. 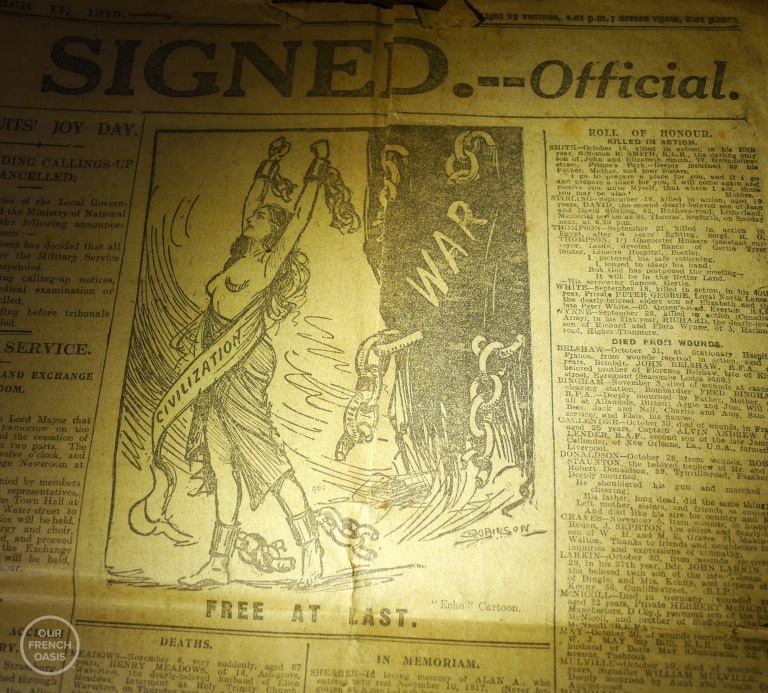 My Grandfather was also in France for most of the war; he took part in the Battle of Passchendaele at Ypres, and he was one of the lucky ones who survived. Although wounded he never talked about those times, ever.

I found myself searching out his diaries, a series of little leather bound books, each with a handwritten entry (very often in pencil) for every day during that long ago war. I found an entry for November 11th, 1918, the day that the war officially ended, by that time he had been moved on to Palestine and on that day he was in a small village by the most southernmost lake in Suez. He was stationed in the Middle East from March 1918 onwards, and the war wasn’t over for him yet.

However, although he never discussed these dark times, he started writing his memoirs when he was in his 80’s after my grandmother died. He employed a local lady in the Sussex village where he lived, Miss Jones, to help him. She set him up with a dictaphone, one of those little things with tiny cassette tapes. Each week he would recount a part of his story, and I am sure it must have caused him untold grief reliving those times, I can’t imagine how he had the strength to go back to those dark days in his mind and relive them all over again and yet he did, in great detail, but he still never mentioned it to anyone outside of his private world with his machine and Miss Jones. Each week she would diligently come to his house, collect the tape and hand him over a sheath of papers on which she had typed everything she had transcribed from the week before. There are more than 391 of these A4 pages, tucked away in an old leather briefcase that dates from a time long ago.

I remember Miss Jones vaguely, a tall woman with brown hair who wore glasses, always dressed in a tweed skirt and twin set. My grandfather’s  story starts with his earliest memories of life in Cheshire around the turn of the last century, for he was born in the 1890’s. Most of the diaries concentrate on the years during the First World War but they do end with a summary of life after my mother was born. He lived until the ripe old age of 91 and next year I hope to find a way to publish the diaries as part of the celebration of 100 years since the end of the war, because I believe it is probably quite rare to have such an introspective account of the war years accompanied by his dairies. Not every page is gruesome, although there are plenty of stomach turning gory details, but there is much humour too and a constant pining for my grandmother, not even his wife at the time, but the love of his life. Reading his diaries is also a reminder of how important letters and links with home were, I believe this is what kept many of the men sane.

Here’s an excerpt from 1918 and his first morning at the front line in Palestine.

“The fighting in the front line and the reserves was also in complete contrast to Flanders. There we had lived in a hole in the ground within shouting distance of the Boche. In Palestine we were on top of high hills. On the evening that I joined the Battalion, the Major took me with him on his tour of the posts – an undreamed of thing in itself to have happened in Flanders.  It was dark and I hadn’t the faintest idea where we were. I was just stumbling about over boulders and there would be the occasional whine as a bullet ricocheted from one of them.  I didn’t like it one bit.

The next morning, just before dawn, I was taken up to my Platoon’s post. I was introduced to my sergeant. He greeted me with a “Good Morning, sir” in a voice which might have been addressing parade. I thought, “My God, we’ve had it!” and would have dropped flat except that the Sergeant was still standing. As far as I could see, we were at the end of a wide plateau extending in front of us with, presumably, the Turks holding the other extremity so, in a hushed whisper, I said to the Sergeant, “Where’s Johnny*?” and in the same stentorian tones he pointed across a wide valley to a ridge of hills just becoming visible and said, “He’s somewhere on the back of that other ridge, sir”.

I never felt such an utter damn fool but that was the sort of country we fought and lived in.”

*Johnny was a slang term for the enemy

Cleaning out the potting shed.
The final Days of February
Despite these beautiful sunny days and a real sense of warmth in the air, the evenings are still decidedly chilly, reminding us that winter isn’t quite ready to let us out of her clutches.
Love this time of year, when the blossom is out and spring is in the air
Today is all about this incredible blue sky. The bluest of blue and a very warm 20C to match it😎
Filling window boxes with tulips, dreaming of spring and enjoying the warmth of the fire in the potting shed! Seems like a pretty good way to idle away an hour on a Sunday afternoon😂