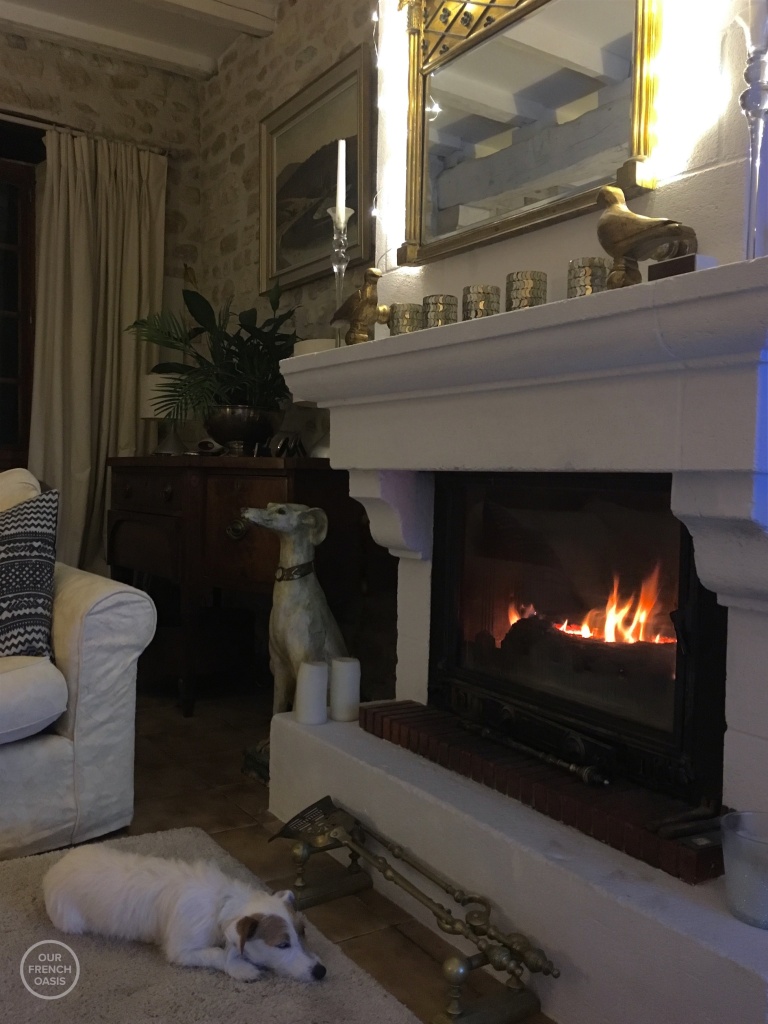 It’s hard to believe we are in November; the clocks have gone back an hour and the evenings have that distinctive chill, tinged with the smell of wood fires. Autumn has crept up on us  really, and all around I’m starting to realize that there are little signs that winter is not far behind. Smoke curls from chimneys in the evening light, leaves litter the ground, and coats and scarves are starting to make their annual appearance.Yesterday was a public holiday in France –  La Toussaint (All Saints Day), a celebration created by Pope Boniface IV of the Catholic Church to originally honor all the saints and martyrs who did not have their own holy day. Over the centuries, matters seem to have spilled over into the common realm, too, for now Catholic families all over  France not only celebrate the lives of all the saints, but also visit cemeteries across the country to remember their loved ones – a tradition to which we are intimate witnesses in more ways than one as not only is our local cemetery but a stone’s throw away, but we have local friends for whom the day is tragically important.

It’s a windfall for florists too, as in the run-up to La Toussaint chrysanthemum-sellers can be found outside many cemeteries with huge displays of perfectly manicured flowers, ranging in size from small posies to enormous tubs of blooms. Garden centres and supermarkets are also stocked to bursting with pots of these flowers in a vast array of opulent hues and the cemeteries themselves become a riot of colour as nearly every grave is blessed with floral offerings. 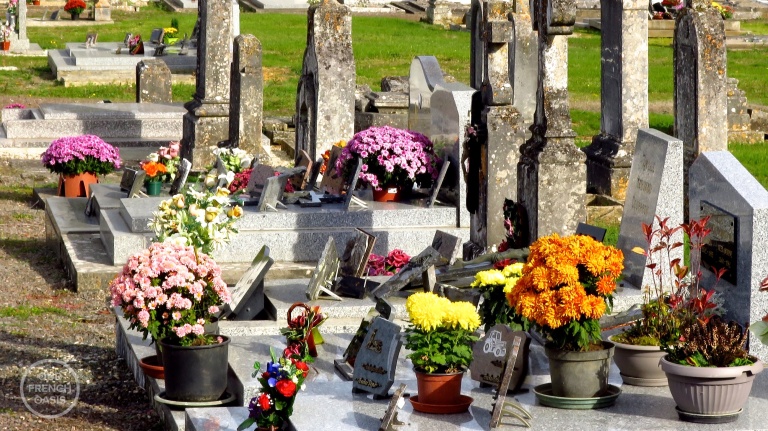 It is also the Vacances de la Toussaint for the children,  which is the mid-autumn two week break from school – always highly anticipated, and perhaps for some a matter not unrelated to the amount of sweets and treats that may or may not be in the offing come Halloween itself!

This year we spent several days of the first week of the holiday in Bordeaux. This is the city that really does have everything, from fabulous architecture and fine dining, to magnificent strolls along the banks of the river Garonne.

Top-end shops gravitate around the Triangle d’Or and unsurprisingly, and perhaps unerringly, we found ourselves early on Day 1 pushing open the door to Starbucks; I know we shouldn’t have, for the French make fabulous coffee, but the smell of cappuccinos, frappuccinos, mochas and other delights was an olfactory treat to the senses, a warm sensual return to memories of places we have not visited for many years. Indeed, the words on the menu were creations of vowels we had not really uttered for a long time, and even though the spelling of our names on the cups was somewhat hilarious, I cannot deny the taste was good!

It was so good we went back for a second helping on Day 2, when I admit my guilt lasted only as long as the first delicious long sip. 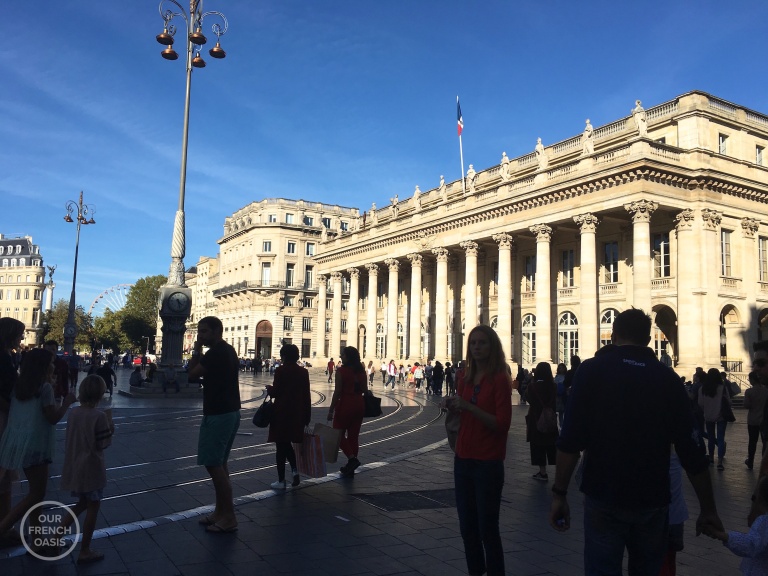 There is also a vibrant café scene on every street and amongst all of it is the world’s biggest wine museum, a sensuous reminder that the whole city really does ooze  elegance.

It was the most perfect weather to sit outside and watch the world go by. 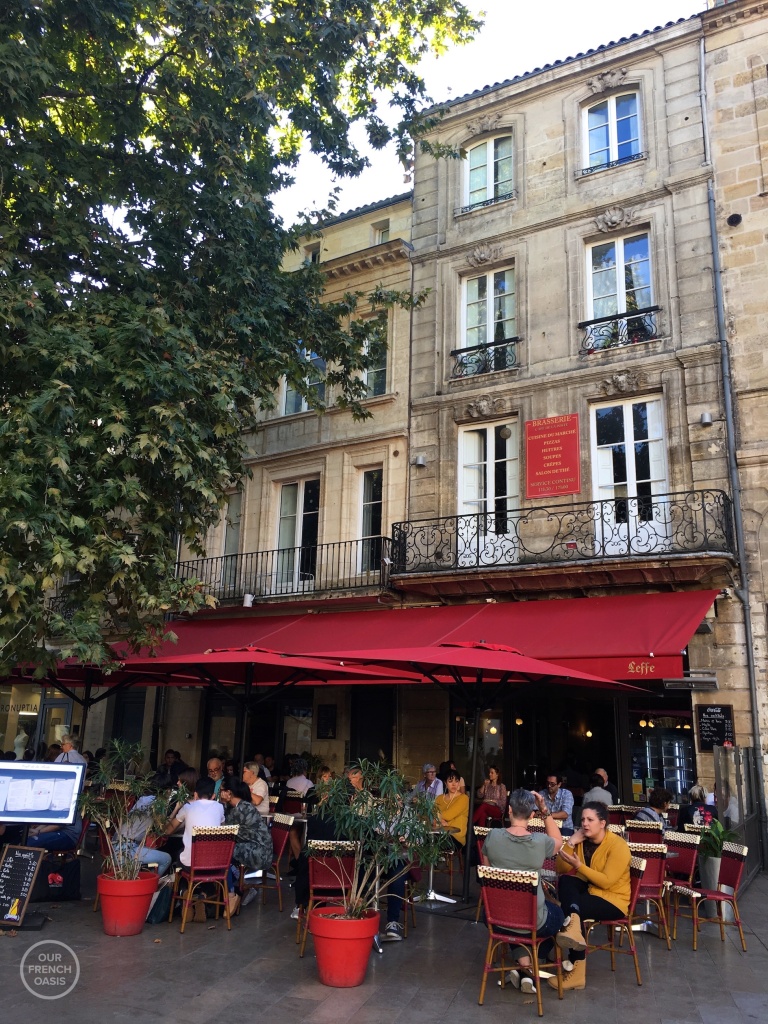 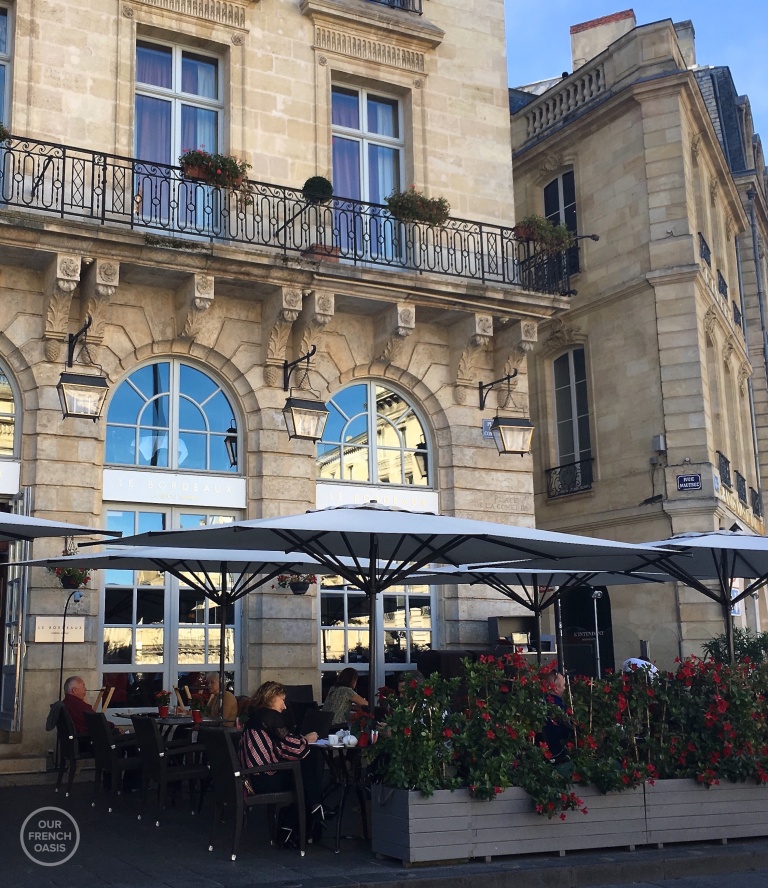 It is difficult to not notice the architecture in most French cities, and Bordeaux is no exception. From its grand train station to the corner apartments at the end of each boulevard, the city states its importance in quiet authoritative grandeur. 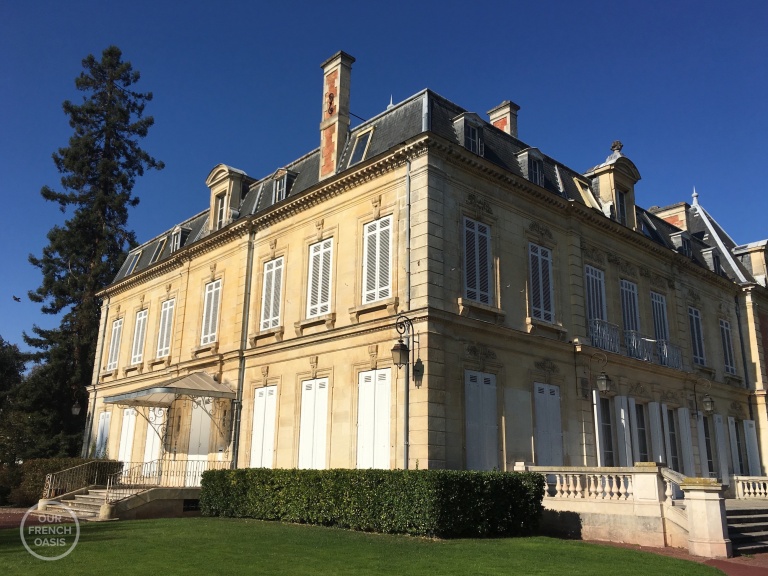 Closer to home, one is reminded of the stark contrasts between city life,  and country life. We could almost be in two different eras, but perhaps this is what the true meaning of the ‘best of both worlds’ is…. 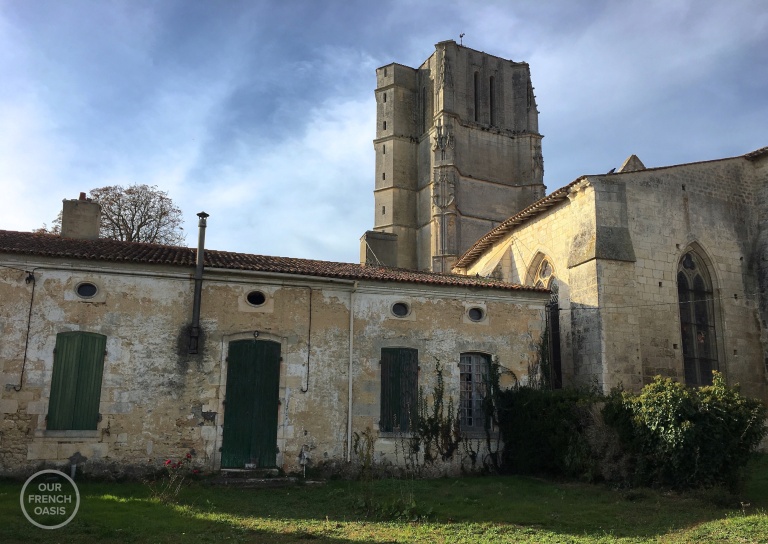 Some parts of the old priest’s house attached to this church, for example, truly reflect the simplicity and devotion to the calling that must be endured. I wonder quietly if a few small panels of plywood might not keep the warmer air inside, where it will shortly be most needed?

Autumn may be in full swing but in every village there are some flowers which can still be found in abundance, complete with bees making the best of the cooling weather where possible – Roddy’s gentle insistent insect-coaching may be starting to pay off, perhaps….or have I always noticed the bees quite so readily?

In one small village we unbelievably found some hollyhocks still nodding in the autumn breeze…. 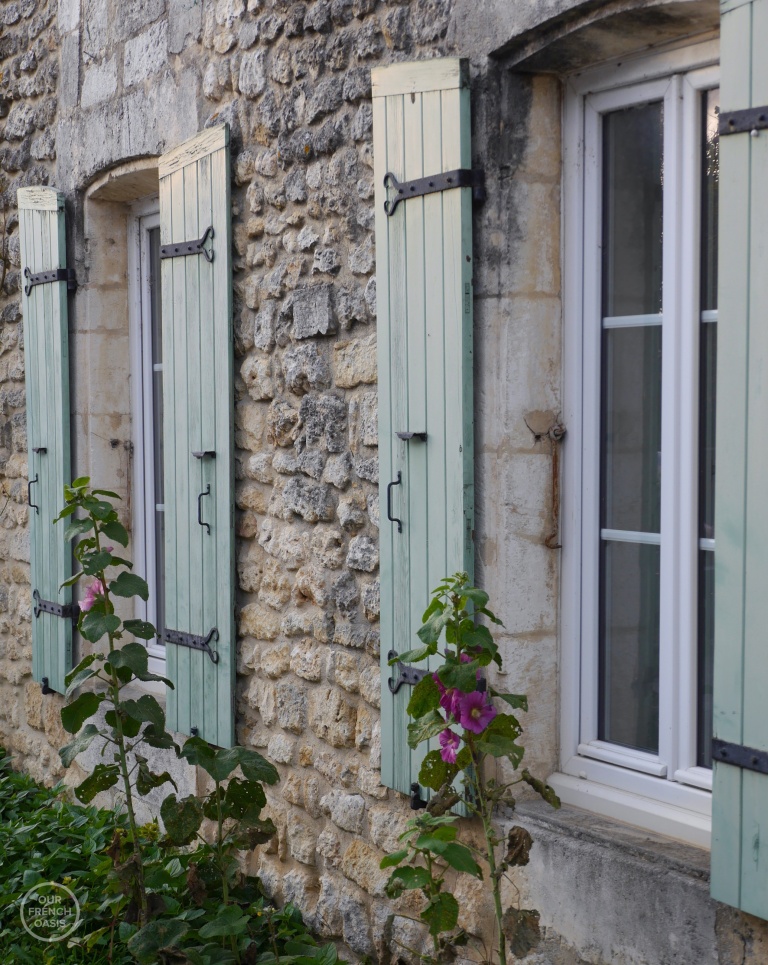 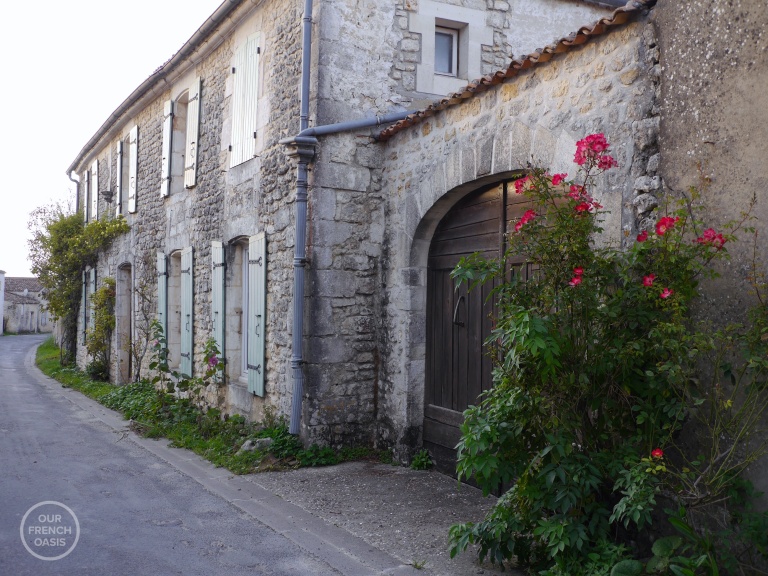 I passed this mass of cosmos, a meadow of colour far too large for an owner to diligently deadhead, and thought, with a tinge of envy, what a fabulous cutting garden; our house would be a riot of colour with vases filled haphazardly in every room if this field was mine – this is the sort of flower I am convinced should be left to spill out of containers in the most natural way possible. 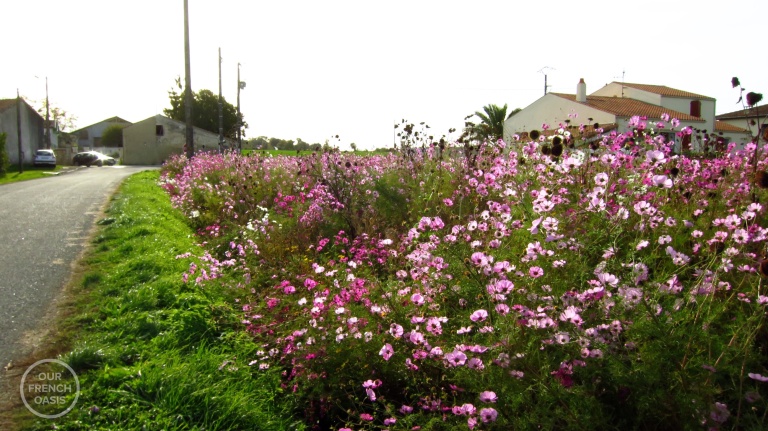 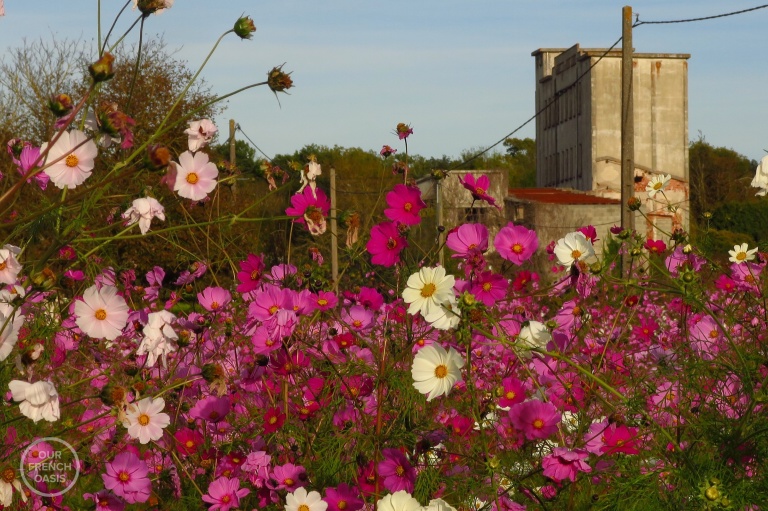 Inspired, I returned home determined to find something to fill a container from my own turf. A quick scavenge through a darkening garden and I managed to salvage an odd assortment of blooms, including some roses which are in bud, once more! I know I could just as easily buy a bunch in a shop for the kitchen table but it wouldn’t be the same somehow; there is a special feeling when I know the blooms on the table have come from our own garden. 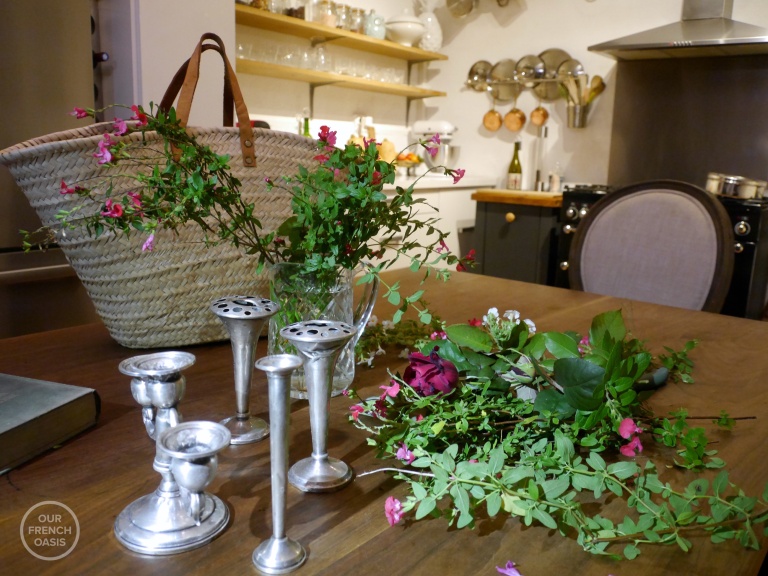 And getting back to autumn, we have wood lined up in the log-pile, and our chimneys are all swept; even though the days are warm, the nights are drawing in. I understand this for a fact since Roddy now wears a jacket down to the chicken house at night, and although he is still(!) in shorts by day I know the writing is on the wall. It got chilly enough some nights ago that we lit the fire in the kitchen for the first time; perhaps a little later than usual, but then autumn has been a most strange season this year. Sunday morning was also chilly and when the house came down to breakfast I found Roddy had already lit the stove and Evie was quietly back in her winter wood-burning mode.

In some places leaves are only just starting to turn,

while in others they have already fallen, leaving trees outlined with bunches of mistletoe, clinging in great clumps to the branches. There seems to have been very little ‘in-between’ time this autumn, and much to our great surprise we have found our persimmon tree is already bald and some of the fruit is almost ripe enough for eating, a good three weeks or so before we usually start to think of it. In complete contrast, Roddy reports dragonflies still mating on the pond, and many spiders still active in the garden, at a time when they should be all tucked away in hibernation, or dead of winter chill.

Pumpkin and squash, those gourds we talked about before are still freely available in the stores and butter-nut soup has become a twice-weekly feature on our menu….

…. and to coincidentally complete our little mid-autumn break, we found a fabulous supplier in a nearby village. Obviously blessed with a stock of surplus produce from his potager, this green-fingered grower sells them from his house beside the road, proudly displayed in a wheelbarrow. 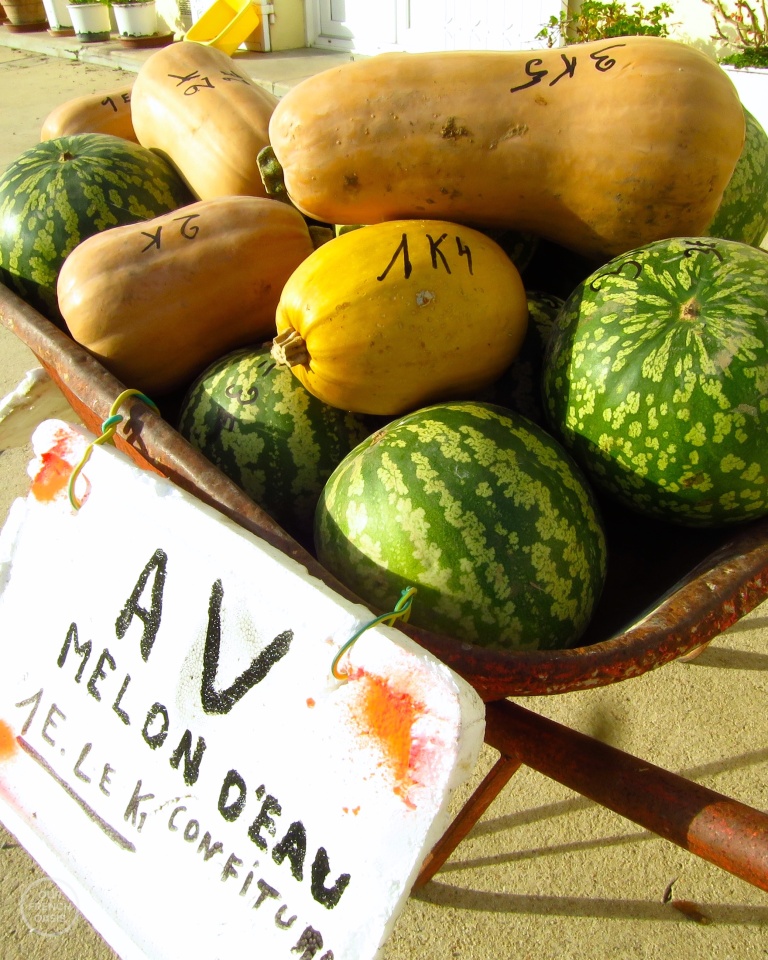 One draws up in a car, and he appears almost instantly like a magician, to dispense advice, offer a recipe or two, or even to comment on the weather, the passing cars, the amount of tourists still driving through the village and his thoughts on winter ahead; it appears we may need more firewood, “it’s going to be a cold one”  so he says.

Next year we have already vowed to grow our own butternut, an item of golden goodness that has thus far been lacking from our vegetable garden, probably in place of the watermelons. But then if we had already grown them, I’d never have stopped by the wheelbarrow and met yet another of the charming people we have come across in this area we now call home.

We may go back tomorrow for a pumpkin. I have an urge to make pumpkin soup next, or watermelon jam “melon d’eau confiture” as the sign suggests,  I have never heard of it or tried it – thoughts anyone?

It’s scorching outside and the cool tones of our kitchen are a welcome respite from the heat. . Everything at this end of the kitchen (except for the range) is either vintage or has been repurposed. The old butchers block was in a dreadful state when we bought it and it had no base. We made the door from an old table! . On the right is a freestanding unit we made. The top is a piece of marble that once started life as someone’s coffee table! The old wine box stores all the little things that are needed for cooking. Tea towels are kept in the drawer. Throw in some vintage stone kitchen ware and we love the result. A warm, welcoming hard working family kitchen! 💗 . . #frenchfarmhouse #ourfrenchoasis #myfrenchcountryhome #ourfrenchlifestyle #myhomeismyhaven #frenchliving #frenchvintage #frenchstyle #countryliving #farmhousekitchen #frenchcountry #fadingbeauty #maisonsdecampagne #frenchkitchen #myconsideredhome @victoriamagazine
Just love cycling around our village. Feeling super lucky to live where we do, see my story for a short video whilst I was out cycling today 🌱💗 . . #frenchproperty #frenchfarmhouse #frenchvillage #ourfrenchoasis #frenchproperty #myfrenchcountryhome #ourfrenchlifestyle #myhomeismyhaven #frenchliving #frenchvintage #frenchstyle #frenchcountry #fadingbeauty #maisonsdecampagne #charentemaritime
The potting shed in spring. Everything moves to the door for a good mixture of light and shade. For a few more weeks this will be where I experiment with cuttings, currently lavender, rose and salvia. Then come July it becomes the summer kitchen. A truly multi functional space! . #frenchfarmhouse #ourfrenchoasis #myfrenchcountryhome #ourfrenchlifestyle #myhomeismyhaven #frenchliving #frenchvintage #frenchstyle #countryliving #pottingshed #frenchcountry #fadingbeauty #maisonsdecampagne #frenchgarden #myconsideredhome @victoriamagazine
If you are looking for that dream property in France now is a good time to start getting into action. The property market is opening up again. We specialize in finding the perfect match for your requirements (town or country, cottage or chateau) and are based in the Charente Maritime. If you’re a little stuck and need some guidance get in touch, we’d love to help you. . . #frenchproperty #frenchfarmhouse #frenchvillage #ourfrenchoasis #frenchproperty #myfrenchcountryhome #ourfrenchlifestyle #myhomeismyhaven #frenchliving #frenchvintage #frenchstyle #frenchcountry #fadingbeauty #maisonsdecampagne #charentemaritime
Just a few shots from around the garden this evening. . . #frenchgarden #frenchfarmhouse #ourfrenchoasis #myfrenchcountryhome #ourfrenchlifestyle #myhomeismyhaven #frenchliving #frenchvintage #frenchstyle #frenchcountry #fadingbeauty #maisonsdecampagne #frenchgarden #calmingcontent #springgarden #springinfrance #myconsideredhome #lazydays #frenchsummer
A quick tour of the potager. When we bought the house there was no vegetable garden. Just a line of grapevines and a few roses in amongst the lawn and a wall totally obscured by ivy! . Using old stone we found in the garden we made the beds, kept the roses and used the grapevines as a natural divide between the lawn and the potager. Over the years we’ve cleared the ivy, this year making another new bed under the wall for melons, cucumbers and aubergines. . It’s like being in another world down here. The wall shelters us from any cold easterly winds, the only sounds are from the chickens. Hard to imagine we live in the middle of the village. It’s been hard work but worth every second. . . #potager #frenchgarden #livingfrance #frenchcountrylife #simplelifestyle #livingofftheland #ourfrenchoasis #ourfrenchlifestyle #vegetablegarden #walledkitchengarden #simplelifestyle #slowliving #realfood #thegoodlife #potager #myfrenchcountryhome