“About twenty minutes maximum, and we’ve still got another 6 or 7kms to go!”

You would think we would have learnt by now; this is our third summer of occasional day-trips cycling on the Île de Ré and we always end up in the same situation at the end of the day when closing time draws near and we somehow find we are a very long way from the bike hire shop. It’s a recurring theme that only extreme muscle power is going to get us back anywhere near on time. 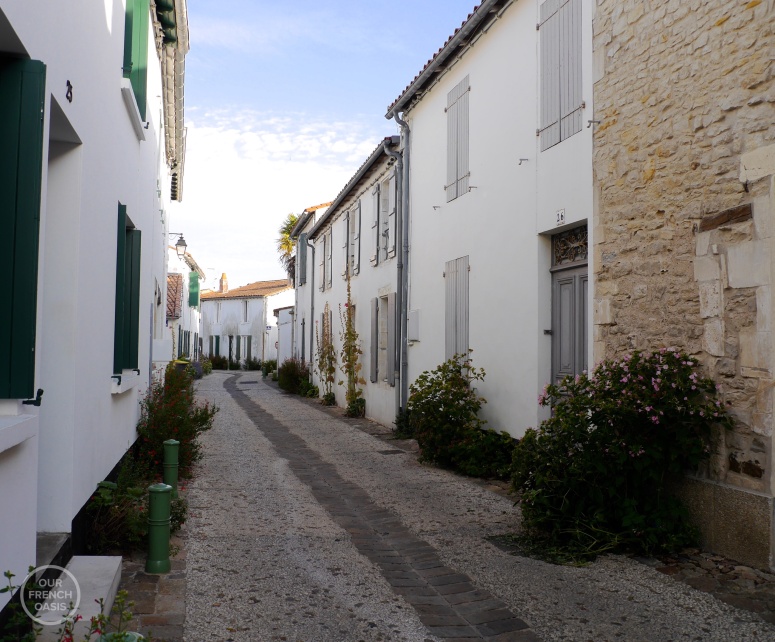 Let’s go back to yesterday morning. We had the perfect trip planned and this time it was not just our family but also some friends who were joining us;  our total number had swelled to twelve and I knew turning up at a rental shop and asking for wheels for this many would be a great deal harder to fulfil than merely wanting to rent a couple of bikes. I thought I’d be clever and do the sensible thing by making an online reservation the night before. Something didn’t seem quite right, however, for although I received a confirmation email within minutes I hadn’t even been asked for a debit card to secure the booking. In fact the more I thought about it the more I was unsure, so I even phoned the shop and left a message on voicemail asking them to confirm the rental. That would do the trick, I thought, and slept soundly.

The next morning we set off on time (which in itself is something of a miracle!) and with little traffic over the bridge to the island we arrived early, an even more astonishing feat for our family. Alas, it was then that we found my niggling feeling had been correct; the shop had received the booking but we couldn’t get any bikes until the evening. This was certainly not what we had planned! So we headed off to search for some pedal power, which shouldn’t have been difficult as bike-rental shops are nineteen to the dozen on the island.

But of course this was august on the Île de Ré and there are more tourists than bikes some of the time. Plus we had the slight problem of lots of traffic, narrow winding lanes and two cars trying to follow one another; needless to say we got separated which merely added to the confusion. Overriding all of this was the additional pressure of time as we were fast approaching midday, and of course in France everything closes for lunch at noon. If we had found nothing before then we would be at a loss until everything reopened at 2pm.

I led the way in my car and at the first shop we stopped at we drew a blank; some furious navigating on Google followed and then we found another, right at the end of a tiny dead-end street. Unable to park, I sent the teenagers off to run and ask if there was anything available and they quickly returned with a thumbs up. Leaving them to organise bikes, Gigi and I headed off to try and find somewhere to leave the car, whilst phoning Roddy who was in vehicle number two with the friends to advise them we were in luck and to try and let them know where we were. They’d just found a shop as well and were in the throes of booking bikes for all of us there! Silently they sidled out of their shop and headed in our direction, which in itself was somewhat confusing as in truth I hadn’t got a clue where we were after finally parking on a tiny residential street a good kilometre’s hike from the hire shop.

With some degree of good fortune we all finally gathered to collect our trusty steeds within the space of ten minutes or so, some rather out of breath, and with a bemused look the assistant, who was a very good sport, kitted us out with our new rides for the day and we set off in the direction of the island’s capital, St Martin de Ré.

Passing through the centre of the town a little later we headed out to the old fort on the far side where we found a quiet spot where we could enjoy the picnic that we had hastily prepared at home and pondered the question, “Why do donkeys on the Île de Ré wear pyjamas?”

The sun had been incredibly timid all morning, preferring to remain well and truly out of sight, but as we sat down it decided to come out of hiding and with lightning speed sent the clouds scurrying off in shame. Within a very short time the skies were once again clear blue, and the summer heat was perfect, neither too fierce nor too weak. With a gentle onshore breeze fanning us, it was going to indeed be a perfect day for a cycle.

It was as we were eating our sandwiches that one of the party casually pointed out over the ramparts overlooking the bay and pointed to a small village at the far end of the island and jovially said, “Let’s have ice-creams for dessert over there.” A local friend who had also joined us on his bike commented that the church spire we could see was in Ars -en-Ré, about 17 kms away. We all thought out loud, “That’s not really too far, we’ve already come 4kms in no time, yes, let’s go there….” and so we rallied our large group into action and set off once again. 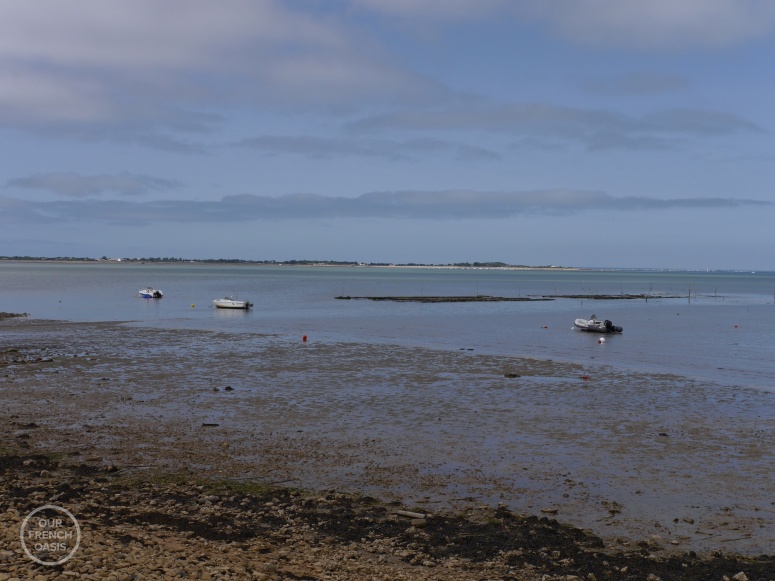 The route was not without its fair share of mishaps; trying to keep 12 cyclists all together on busy cycle-tracks is quite a demanding task, especially when one member of the team had had the brilliant idea of hiring an adult tricycle complete with carrying box on the back for all of our belongings. At the time it really did seem such a good plan, but we soon realised what a burden it was, the mechanical beast was impossible to steer, hated going around tight corners, sat nose to the wind like a barge and it had a terrible tendency to veer off the road when the camber sloped towards the verge. However, I always look on the bright side and every near miss, meant a break for everyone, I could stop and take some photos along the way! 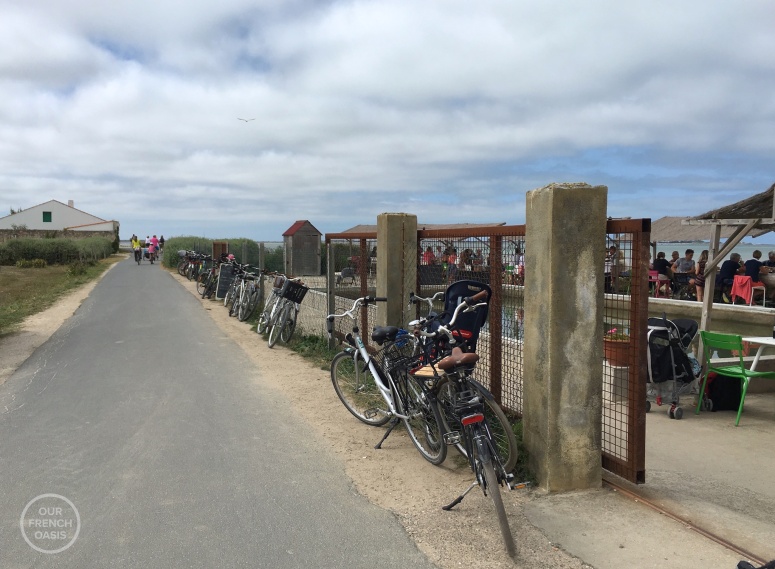 But eventually we did make it to Ars-en-Ré with its famous church with the black and white spire.

The ice creams were duly purchased, devoured and enjoyed; they were certainly very well earned. We walked around a little on the quay, found a wall to sit on where we watched the comings and goings, gawped at the other tourists, who – very much like ourselves – were making the most of the island. 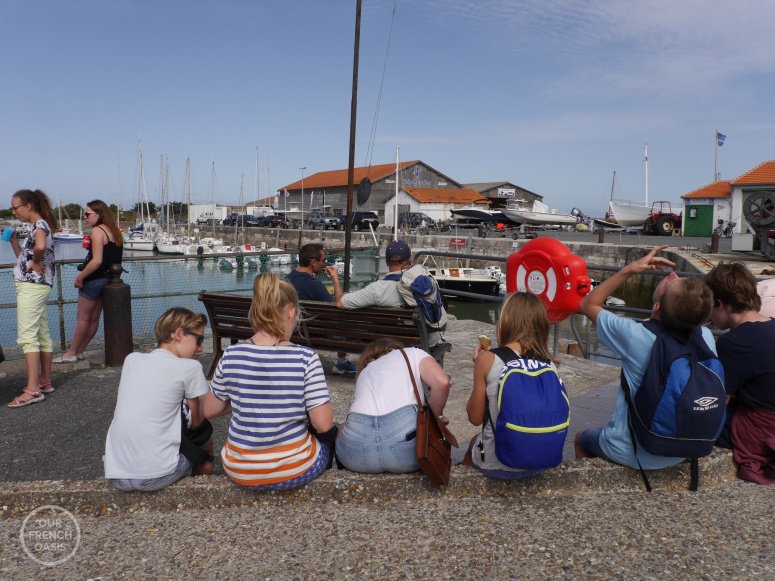 Our bikes safely tethered to railings we wandered the narrow streets and admired the quaint shops. 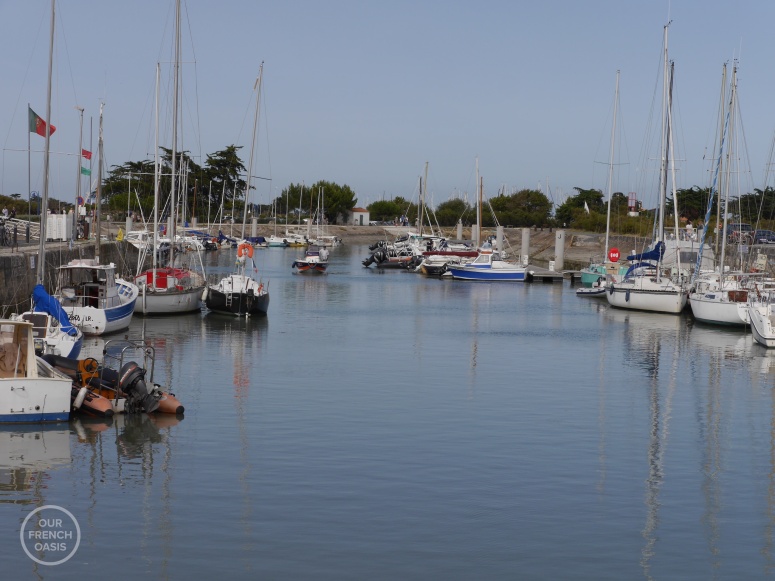 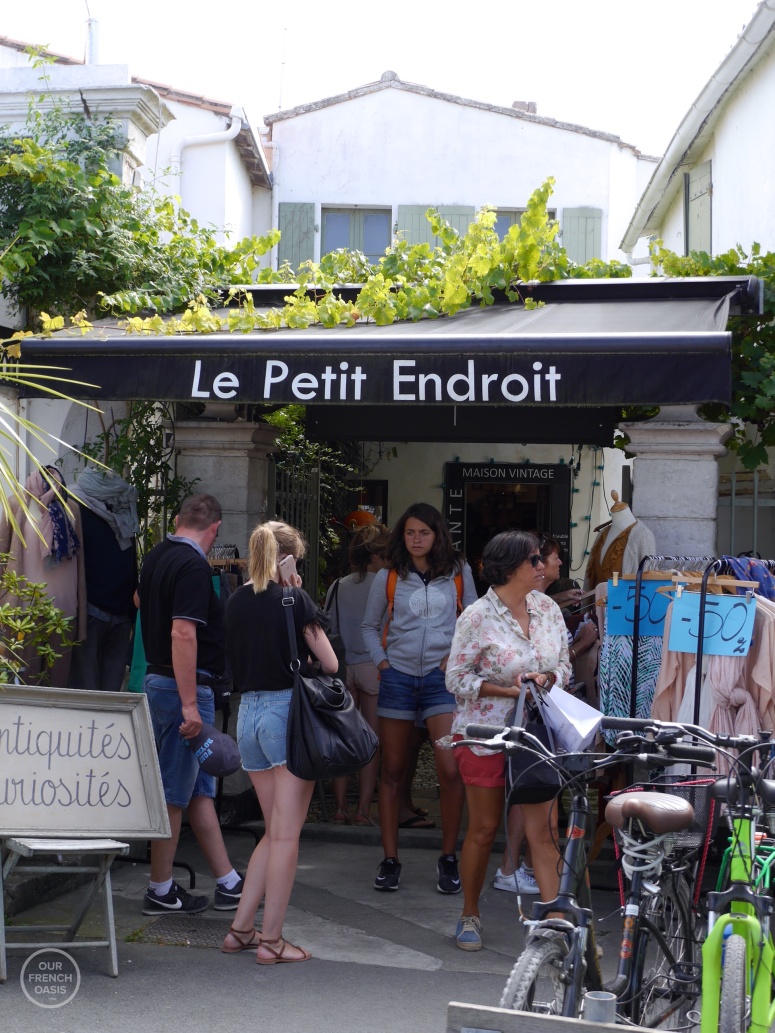 At some stage we decided it was time to start the long trek back from whence we had just come and yet again we formed an orderly line and started pedalling, only this time we were also clock-watching, acutely aware that the bikes had to be returned by 7pm when the shop would be closing. We were doing well and making good time, and somehow we managed to stay almost together. The dreaded beast of a tricycle was shared amongst a succession of brave riders, each shift bringing with it a tale of woe and near accidents. These included a near submergence into a salt pond, a rather sharp diversion into a row of vines and a close brush with death for an old lady who was doing nothing more than cycling on the correct side of the road. Roddy kept muttering the beast was possessed and should be exorcised. As we settled into our stride I became more daring, snapping away with my iPhone as the route took us through vineyards and along the coast (there was no time to stop). 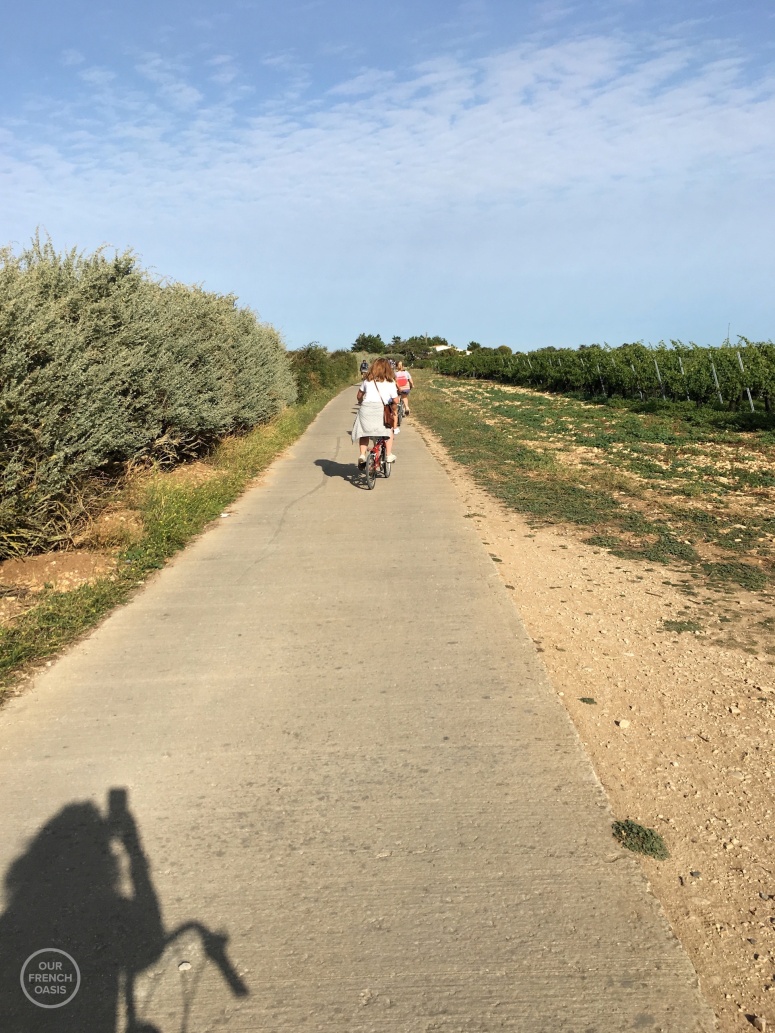 But then we hit the capital, St Martin de Ré. If we had found it crowded earlier at lunchtime, it was nothing compared to how it was now at the time of the evening’s l’heure d’apéro. It seemed as if every person on the island was milling around the capital. Riding a bike was totally out of the question and so we walked, carefully pushing our bikes through the crowd, not as easy as it sounds with the large three wheeled beast. But yet again it gave me time to take photos as we moved slowly along, in fact I became quite adept at taking one handed snaps whilst steering or manhandling a bike with the other! 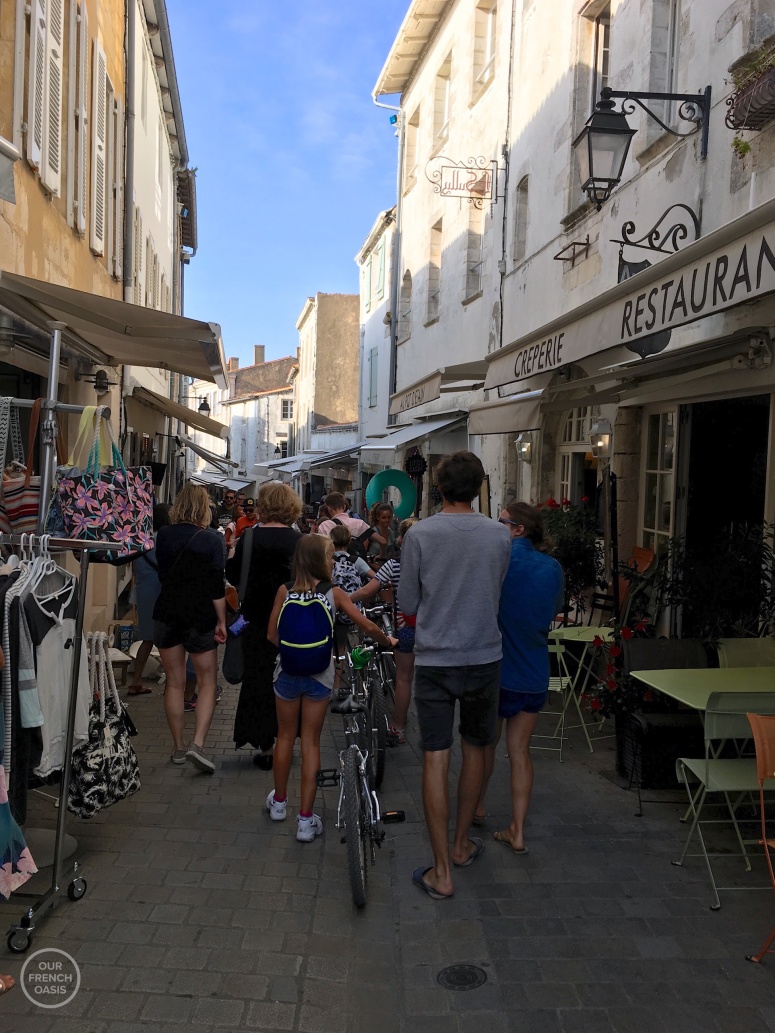 Soon our group became separated as we ploughed on through the throng of people, all good natured, all ambling slowly, in no hurry, just seeing where the evening would take them. 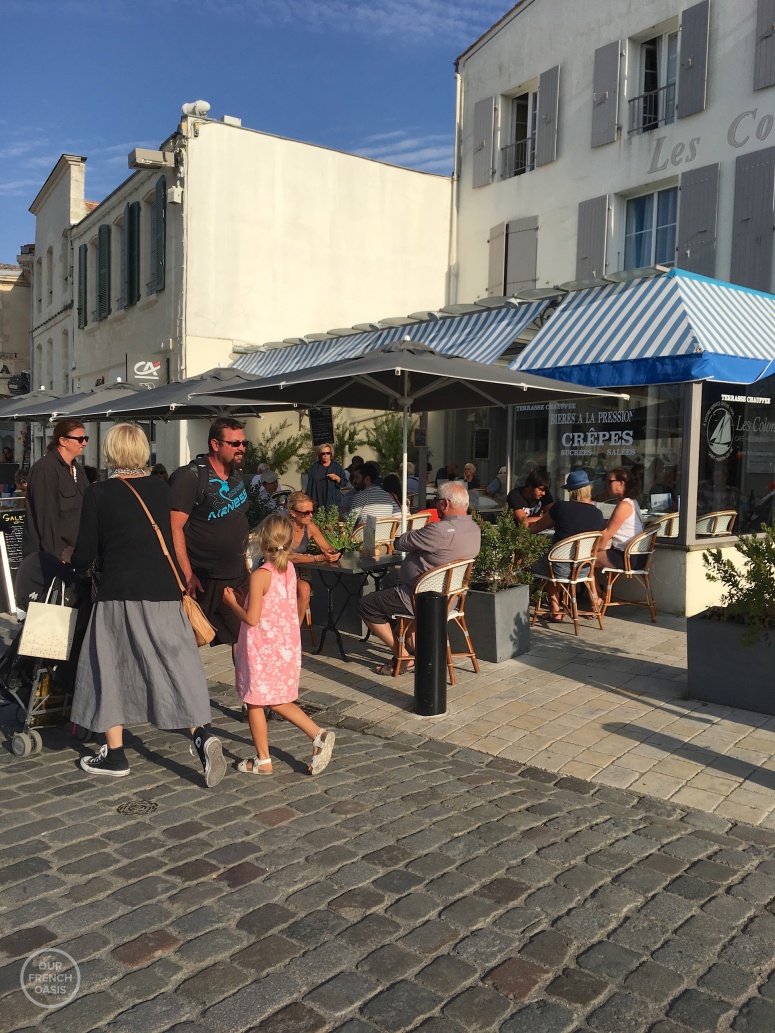 That was all except for us, of course, as we were in a huge rush and had just five minutes to cover 4kms back to the shop still. At this moment it became apparent that we had no idea where half of our party was. Strung out along the crowded little streets it had been inevitable that we would suffer some losses. Emerging at the end of the town a while later, we phoned Millie with more than a little concern;  I knew she was ahead of us with the first group. I knew everyone would be safe, we had no worries on that level at all, I just wondered how on earth we would find those that did not have phones! Thankfully she did have a phone and she heard it over the hubbub and after answering, did a quick head count. All were present, we hadn’t lost any of our youngest children and so they waited until we were all reunited, and after a quick chat we made a final dash for the rental shop in an attempt to be there on time.

It was in vain – we didn’t make it, and arrived seven minutes late to find it was closed. But a telephone call and a huge apology sorted things out. The manager returned after he realised we were not staying on the island, we handed back our tired steeds and the dreaded beast which Roddy gave a departing kick to as he manhandled it into the shop. After that we slowly wandered back to our two cars, a final kilometre of gentle exercise for fatigued bodies, but a feast for the eyes as we walked down impossibly pretty, tiny lanes . 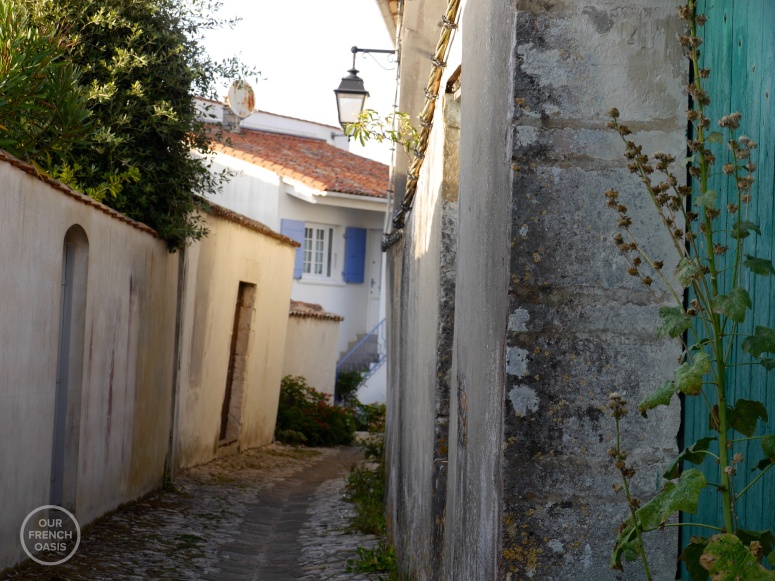 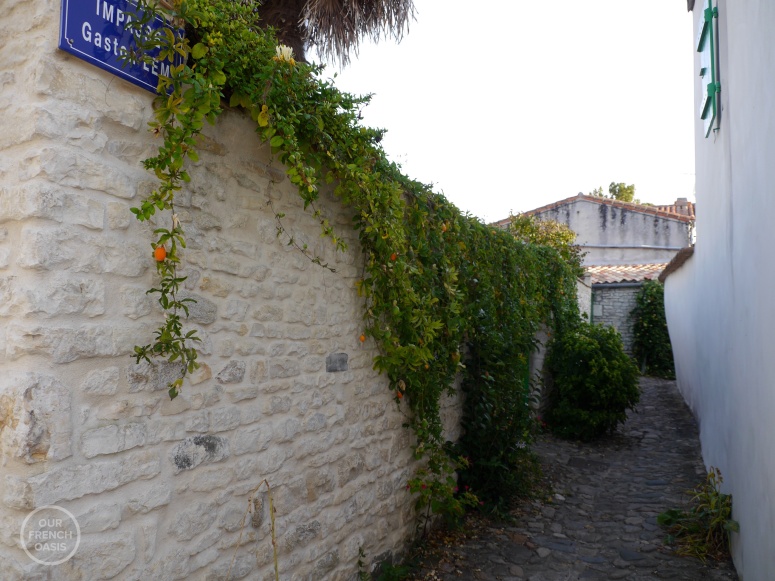 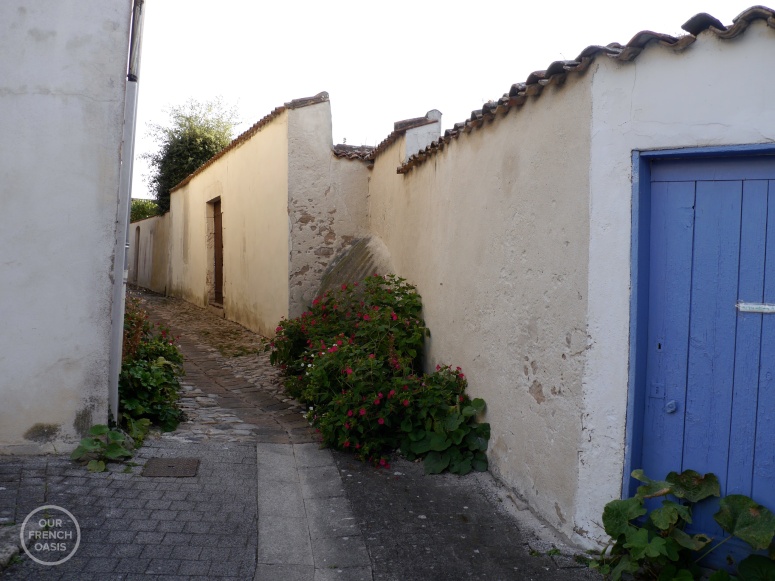 We all had various aches, whether it was backs, butts or legs – everyone had a some part of their body that they knew was going to be stiff in the morning! We hadn’t planned on cycling just over 40kms when we set out that morning, it all sort of just happened, but sometimes I think that’s the best type of day, one that takes you totally by surprise.

We returned home in gathering darkness, a glowing sunset to the west creating a shroud of golden light on the road and as we ate an adventurers’ supper around the kitchen table, we swapped the stories of our day as we did so, the children still chatting excitedly. To say we all slept like logs may be an understatement!