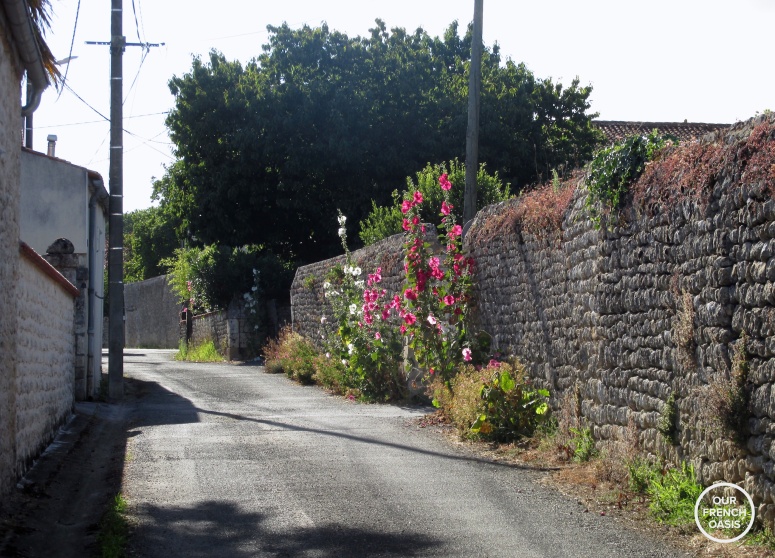 Walking down the hot dusty street, time passes slowly and for most of the day not a soul can be seen. But at certain times the village comes to life; first thing in the morning when the children arrive at school, and again when they leave in the afternoon. That’s when the pavements bustle with life, and excited gaggles of small people skip back and forth haphazardly on pavements. There’s also a cluster of activity around the boulangerie just before midday when each household chooses a victim to pop in and collect baguettes for lunch. This little spurt of movement happens again around 7pm, as the afternoon sun fades away into the welcome cool of the evening. 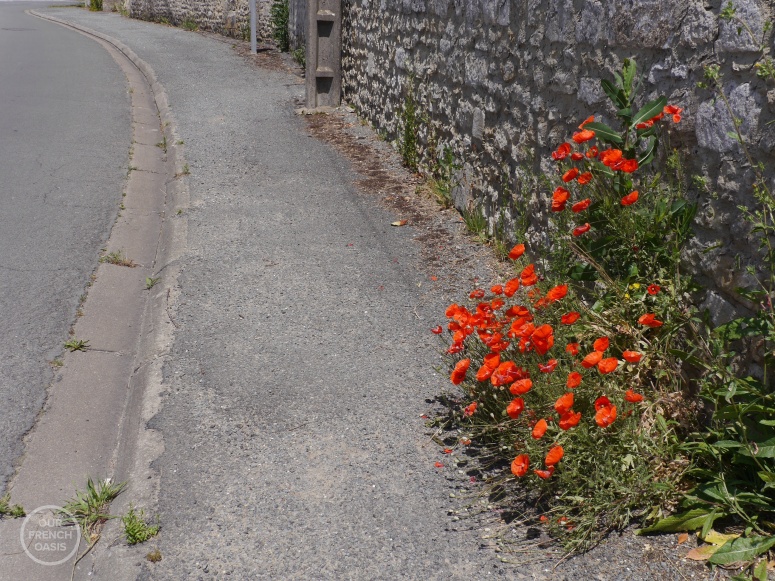 Other than that the village is calm for most of the day – except for the cars that pass through, always too fast, everything in a race against time, late for lunch, late for work, late for love, always late for something and always at the same busy times, the start of the working day, the end of the working day and lunchtime! Speeding chicanes do nothing to slow the outside traffic down; if anything the obstacles just provide a game, a chance to swerve through them at pace, a challenge for talentless speedsters who continue through the village, far too fast.  If only the speed-cameras would come here instead of the main roads; they’d rack up hundreds – no thousands – of euros in a day and our village life would be that much better for it. And then we’d be just left with the tractors that make the hideous racket, their giant wheels clanking over the uneven old road surface, causing every bit of metal on their huge frames to rattle as loudly as it can, be it a chain or some other mechanical part of farm machinery, made for honest toil on soil, and not for defeating plastic chicanes on the tarmac. I can’t dislike the heavy machinery though, as a farmer’s daughter I know it travels the length and breadth of the parish to reach fields everywhere and without it the countryside would not be the same.

Step in through our gates, though, and one immediately enters another world, a garden that sold my husband the property the instant he arrived. He wasn’t bothered about the house, nor the fact that it needed endless work to bring it into the 21st Century; that was all cosmetic as far as he was concerned, things that could all be altered or fixed. But the trees, some nudging 500 years old, they could not be bought, and it was the green cathedral spaces that clinched the deal.

And the moment I set foot inside the gates for the first time I was equally spellbound, a feeling that is still the same today, years later. The driveway comes into its own in the spring, when the scent of honeysuckle fills the air with perfume and the Russian sage tangles its way through the old, original, wrought iron gates, long since abandoned but still in situ. We have to be tough when cutting everything back in the winter or we would be in danger of losing the drive altogether. 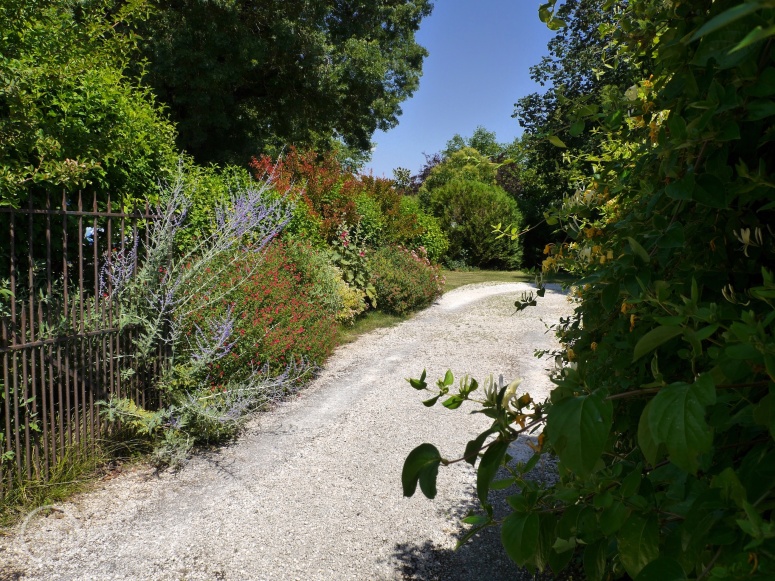 Our garden will never be perfect, it is too big for manicured perfection without a full-time gardener, so instead the best I can hope for is ‘enchanting’, with archways and secret places.

The garden was planted eons ago, long before any of us were born; it has evolved quite naturally but in recent years before we came here it had fallen into decline. Slowly we have been reviving it, adding our own little touches here and there and breathing new life into this acre and a half of ‘green’ tucked in between its neighbours. 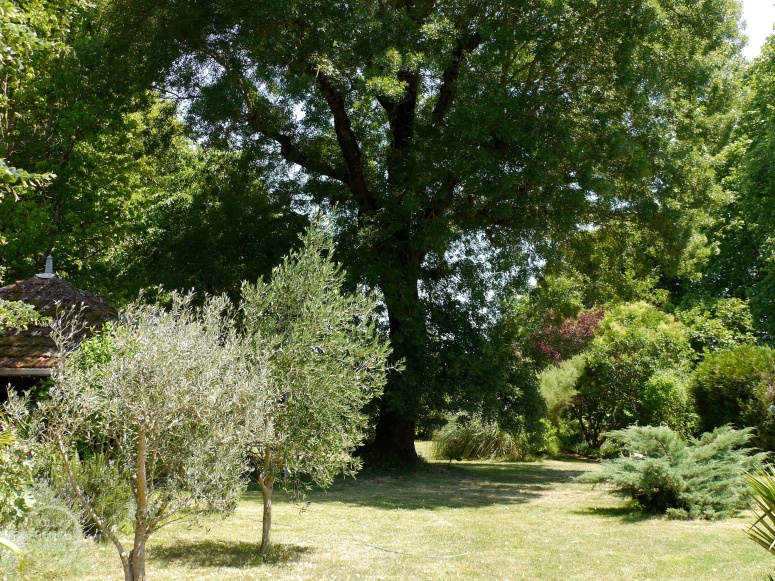 I wanted to create a space where anyone who visits feels instantly calm, a garden where as one ventures deeper into it, away from the road, the more the stress of everyday life slowly slips away. I wanted this garden to take on an almost fairytale existence, a magical world where plants and insects and bees live in harmony.

I believe it was originally quite formal, which is often the way with French gardens, but we have purposefully softened the edges, allowing plants to tumble over the cobbled path, and to tangle themselves over fences. We’ve really just tidied up the once severely clipped shapes which – by the time we bought the house – were totally overgrown. Now I think we’ve allowed them to be far more natural, and much more soothing to the eye. 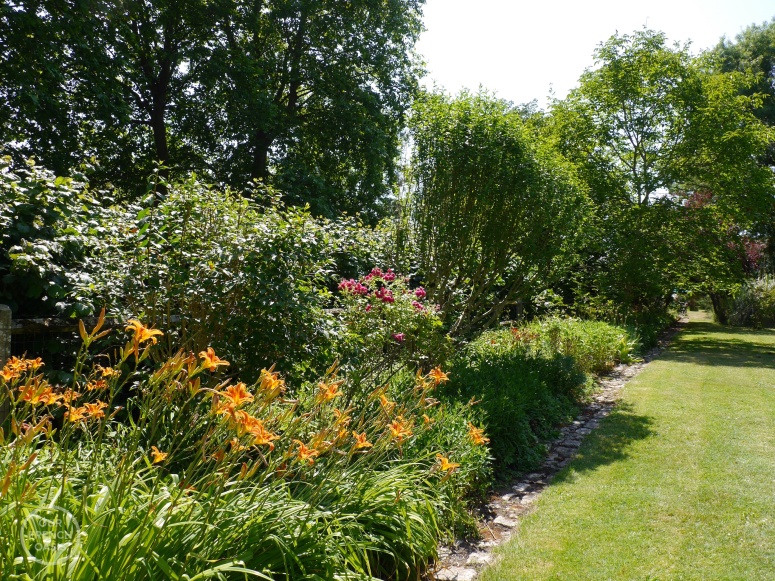 The long border – which I have talked about before –  I had almost given up on; it was a dry, shady space, hidden from the sun behind the over-grown hazel and cob hedge. It seemed a hopeless case, pretty in the spring when the hedge was still not fully leafed, but by summer lacking any form of colour, nothing thrived and everything growing there struggled. This was until we cut back the hedge last winter, ruthlessly and a little nervously reducing it by two thirds, levelling it to a height where the border has been completely transformed with the influx of new light. The day-lilies which hated the shade have emerged everywhere for the first time in years. Although their flowers fade so quickly, the plant can actually bloom for weeks, sometimes even months, because as one flower fades, the next one on the stalk, known as the scape, opens. 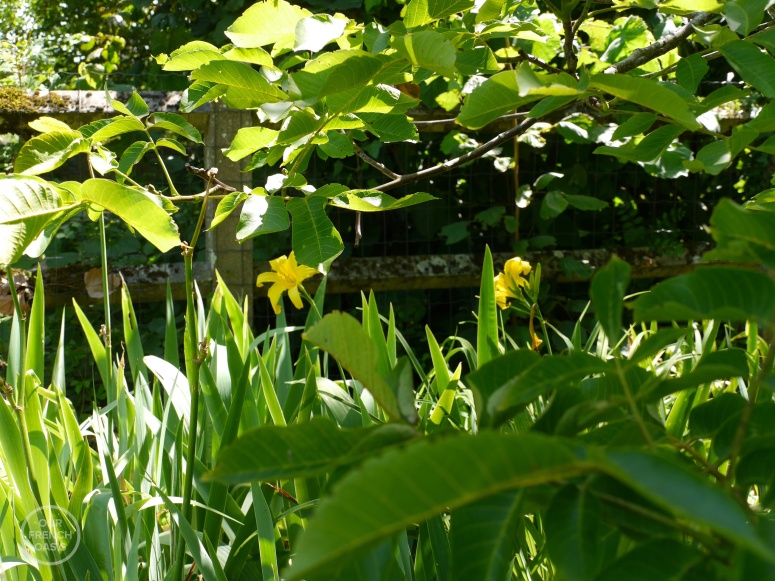 This is a busy garden with many roles to fill. On any summer weekend the birdsong will always be in competition with shrieks and splashes from the pool and various garden games. And as in any family, it won’t all be tuneful peels of laughter; there are always some heated exchanges and a few cross words, when siblings get mad at one another as one bends the rules or doesn’t play in quite the same way as the other had in mind! But fortunately for us, and the other inhabitants of the garden, squabbles rarely last more than a few seconds! 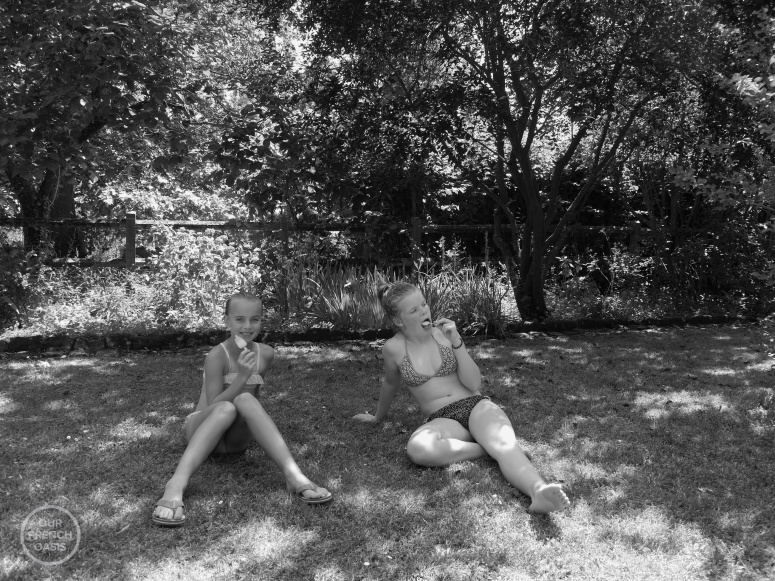 Somehow effervescent human-life and the tranquility of plant-life exist side by side, even if the grass takes a permanent beating, not just from the sun which shrivels it to brown before our eyes each summer, but from the constant criss-crossing of feet, pounding the earth as they run, hop and skip.

The flowers and plants are not immune either; they never quite know when they are in for a surprise direct hit from a football, or a frisbee, or a hula-hoop (there’s one currently stuck in the persimmon tree waiting for someone to find a way to get it down) or when a dog or cat is going to stretch out languorously in the sun across stems, leaves and blooms, leaving a decidedly notable dip in the green world when they leave. 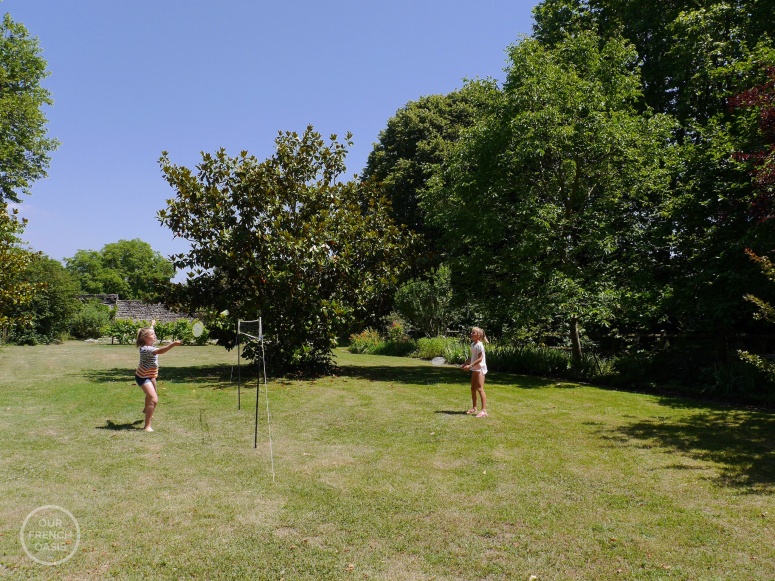 The chicken garden on the south-eastern side is perhaps the quietest and most peaceful place here, and we’ve purposefully left it a little untamed so the chickens can go back to their jungle-fowl roots when they desire and eat ticks and scratch up grubs. Beware the mouse or snake who finds itself out in the open here. Our feathered girls know no mercy when it comes to victuals. 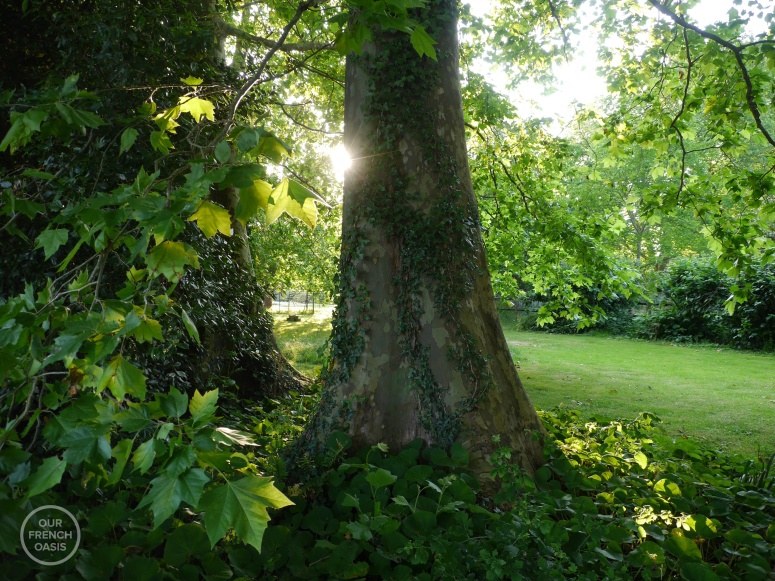 One side of the chicken’s world is bordered by the hazel hedge,which is separated from the long herbaceous border by the old original fencing which runs the entire length down the middle.

Down here, deep in utopian greenery and colour, away from the pool noise and the thump of vehicles beyond our gate, I can lose myself completely. It’s a far from manicured space that I gaze out on from the kitchen window, but somehow it’s the sort of place where dreams are made.

One of the disadvantages of having some natural nirvana in the garden is that I am always in danger of forgetting time if I venture out to pick some fruit or a lettuce for lunch. I admit to finding myself easily sidetracked; a new bud will grab my attention, then I’ll spy a rather large weed that I ought to remove, and then some plastic detritus from last night’s games will need picking up (for no matter how many times we repeat the mantra “you can play with whatever you want, but put things away afterwards” it always seems to fall on deaf ears). In addition there will always be some badminton rackets tossed aside with careless abandon, bows and arrows from a round of archery, and a stray flip flop found by Evie. One that has been guiltily carried across the lawn to a quiet corner by our canine thief, she’s long past the chewing stage but she still loves to hide things and we go through flip-flops at an alarming rate, if they are not rescued quickly they will be lost deep in a shrub. We have many half pairs, and they’re all quite useless!

Over the years we’ve changed things. We’ve added water and the pond has become one of our favourite places to stop and stand and stare. It is teeming with aquatic life, frogs who like to sunbathe, newts, toads, water nymphs and fire slamanders, they all have made their homes here.

In the small courtyard garden we added a tiny water basin, an old cast iron tub we found at a brocante. 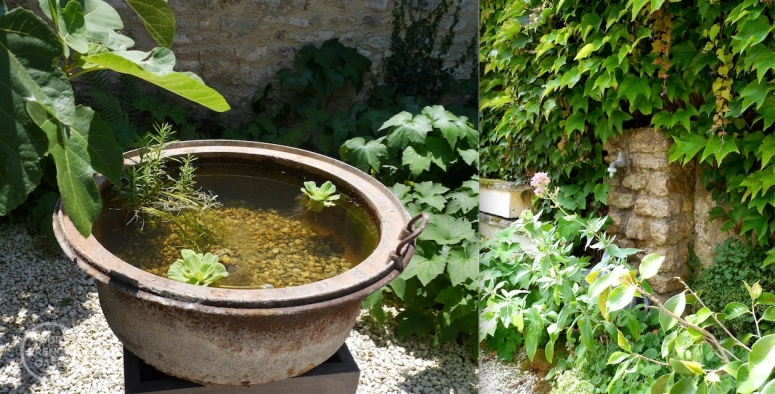 roses and Virginia creeper vie for vertical space beside the house, whilst valerian and mirabilis fill the lower half.

The very first of the hibiscus have just come into bloom.

The cherries are long since gone, almost a forgotten memory, but the plums are ripening fast and the figs are growing.

I am feasting daily on red currants and black currants, they grow amongst the flowers in typically French fashion. I think Roddy has also been at the red currants while photographing insects, but I have yet to catch him in the act!

However my favourite thing has to be the evening stroll around the garden, when the temperature is perfect, the light is softer, and the children are home from school, running around playing; their energy renews itself when the heat wanes, and even the dogs come out of their day-long slumber, it’s a time of day when everything feels……. just right!

130 thoughts on “An Oasis in a French Village”