In France there are unspoken ways of doing things, particularly  when it comes to mealtimes and just about anything to do with food. Break these generally unspoken rules and the chances are that although no one may say anything, there might be a discreetly raised eyebrow here and there; not in an unkind way, but merely as a gentle nod of acknowledgement that you’re a foreigner. However, I think that things may be changing a little, even if the fundamental values remain the same; at least for the time being.

The past couple of weeks I seem to have been rather social; I’ve enjoyed a cup of coffee with several different people, all French, and on each occasion when offered a coffee I have been asked if I would like sugar. “Non merci,” is always my reply, but I do ask if there is any possibility of a little milk. These are friends after all. However, on all three occasions this has turned into a jolly conversation which always starts along the lines of, “We never have milk in coffee, milk is for children!” Oh, how we have laughed at this, because for much of the rest of the time the French do have milk in their coffee, especially at breakfast, and when I remind them of this they laugh along with me!

At the weekend we were in Angoulême for a tennis tournament. We arrived around 10am, with the clubhouse a hive of activity, and from behind the bar came the smell of freshly brewed coffee. A smiling man offered us a small cup straight away, a tiny offering of a little espresso, the type I am getting so used to now. Every parent and every coach was offered a coffee as they arrived after their fairly long journeys, and I couldn’t help but think how terribly civilised it all was.

After the prize-giving, afternoon goûter (tea-time snacks) was laid out in the form of pastries and drinks, and the man in charge walked around offering all the children a handful of candies – trust me, French children love sweets just as much as any other child in any other country. The man stopped at Millie (who had come with us in her official role as president of the Gigi Supporters club) and with a wink he said, “You’re 12 years old, aren’t you?” (he knew only too well she was much older) and with a grin, Millie took the offered handful of sweets. The man then smiled at me as he passed and said, “But of course, none for the adults,” and he continued on his way, children partaking of the offerings, while adults abstained. Now, don’t get me wrong, adults eat candy just like the children in France, and not just limiting themselves to a square of dark chocolate after a meal; but what I found interesting was the general perception, that adults are not offered sweets, and nor are teenagers. Oh no, sweets are just for children, because this is what is expected. 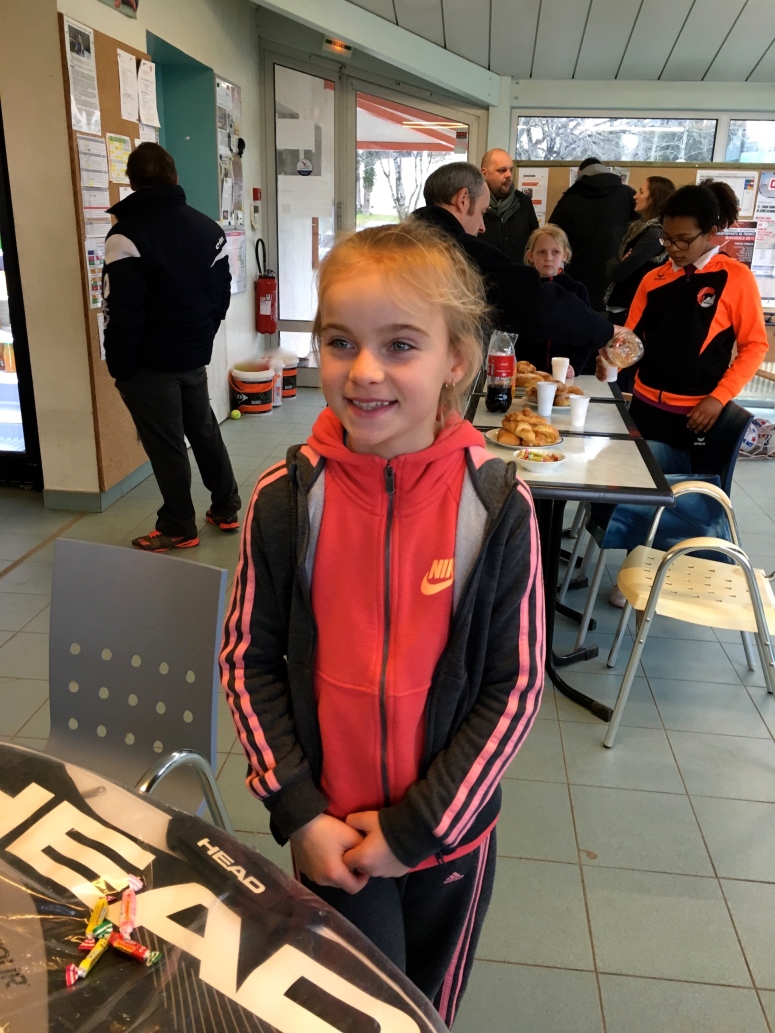 At the same tournament the players were, most unusually as it happens, given lunch; it was provided by the French Tennis Federation who were also running the tournament. This all took place in a small club-house, with a bar that had neither dining facilities nor a kitchen; as a result everything had to be brought in for the day. However, after some small Gallic adjustments, some tables were carefully pushed together just after midday, places were arranged and ten girls, aged 9 and 10, sat down to lunch. A simple rice salad was handed around, followed by huge baguettes filled with ham or cheese and salad; a bag of potato crisps was then added to each person’s plate, and this was all followed by a basket full of fruit. There was nothing remarkable about the menu, but what I loved was that although the girls didn’t know one another, they all, without exception, sat, ate and chatted to whoever they were next to. They might have only met that day or at previous matches perhaps, but as the food got to work and tongues loosened, friendships slowly began to form, a statement of humanity that today’s fast-food street lunches cannot compete with. In France they have never lost sight of that fact, that food is a means of socialising more than just a chance to re-fuel in mid-flight.

Which brings me back to school lunches once more. At the end of last summer I gave you a sample menu of a week of lunches from the primary school in our village. Back then it was early September; fresh produce was in plentiful supply and everything was sourced from local growers. Now however it’s the depths of winter, so I thought it might be fun to show you how the  menu shapes up at this time of year. Note that in France there is no school on a Wednesday afternoon, so no lunch is provided that day; also for us, February is a short school month as the two week winter holiday starts tomorrow (note that this state of affairs translates into excited children and a ‘super-happy’ me!!) 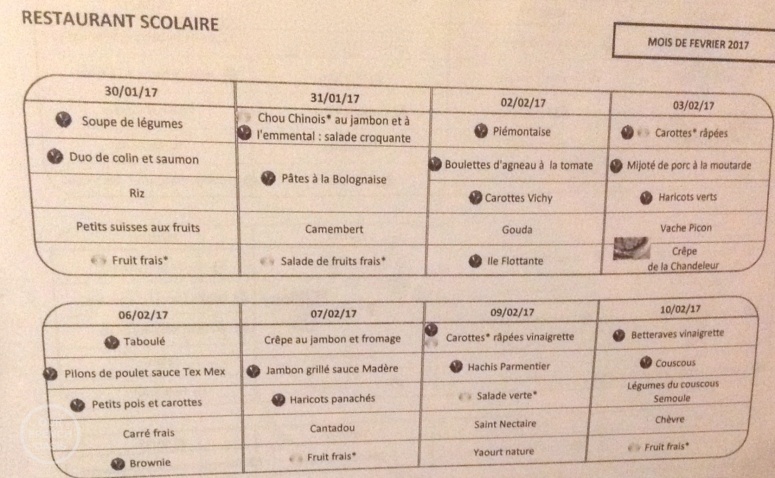 The dark circle means dishes prepared in a traditional home-cooked way, pretty much everything except for the cheese and fruit!

** Crêpe de la Chandeleur – the 2nd February marks the Catholic holiday of Candlemas; it commemorates the purification of the Virgin Mary and the presentation of baby Jesus. In France, this holiday is called La Chandeleur and traditionally crêpes are eaten on this day.

I have always said I would happily eat at the primary school every day! Nothing is forced on the children but they are asked to at least try every dish. Second helpings are nearly always offered and of course there are sliced baguettes in bread-baskets on the table at all times! The children sit at tables of four to six, with places set in advance with china, glass, proper cutlery and paper napkins. Water is placed in a jug in the centre and the children are served by adults. Across France some schools may do things a little differently but in my experience the general theme remains the same throughout the Primary level. Once the children begin Collège (middle school) there is usually more of a canteen-style arrangement, but I can tell you the food again remains excellent with three or four courses on offer. And French children are no different to any others, when there is a delicious dessert instead of fruit or yoghurt there is much excitement, the highlight of lunch!

On a very sunny note I’m going to say goodbye, because we have had a week of springlike weather and I just have to show you how it looks – but – I haven’t forgotten how the weather has been so fickle this winter, and acknowledge the fact that we will probably be freezing again next week! We’ve eaten our first lunch of the year outside, and without even the need for a coat as we are quite literally basking in really warm sunshine.

We don’t have enough flowers for an entire garden blogpost, but we do have a mass of daffodils in bloom; the centre of the chicken garden is a sea of yellow, all from bulbs I planted the first autumn we were here.

Daffodils are bobbing in the sun amongst the remaining branches, that I have still to pick up, scattered around the garden from the storm the week before; 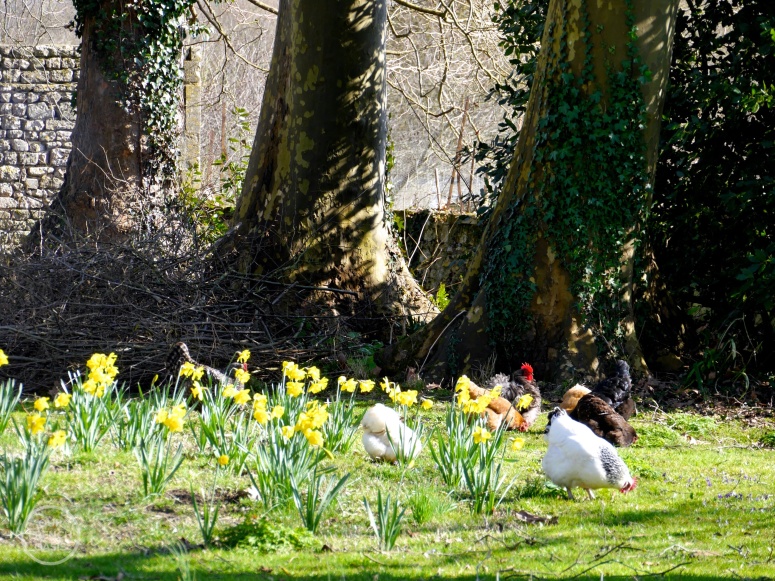 The first blossom on our plum trees has burst into life 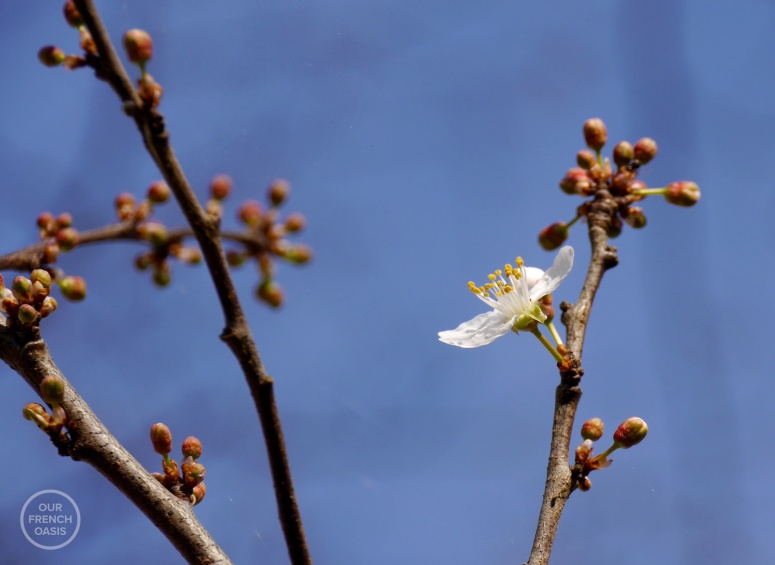 and I’ve spotted mimosa flowering in a garden alongside the road.

The warmth, the sun, and the flowers; as I drove home from school yesterday with the children I commented, “this weather; doesn’t it just make one happy to be alive?”

168 thoughts on “Food for Thought”