The weather gods have certainly been playing with us this winter and I daresay they’re not done yet. They’ve been tossing us around like a bunch of wet socks inside a washing machine, and we’re never sure quite what they will throw at us next.

We’ve had rain, lots of it. We’ve also had the coldest weather for many years with ice six inches thick on the pond.  Days later we had almost record temperatures at 17C. And now, we’ve had the wind, with the worst storms to hit the coast for a long time. The only thing left to come is snow; perhaps we’ll see a few flurries of the white stuff this month, or perhaps we won’t – who knows?!

This has turned out to be a ‘real’ winter and although I look forward to spring I’m still rather enjoying these harsh days; this time last year everything was already in blossom as spring arrived a month early. The garden was totally confused, I think we all were. The bees definitely were! This year though, weather matters are definitely keeping us on our toes. After the drama of the gales over the weekend, we awoke this morning to thick freezing fog; the roof-tops of the village houses were dusted in white with a generous covering of frost, twinkling in the first rays of sun as it stretched out its warming fingers through the fog. 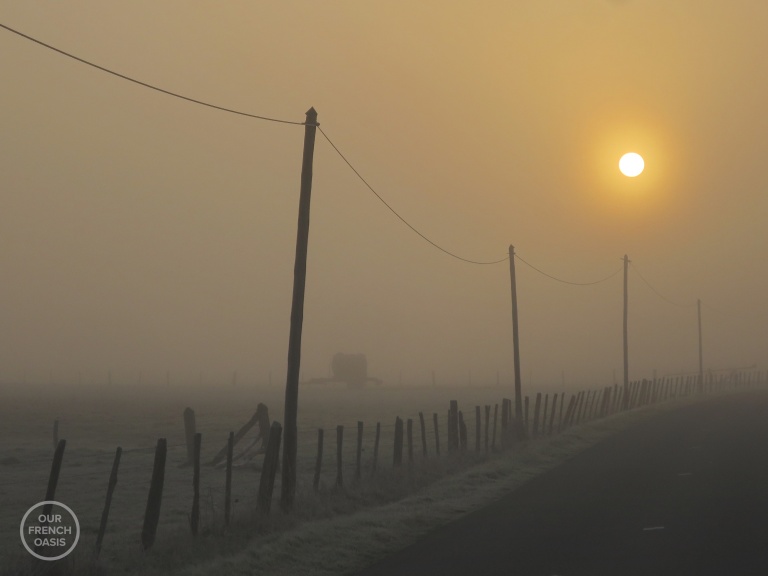 Some of you may know that Millie, our second daughter, spent eight days in Madrid in January. Well, her Spanish correspondant is now staying here, enjoying eight days in France. The night she arrived we were under a vigilance rouge, a red alert, typically put in place for extremely dangerous weather. I’m sure it was not quite what she wanted to hear after a long 12 hour coach journey. She must have wondered exactly what she had walked into as we battened down the hatches. The conversation at supper that night was a garbled mixture of Spanish, French and English, with much talk of the forecast wind; impending storms always induce an atmosphere charged with excitement and anticipation amongst our children.

The worst weather hit us in the early hours, and even with the shutters firmly closed throughout the house the noise awoke us all; apparently the highest winds were recorded at 150 kph. Bentley normally sleeps at the foot of our bed but he is terrified of storms, right on cue as the first dustbin lid banged its way down the street outside he started to pace around the room, panting feverishly in fear. I was wide awake by now, listening to every gust and every noise outside.

I asked Roddy if he had remembered to strap down the trampoline; sleepily he replied, “no”. I worried about the chickens, and imagined them flying in their coop around the garden, like some scene from Peter Pan. The old house creaked a little but I knew we were safe. It had no doubt seen far worse and it’s stood the test of time over the past 220 years. I turned over and eventually went back to sleep.

On Saturday morning, we tentatively opened the shutters, peering out of upstairs windows, before coming down and surveying the scene outside more carefully. The wind had been coming from the west, so on the eastern side of the house plants and tubs remained quite undisturbed.

The sky to the east was ominously pink, and those wise words uttered so often by my father rattled around my brain, “Red sky in the morning, shepherds warning”.

Our garden looked a bit like a battlefield, with branches strewn across the lawn where they had fallen, and our trampoline upside down against the neighbours fence! Thankfully the chicken coop had remained firmly in place, and its occupants seemed totally unfazed by their night’s disturbed rest – each in turn hopped out of the small door into the stiff breeze and made happy chicken noises. Fritz, by the way, is very much better; he’s back in the main coop, back with his friends, limping a little but enjoying being part of the flock once again.

Driving about the village after breakfast we could see a few trees down, but there seemed nothing too serious otherwise. We listened to the news and talked to a friend who lives right by the sea who reported back that the coast was completely paralysed, all power was down and trees blocked several roads. Friends inland repeated a similar tale of woe, and we realised we’d been very lucky.

We remained on an orange alert the entire weekend and on Sunday the winds picked up strength once more, but it was nothing compared to the previous night. For some exercise we decided to head to the beach and battle the weather. Our Spanish visitor had never seen the coast in the winter; she was only familiar with the Mediterranean in the summer months as she has travelled quite a bit but she had never experienced the wrath of the sea in stormy conditions.

Down on the coast, the water rolled in roaring tables across the shallow sands and raced up the beach, scattering the dogs and the children as they squealed with delight; the weak light gleamed on a surface studded with hissing, bubbling suds.

It was hard to walk with the wind, and at times it pushed us forwards so we banged into each other; alternatively it also held us back, making each step an effort requiring concentration. 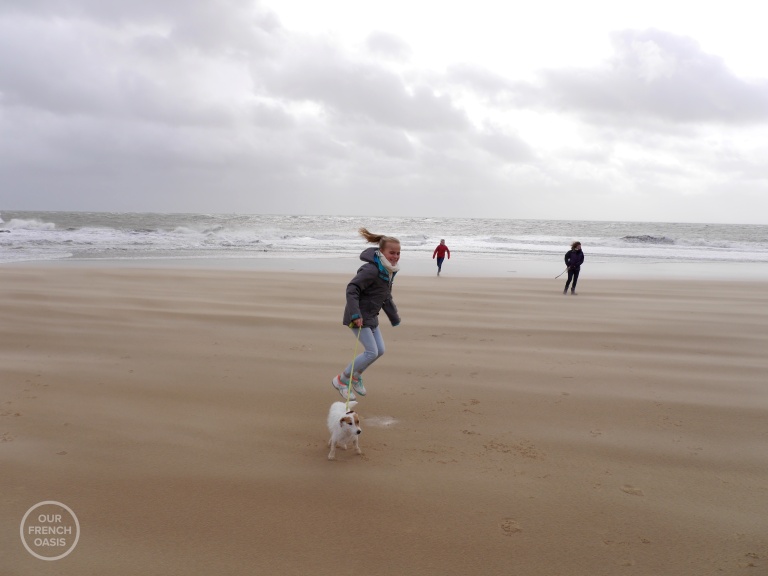 The sand whipped along the beach, blowing grains around in the air, and our foot-prints disappeared within seconds as we trudged into the gale.

The vista was a monochromatic scene of greys and browns. The sea was a churning mass of froth and foam, stretching out to the horizon until it merged with the sky. Anyone would think this image is in black and white rather than full colour!

Leaving the sand, which was stinging our eyes (and Bentley and Evie’s too) we turned in the opposite direction and walked along the rocky shoreline towards Royan. As the clouds raced along above us we briefly caught a glimpse of blue sky.

The local wooden fishing huts built on stilts, known as carrelets, can be found all along our coastline. At first glance they look rather flimsy, as if they would blow down with the slightest puff of wind; but looks can be deceiving, they are actually built to stringent standards and are very much more solid than they appear. 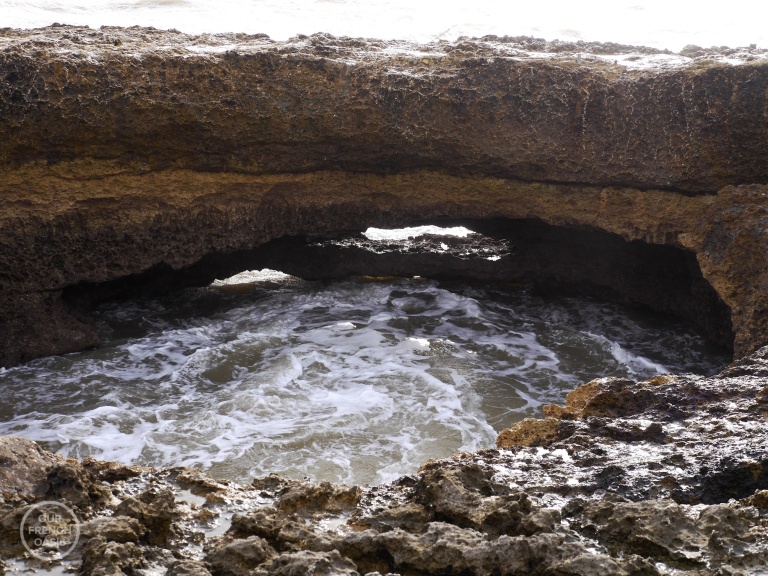 The carrelets are particular to this region and are used by local fisherman to catch small smelts, shrimps and eels. Their main implement is a square shaped net (a filet carré which has given the shacks their name carrelets) which is winched up and down by a simple hand  pulley. Their bright blue paintwork was pretty much the only dash of colour on this particular day. 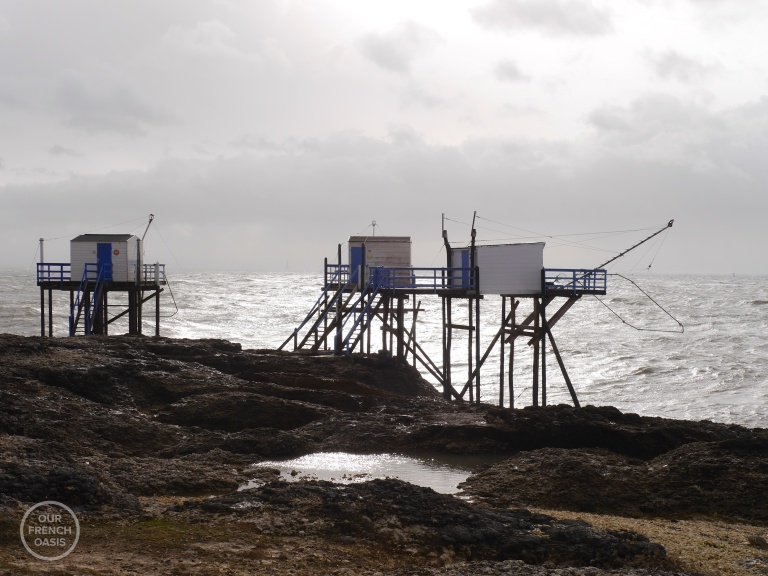 And when it’s pouring with rain, in the depths of winter, when the skin on our faces is frozen stiff and we’re almost unable to move from the bitter driving wind, our thoughts turn to food for comfort.

When in Spain, Millie ate Paella, so as we’re in the the oyster capital of France, we thought we should serve shellfish to our Spanish teenager as part of her first experience of the Charente Maritime. However, she explained she was not a great fan of fruits de mer, so instead we cooked traditional french galettes, turning our kitchen into a crêperie for a couple of hours!

Traditional Galettes are easy to make and for a batch of 10 or so you will need:

Whisk everything very well together and leave to rest in the fridge for half an hour. When you are ready to cook the galettes, wipe a little olive oil around a large flat pancake pan or frying pan and place on a high heat, pour in about half a cup of the galette mixture and swirl it around to coat the entire base of the pan in a thinnish pancake sort of way. Cook on a high heat for two or three minutes before flipping over.

Now comes a difficult choice – to either cook it completely and then add any fillings you want, or instead sprinkle some grated cheese and an egg on top now to let it all cook and melt together. Happily, I can say this difficult choice is actually also the best part, because you can do what you want! If you do decide to cook an egg from raw fold over the edges of the galette to make a parcel that you can flip over several times to make sure the egg is cooked and the cheese melted – it’s a delicious combination!

For our special treat, we’d cooked some bacon on the side and also made a creamy mushroom sauce. Along with a couple of other additions that the children brought to the table, it became a real ‘pick ‘n mix’ session, with everyone building their own galette.

Frankly, there is nothing like an overdose of salt-laden fresh air and physical activity to entice a hearty appetite. Not a lot remained by the time we had finished!