Rummaging through someone else’s possessions or scouring makeshift tables for illusive treasure may seem like an odd way to spend a perfect hour, but I’m a bit of an addict. Sometimes I’m on the lookout for something specific, and sometimes I’m merely browsing, looking for items which I can repurpose; searching for relics of the past, for vintage bric-a-brac or genuine antiques. More often than not, I walk away without buying anything. But no matter what reason one has for browsing Brocantes I always feel a tiny frisson of anticipation as we arrive at our destination and see a bubbling crowd thronging around the stalls.

I often wonder what the real fascination is; what draws so many people week in, week out? Are they hoping to find a Fabergé egg amongst the second hand rubble, and if they did what would they do? What would you do? Walk away feeling thrilled knowing you had seized a real gem or would you feel guilty handing over a five euro note for something you knew you could easily add a few noughts to and resell? As I wrote this I pondered what I would do. I couldn’t just wander off, I would have to split the sale proceeds with the vendor, for surely I would have to sell it!

Which brings me to my ongoing disappointment with Brocantes here this summer (no I’m not upset that I failed to find a Fabergé egg, well perhaps just a little!) No, the truth is I’m growing slightly disheartened by the enormous increase in pure ‘tat’ that seems now to be the norm. It seems that at least 75% of anything on sale this year has been junk made in China and half of it is not even second-hand. We are far from Brocante regulars; we don’t go every weekend and I don’t think we visited one at all during July and August, but we do have our favourites that we go to each year. The girls nearly always come too, but even they groaned a few times this year at the lack of anything interesting for sale. At one of our local annual pilgrimages they amused themselves instead at some tables with old-fashioned wooden games; remarkably these seem to have had something of a resurgence in popularity in France in recent years.

On the plus side though, I recently made three purchases in a short half-hour visit at another immensely popular local event. I swept through row after row of stands like a whirling dervish and quickly snapped up this old zinc watering can which stood out like a rose among the thorns,  a steal for €10

it’s definitely one of my favourite finds this year and is already in use on the kitchen table.

Then there was this pair of silver-plate wine coasters for €5 which will be quite at home in our guest-house. The wooden bases are in perfect condition and so is the baize on the bottom. I know some people like the patina of tarnish

but I prefer to polish my silver and I was really pleased with the way these cleaned up, none of the silver had worn away. 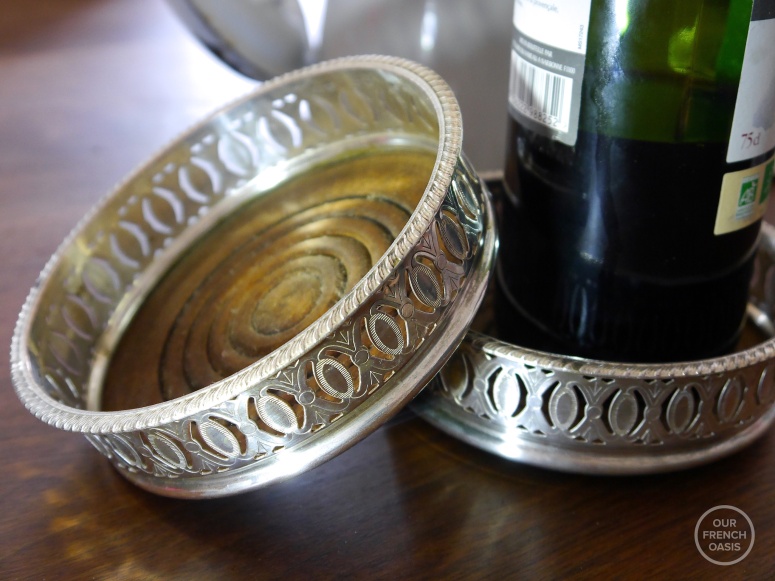 If you are on the hunt for a bit of a challenge or want something special to complete a project, another good place to visit is Emmaüs. Emmaüs was founded in Paris in 1949 by the Catholic priest and Capuchin friar Abbé Pierre to combat poverty and homelessness. The charity provides formerly homeless people with a home and work, usually collecting, sorting and reselling donated furniture and household goods. There are centres all over France and our relatively local one is very small by comparison to a great many others. 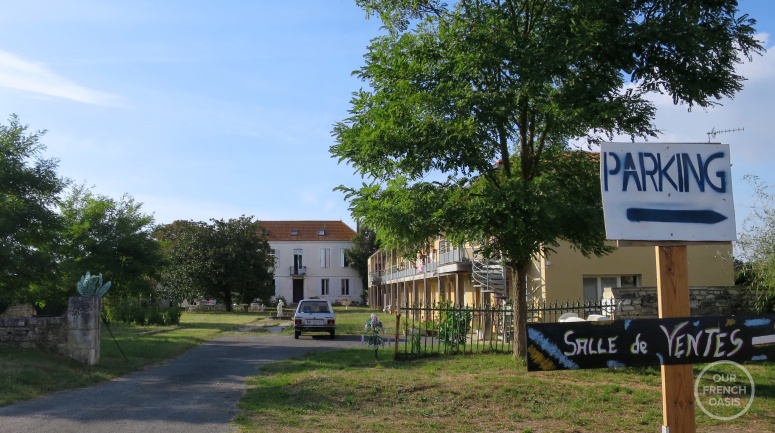 Outside there is crockery and glass of every colour, shape and size, and most individual items can be bought for a few cents. It would be incredibly easy to stock an old-fashioned kitchen with a box or two of these original gems. 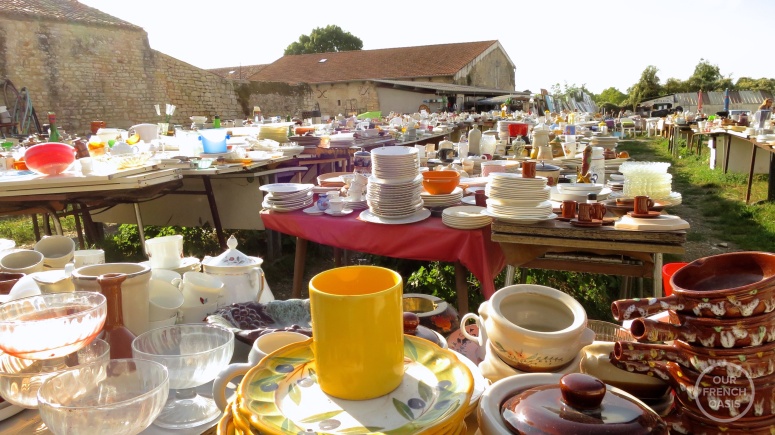 The real fun is inside a huge purpose-built hangar which serves as a warehouse; here there is everything including plenty of big pieces of everyday brown furniture. There is nothing particularly remarkable amongst the armoires, sideboards, buffets, headboards, tables and chairs, but there are plenty of bargains if you want plain honest traditional furniture and some pieces just simply have to be admired for their old-fashioned craftsmanship and construction. Much of the heavy country furniture is post-war from the mid-20th century. The only negative is the sheer weight of some items and sometimes it takes several strong men to move a piece.

Personally I think the piece below is quite ugly, but it is solid wood throughout and well made with dovetail joints in the drawers and at €92 I am tempted to imagine what could be done with some paint and a little imagination. Would you keep the two upper cupboards on either side of the shelf? I think I would take them out so that it was open shelving above the four base drawers and cupboards and then because it’s not an antique I would have no problem wielding my paintbrush and giving it a new lease of life. 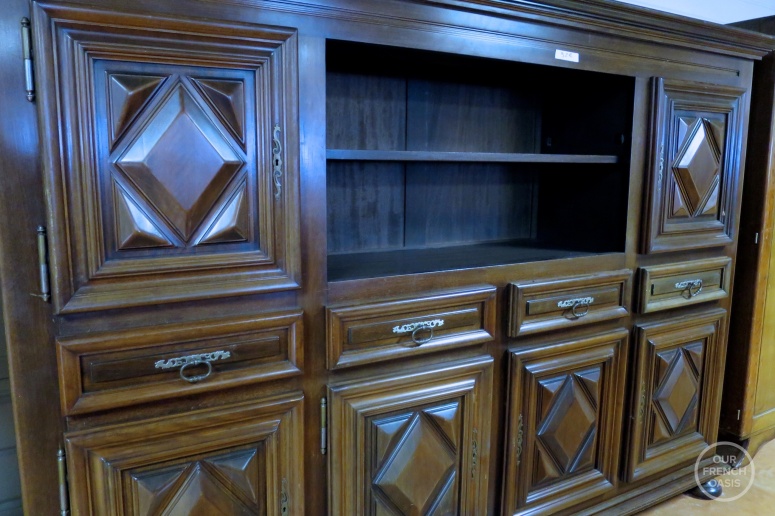 The outer veneer on the ornate piece below is flaking in places, but again think of what it could look like with a little hard work – and it was on sale for just 20 euros! I’m thinking of buying it as a fun winter project for Millie and I. Most importantly, Roddy and I can move it between us and it would fit in the car. I don’t need it but it could sit in the barn for the winter. I am fairly positive it is from the turn of the century, before WWI. I don’t even know if I like it that much but it intrigues me, every figurine is hand carved, think of the work and time and effort that went into this. But I need some help and I know many of you are way more creative and artistic than I am, especially with furniture. What would you do with it, because before I rush out and buy it (if it’s still there) I need some ideas as to what to do, would you paint it and if so how to paint it?

Moving away from second hand collectables, another fun outing was the Pottery Fair last weekend at Mornac sur Seudre.

Vendors came from all over the region and even further afield, all of them individuals  from small potteries selling their own handmade items, and to a man (or woman) true artists.

But even though it was fun to walk through the stands looking at the colours and unique shapes on offer, by far the most interesting spectacle was watching the vendors sit down together for lunch. A long table had been placed right down the middle of the main square and here people sat. They had brought their own food, their own wine and water, and they sat together like one big communal family; after all it was lunchtime and a quick sandwich whilst standing behind a stall simply would not suffice for any discerning French person. Selling one’s goods or not, lunch is lunch and in addition to the food it’s a convivial time to sit, chat, eat and be social. What was most remarkable of all was that every vendor would keep an eye out for their neighbour or friend’s unattended stall, alerting the owner with a nudge or a foot under the table that there was a prospective customer lurking.

135 thoughts on “Brocantes, Treasure Hunting and Your Advice Please.”