One evening last week we decided to go out for dinner. Hustling all the children into the car in a reasonably timely fashion we headed fifteen minutes down the road to the enchanting village of Mornac Sur Seudre. Listed as one of the prettiest villages in France it is something of a magnet to tourists. We weaved our way in between hundreds of likeminded people, content to stroll and soak up the atmosphere as we wandered through the narrow streets. We passed several restaurants already full and headed straight to the river and the little harbour of sorts at the very end of the village where the buildings meet the marsh.

We weren’t quite sure what or where we wanted to eat, despite a cursory glance at one or two menus nowhere so far had persuaded us to stop and ask for a table. Instead we headed away from the throng of people, away from the charming centuries-old white-washed cottages and unique little artisanal shops and walked down a quiet little road along the small tidal channel that led out to the main river. Boats sat on the mud waiting for the tide to set them afloat again. 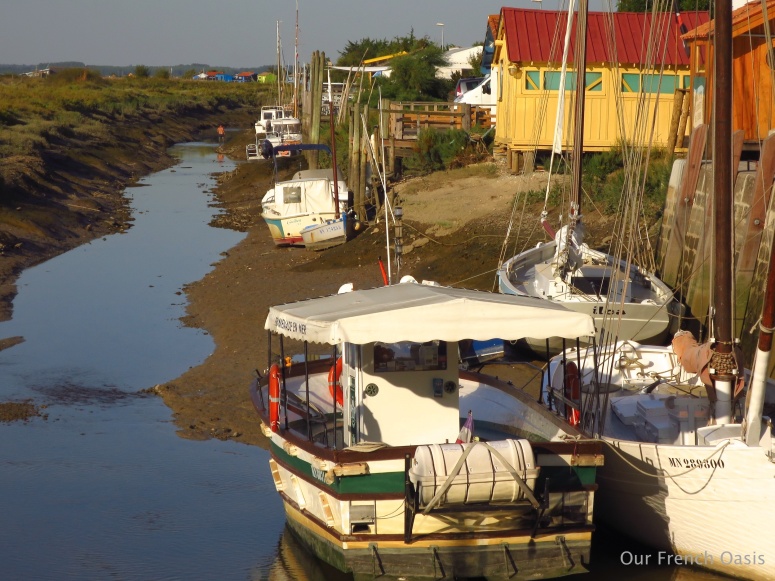 Others sat on the hard and the odd yacht was tied up to an old jetty.

The river was lined with old fishing huts; people were eating outside on attached balconies overlooking the water, sharing meals cooked in their tiny wooden cabins. Peering through open doors I am fairly sure they had electricity, but certainly no running water. I had a sense of old summer customs being enacted, generations of families enjoying a tradition of eating in a place they knew so well. 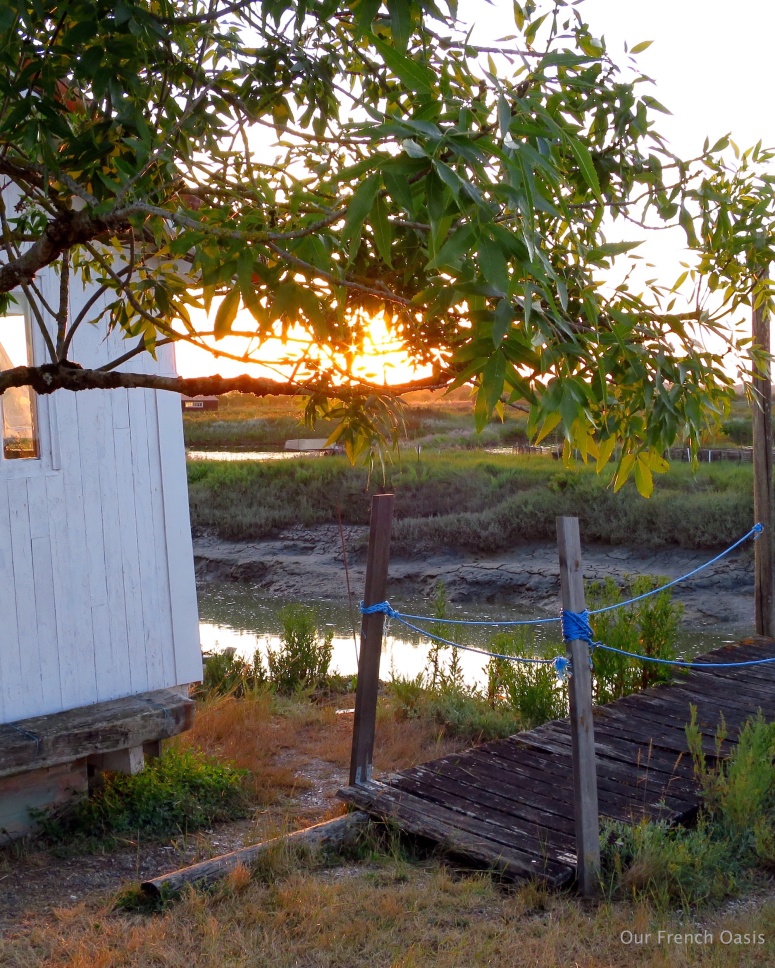 We could see flames and smoke in the distance down the dusty road and as we drew closer we saw someone was tending several small open fires. Unsure what exactly he was doing we stopped and looked around. There were crates and crates of pine needles, some of which were being burnt and soon we realised the man in the red shirt was cooking mussels in a most unusual way.

A waiter came and picked up one of the trays straight from the fire and carried it away, smoking and steaming in his hands. 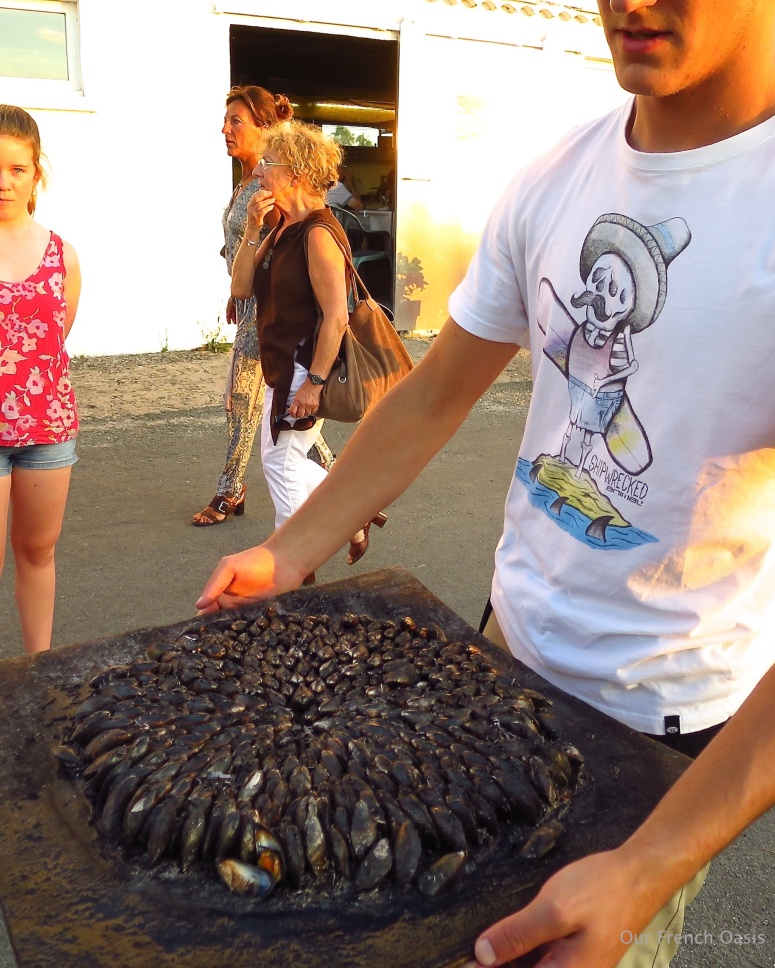 We looked closer and plucking up our courage asked some questions. This was something even our resident fisherman, Roddy, had never seen. It turned out that this is an ancient Charentais method of cooking mussels, a local tradition to the area. Moules are as French as any dish can be, but normally we think of the classic moules frites, mussels and french fries, where the mussels are usually cooked in white wine and garlic. But this was something totally different.

We learnt the pine needles impart a delicious, smoky tang to the mussels in a classic  dish called terrée de moules, roughly translated as ‘mussel bake’. The mussels are placed round-side up on large wooden trays.  About 12″ of pine-needles are piled on top and then they are set alight and left aflame until the needles have burnt to ash, a process which takes about 5 minutes. 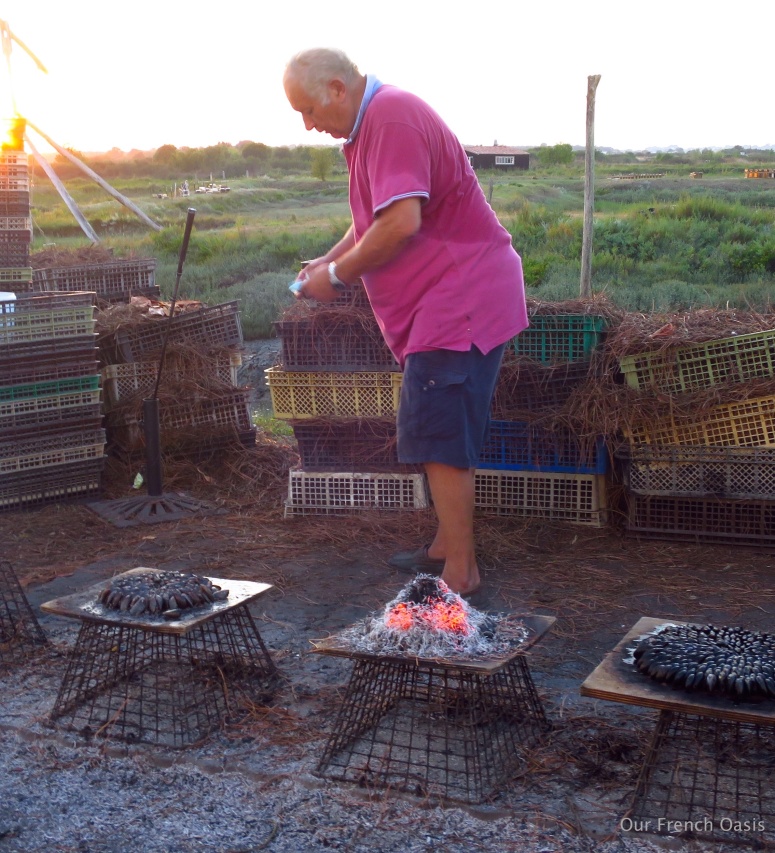 Once the needles have reduced to nothing but a pile of ashes these are then fanned away; leaving perfectly cooked mussels ready to eat. 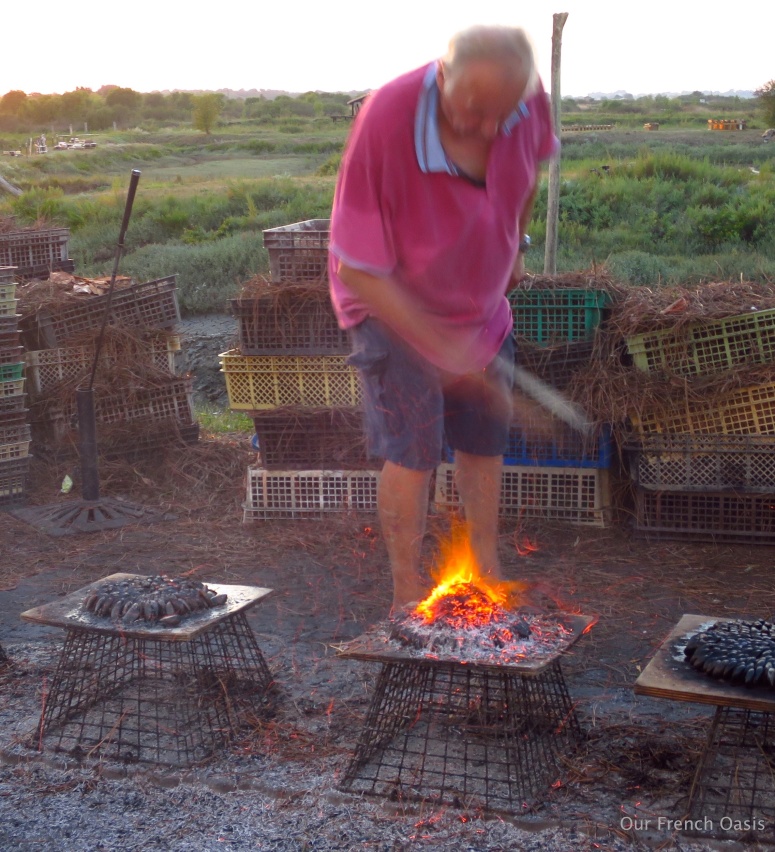 A few metres further up the lane we spotted the little restaurant, a relaxed laid-back affair built solely for the summer season.

The menu was fantastically simple. A portion of baked mussels for 15 euros. The menu then went on to explain that in order to respect the ancient tradition, their mussels are served with garlic bread and are not prepared in advance, so a small wait is essential!

The list of apéritifs was equally simple, and a local Charentais wine was offered in either red, white or rosé varieties; in either a standard-sized bottle, a slightly smaller pichet (carafe), or by the glass. There was even a bottle of organic red and white on offer too.

This is exactly the type of restaurant we love; simple, fresh, unpretentious and down to earth. 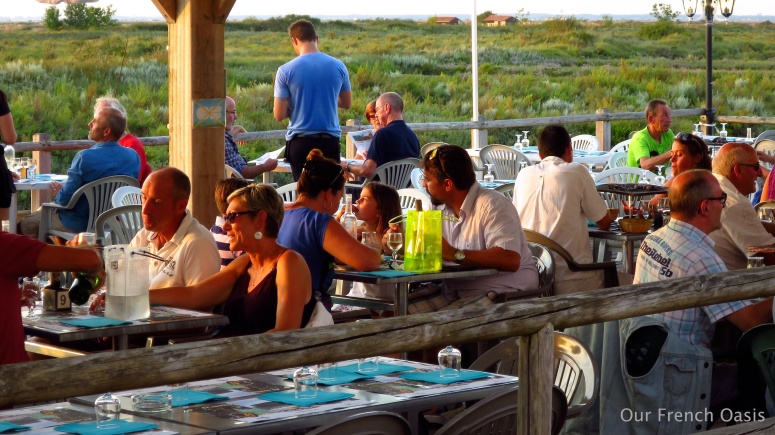 The views were spectacular and the ambience fantastic

Some people came by boat to join in the fun, carefully easing their way to the jetty as the tide slowly rose.

Oh, and the moules were incredible.

Slowly the evening slipped away. We left as the sun was setting, somewhere close to 10pm. The evening hadn’t been at all what I had envisaged when we set out a few hours earlier; instead it was a million times better, a totally unexpected surprise from a small fishing village in the middle of the great marais de Seudre. 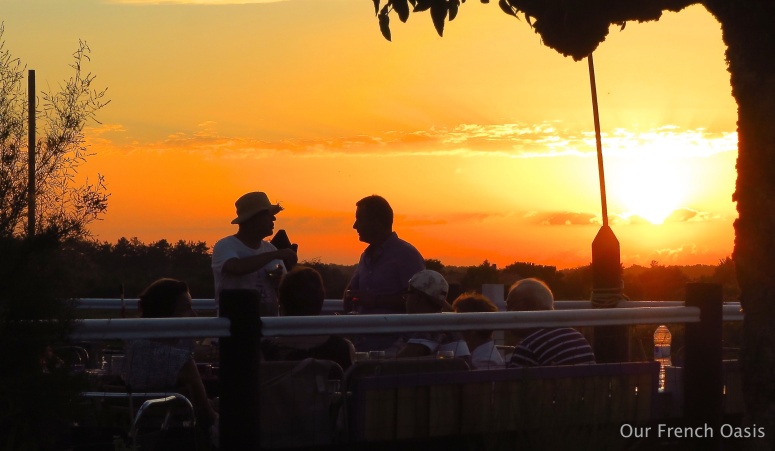