Having started my series of articles about renovation with a 12th century château renovated by a truly dedicated Frenchman, I thought it would be fun to go to the other end of the spectrum for my second article and meet an ‘expat’ family who have completely transformed two barns into a pair of fabulously comfortable gîtes. These jewels are nestled in the tiny hamlet of Vergné in the north of the department of the Charente Maritime and an hour east of La Rochelle, they stand alongside a lovely farmhouse which is home to Simon and Sue Paine and their two teenage children.

The Paines are a British family who came to the Charente Maritime on holiday a long time ago and fell in love with region. The temperate climate of the area’s long sunny summers and its mild winters, together with excellent transport links to the UK, made them wonder about the possibility of a future here for them. At the time they were London-based, with Sue working in fashion and Simon working for a large corporation in business development; but, wanting to escape the rat-race and envying the quality of life on the other side of the Channel, they eventually sold everything in the UK and bought the house, its two barns and about an acre of land over 12 years ago. They wanted to turn the barns into two gîtes that they could rent out and it seemed like the perfect opportunity for them to be able to work for themselves; they would be able to spend more time with their children and enjoy the slower pace of life which France offers.

The location they chose was perfect for them; rural but not isolated, within 15 minutes of the market town of St Jean d’Angely, and within a couple of minutes drive from the busy village of Loulay which has a boulangerie, grocer, bank, post office, pharmacy and restaurant with a bar.

Neither of them had ever tackled a project of this size before. In the UK they had renovated their house, but not completely from scratch, and Simon certainly had never done any heavy building work. But what they lacked in experience they made up for with a huge amount of enthusiasm, and undeterred they applied for the various permits required to convert the barns to dwellings. Nothing is easy when you are first and foremost a foreigner; like many people who move to a strange country they struggled at first to understand how things are done, a state of events compounded by their lack of French. Everything turned into a huge challenge. But by far the most frustrating part they found was the poor customer service they had to deal with, although Sue is quick to point out this has improved a lot since then. Things don’t happen overnight, often they don’t happen for several days or weeks, patience is the name of the game in France! 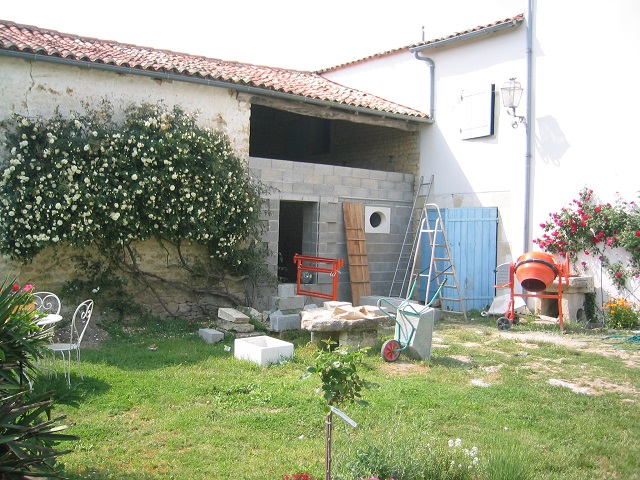 At the time when they arrived their children were very young and they all moved into the main house. This was totally habitable and they still have done nothing to it since they arrived. Sue tells me there is plenty she wants to change, and lots more she’d like to do, but the building is totally charming as it is and I can see why no one has been in any rush to do anything. While they lived in the house they started work on the first gîte, named Le Cognassier (The Quince Tree); it took a year to complete from start to finish. This gîte has three bedrooms and two bathrooms, and it retains many of the original features and old stone walls. To give the gîte a personal feel and to keep things very French, Sue hand-painted the kitchen units and decorated everything in soft neutral tones. 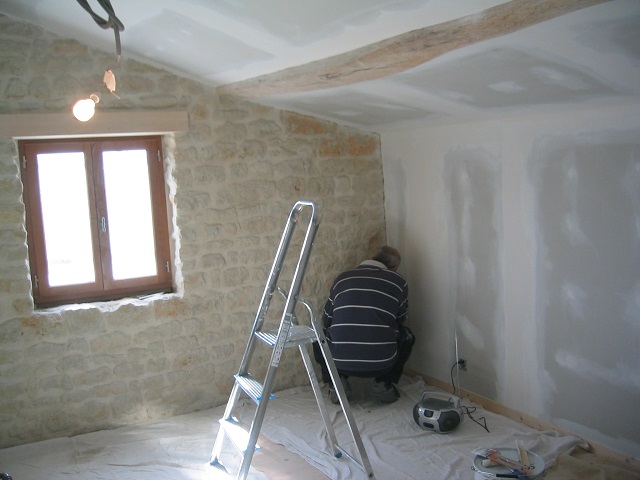 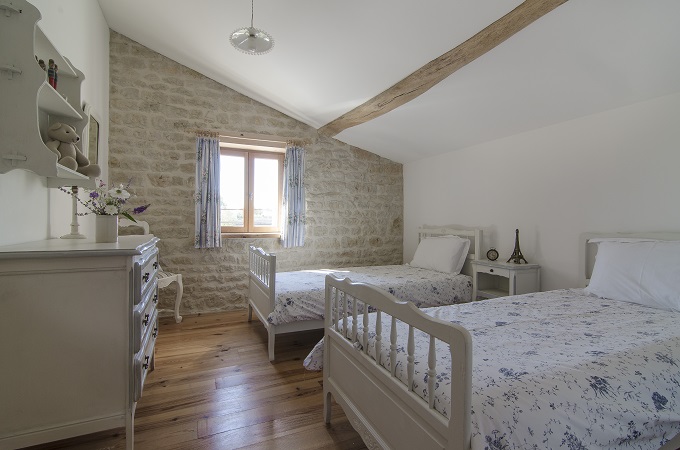 The second gîte, Le Cerisier (The Cherry Tree) took just nine months to complete and again it has three bedrooms and two bathrooms. Like its neighbour, it is also beautifully finished with a hand-painted kitchen and traditional french colour schemes. 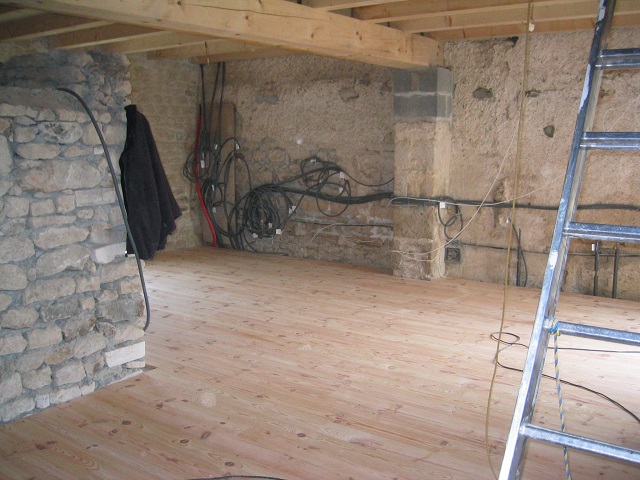 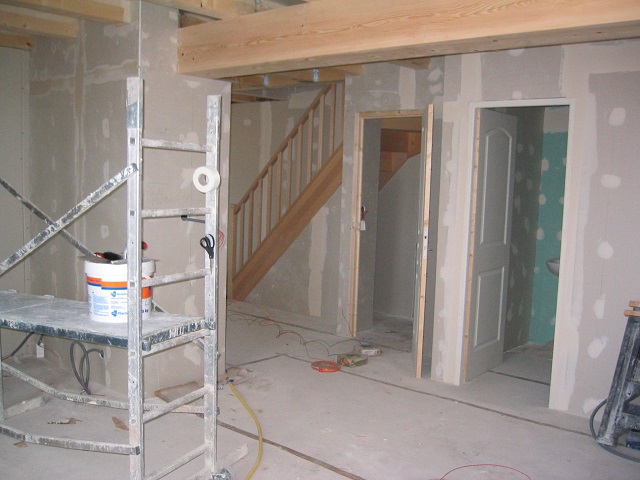 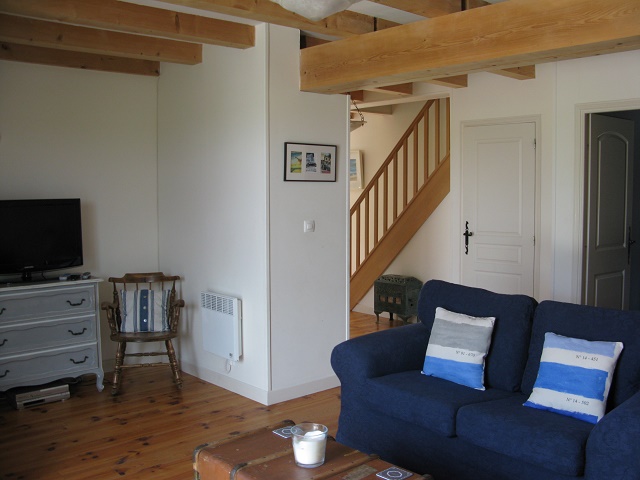 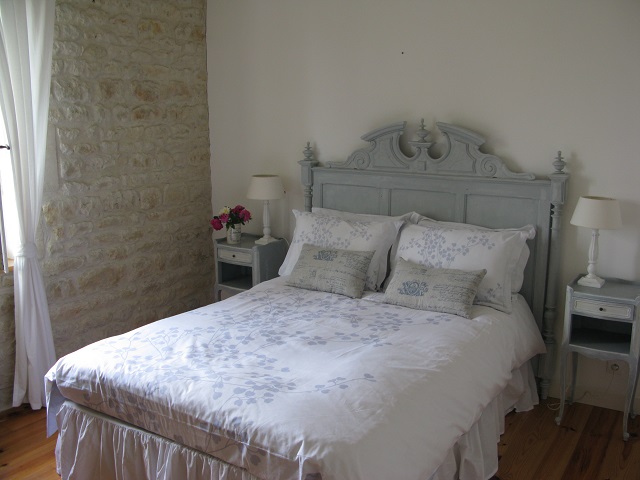 The entire property is surrounded by large walled gardens, with roses, clematis and grape-vines scrambling up them; it is totally private and in between the old walls they built a fabulous swimming-pool. My words don’t really do any of this justice, the gites are beautiful, just the sort of place where I would want to stay, not only are they extremely comfortable and stylish but they also back onto wonderful open countryside with walks straight from the garden, this is definitely my kind of place!

Simon and Sue opened for business in 2005 and they have never looked back. In the summer it is hard work, with ‘changeover day’ on Saturday particularly hectic; typically there are six sets of bed-linen to be washed and ironed, two houses to clean to perfection and everything has to be finished within the space of a few hours. But, it’s worth it; they have met so many lovely people, and many guests who have become friends; one family in particular have returned every year for 12 years and are now considered part of one big extended family.

Sourcing local antique and vintage items to furnish the gîtes was one of the best parts of the renovation, but this came at the end of the work when the completion was in sight and visiting local brocante fairs and local stores is one of the great pleasures of living in rural France. With her creative flair and background in design, Sue has also created an online boutique, Chateau Chic Direct, where she sells original French furniture and accessories. An idea that became a natural progression once the building work was finished, the business now has a loyal and growing clientele from all over the world. Some people browse her website and like the look of one of her latest finds, whilst others contact her with requests to source specific items. Sue has become  well known in her area and as a result is able to seek out an eclectic mix of items at a ‘local’s price’ that an outsider would never be able to find. Inside her own home there is a nod to her background in design and her passion for vintage French, and despite the fact that little has been changed, it’s extremely pretty; anyone seeking the perfect French home would be very envious!

Simon and Sue now have a lifestyle that suits them well; they love the peace and quiet, the tranquility of life in the Charente Maritime, and they love the upbringing it has given their children; wonderful education and a freedom that they would never have had back at home in the UK. 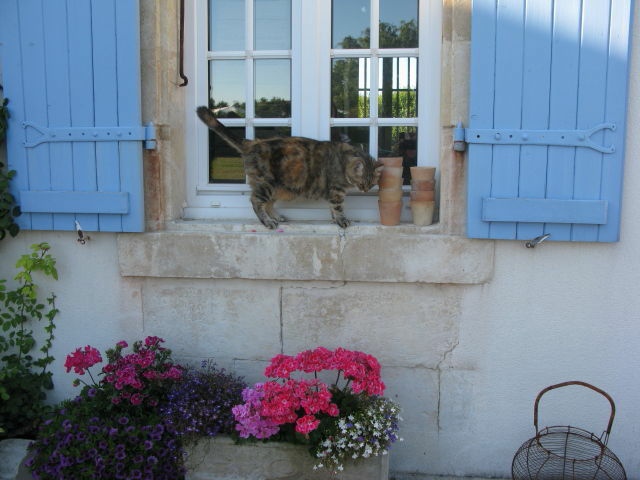 Many dream of doing just as the Paines have done, ‘upping sticks’ and moving a family and possessions to start all over again in rural France. For some it is just that, a dream, sometimes impossible to fulfill; but for others it is a real possibility and so I wondered if Simon and Sue had a word of advice for anyone else wanting to do something similar, or indeed if there was anything they did that they would change?

“I can’t think of anything we would have done differently. Maybe invested more time early on learning the language but we really had no spare time back then,” Sue said succinctly.

For me, that just about says it all, with a lot of hard work a dream can certainly become a reality.

I have to say I am finding this series totally fascinating, learning about how people renovate their properties and what drives them to do so. Next time I’m bringing you a property restored by a French family, laying to rest the old myth that the French don’t renovate houses as they only build new ones. In the meantime, if you would like to find out more about the Paines’ gîtes you can link to their website here and if you would like to browse Sue’s online shop and read more about her treasure trove of vintage finds click here! You can also find Chateau Chic Direct on both Instagram@chateauchic17 and on Facebook.

37 thoughts on “CREATING THE PERFECT PLACE TO STAY”