I had so many good intentions yesterday. I planned to start my Christmas shopping, harvest the olives, make salsa with the mass of chillis we still have growing, freeze the aubergines and do a countless other things; the list was endless. But none of it got accomplished, not one thing. I have been thinking a lot about the First World War, as today is Armistice Day, which is a public holiday here in France. In every town and village there are war-memorials and today the local people will gather about them, flowers will be laid, and we will all remember someone who is no longer with us; for we all have grandparents or relations who were affected by WWI. Church services will be held and church bells will ring. I think as one gets older one thinks more about these things. As a result, I wanted to write a post today thinking of all those people who fought for us and who gave up their lives for us, so that we could all live the lives we lead today.

My grandfather was in the 5th Battalion of the Royal Welch Fusiliers; he was in the trenches at Ypres, and he was one of the lucky ones as he survived. In fact he lived until he was 91 years old. He was one of the most incredible people I have ever known and it was whilst thinking about him and Armistice Day that I got so distracted. I have a small leather suitcase of his in which he kept all of his past momentos, many of them are from that dreadful war.  Occasionally I open up this case and when I do I am engrossed for hours, scattering papers all over the table. Yesterday was one of those days. However, this time everything was a little different as the children joined me when they arrived home from school after being collected by Roddy (he volunteered as he saw I was engrossed in memories), and they too are fascinated by the treasures in this little case. Everything is so carefully preserved. And although in 1918 the war may have finished in Europe, it hadn’t finished for my grandfather, as he then went out to Palestine where he continued fighting until the end of 1919. There is so much history in this one little valise, it’s full of the many things he carried with him 100 years ago, like this map – I presume he carried this into the battle-zone.

This dinner menu was, I assume, signed by everyone at his table at a Regimental function in Egypt. 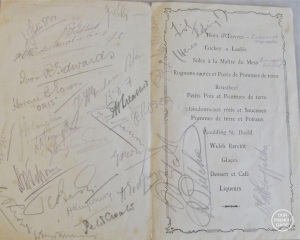 Throughout the war he kept a diary, and the end result is a collection of small beautiful leather-bound books. Virtually every day he wrote entries, usually in pencil, and in impossibly small hand-writing…. it is oh-so-difficult to read; but it tells his life, and how he felt at the worst of moments. Nearly all the notes are about letters received or sent and of course about my Grandmother to whom he was engaged at the time, always referred to as “her”. It really makes one understand the importance of communication, the news from home and the letters written and received; they are so obviously the logical constraints that kept him sane at times.

Here are a couple of excerpts from October 1917.

Friday 5
Letter from the Mater. Express letter from her – + another one at night – so my ache went away & I wrote a long one to her – & now everything is bon again – am just one big grin, outside & in

Amongst the many things in this treasure-trove of a suitcase is an original newspaper. It is the Liverpool Echo, dated Monday, November 11th, 1918. With very great care, for the paper is very nearly a century old, I read the headlines, I opened it up and read the articles; I was totally engrossed and I have to admit I had a huge lump in my throat. 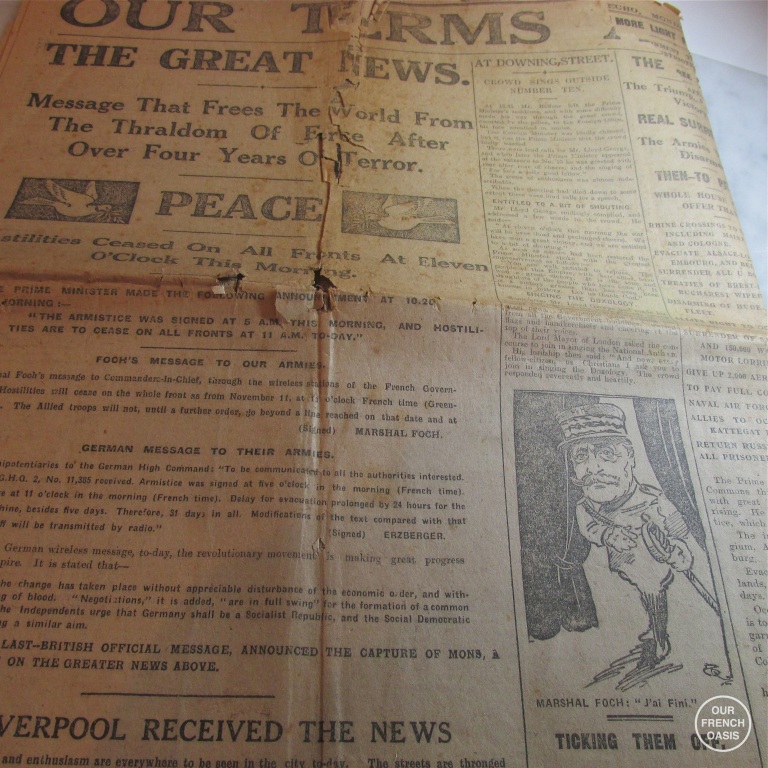 Tucked away in a small leather purse is one of the most important mementos. Carefully wrapped in a piece of the original, bloody bandage, is a scrap of battered metal, the size of half a finger-nail. It is the piece of shrapnel that sent my Grandfather home for a spell of surgery and convalescence at some stage, and accompanying it is the small print of the x-ray and the letter that was needed to accommodate his passage. I find the whole thing a bit horrifying, but the children and Roddy think it is fascinating; and Roddy, being a man, said he would have done exactly the same.

But, there is another story, too; another war, and this time it is WWII. Our house here in France was bought in 1936 by a Parisian and his English wife as their summer residence. He was a physicist and when WWII broke out he was working on a specialist piece of equipment; he crossed the Channel on a fishing boat and arrived in London with the completed piece just 6 weeks before the Germans reached Paris,  and it is indeed true that without his work the allies would almost certainly have not won the Battle of Britain, and in all likelihood would not have won the war. During the years he spent abroad his wife moved south to the house and lived in it permanently with their children for the duration of the war; at the time the property had 15 hectares of agricultural land on which she grew vegetables and fruits, most of which probably supplemented the larders of the entire village. Old people we have met here talk of her ploughing the land with oxen, and having a store full of fruit. After the war the whole affair was developed into a full-time business, as there was so much produce.

A few years later the street on which our house sits was named after ‘our’ scientist, and when we bought the house we inherited with it the very desk at which he worked. It is a desk that helped make history, and it is the desk where Roddy now sits and works today. It’s nothing fancy really, but that desk has an incredible story to tell.

I am sharing this with you, lest we forget. To everyone who has fought in defence of our countries – whether it be a century ago or today, in modern warfare –  I have the utmost admiration and respect for you all. We all do.

32 thoughts on “THE WORLD REMEMBERS…”