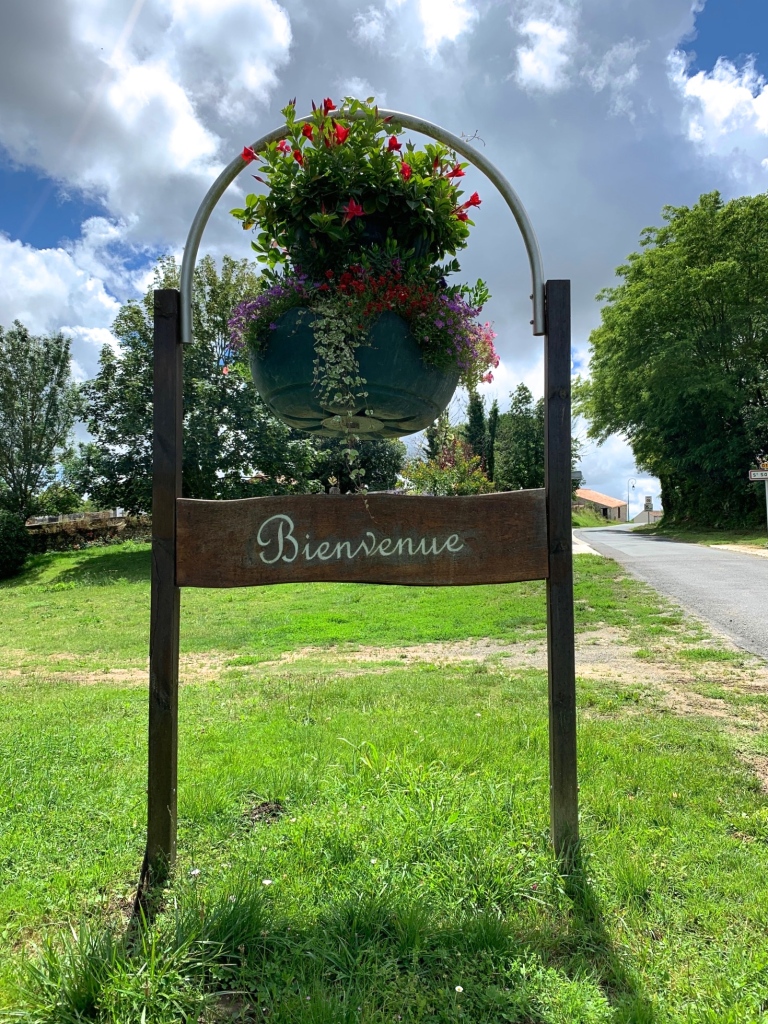 The village has a new bakery. Well, almost. We heard the news back in February, when it was scheduled to open three months later. But Coronavirus put a stop to that, and it’s only in the past month that we’ve seen the trucks of the maçons outside the property again, and the local carpenters working hard, giving the old building a facelift. Like so many in the village, I’m excited that we will be able to walk and buy fresh croissants and a baguette just down the road again. It’s been closed for two years and its reopening is scheduled to be quite a celebration!

I always feel rather privileged to live in in a village, it has its own unique way of life. Perhaps this is because I grew up on a farm in the middle of nowhere. But no matter what the reason, village life is special. Very small clusters of houses, what we would think of as a hamlet are called a commune here, and become a part of the nearest village. 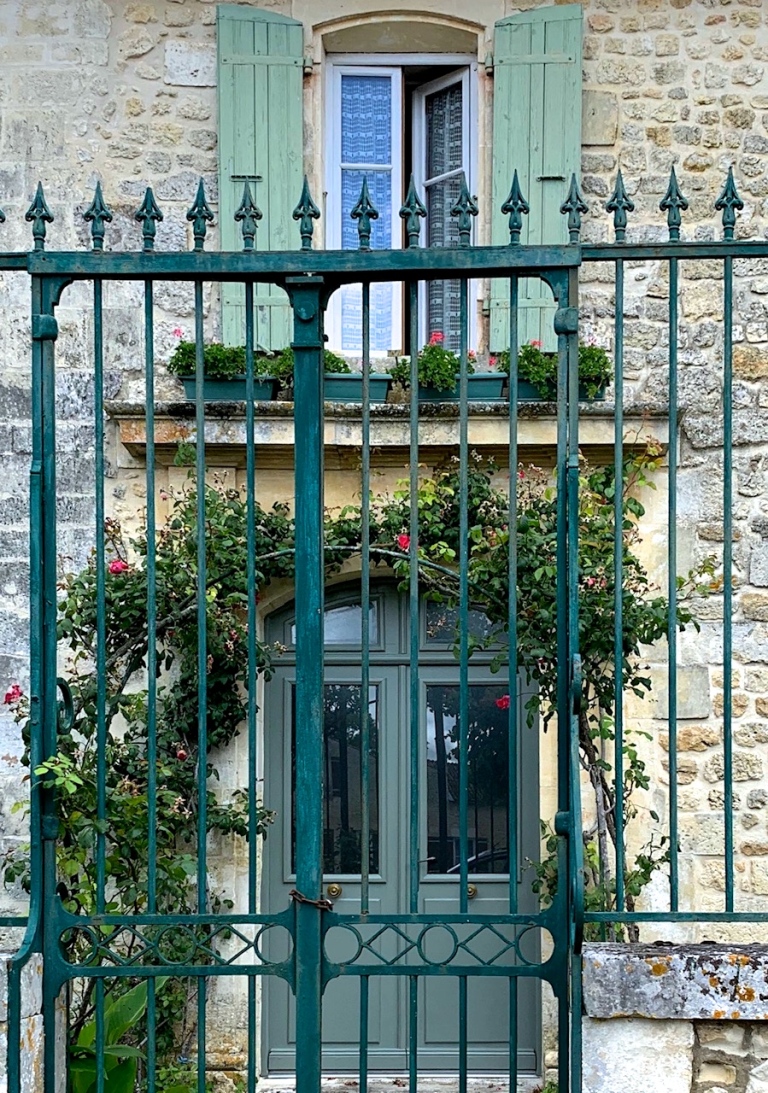 In the village there is a church, ours dates back to the 12th Century, it is huge and one can easily see how centuries ago it would have been a place of refuge for many during various wars. I love that we can see the church tower from our garden. The bells toll at midday and 7pm every day. In each neighbouring village the bell rings at a different time, so that in the olden days people would know the time. 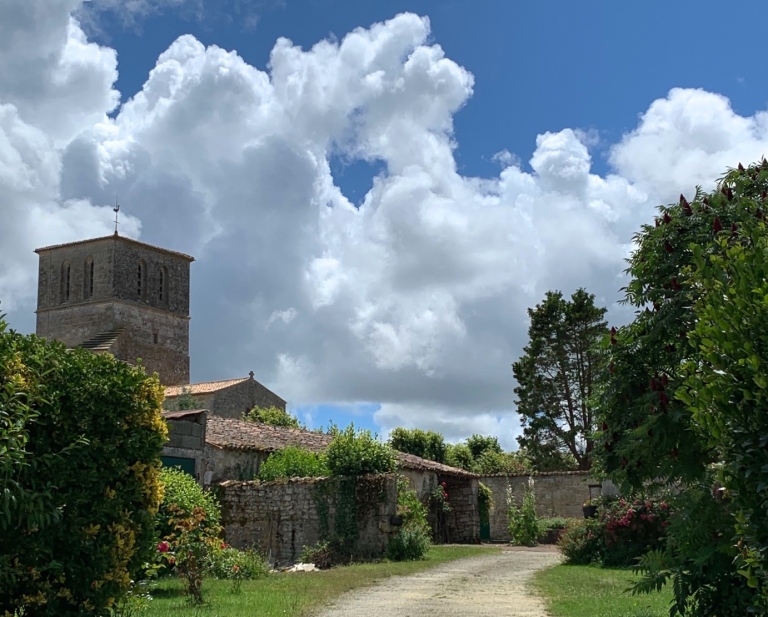 Then there is the Marie. This is the town hall and everything is run from here at this most basic of governmental levels. In fact if you want to know anything it is always the first point of call. We’re lucky that working in our Marie is a lovely lady who has known us from when we first moved here; for she helps serve lunch to the children at the small primary school after her morning stint at her desk in the Mairie. All this before her third job each day which is behind the counter at our very small Post Office, which is only open in the afternoons. Indeed, finding her available in three locations meant we were kept abreast of every facet of village life from early on.

So yes, our village has a little primary school with about 67 pupils. Our youngest two girls went there when we first moved here. We also have the post office and the all important Salle de Fêtes – the French equivalent of a village hall. Throughout France these often modern and typically ugly buildings are used for a myriad of purposes, including concerts, wedding receptions and annual feasts. Your local camera club, gardening club, yoga, dance and pilates class will also meet there. Once a year in early autumn there is a mushroom and fungi display held in ours which is always fascinating.

We also have les halles, the market hall, in our village which dates back to roughly the same time as the church, so around 1100!  Recently this has been completely renovated which took over two years. They were fastidious in keeping all of the old timbers, which piece by piece were taken away and treated and repaired. It was a painstaking job which we watched on a daily basis as we passed. This is now home to a Sunday morning market selling vegetables, oysters of course, meats, cheeses and one or two local artisans selling their handmade goods. It is also where the village Christmas party is held, along with various gatherings with aperitifs and music! 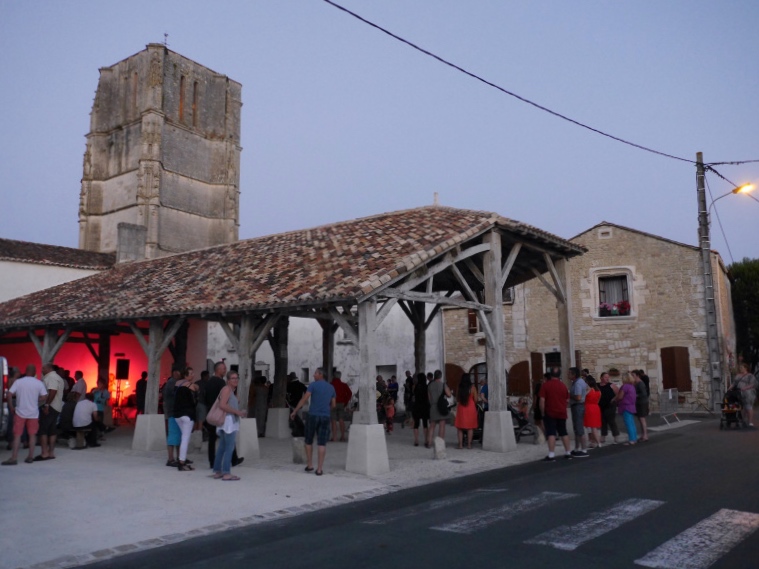 Most exciting for us is probably the reopening of our boulangerie. Because all across France, les boulangeries serve more than bread, they also dish out daily news, important community gossip, and they can provoke a camaraderie amongst people who do not know each very well. We also have a Bar/Tabac, another good place for local information and Sophie who is the owner is always keen to partake in a chat. This is where locals stop on their way home from work for their evening aperitif, propping up the bar and exchanging news. 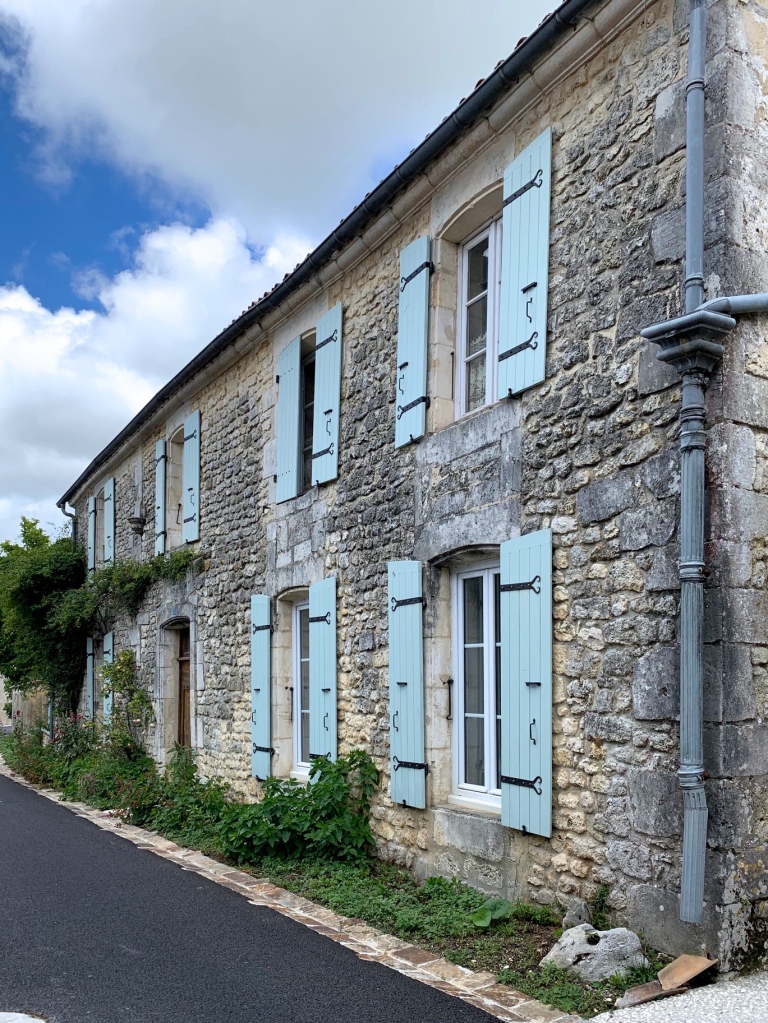 Village gossip in France is not, however, always gossip. Sometimes matters of great importance are discussed. And very often everyone knows what you are doing before you really even know yourself.  What goes on behind closed doors if often cause for great speculation!! 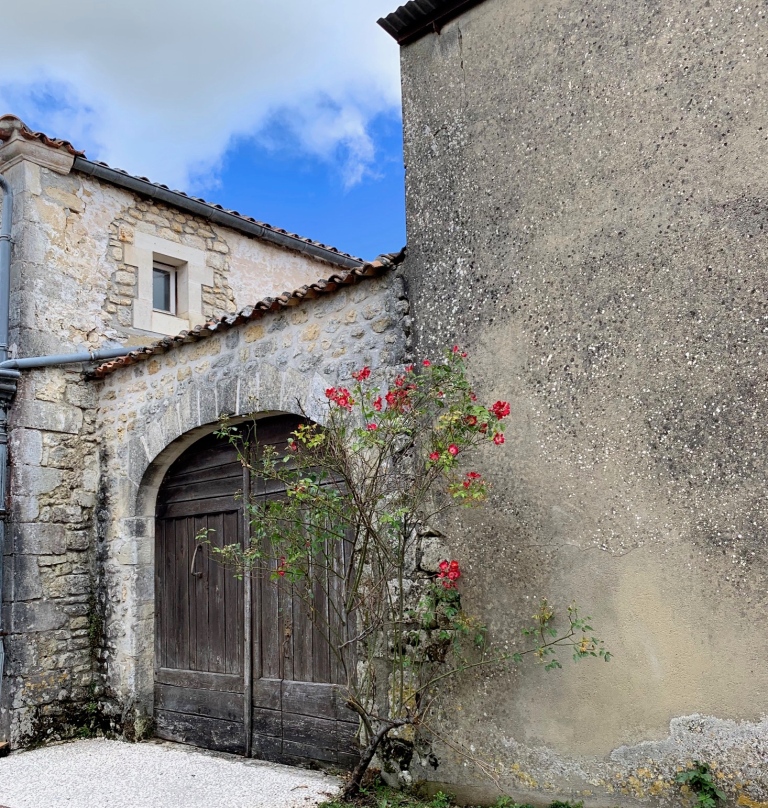 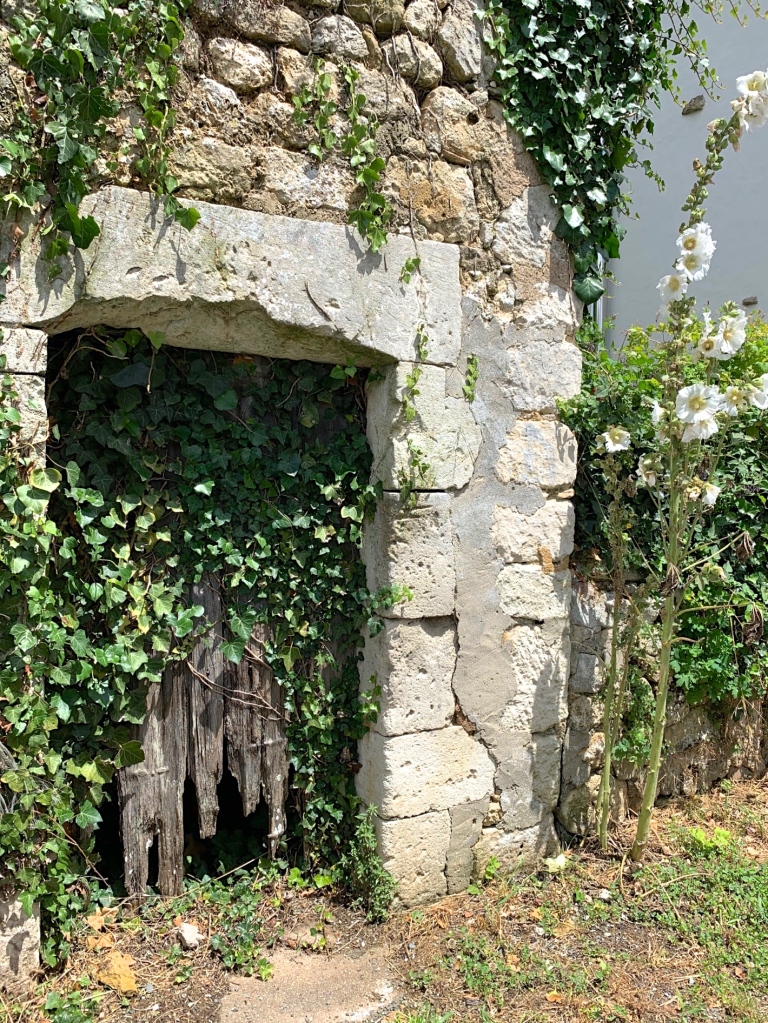 That is the way it is with villages!  You either love them and get involved and enjoy the feeling of a real community or you hate them. 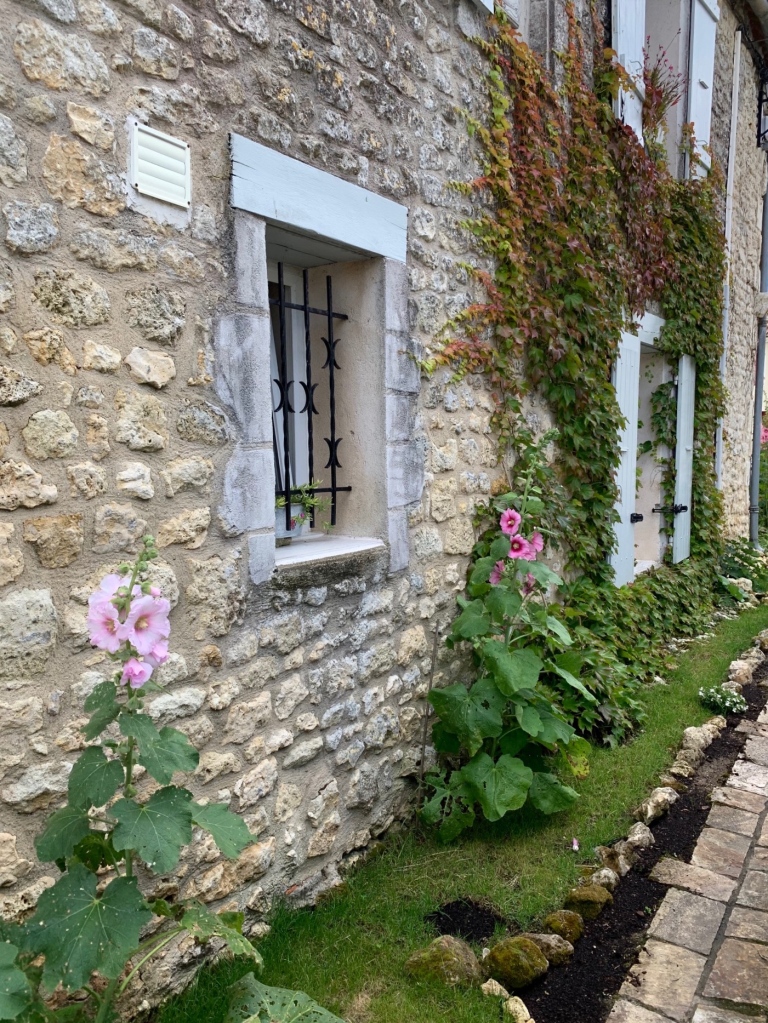 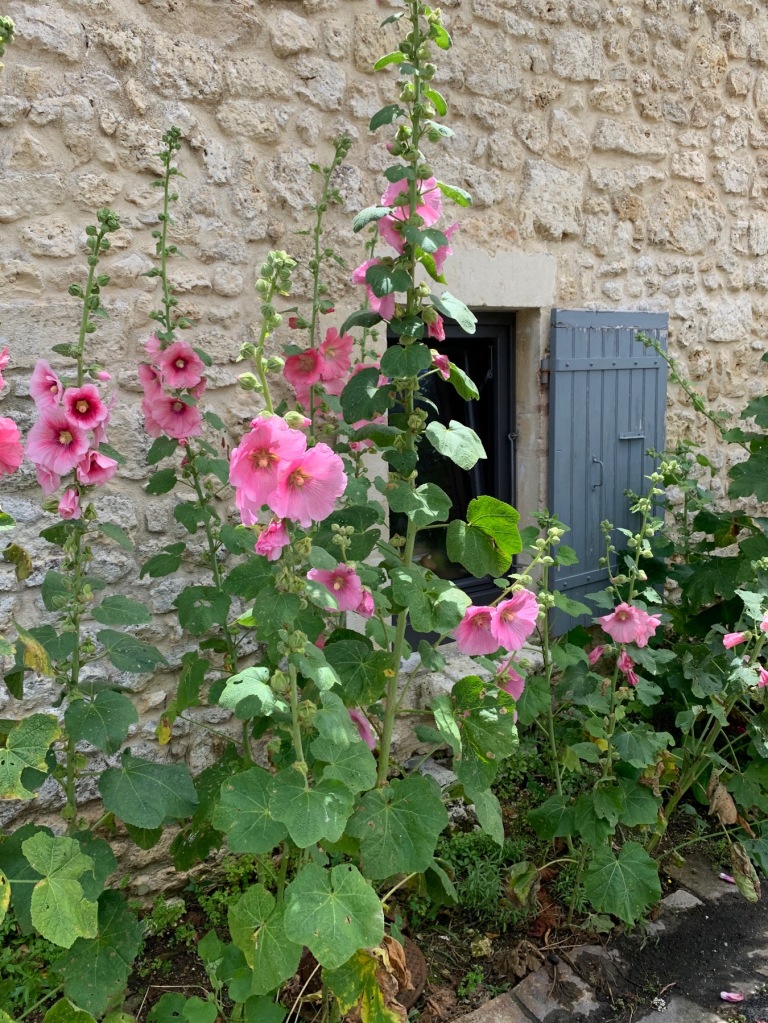 I remember when we first moved here the rumour spread around the village was that we were secret government spies. One evening over a glass of wine our neighbour, whom we were just getting to know at the time, kindly divulged this information! In another village, I know of an American family who with their three daughters were all supposedly, according to village gossip, suffering terribly with covid-19. Merely because they kept themselves to themselves, obeyed the rules and never went anywhere during the lockdown! They were fit and healthy and totally fine! That’s how life is and I think it is much the same in any small village anywhere, not just in France! But would I change it, never, I love village life. 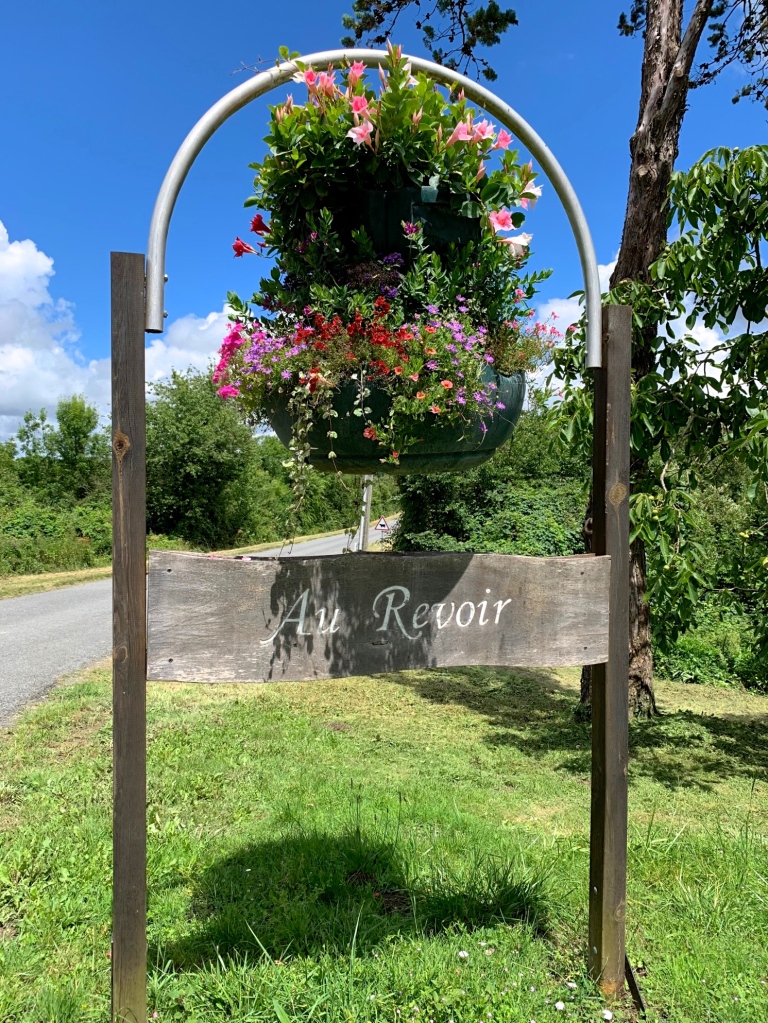 When your babies are no longer babies.
After months of planning, incredibly long days and a lot of hard work by the whole family another part of the house is done!
There is nothing quite like a walk here to lift the spirits and fill us with hope.
The kitchen is not finished and we’re still using the tiny old one but it’s so close that I couldn’t resist playing.
Walking back from the boulangerie through the village this morning. Cannot wait for restaurants and cafes to open up again. The thought of just stopping for a coffee seems like the height of luxury right now.
Sunday walk, everything’s so green 💚