Do you ever get those weeks when nothing goes to plan, when you have so much to do that you seem to be running around in circles trying to fit it all in? Well, last week was one of those for me. Every time I achieved one thing another demanded attention. I planned to write a blog post last Thursday and then I put it off until Saturday. Realistically that was never going to happen, so I thought Sunday would be a safe bet. But that day too came and went, time raced on, hours flew by, more things stacked up on my ‘to do’ list.

It turned out to be quite an eventful few days and I knew I just had to find the time to sit down and tell you all about it.

It all started with a storm warning on my phone last Thursday evening. We were put under an orange alert for high winds. Izzi, our eldest daughter, had flown in from London for a long weekend, we also had friends staying with us for a couple of nights. I remember we had an apéritif outside in the evening, it wasn’t overly warm and there was a keen breeze but the sun was shining and we strolled around the garden, stopping to pick and then savour the occasional raspberry and redcurrant.

Friday morning the wind had picked up, the sky looked ominously black and the clouds scurried past in an enormous hurry. Broken foliage littered the lawn, leaves flew past the kitchen windows as if it was autumn. By the afternoon it had reached its full strength. Gusts of over 145km/h were recorded.

We lost several huge branches from various trees, one plum tree was literally reduced by half, our front gates were damaged but nothing else. We were lucky compared to many. The big garden clean up would come next!

Saturday morning, as is so often the way after a big storm, dawned bright and sunny, not exactly flat calm but no longer blowing a gale. That is the morning we found Thanos, the hedgehog. We were having coffee with our friends outside when he was spotted on the terrace, unresponsive and lying in the sunlight: not the natural behaviour of a hedgehog. He had a wound above one eye which was bleeding.

Perhaps it was the storm that had displaced him and caused the injury, or maybe not, we had no idea, but one thing was for certain he needed some help, left in the open during the daytime would have been a sure death sentence for a young wounded hedgehog. We called our vet who told us they did not treat wild animals and gave us the number of the local wildlife rescue centre, not actually that local at all, but nevertheless we gave them a call, willing to set out on a long car journey.  But they were closed until the following Tuesday as it was a holiday weekend. We had no choice, either we let him suffer and take his chances or we did the best we could. We chose the latter option. 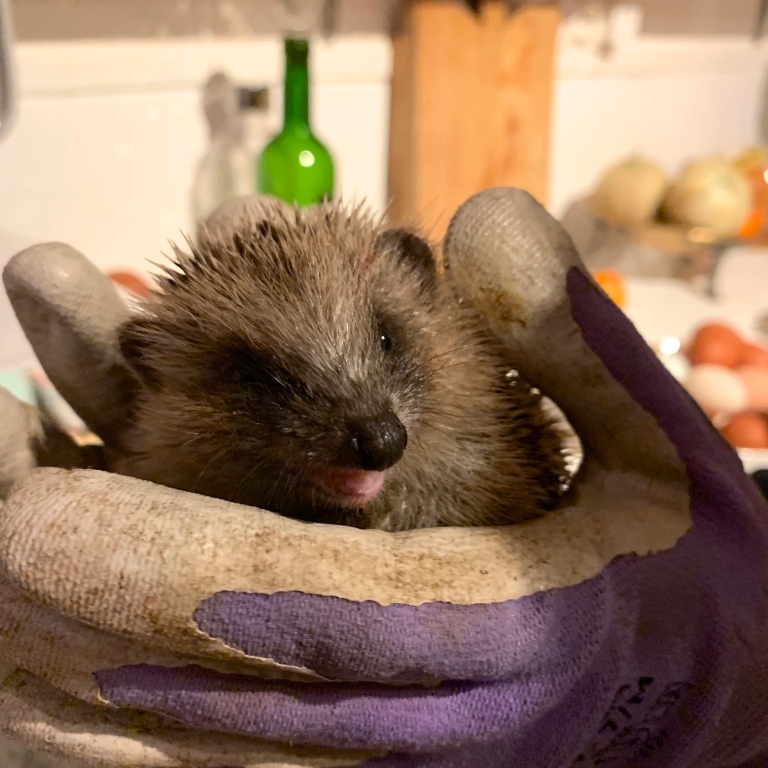 Thank goodness for Google. Millie, who has previously raised and treated quite a few baby animals, quickly did a lot of reading  and courtesy of the British Hedgehog Preservation Society she gleaned plenty of information. We weighed him to determine his age and learnt that he was about four weeks old and therefore technically referred to as a hoglet. We carefully treated his wound with Betadine (an iodine solution) 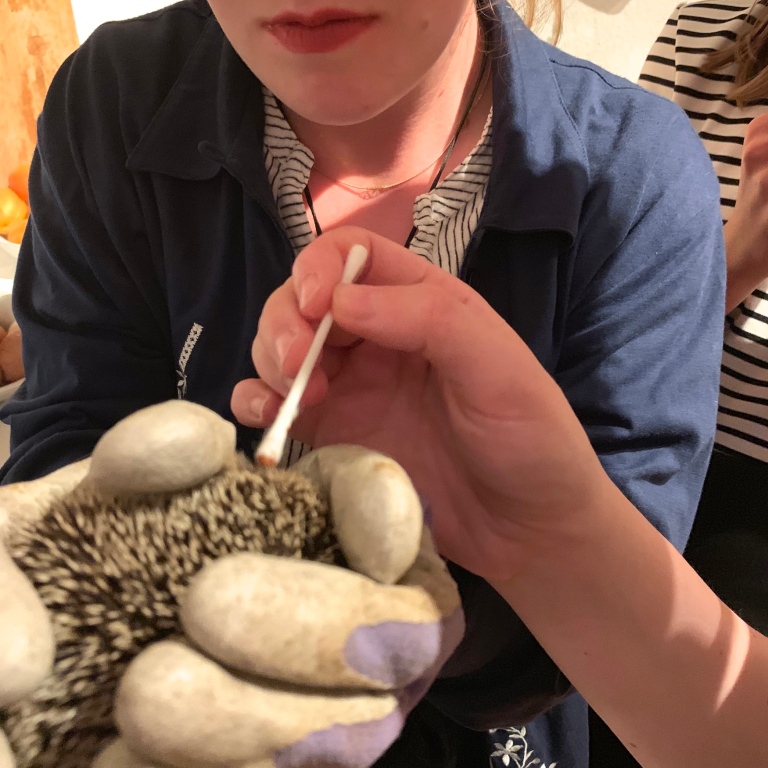 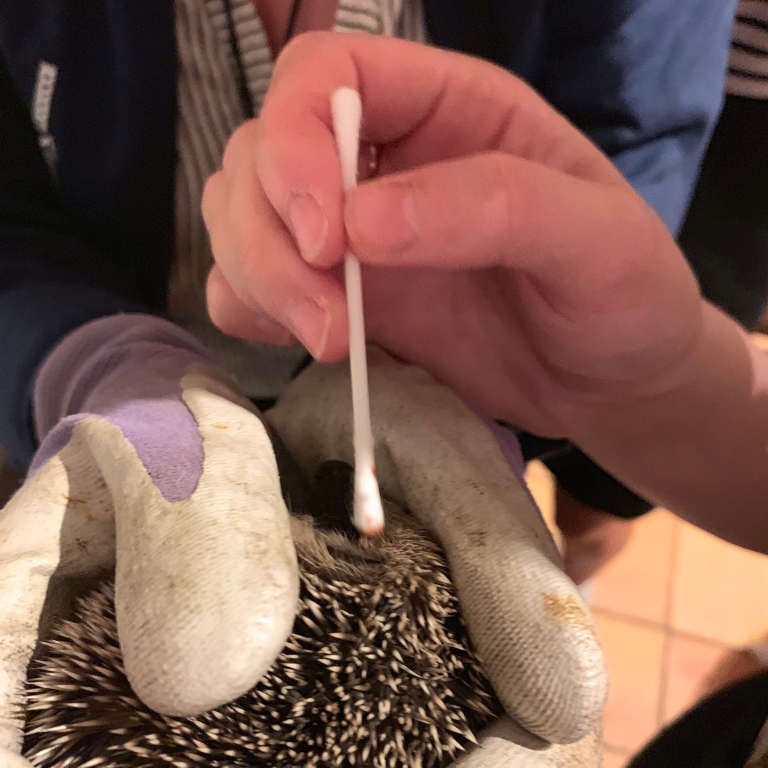 and then found an old cardboard box which we heaped with plenty of straw so that he could make a nest and put him in the guest bedroom and firmly shut the door. Out of reach of the dogs and Rory, the cat! During the afternoon we bought some canned kitten food, which we learnt is a great thing to feed them.

Meanwhile, we had a couple of birthdays in the family to celebrate and were heading out to lunch at the beach. I had found a new restaurant, a crêperie to be precise which I was keen to try. I had managed to keep it a complete surprise to those celebrating and the setting was sublime and the crêpes delicious, nothing extravagant but just as a crêpe should be. 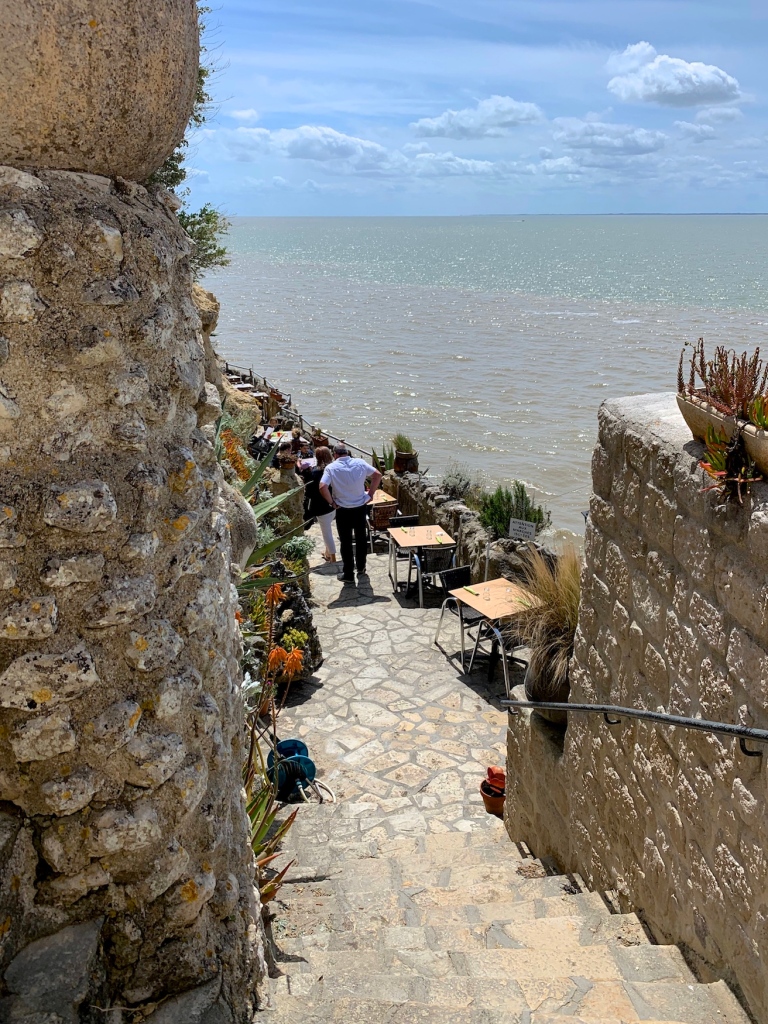 Afterwards we enjoyed a long walk on the beach nearby which was nearly deserted. 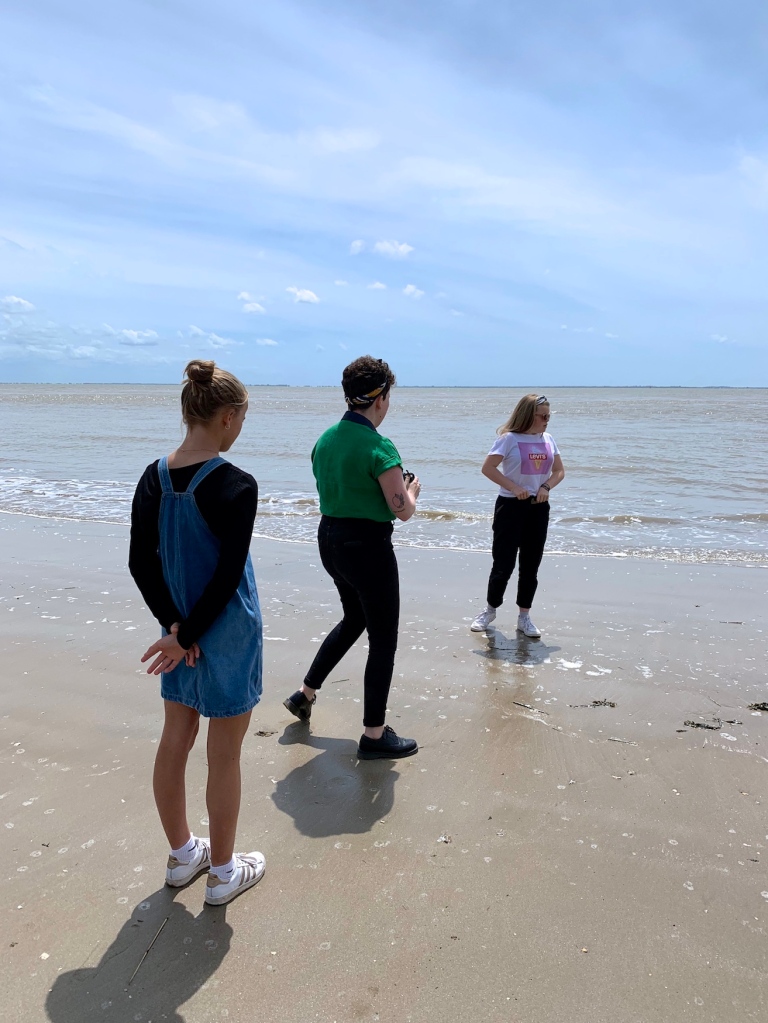 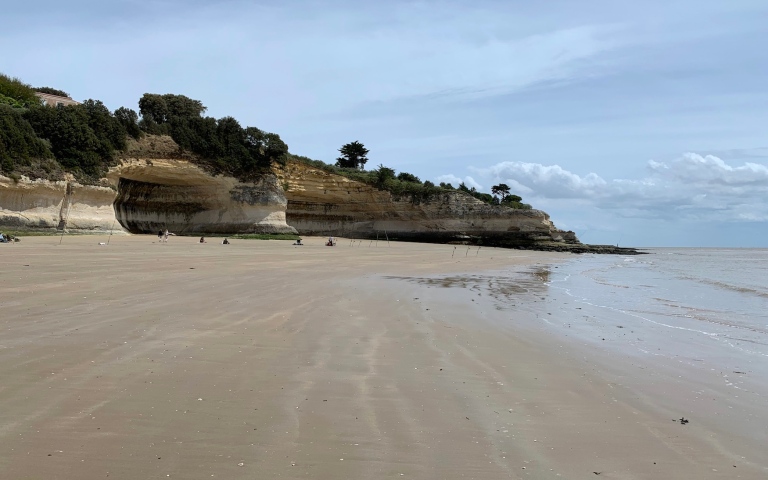 We watched a local fisherman lower and then raise his net from his traditional fishing hut called a carrelet and particular to this area. 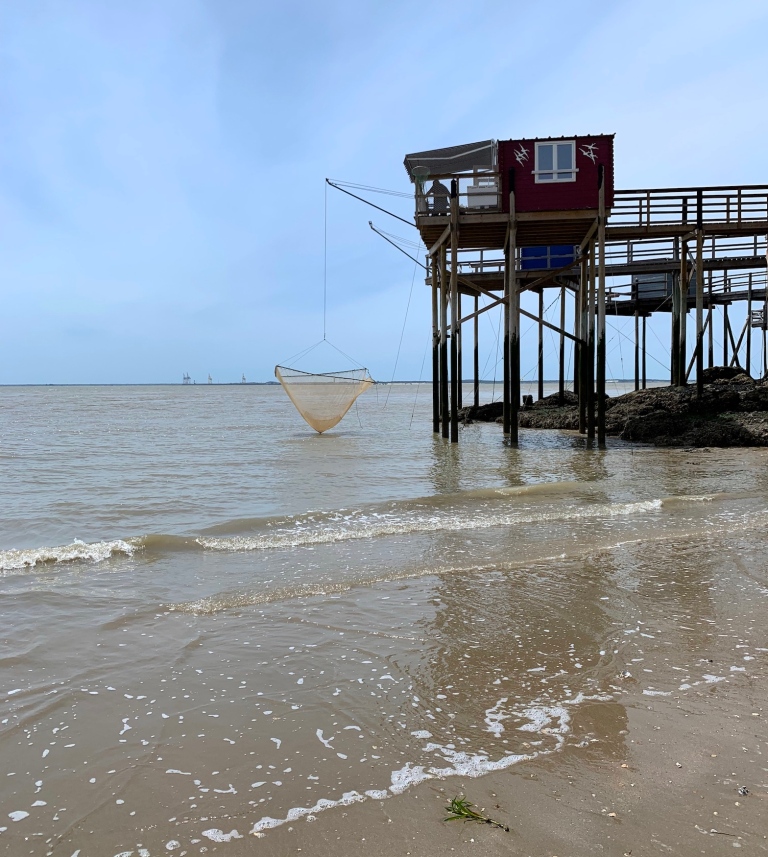 Later in the afternoon we returned back home, happy to be a family of seven all reunited for a short time once more. A Greek evening followed, with a feast that was fit for a king, prepared by Roddy and Izzi who are certainly les chefs extraordinaires. Originally this was planned to be outside under the stars, however we can alter many things but not the weather!

Meanwhile operation ‘Save Thanos’ continued. We gave him the kitten food and  left him undisturbed. Returning a couple of hours later we discovered that he obviously liked it as he had done the strangest thing. He had anointed himself with it. Apparently this is what hedgehogs do with new food, they literally cover themselves with it, the box looked as if it had been sprayed with kitten food! He on the other hand was perfectly content and as we thought about our beds and sleep, he was wide awake!

As the long holiday weekend continued the weather took a turn for the worse. The wind might have ceased but the temperature had plummeted and the rain had returned. This did not feel at all like June as the big garden clean up began. It was funny to think that just a couple of days before Izzi had commented that she had never seen the garden looking so fabulous, that calm evening as we strolled in the weak evening sun. Now it looked as far removed from that as could possibly be. I had hurriedly tied up some hollyhocks which had been flattened and revived flattened tomato plants. The potager looked more like a picture from November! 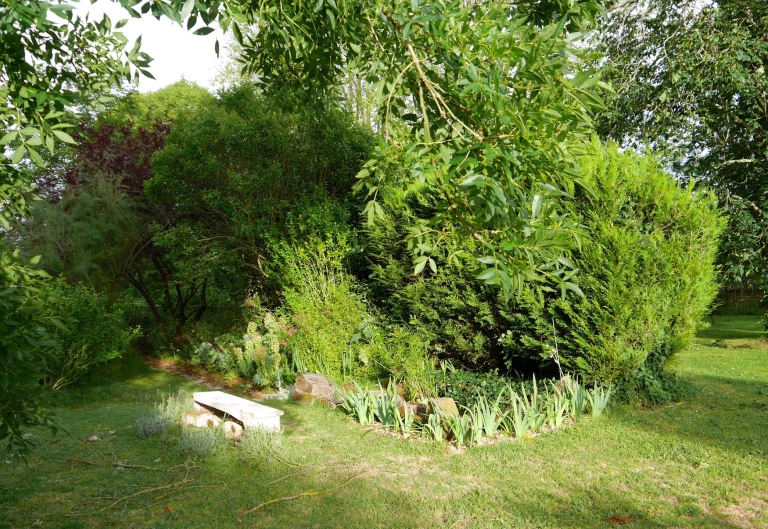 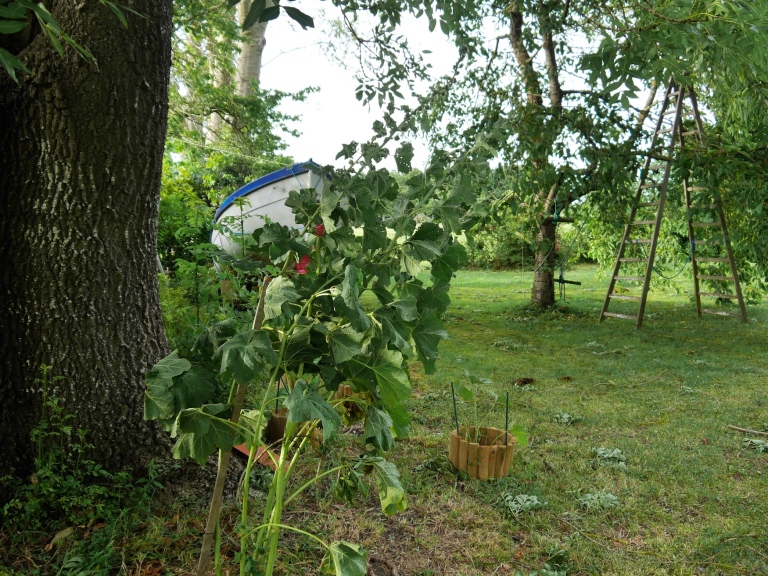 Thanos on the other hand was oblivious to climatic conditions, he was recuperating in five star luxury and appeared to be thriving on the attention. In the daytime he made his nest and slept. At night he came out to eat. His wound had healed and before we knew it the time had come to think about setting him free once more. Our garden is large and walled on three and a half sides and is incredibly safe. We have several hedgehogs who live here, we knew he would be ok and we also knew that it was the kindest thing we could do, to let him go and live as he is meant to. And so four days after finding him, we weighed him once more and then at nightfall, when the sky was quite black we took him outside once more. We let him loose at the very end of the garden, amongst a mass of old fallen leaves. We know hedgehogs live here, but we also knew it was an area large enough to accommodate many, he would be safe here. 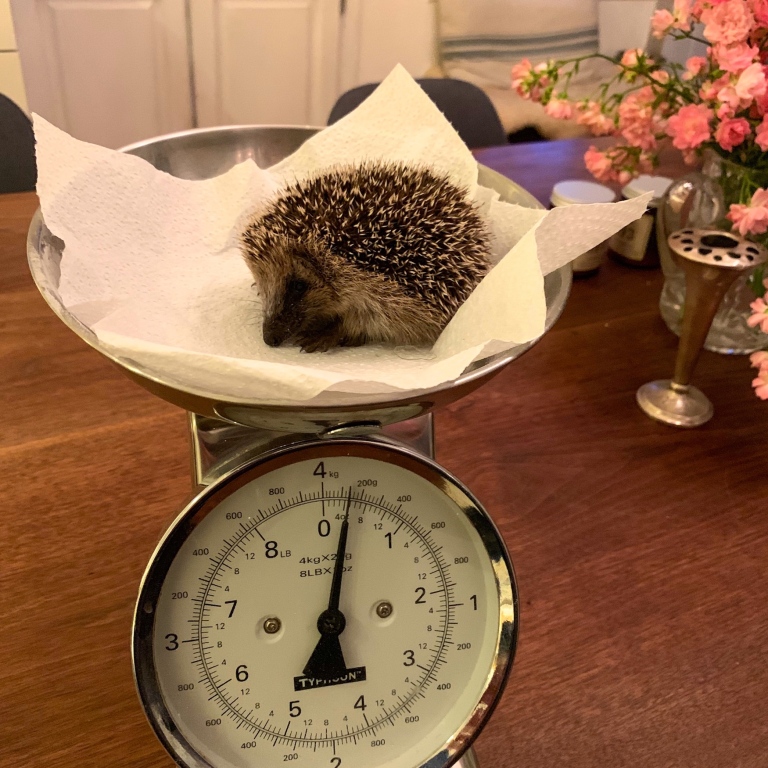 The next evening we saw him again, just as darkness fell. Perhaps he will remain with us always, perhaps we shall never see him again, who knows. But I like to think that we helped him and did the best we could.

23 thoughts on “A Weekend of Surprises”

And it’s done! Never before have we had a tree up and decorated the first week of December.
It’s really pretty miserable weather here, blustery winds and squally showers. Definitely a day for hibernating indoors beside the fire.
Every potting shed needs a chandelier right? 😂
If I have one word of advice for anyone designing a courtyard or starting a garden from scratch it would always be to include some evergreens.
Little corners of our kitchen, old and new mixing effortlessly together.
Now this is quite an entrance!