Which sets your heart beating a little faster? A rural home so beautiful yet bought for a price that will make city dwellers cry or an elegant pad overflowing with period features near the shops and the buzz of urban life where you can pretty much get anything you want in a jiffy? END_OF_DOCUMENT_TOKEN_TO_BE_REPLACED

Growing up I always dreamt of skating in Central Park, but at the time I had never visited America and my dream was simply fueled by movies I had seen – it seemed to represent the perfect Christmas scene. I’d forgotten all about that dream until we bought our house here, however, and then during our first Christmas I saw that there was an ice-skating rink in Rochefort.  It seemed that decades later my wish was to finally come true, although the country and setting were different. In reality though, the magic is exactly how I imagined it would be. There are laughs and giggles, the smooth swoosh of skates on ice and everyone has rosy, glowing cheeks from exertion in the chill air.

With some considerable work and effort the Place Colbert, right in the heart of Rochefort, is transformed into an open air rink for most of December and half of January.  Lots of Christmas trees are brought in and little wooden chalets appear selling local delicacies and crafts. 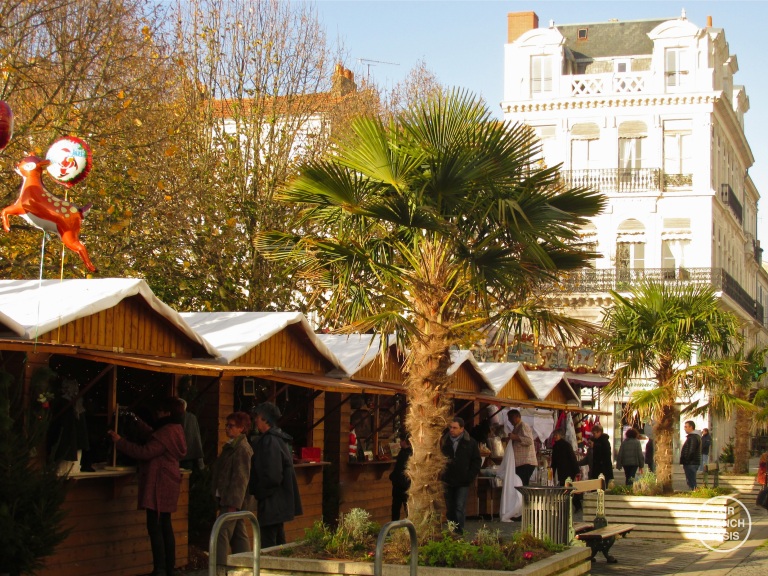 Christmas here does not explode in a blaze of colour at the end of November, rather it slowly evolves as December unfolds; each day a new light will appear, a new stall at the market, a new delicacy in the boulangerie. Streets and shops are decorated, Christmas trees appear in the windows of houses, wreaths welcome the visitor or passerby at front doors and green garlands of fur with red bows replace the red geraniums of summer in window boxes. It’s all very subtle, but it wets the appetite and feeds our anticipation and excitement; it’s not everyone’s idea of a perfect Christmas, but I rather like it. 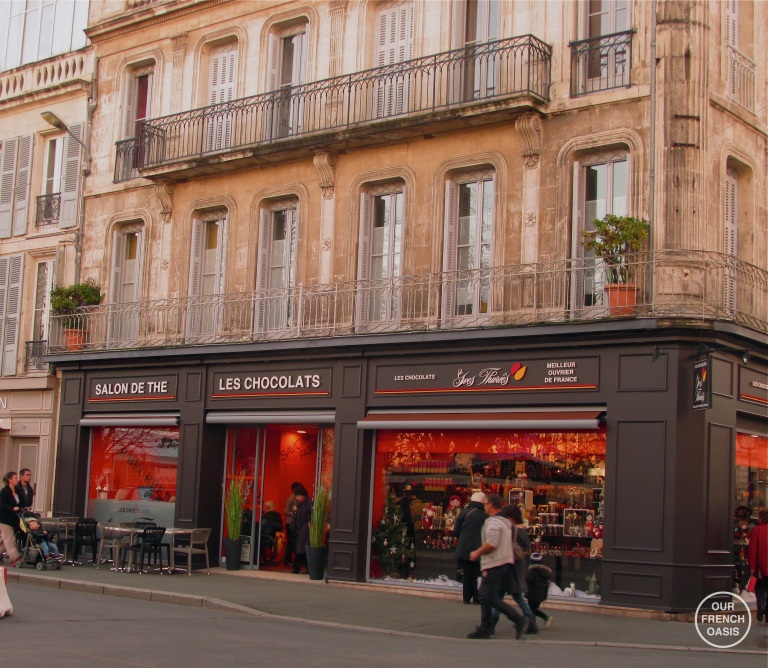 and in Pont-l’Abbé the ancient archway under the old prison, a road I travel twice a day on the school run, is lit up to perfection. 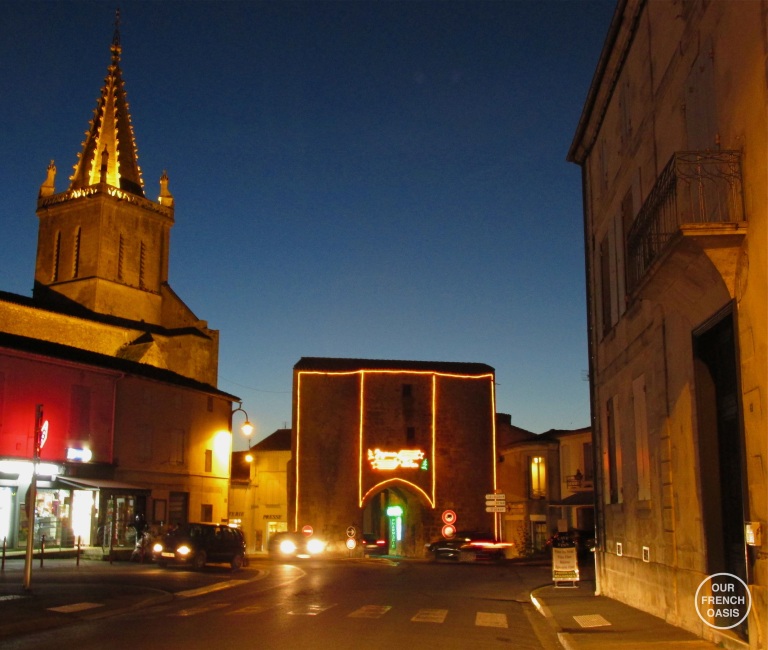 It’s all part of the build up to Christmas in our little corner of France. 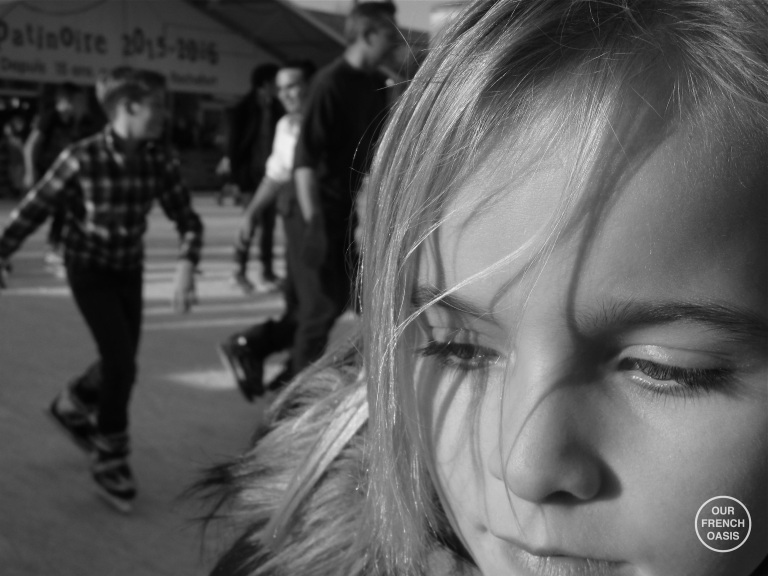 Last week we had friends staying who had never visited this area of France before and they quite literally toured the Charente Maritime from north to south, and from east to west. They marveled at our incredible beaches which stretch for miles along the Atlantic coast, backed by sand dunes and pine forests; they loved the Île d’Oléron perhaps even more than the Île de Ré; they had great fun in Cognac, Royan and La Rochelle; they even found time to visit local châteaux and some street markets.  But every evening I would ask them, “Have you been to Rochefort yet?”, and the answer was always an apologetic “No”.

Every day they meant to, and on their last day it really was their plan to go and have lunch there and idle away a few hours. Alas for Rochefort, the sky was the clearest blue we had seen for a week and a last day at the beach won hands down. It was unfortunate that they left without having set foot in our lovely old town, just a mere ten minutes away. So yesterday, without them knowing but on their behalf, we decided to become tourists for a few hours and see Rochefort afresh through the eyes of a visitor. As it was a Wednesday the children had no school in the afternoon and so we headed to our favourite restaurant for lunch armed with my camera and discussed where to go.

Yvonne and Neil, this photo tour of Rochefort is for you and hopefully next time you will see it for real!

To start with, we parked opposite the grand imposing Baroque post-office,

and wandered down the Rue Audry-de-Puyravault past the Eglise St Louis. The church was originally built in the Neo-classical style in 1662 on the site of the old Capuchin Chapel but was rebuilt as it stands today in 1835. 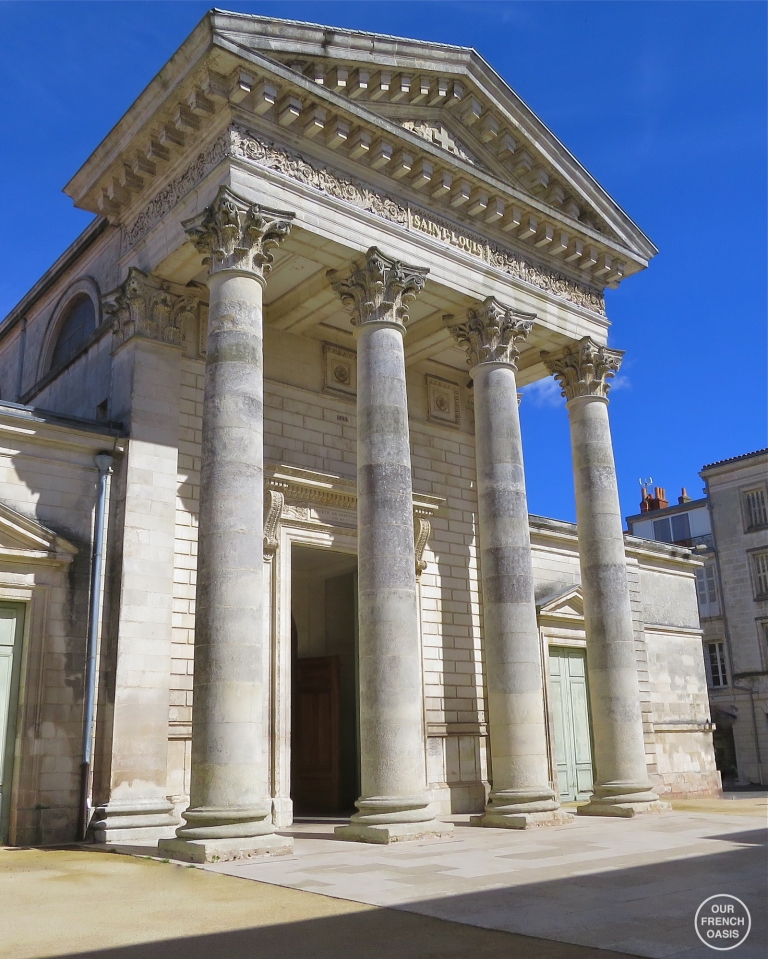 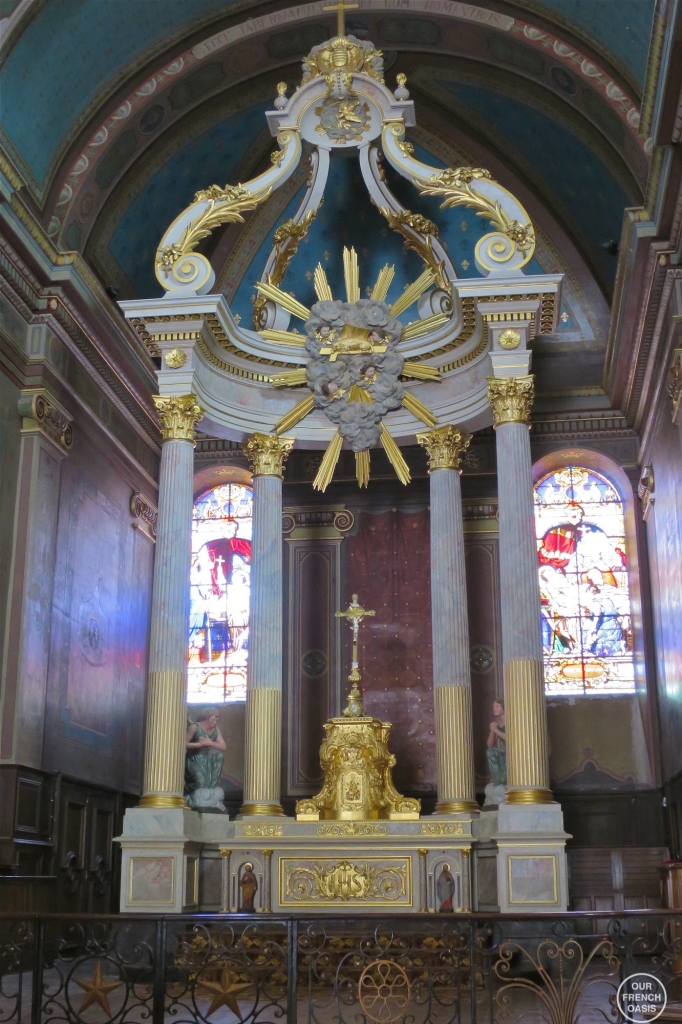 From here we walked across into the Place Colbert

and stopped for some lunch at our favourite haunt, La Terrasse Colbert

The Place Colbert features a beautiful fountain built in 1750

and there are numerous places to sit and watch the world go by, to drink a tea or coffee or sip an apéritif

Rochefort is a 17th Century town chosen by Jean-Baptiste Colbert as a place of “refuge, defense and supply” for the French Navy. It was Louis XIV who was especially keen to get a shipyard built in Rochefort – he was worried about the power of the English navy and instructed Colbert to “Make it big, make it beautiful – and make it fast.”

The result of all this military planning is that Rochefort today has a rather grand feel with its wide boulevards and straight streets. The town is often overshadowed by its seaside neighbours of La Rochelle to the north and Royan to the south, and as a result is often neglected by visitors to the area which is a great shame as it is both stylish and enchanting.

The town Hall, known as an Hotel de Ville in France and not to be confused with a real Hotel, is an imposing building on the western side of the Place Colbert. 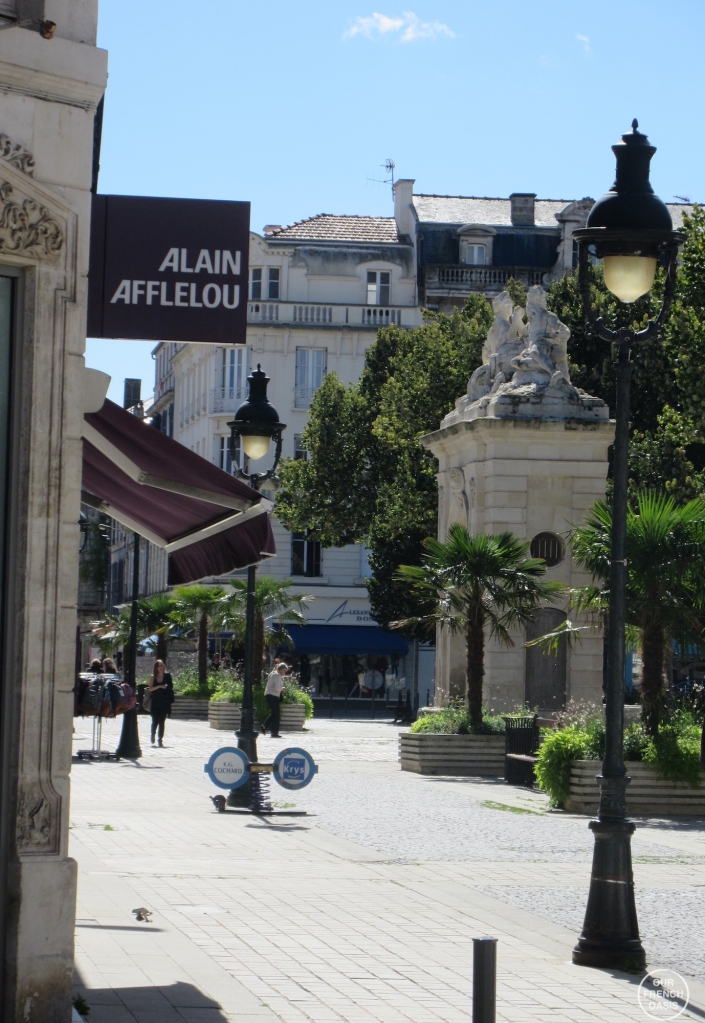 and then headed down the Rue de la République 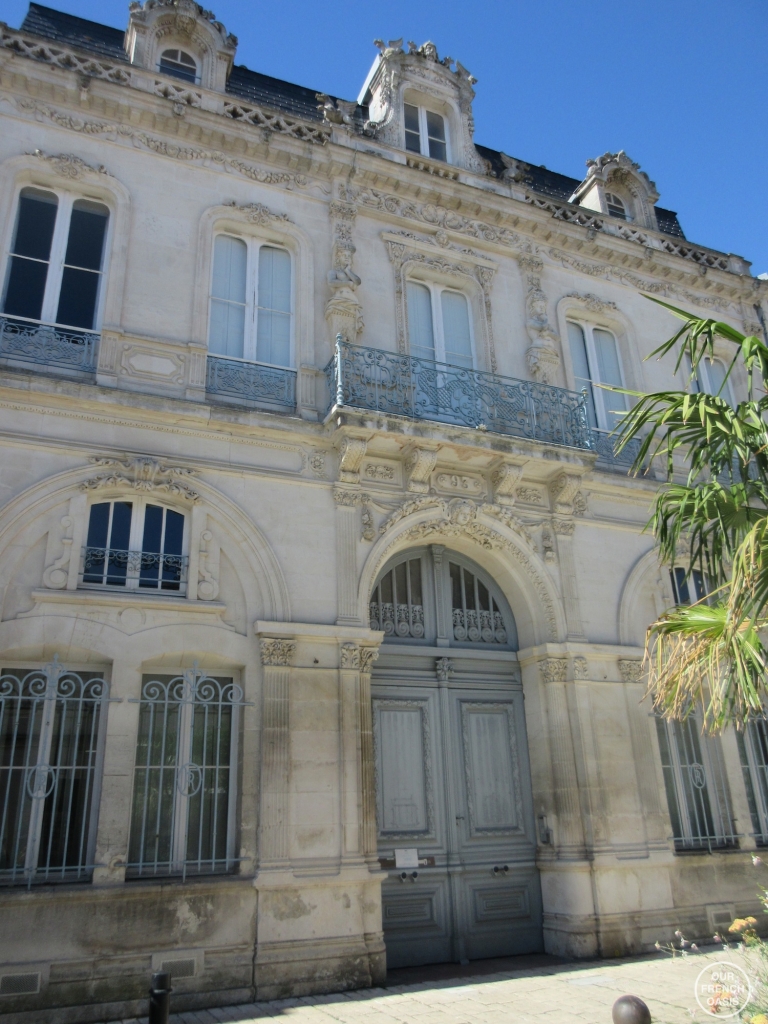 past offices and private houses

and down to the Corderie Royal, which as it’s name suggests used to be where ropes were made for the navy.  At the time the building (which was started in 1666 and completed in 1669) was the longest building in Europe at 473 metres in length.  The navy needed to be supplied with ropes of 200 metres long, hence the great length of the building. Today it is a naval heritage museum. 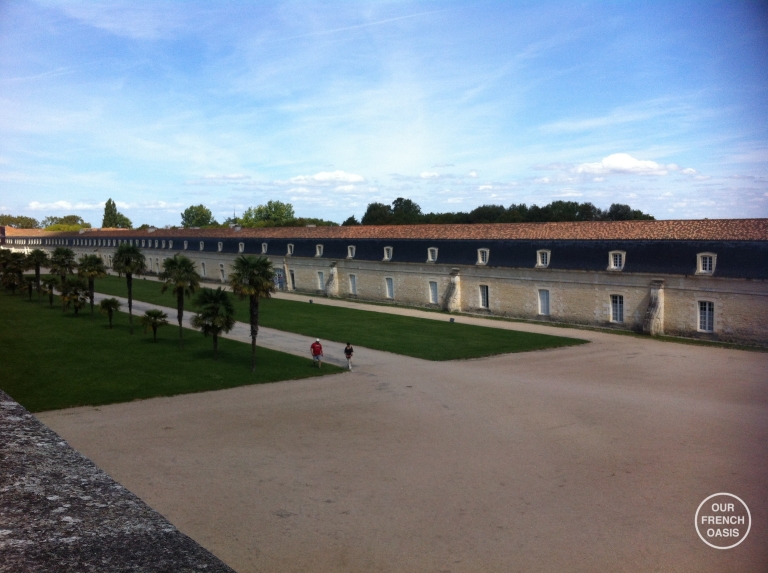 We passed tourists taking a more leisurely view of the town 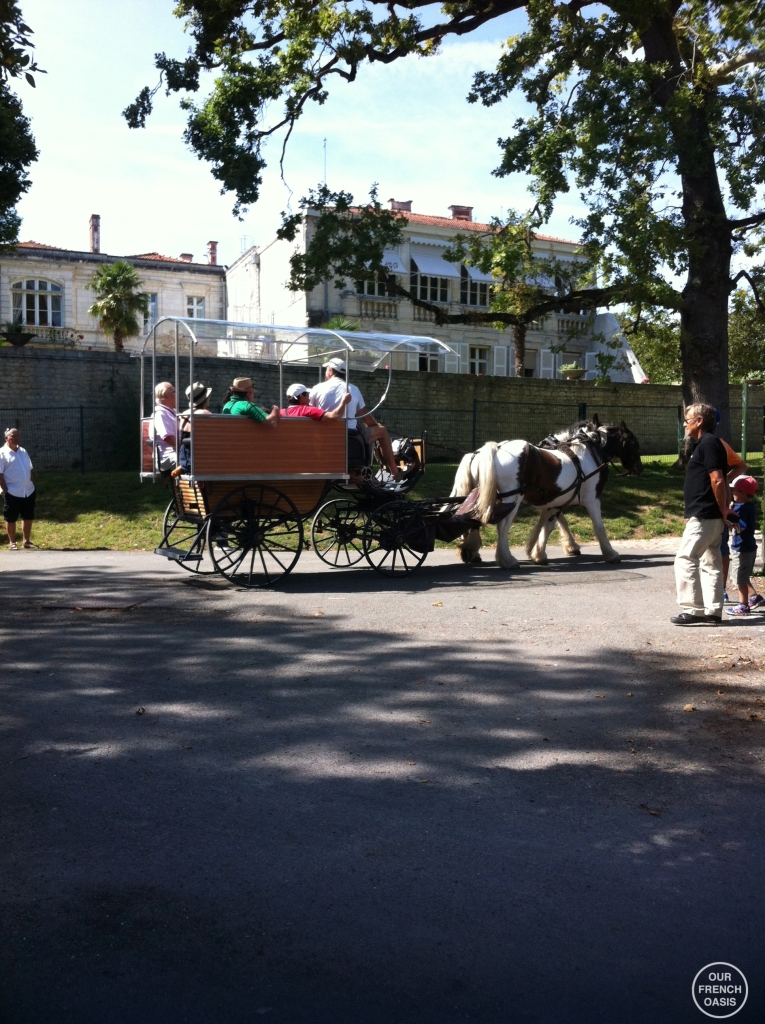 and continued to the formal French gardens

overlooking the River Charente and the surrounding farmland, which borders the town in many places

where the girls pretended to be Napoléon and Joséphine 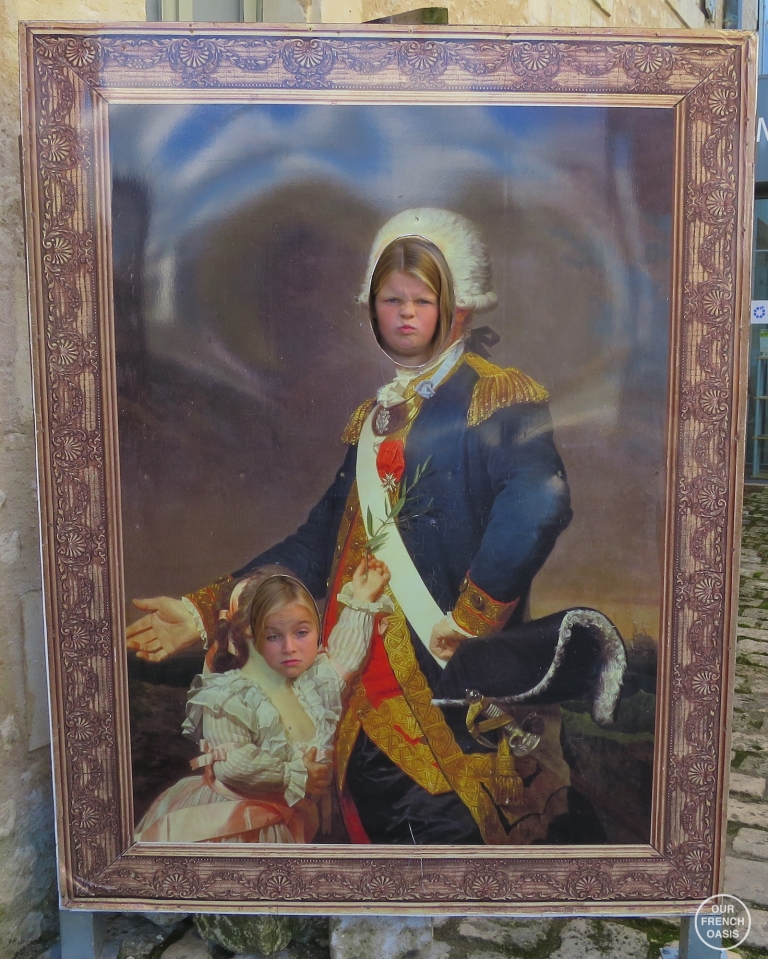 Finally we stopped by the Hermione, a replica of the ship which became famous when she ferried the French military officer the Marquis de Lafayette to the United States in 1780 for support to the rebels in the American Revolutionary War. She was grounded and wrecked in 1793. In 1997 her replica was started in Rochefort. She was completed last year and in April 2015 she began her return voyage to the USA arriving safely on the American coast in June.  In August she returned to Rochefort amongst many celebrations. 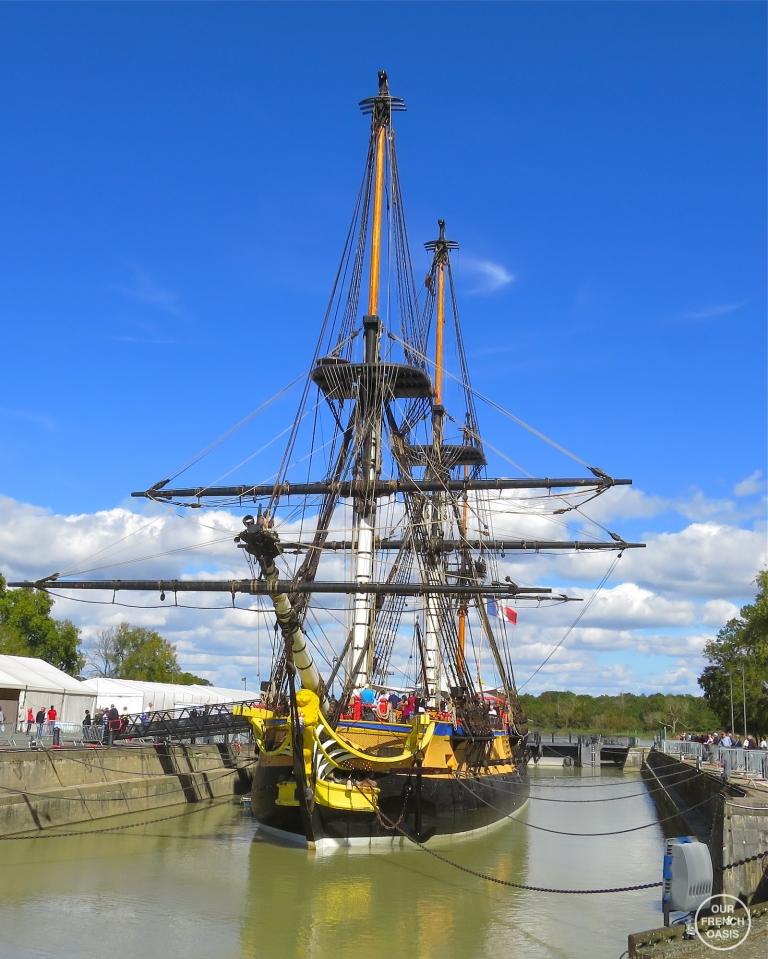 There are plenty of places we didn’t have time to visit as the girls had to get to their tennis lessons, but it was great fun being tourists for an afternoon and we will do it again, somewhere else next month.  If there is anywhere in particular someone wants to see let me know, it’s always a fabulous excuse to see somewhere new, or in this case re-explore somewhere we already knew rather well!