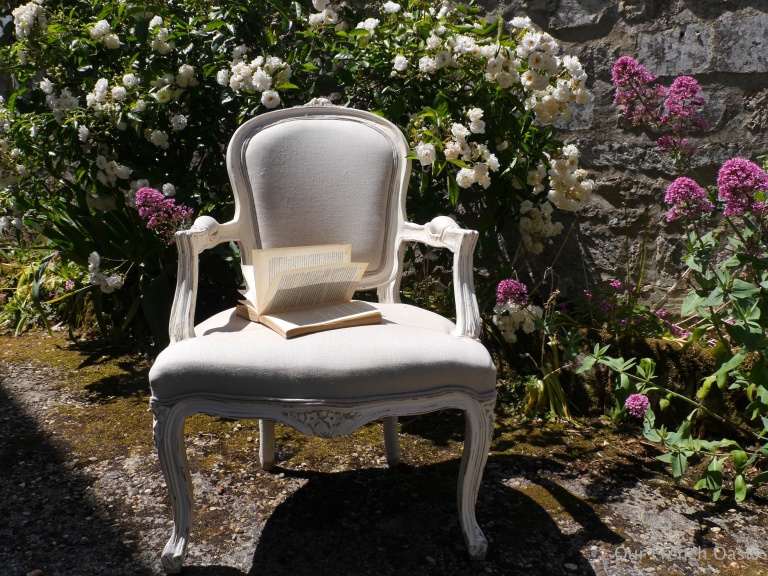 It would be most unusual to find a house in the French countryside that did not have some seating outside; somewhere to read, to eat or drink, or simply to rest a while and pass the time of day.  Taking a stroll in any garden always fills me with a sense of calm and so it is only natural to want to linger and perhaps find a quiet spot to sit and spend five minutes in complete peace. It gives us a time to think and reflect or just to be at one with nature.

The start of the week blew in the first canicule (heatwave) of the year; temperatures soared to 32C (90F), and as always it changed the way we were spending our time outdoors. Instead of appreciating the warmth of the spring sun on our backs and finding a warm sheltered spot beside a wall, we instead suddenly needed to seek shade as a refuge from the heat, something which led me to consider our current options for garden repose.

Seating in the garden doesn’t have to be elaborate, it can be something as simple as this swing, one of our favourite spots under a tree in the chicken garden,

or it could be a rock on which to sit by the water and watch the sun-bathing frogs. 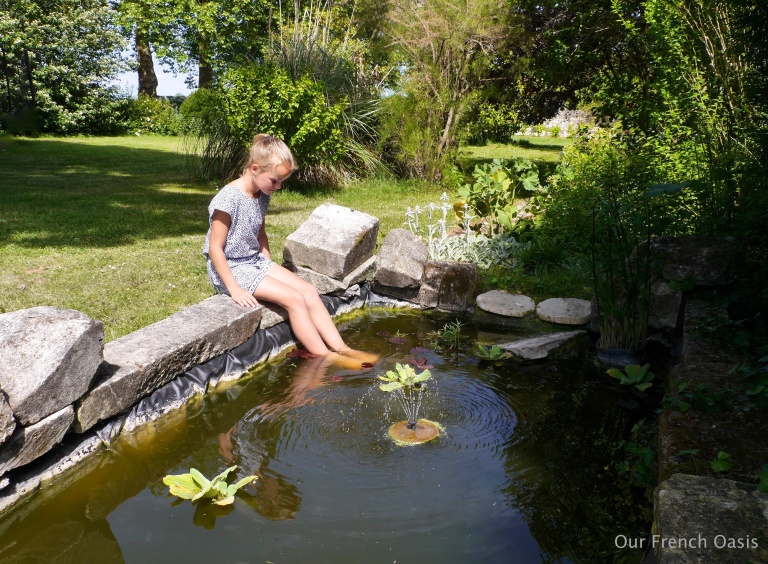 In a typically French manner I also think everything should look as if it has been there forever and nothing should be pretentious. There ought be some old stone and old wood, or something recycled. These areas need to demonstrate an air of relaxed comfort without showing off or shouting about their existence; they should be little enclaves of  down-to-earth shabbiness that create an atmosphere of confidence that welcomes anyone to sit and stay, to slow down and switch off. Indeed, they should speak to you and cosset you with the things you want to hear , “Sit here, there’s nothing to do, you’ve worked hard so close your eyes for a minute. No rush….”

I also like my outdoor living spaces to be a little on the romantic side with plenty of good old fashioned charm. Decay, rust and peeling paint all add to the ambience, and create a patina of memories; some real, some imagined and perhaps some in the making. 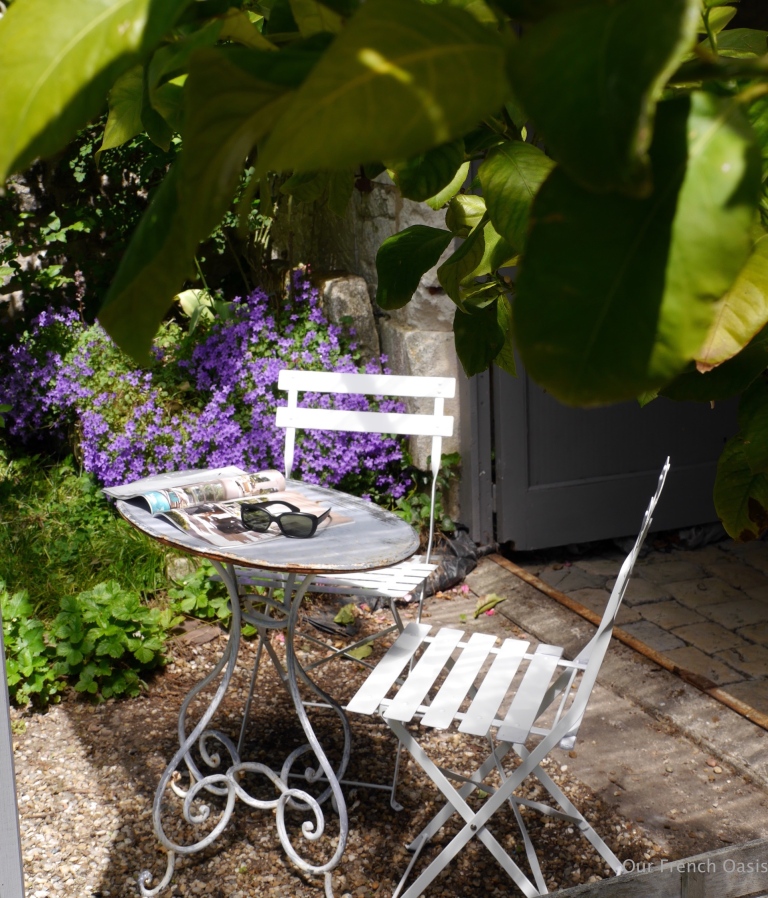 We’ve moved things around on the terrace this year. The dining-table is now directly outside the kitchen, with the natural canopy of the lime trees (the common lime in the UK or linden in the USA) acting as a huge green shade parasol. Save for the odd small green spider abseiling down to lunch, it’s a terribly refreshing spot to eat.

Look up, it’s so pretty!

but we still needed more seating, so Roddy set to work making a new outdoor wooden bench out of some old decking. It’s actually a touch of genius, as the back is in three parts, each of which can recline in several positions or be moved altogether and placed at one end to make a chaise-longue or day-bed. With the addition of some simple cushions we now have the most comfy of places to sit or lie at a fraction of the cost of anything available in the shops. 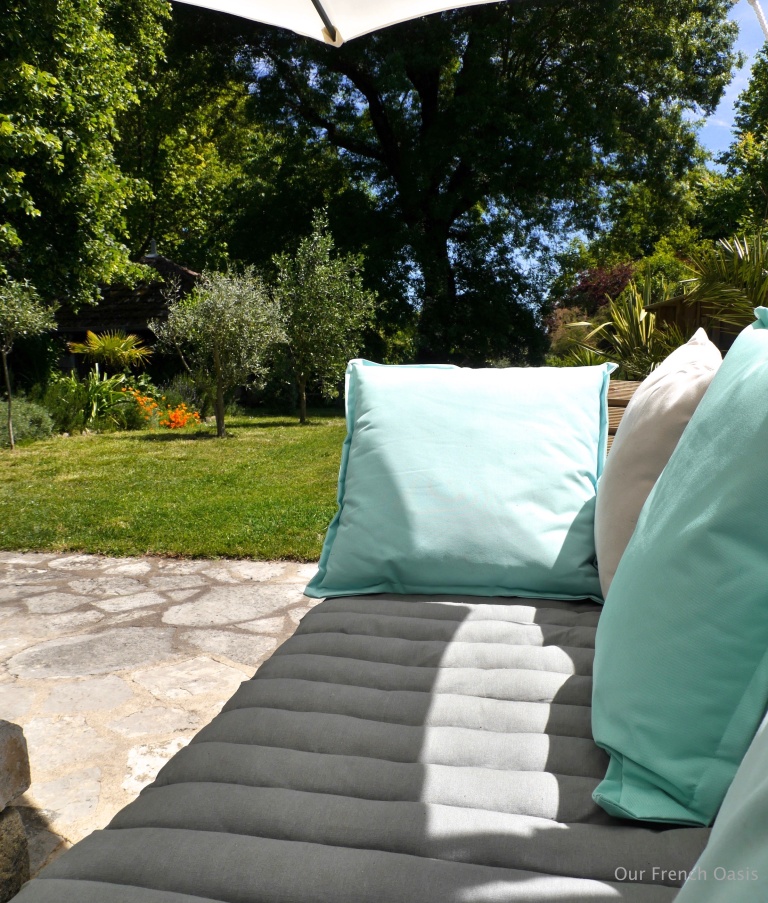 Next we needed to replace our small coffee table with something more substantial and I came up with the idea of using some of the old stone we have scattered around the garden. My initial suggestion was met with raised eyebrows and much scepticism. “Exactly how are we going to move the stone?” both Roddy and Millie asked with raised eyebrows. “That piece you want to use probably weighs about 200 kgs!” he added.

I was sure it couldn’t be that difficult with three strong and able bodies, but I was quite wrong. It really was too heavy. However, I am not one to admit defeat easily and Roddy knows this only too well. He put his ingenuity cap on and dug out the sack wheels and a thick pair of gardening gloves, resigning himself to some heavy lifting. We all helped, we heaved away, manoeuvring great slabs of stone, until we found exactly what we wanted. Two solid blocks made excellent bases and then with a final effort we hauled the large slab I’d earmarked on top. But it wasn’t quite finished, the table was slightly unbalanced and so we had to readjust the bases, another half hour of heaving and adjusting wooden wedges!

Next, out came the pressure washer, and when all was done I added some simple geraniums in an old terracotta pot. We had made ourselves a sturdy table, solid enough to stand on, dance on, and do what you will – it certainly isn’t going anywhere! Quite ironically whilst flicking through a French magazine just a few days ago I saw something similar for sale at a cost of just over 1000 euros. I felt that tiny prick of smugness, I had come up with the idea first and it had cost us nothing! 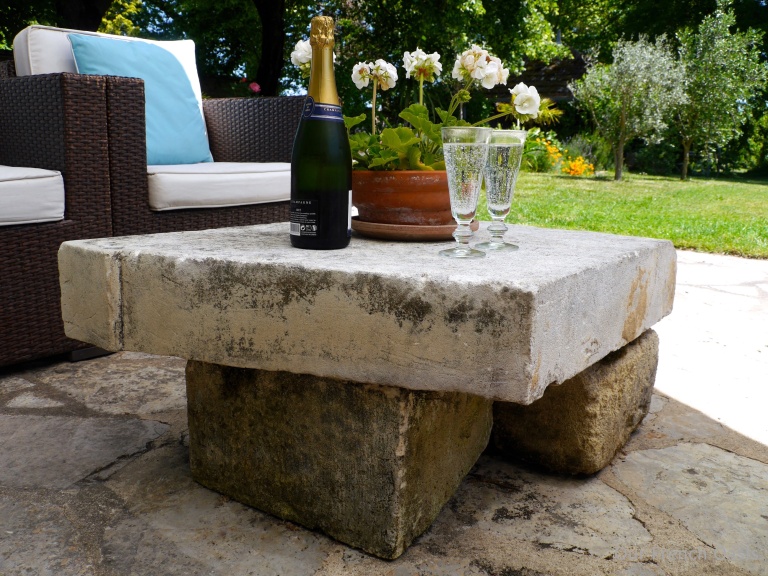 As you’ll have gathered by now, I’m very much for creating an enchanting outdoor area that needn’t cost a fortune! 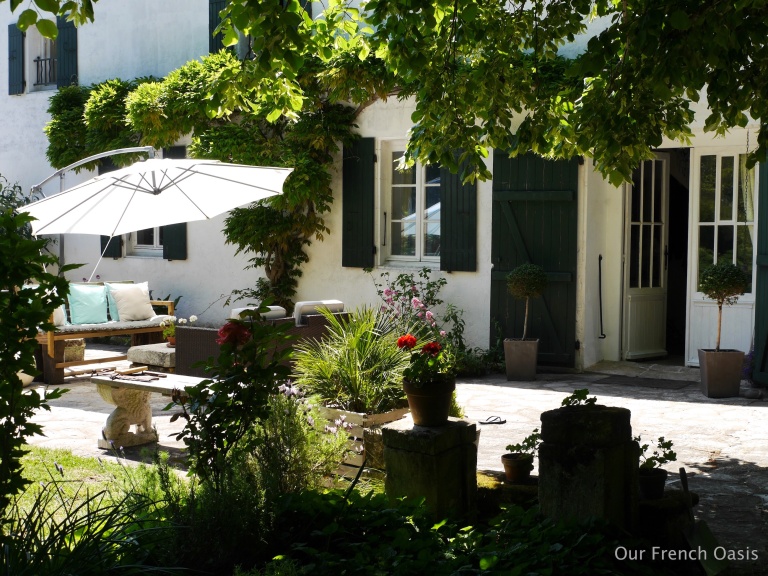 Other things can easily be introduced as simple effects, like a coat of paint on a chair or a fence, or some plain or colourful cushions. A string of fairy lights can delight at dusk and into the evening, and plenty of tea lights in old jam jars or the typical French glass yoghurt pots also add magic to those summer evenings. Of course, you can’t forget the charms of a whole range of plants that look so wonderful in natural rustic containers. 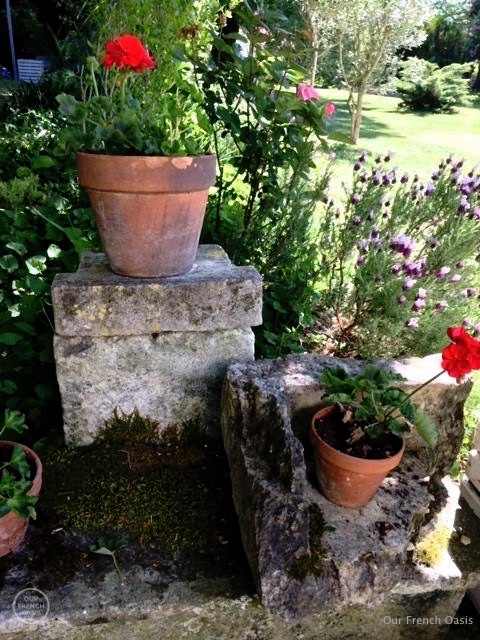 If you’re a fan of water like me, but you don’t have space for a real pond, make a scaled-down version. We found an old cast iron tub at a local brocante. We scrubbed it out, raised it off the ground and filled it with pond plants. This year we will add a couple of goldfish too – safe in the knowledge that the cats can’t get at them and neither will the heron. 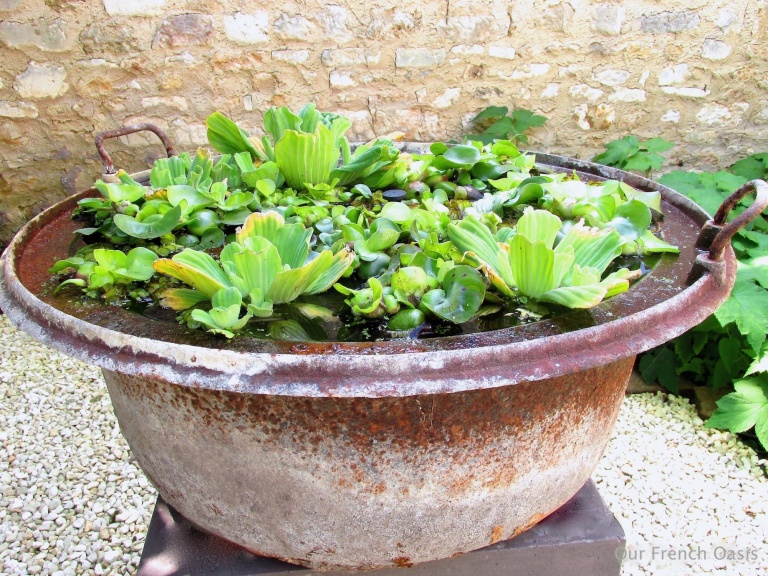 And talking of small spaces, I have a fabulous idea to make a tiny outdoor space appear much larger. Space is not something we lack here and so this is a thought that I have dreamt of but never actually put into action. I’m a huge fan of small gardens, terraces and balconies. If in another world I was a landscape gardener I would love to specialise in these miniature outdoor spaces because I think there is so much that can be done; one can afford to focus on the minutest attention to detail and the layering of different foliages.

The trick I’d love to use is the addition of an outdoor mirror, hung amongst the leaves and draped in climbing plants. We use mirrors indoors all the time to make rooms look larger, so I thought why not do the same outside? A mirror not only makes any space look so much larger, it also bounces natural light around, brightening even the dullest of spaces.

I took an old mirror we had in the barn outside and put it in our small courtyard to show you what I mean –  I was going to move it around and try out various places this morning, but as luck would have it, today the rain came down! Two days of wet weather are forecast and I’m actually pleased, so are the farmers and growers. In fact, you’d be hard pushed to find anyone complaining around here as the spring has been exceptionally dry. Already there have been plenty of mutterings about the possibility of a hosepipe ban as the water table is well below average for the time of year. 48 hours of steady rain can only do good.

But back to the mirror – so Roddy stood in the rain with that bemused look on his face that simply says his wife is utterly crazy, while I photographed from under the safety of an umbrella. The idea certainly seems good, but I need to play some more. Hopefully for anyone with a small space it might just give you an idea of what might be possible. 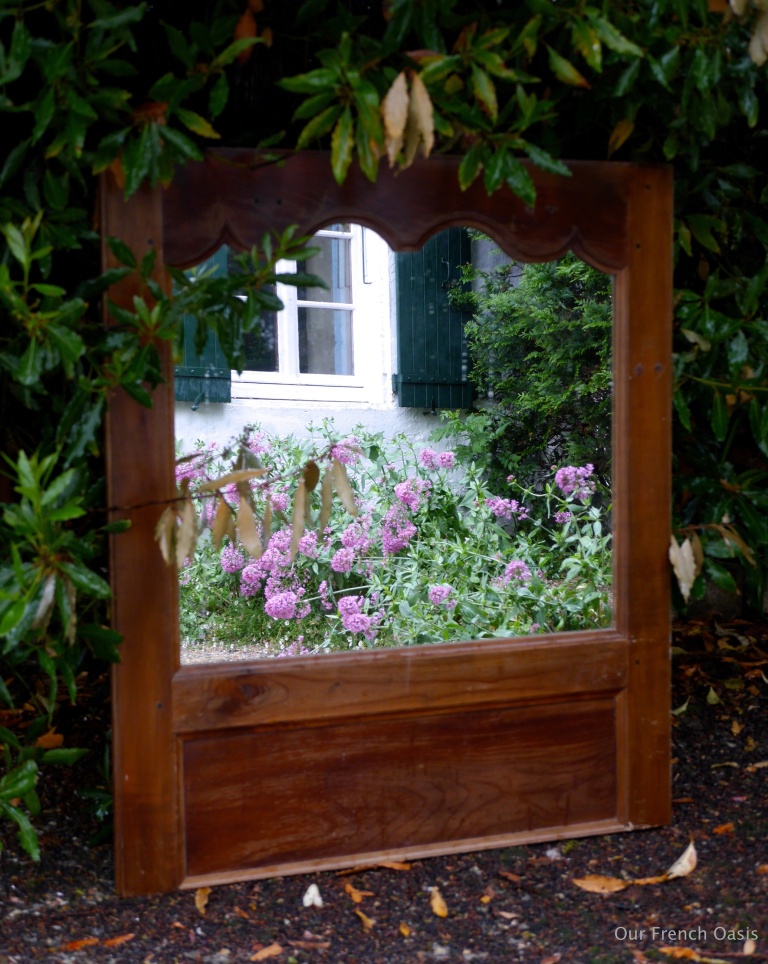 I also hope I might have given you one or two other ideas, even if you simply need a place to rest for a few minutes whilst gardening, where you can sit and admire your handiwork while someone you love fetches a glass of wine or a cup of tea.

Whether you’re a human being, a cat or a dog, I think it’s vital to find somewhere special where you can spend some time outside. 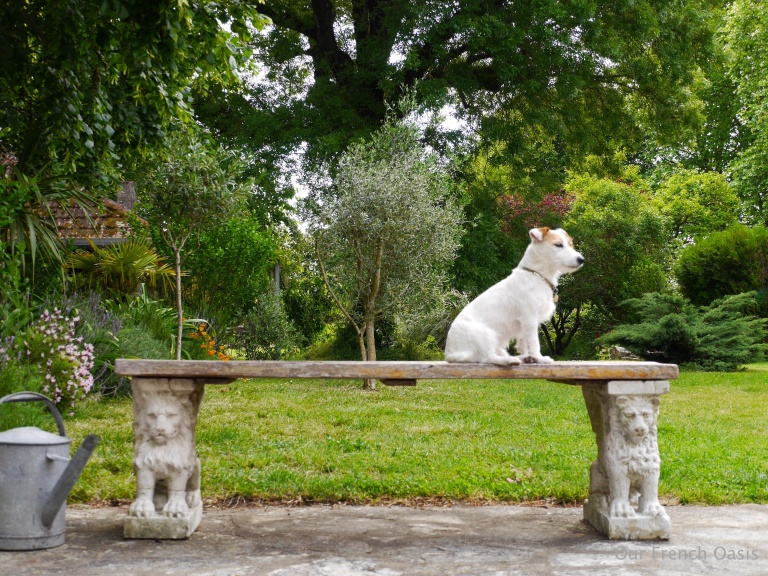 Walked past just the prettiest town house ever today. 😍
How do you store your cutlery when there is limited drawer space and well quite frankly nothing is standard size!
Loving this rain but wish it wasn’t raining!
Creating this Mediterranean style courtyard garden from stone we have found lying around, (discarded in a far corner of the garden and covered in weeds so as almost hidden) has been back breakingly difficult but so much fun. And it just shows what you can make from scratch!
Kitchen update. So close now!
Bringing the outdoors in.