When we first moved to France, I think we all secretly harboured a desire for a sort of ‘Swallows and Amazons’ existence, for a life that would be one long dreamy ride through quiet backwaters and along sun-dappled valleys until one returned at night to the warmth of a fire in an ancient fireplace set square in the crumbling wall of an old farmhouse.

Sadly, no matter how much we might want to fulfil those fantasies, it is not realistic; there is work to be done, bills to be paid, schooling for the children, homework….the list is endless. As for the dilapidated farmhouse, pah!  We all know that while rattling old windows and creaking doors might be part of the french romantic dream in the height of summer, it is far less pleasant in the depths of winter when a fierce north-easterly is howling outside; as a result our carefully bought old abode has had to have something of a modern day facelift which I will be showing you in another post. But despite the pressures of modern day life, and even if our five savvy high-tech children like to take full advantage of what the internet offers, we all agree without doubt that some of our very best days and hours are those spent enjoying totally organic natural pursuits.

We know a little orchard not far away, where no one has lived in the adjoining house for several years and no one seems to pick the apples. Year in and year out we have enviously watched the fruits as they have fallen each autumn and rotted on the ground. Last weekend, we passed the orchard on a bike-ride, and despicably we decided to sneak ten feet through the rusted open gate and take an apple; they were the sweetest and best of any apples we have ever tasted, perhaps all the more so for they really were forbidden fruit. Roddy and I felt like naughty kids again as we quickly pedalled away with the children as fast as we could in case an unseen pair of eyes were watching us. Roddy said he’d had a flashback to the early 70’s when he and friend were once pinned to a plum tree by a gaggle of geese when out scrumping one day, he didn’t know which they were more scared of, the geese or being caught!

Another thing we planned when we moved here was to always grow plenty of our own vegetables and eat our own fruit. We never had illusions of being totally self-sufficient,  and we don’t keep any farm animals aside from the chickens, but we did want to supplement the amount of food we buy from the market and grocery store. One lunchtime last weekend we started chatting about how we would cope for a month if all the shops closed down and we had to live totally off the land. We looked around, sure we would be hungry, but after a few minutes of noisy hearty discussion we realised we would survive. We have eggs, we still have plenty of fruit at the moment and enough vegetables; we’d probably have to go foraging for nuts, mushrooms and berries (just the sort of thing we love doing), we’d all lose weight but it would be certainly possible, a diet rich in vitamins and minerals – a very healthy diet. 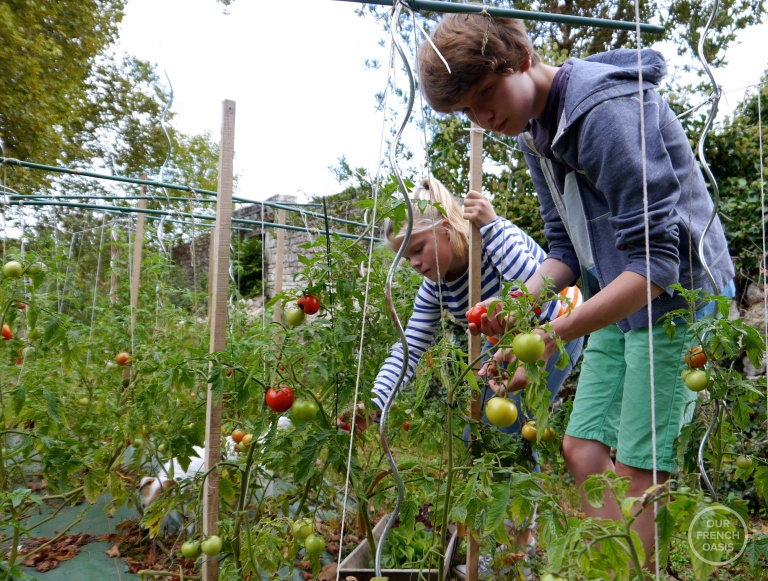 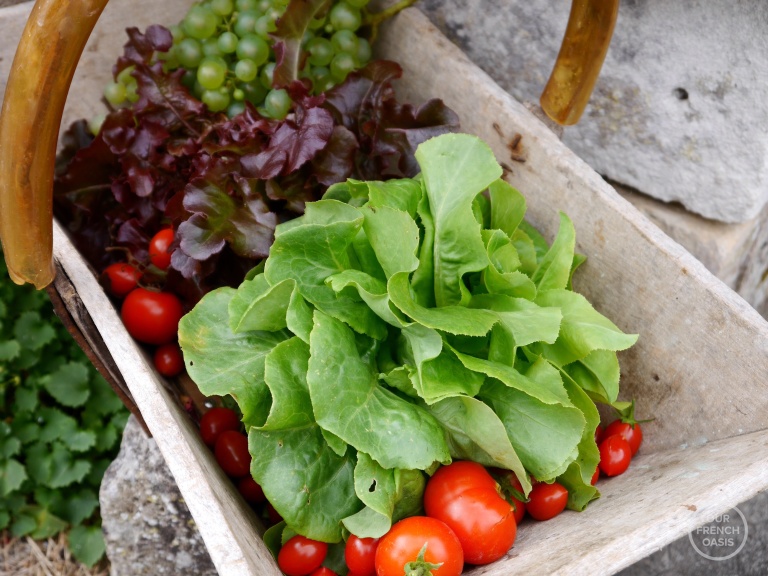 A this point, with the children all excited about tribulations of living off the land, I suggested we should cook one meal that was purely from the garden, just to see how we’d all cope. I don’t think I’d ever done this in its entirety before, of course we’ve had many salads and hot dishes, but not an entire meal with carbohydrates and proteins and absolutely nothing  added. The simple rules meant there could be no bread or pastry, no crusty french baguette, for we don’t grow our own wheat and so do not make our own flour, there could be nothing containing cheese or milk or cream for we have no goats, sheep, or cows. In fact there could not be so much as a teaspoon of anything that didn’t come from our own land. It also had to be something we would all eat and that included the children! 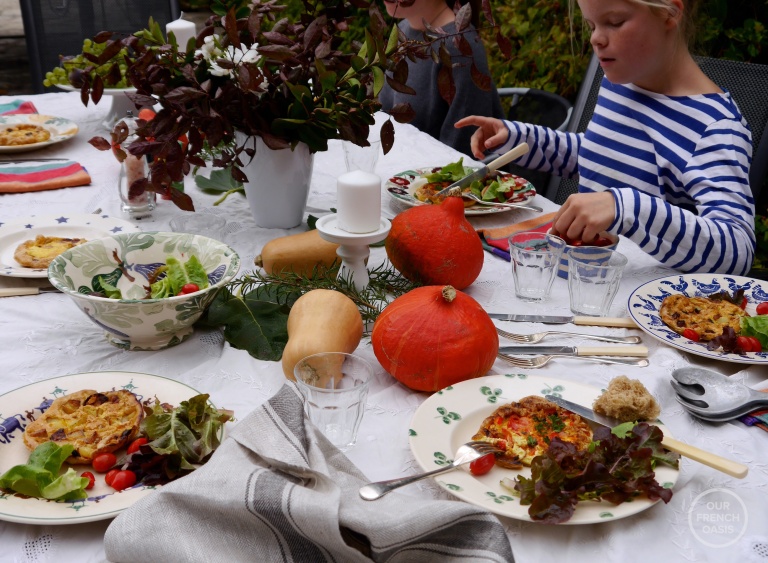 Yesterday was the appointed day, being a Wednesday there is no school in the afternoon and so everyone is at home for lunch. Our days are still deliciously warm and sunny even if the mornings and evenings have developed a slight chill. I decorated our table on the terrace in preparation for our feast from home.

Our menu was very simple, but scrumptious. 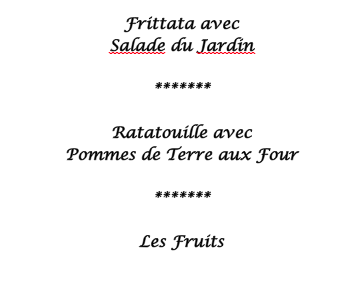 Roddy makes the best frittatas any of us know, and he loves to make them to order in some little green pans he adores for this purpose. Normally we all choose different variations, but this time we were severely limited to what we had in the garden, so the frittatas were simply the base of eggs with the addition of some tomatoes and red peppers, plus a sprinkling of our red chilies which we recently flaked. These were delicious with a fresh green salad of mixed leaves, sliced figs and tomatoes. We were unable to add any sort of dressing as we didn’t have our own ingredients for this but the sweet and juicy figs were a perfect substitute. Another month and we probably could have added a little lemon juice from our lemon trees and walnuts too. 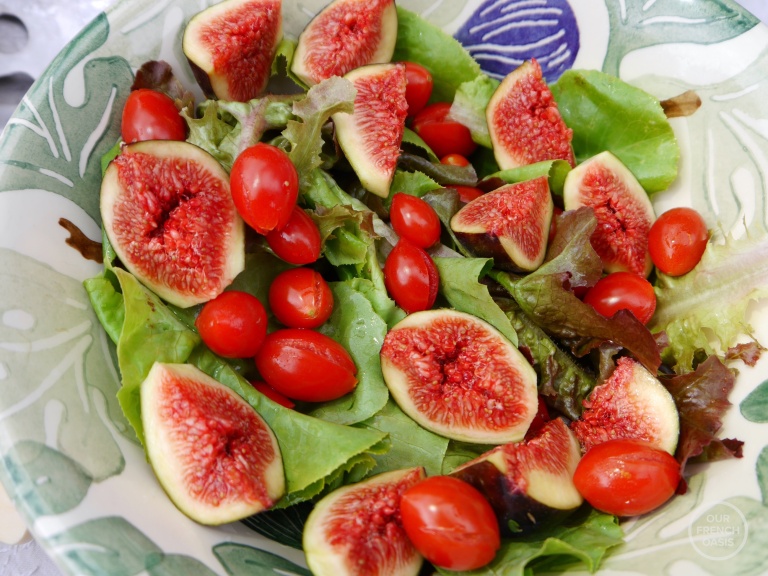 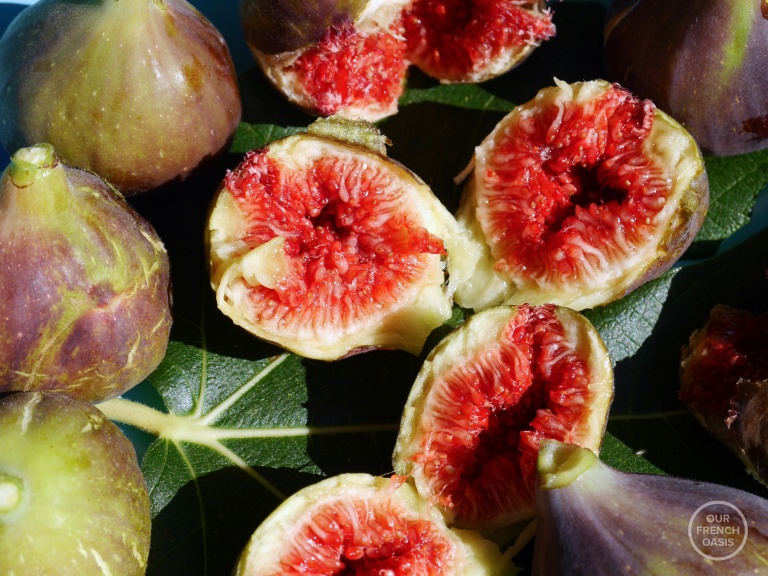 We followed the starter with the last of our potatoes from the garden,

baked in the oven until their skins were thick and crispy, and served them with lashings of thick and tasty ratatouille. We have made this by the bucketload all summer long, freezing huge quantities to take us through the winter, and although Roddy begrudges the fact we didn’t harvest as many yellow courgettes as last year, there are still plenty of greens to go round. We also had some stored onions and garlic which we had harvested in mid-summer and these went into the mix. 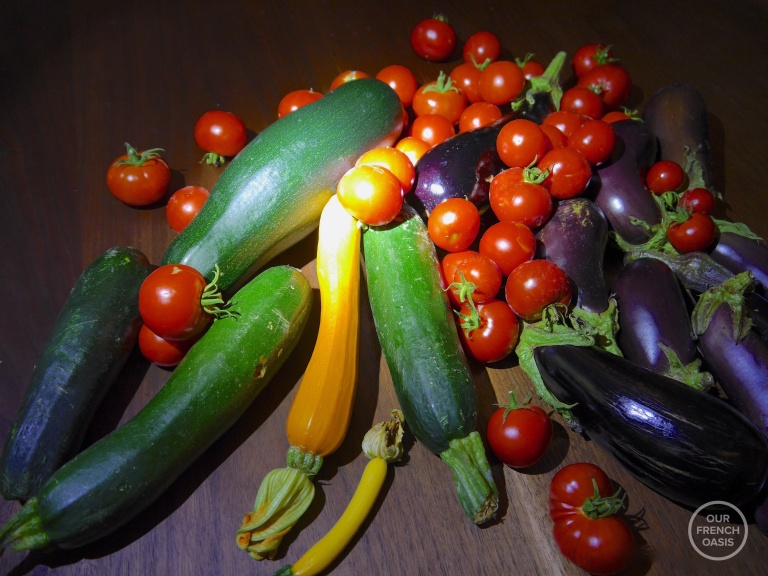 Chop two onions and four cloves of garlic quite coarsely, and fry them gently until soft.

Take 3/4 of your tomatoes and chop them into whatever configuration you wish, and add them to the saucepan. In this case there was about a kilo of them. Cover and simmer for 30 minutes. 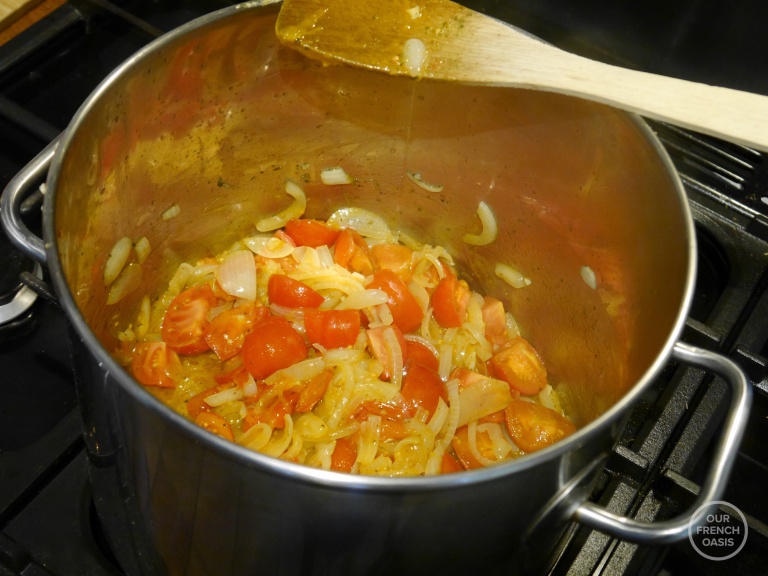 Add a cupful of water, and four chopped courgettes (zucchini) stir in well. Cover and simmer for 10 mins.

Add two chopped aubergines (eggplants), plus your remaining chopped tomatoes and stir in well. Simmer for a further 15 minutes.

Serve in warmed bowls with your favourite accompaniment

Already quite replete and feeling rather content, we rounded this off with some really sweet juicy grapes, freshly picked from the vines. The white grapes are finally getting as sweet as the red, and a fun game is to close your eyes whist someone else pops a grape into your mouth and see if you can tell which is which, for some reason the children love to do this again and again! 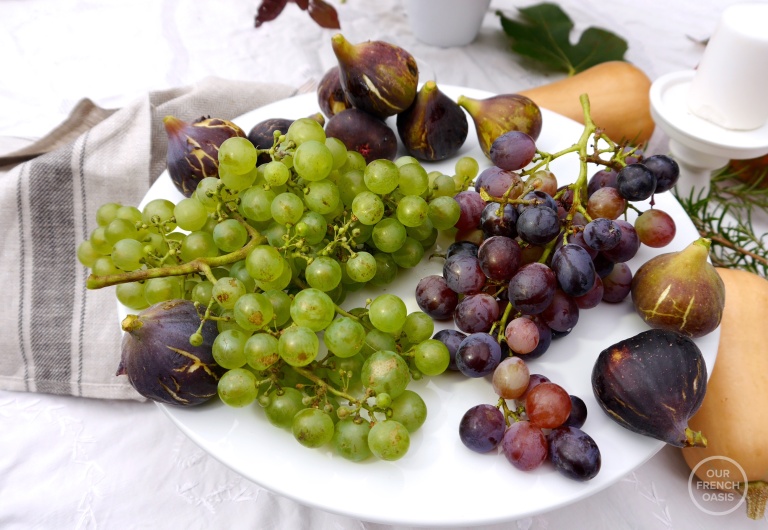 I cannot tell you how proud we all were, we had an enormous feeling of satisfaction and achievement. Afterwards, strangely, there was some animated discussion about adding a goat to our menagerie. But that’s another story that absolutely will NOT happen; but I do know we would probably have to have some milk and cheese if this became a regular occurrence. I kid you not (pun intended!)